I don't quite dress like a metalhead. Never was this more apparent than at Opeth's show at the Sound Academy this week. I showed up wearing heels and flowers in my hair when I should have worn leather. And more black. But you don't have to have long hair and sport a raggedy band tee to appreciate the amount of energy, theatrics and crowd fanaticism involved in any good metal show.

Opeth is the definition of a truly progressive metal act. Frontman Mikael Ã…kerfeldt joined the band during its formation back in 1990 in Stockholm, Sweden. He remains the only original Opeth member, as members Fredrik Ã…kesson, Martin Mendez, Per Wiberg and Martin Axenrot eventually joined the roster over the following years. I had the chance to sit down in the sun with lead guitarist Fredrik on the day of the show for a rundown of things to come. 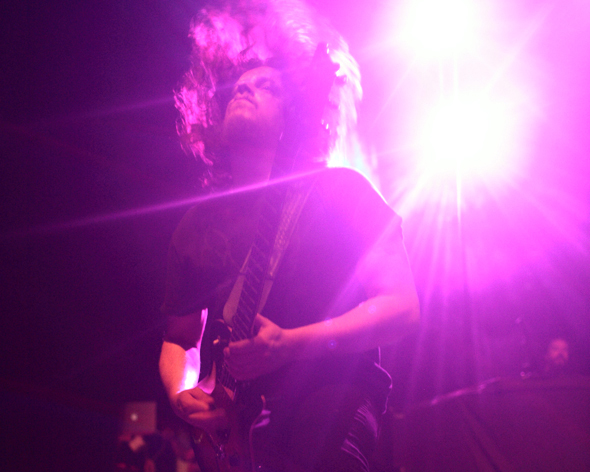 blogTO: How's the Canadian leg of the tour been going so far?

Fredrik: Very good! Canada's always been special for us. I've been here a couple times with my other band, and two times with Opeth and with Arch Enemy as well. The crowds seem to be more intense, more into it.

Any shows that stick out for you on this tour?

We started out in India; we played a gig in Mumbai which was pretty far out. We were in the middle of a jungle and there was a monkey standing outside our doorway. They were crazy - about ten thousand people there. They were totally into it.

I guess you have a big following there.

Yeah, there's a big metal scene there. Someone told me that five million people in India listen to Opeth there, but we only sold, like, two CDs.

Is that your favorite song?

I like the old stuff too. People also go crazy when we play Deliverance. It's hard to play all the tracks, but the old stuff is fun.

Being one of the newer members of the band, do you get much input in the song writing?

A little bit, but Mikael is the real pilot when it comes to writing. We did co-write one song together.

How do you manage keep your sound fresh and exciting?

Well, an advantage for us is that our songs are averaging around ten minutes. So there are a lot of ingredients in each song. It keeps it a bit more interesting than three minute songs.

How are you finding playing with Opeth versus your old band, Arch Enemy?

Well, with Arch Enemy it was, in a way, like playing covers for me. I never recorded with them; I just played the old guy's parts. So I didn't really get to play my style, but I pulled it off.

So, are you finding you get to be more creative with Opeth?

Yeah, absolutely. It's a huge difference because I actually got to record Water Shed before we went on tour. It makes you feel much more involved. It was a great experience playing with Arch Enemy too. It's been more challenging with Opeth. I've been with the band for two years now... and about 200 shows.

What are some of your musical influences?

Basically, I grew up with the new wave of British metal stuff - Judas Priest, Iron Maiden. Later, I got into more 70's metal like Black Sabbath and Deep Purple and all that stuff. I was heavily into Pantera for a while. I like Rush too.

Were there any particular musicians that influenced you for this album?

No, not really. I think it was more when i was young. Now, it's more like you find it in yourself, instead of trying to sound like someone else.

Did you guys have any free time in Toronto?

No we didn't get any time here. I wanted to go up the CN Tower and do some fancy tourist stuff. We're just coming off six gigs in a row. We haven't had much off-time.

Opeth has such a contrast in style, from the very mellow, spacey vibes to the extremely harsh and aggressive riffs. When other bands try that, it doesn't seam to go over well with the fans. Why do you think you guys get away with it when other bands don't?

I don't know. I ask my self that too sometimes. "We need to be more metal!!" (laughs). Maybe its because when we play brutal, we play really brutal. I think maybe your ears get tired if it's just brutal screaming for two hours. If you have the dynamics, when the brutal stuff hits you it's even more powerful. The quieter stuff is also very dark and mysterious. 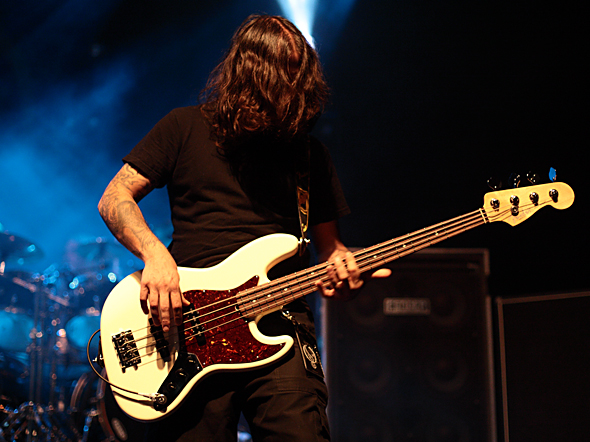 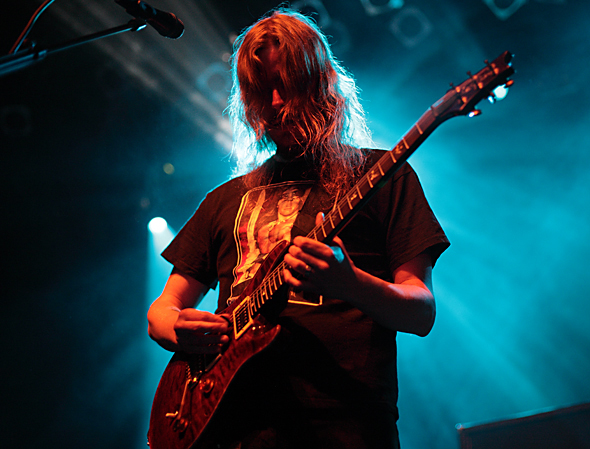 Back to Monday night's show - the guys from Opeth don't disappoint live. According to my photographer (and metal expert) Devin, they never do. The nearly two hour show (preceded by an insane set from Norway's Enslaved) approached a level of epic-ness, with material spanning the band's long history. Don't let it be said that Opeth has no sense of humour: in between those 10 minute songs, they initiated a Summer of '69 sing-along.

The tour continues on with a number of stops throughout the US. A little bit of insider info from Fredrik: look for even bigger things to come from Opeth next year as part of their 30th anniversary. 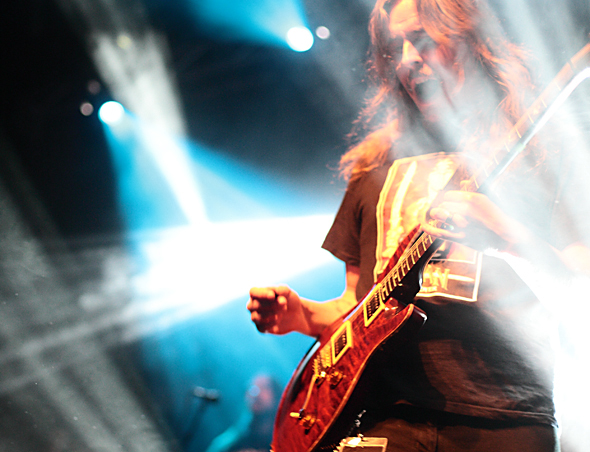 All photos by Devin Doucette.