Is the End Near for Toronto Record Stores?

The last time we moved, I had twenty boxes of CDs, and I vowed as I humped them up two flights of stairs that I'd never move them again. We take possession of our first house in two weeks, so I've been trying to dispose of the last of the CD and vinyl collection I've been slowly evaporating for several years, which by now has been distilled down to its most obscure and esoteric remainders.

Toronto has always been a good city for record shops, even now in the digital era, when it's the big chain stores that seem to be suffering more than the independent new and used shops that dot the city. Disposing of most of what remains of my own CD and LP collection has made me start wondering what the city - or any city - will be like in an age, probably not too far from now, when record stores begin to disappear from the urban landscape.

It was record stores that first lured me downtown weekly from the suburb where I grew up, and certain locations - a long-gone doorway near the western end of Holt Renfrew on Bloor, a spot just by the northwest corner of Yonge and Dundas, a pricey eatery called George on Queen East - will always be associated with Round Records, Records On Wheels and the original Record Peddler, all long-gone, though branches of Wheels apparently still survive in Sudbury and Dundas.

Even more than bars or clubs, record stores became a second home, which adds three more locations to my personal record store deadpool - Driftwood, Republic Records and the nearby Queen and Spadina branch of Vortex, all of which employed or were owned by friends, neighbours and roommates. Spending as much time as I did in record shops probably accounted for the monstrous state of my record collection when my wife met me, though I don't regret a thing. Collecting music is just about the most harmless hobby a single man can have, though I can't help but envy anyone beginning their collection now, which can be guiltlessly stored on a hard drive the size of a paperback book, and not on imposing walls of shelves, or rickety monoliths built from milk crates that were kryptonite to all but the most bohemian of prospective girlfriends. 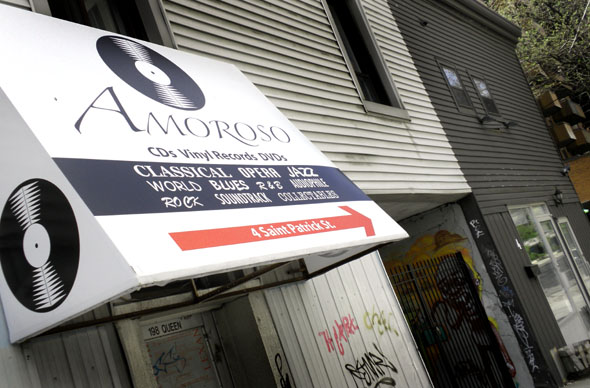 I've been disposing of the remnants of my CDs and LPs at Amoroso Music on St. Patrick, who've been more than happy to take care of the unwieldy mix of classical, jazz, experimental and easy listening records that have been left above the high water mark of previous liquidations. The changes in the used music market are truly wondrous - LPs, which were once considered obsolete junk during the golden age of the CD, are back in fashion, and vinyl that I was once lucky to unload for fifty cents now has resale value, adjusted for inflation, almost identical to what I paid for it, many years ago.

LPs have become rare, and may one day be a specialized collectible medium, like 78rpm discs and Edison cylinders. CDs are still common, though jazz and classical - still desirable to older collectors and audiophiles - command better prices than the pop and rock discs that went for as little as the LPs I had a hard time unloading back in the '90s. The record industry is pressing fewer of them, though, which brings to mind some sort of variation of "peak oil," where CDs will eventually become scarce, increasing in value and rarity after the bulk of them disappear into landfill.

It's a collector's market, though, catered to by websites and boutique stores with mail order operations - in Toronto, Soundscapes is probably the harbinger of this new model. In time record stores will join other genres of shops that have either vanished from the urban landscape or evolved into high end retail - equestrian supplies, men's tailors, bookbinders, shoemakers, milliners and Chinese laundries. Anyone who's lived on or near old north-south streets like Sorauren or Dovercourt can recognize the onetime groceries, fruit stands and butcher shops that used to cluster around every other corner, remnants of a time before car ownership or reliable refrigeration, when food shopping was a daily, not weekly, chore. I can imagine a day when almost every record shop will join that legion of retail ghosts all around the city, all phantoms of vanished technologies.