Yesterday it was nothing but summer music festival fun in the sun at Fort York, at the inaugural Rogers Picnic. The sky was clear, the beer flowing, and the grounds packed.

Performances included The Roots, Bedouin Soundclash, Bad Brains, Little Brother, Apostle of Hustle, Tegan and Sara, The New Pornographers, The Dears, and were bridged by Team Canada DJs and a special guest DJ set by Maseo of De La Soul.

Continue reading for reviews by blogTO's Kevin Au and Jonathan Rothman of selected performances, and to check out photos galore... 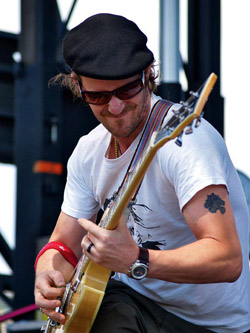 In contrast to their album, Apostle of Hustle's live act is a 3-piece affair with a strictly minimalist take on the studio cuts. AoH opened with their title track, The National Anthem of Nowhere. The music lacked the dense soundscape of the album, but that playful intricacy was replaced with a raw energy that coursed through the music. The second song revisited an old favorite, Energy of Death, from their Folkloric Feel debut. Whiteman took some time aside to explain that this particular song was written for all those people who have glowsticks, furry leg warmers, and pacifiers tucked away in their closet from times past. For their third song, AoH skipped to one of their Spanish-inspired instrumental numbers, Fast Pony for Victor Jara. Whiteman explained that the crowd should have the following mental image for this song: The Canadian Mountie, a young boy in a red suit 17-years old, gets on his buffalo to catch his man, then reaches into his pockets and finds an ounce of BC hydro in one and a container of the finest LSD from Ottawa in the other, an equal opportunist, he takes the drugs and rides into the prairies with a 360-degree Hollywood blockbuster shot, he holds the severed head of George Bush in one hand, and Stephen Harper's in the other... and that's just about as weird as it gets. The last song was Haul Away, which ended the set at a paltry 30 minutes and 5 songs. It's a shame AoH got stuck with the opening and shortest set, but what a way to start the picnic! 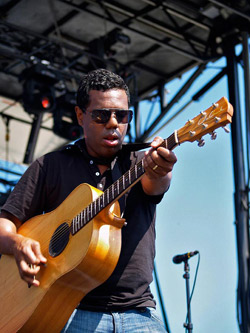 I saw The Dears two Canada Days ago at the Harbourfront Centre. Maybe outdoor venues just aren't their thing, but the levels were way off from where I was standing. Murray Lightburn's vocals were muddy, and neither Valerie Jodoin-Keaton's nor Natalia Yanchak's keys were making an impact. They powered through a bunch of new material from their Polaris-nominated Gang of Losers, including Death or Life We Want You, Whites Only Party, Bandwagoneers, and There Goes My Outfit. Despite the coarse leveling, there were moments when the music shined with some truly great summer concert moments, especially for back-catalogue crowd-pleasers like 22: The Death of All Romance.

As Kathryn Calder was apt to point out, the New Pornographers sure have a way of performing in Toronto in extreme conditions. The last time they were here, it was one of the coldest nights during Winterfest 2007. The sun was beating down on us all day and I was actually starting to feel a bit like baked food. They kicked things off in good fashion with All the Things That Go to Make Heaven and Earth from Challengers (their upcoming release). It's the only track on the new album that sounds familiar to long-time NP fans. They quickly moved into some older material, like Use It from Twin Cinema and The Laws have Changed from Electric Version. All were faithful but punctuated versions of their album counterparts. I couldn't help but notice that Kathryn Calder (Her band, Immaculate Machine, is playing this Wednesday at the Horseshoe) is really starting to show promise as a staple of their live shows, since Neko Case started focusing on her solo work. A fiery rendition of Mass Romantic set the crowd abuzz before the Pornos played a few new songs like My Rights Versus Yours and Mutiny, I Promise You. The new album is full of laid-back tracks that prove the musical idea that less can be more. Though the New Pornographers are best known for blasting a song full-tilt, there is a lot of depth to AC Newman's writing that only appears in his quieter arrangements. They closed the set with two songs from Twin Cinema: Sing Me Spanish Techno and Bleeding Heart Show. With four full-length albums under their belt, the New Pornographers now have a great breadth of material to wow their fans from song to song. I was very impressed with their set, and hope to see them here when they tour Challengers later this year. 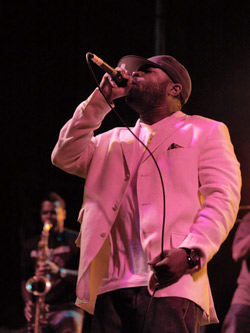 Sly and the Family Stone's "Family Affair" might have better characterized this show, but early on, it was MC Black Thought bringing "Everybody Is A Star" alongside Gang Starr references that kept things simmering. Long-time bass player Leon "Hub" Hubbard's slapping, chunky eight-minute solo and guest appearances from De La Soul's Posdnuous and Maseo and from Lupe Fiasco made the Legendary Roots Crew's 70-minutes-plus performance a mixed bag, but one full of treats.

Once chanting "De La" through that duo's appearance was out of the way, though, the variety show vibe maintained with the focus back on hip-hop's reigning live band. Tracks from 2006's Game Theory came front and center - the soulful "Don't Feel Right", "Long Time", "Here I Come" and that disc's title track - played with a few additions from Phrenology ("Seed"), The Tipping Point ("Star", fast-rapping "Web", "Don't Say Nuthin'"), Things Fall Apart ("Love of My Life", "Next Movement; both briefly) and even the concert disc Come Alive ("Proceed", "Mellow My Man"). The crowd seemed supportive, but ready for the day to be over.

Ad-libbed shout outs to Toronto, De La and Fiasco, like guitarist Craig Douglas' brief caterwaul through "Don't Feel Right", earned its applause, but true to the night's mix-tape vibe - now we play this, now we play that; no staying with one song or groove for too long - a 10-minute exploration of "Jungle Boogie" proved just as much the crowd-pleaser. With the horn trio blasting the audience from the edge of the stage and a drum solo dropped in (?uestlove never made it to town, apparently), that cover was no exercise in time-killing. 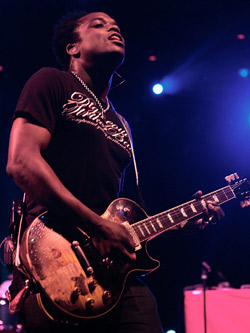 The closer medley of "Seed" and "I Can Understand," featuring the night's strongest back-and-forth chanting between Roots crew and audience, delivered a punchy finale worthy of the legendary mantle.

It would have been nice to hear a little more cohesion to the set as a whole, but as far as full-band hip-hop shows go, we're not worthy. The Roots brought Toronto some much-needed Philly-style rhythm, rhyme and down-home party beats. And, as much as heavy-hitting guests like De La and Fiasco collaborating on Roots tracks would have been a super-special experience, at least they showed up and cut up their contributions to the soul stew.

Check out photos of all the performers in the slideshow below.

All photography by Jerrold Litwinenko.