Indie Showcases are a Two-Way Street

A deluge of indie music awaits the avid concert-goer in Toronto this summer. To our good fortune, there are guiding hands to help sift through the flotsam. The Two Way Monologues Showcase is a sapling among local mainstays like Wavelength, All Caps, and Pitter Patter. With just 1 show under his belt, I spoke with TWN founder Dan Wolovick to explore the rewards and hazards of promoting independent shows in Toronto.

K: Can you tell me a briefly about the history of Two Way Monologues, and how it spawned the TWM Showcase series?

D: I started writing TWM as a blog in London, at a time where I was spending ridiculous amounts of money on music and I wanted a forum to speak about it. I'd just bought the Sondre Lerche record, and that song was stuck in my brain, so when I needed a name it just fit. After a while, other people wanted to participate and the blog format didn't fit what we were doing. So a few of my friends helped put together the site you see now, which allowed TWM to grow. We have 11 people writing for the site, with daily updates, more features and other neat things in the pipeline.

As for the Showcase series: we were covering CMW, and I was spending too much time covering music by bands--largely American bands--that are just never going to play here. There is value there, but while I was covering those artists I was missing out on tons of high-quality local stuff. So I decided to start the series. It's an amazing way to get the word out about TWM while bringing attention to some of my favourite local bands, and I think it really adds a new dimension to what we are doing at the site. I've always been that guy who could ramble on for hours about what new bands my friends need to check out; this is just an extension--albeit a large one--of that.

K: How successful do you feel the first showcase was, and what do you expect from this Friday's sequel?

D: The first showcase was an off-the-charts success. The pictures don't do it justice, because at one point I wasn't sure that we could fit anyone else in. Credit goes out to the bands that helped to draw a crowd. With that first show you can also call in a lot of favours to fill the audience. This Friday, I'd love it if we carried that momentum. I doubt we'll see any impromptu mosh pits breaking out, but that's mainly because The Coast Guard, Charlemagne and Mariposa are not those types of bands. I just hope everyone has a great time and appreciates the effort of putting together a line-up that should flow well, and that I'll see some of the same faces that I saw at #1 and hopefully again at #3.

K: Why did you settle on Rancho Relaxo as the venue? Does it meet or exceed your expectations for a music venue?

D: I just love the Rancho Relaxo. There's plenty of seating, lots of room for those who want to drift back and talk and drink by the bar, and space for a fierce floor crowd. If only there was a logical spot to set up a merch table! When I was scouting venues for the showcase, my main criteria were: size, location and sound quality. Donnie Blais is great and gave me a chance, even though he had no reason to believe that I knew what I was doing. You can fit a lot more people in that place then you'd think, and that's a good thing too, or we would have been turning people away at the door in May. I considered having the showcases rotate from venue to venue, but for now I'm content. There's something to be said for continuity, and this way people know where to find us.

K: How does the TWM Showcase series stack up against other indie showcases in the city? What sets TWM's showcase apart?

D: Right now what sets us apart is that we are not nearly as established. Series like Wavelength and All Caps are a large reason why I decided to start the TWM Showcases in the first place. I aspire to get to the point where when people hear a TWM Showcase is coming up, they just automatically assume we'll be putting a quality line-up on the stage. That's very much how it is with 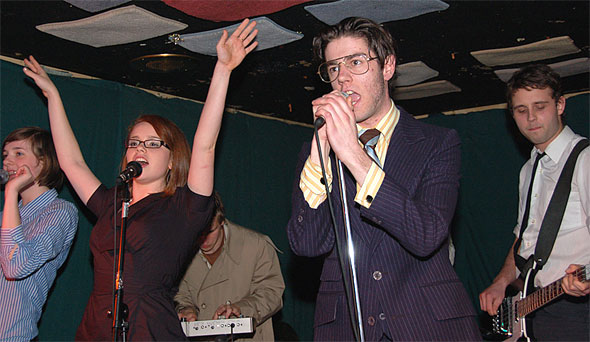 Wavelength, All Caps and Pitter Patter nights at the Boat. What is different about TWM is that we are a full-blown music review website. I will never put a band on a TWM showcase that I can't completely support. It doesn't mean everyone will like all of the bands, but it's an indication of quality control. These showcases are very much a preview of what you might find out about if you read our website. Writing reviews is really sheltered, so in a sense this is also a chance to put my money where my mouth is and let us be criticized for a change.

K: Aside from your immediate friends, do you find it discouraging to promote indie music to the masses of uninitiated listeners?

D: At times I would even include my immediate friends in the "discouraging" segment. It's easy to get stuck in a musical rut and just listen to any music that comes along and fits comfortably. It takes a lot less effort, and comes with significantly less frustration. So when some random guy starts telling you to set aside a Friday night to check out his website's showcase on Facebook, it's not always met with open arms. But the beauty of indie music is that once you do get someone initiated, they tend to be intensely loyal. I just wish more people were open to giving it a shot.

K: Among the various indie promotional channels (e.g., blogs, Facebook, word-of-mouth), what do you feel is the most effective method and why?

D: So far it has easily been Facebook. On Facebook I can find people who are indicating that they have an interest in indie music through their profile. So at least you aren't going to get the proverbial door slammed on you as you step in. Mind you, Facebook itself doesn't take too kindly to using the site for promotion, so you have to be careful. I still believe in the old-school method of postering, and on that note we have a stellar artist and good friend of mine, Cam Tomsett putting together seriously creative posters (this showcase we are rockin' a Pac-Man theme). But unfortunately, with all the postering agencies now, their lifespan is short no matter how often I go out and replace them.

K: Describe the biggest trend you've seen in the Toronto indie scene for 2007?

D: Not that this is a brand new trend, but it is just becoming increasingly prevalent: massive-sized bands. So many bands now are jamming eight, nine or ten people onto the smallest of Toronto stages. Personally, I'm all for this trend, as some of the best Toronto bands--Foxfire Forest, The Ghost is Dancing, Entire Cities and Rock Plaza Central--put on absolutely amazing shows largely because of the unexpected instruments, multiple vocalists and sheer power from playing with that large a band. The flip side of that trend is giant bands for the sake of being a giant band, and that is also definitely happening in Toronto right now. You see a band like the Sunparlour Players just blow you away with three people, and then wonder why exactly some other bands that have 8+ members can't duplicate that.

K: Thanks for your thoughts, Dan, and all the best with the TWM Showcases to come.

Two Way Monologues Showcase #2 is this Friday (July 13) at Rancho Relaxo. Doors open at 9 PM, and Cover is $5. Bands playing are: Mariposa, Charlemagne, and The Coast Guard. Photos of The Barons and Foxfire Forest by Kyle Rea.