Park Hyatt Toronto is currently open but their offerings and services may be affected due to the pandemic. Please contact the business directly for more information about any changes. Is this your business? Please contact us if you would like to update this message.

Park Hyatt in Toronto comes with more than 80 years of history – the hotel has sat on the northwest corner of Bloor Street and Avenue Road since 1936, first as the Park Plaza Hotel and then Park Hyatt since 1999.

Nearly four years of renovations of the Art Deco hotel means 219 redone rooms, including 40 suites, a brand new restaurant, as well as a facelift to the 17th-floor cocktail lounge with an iconic status. 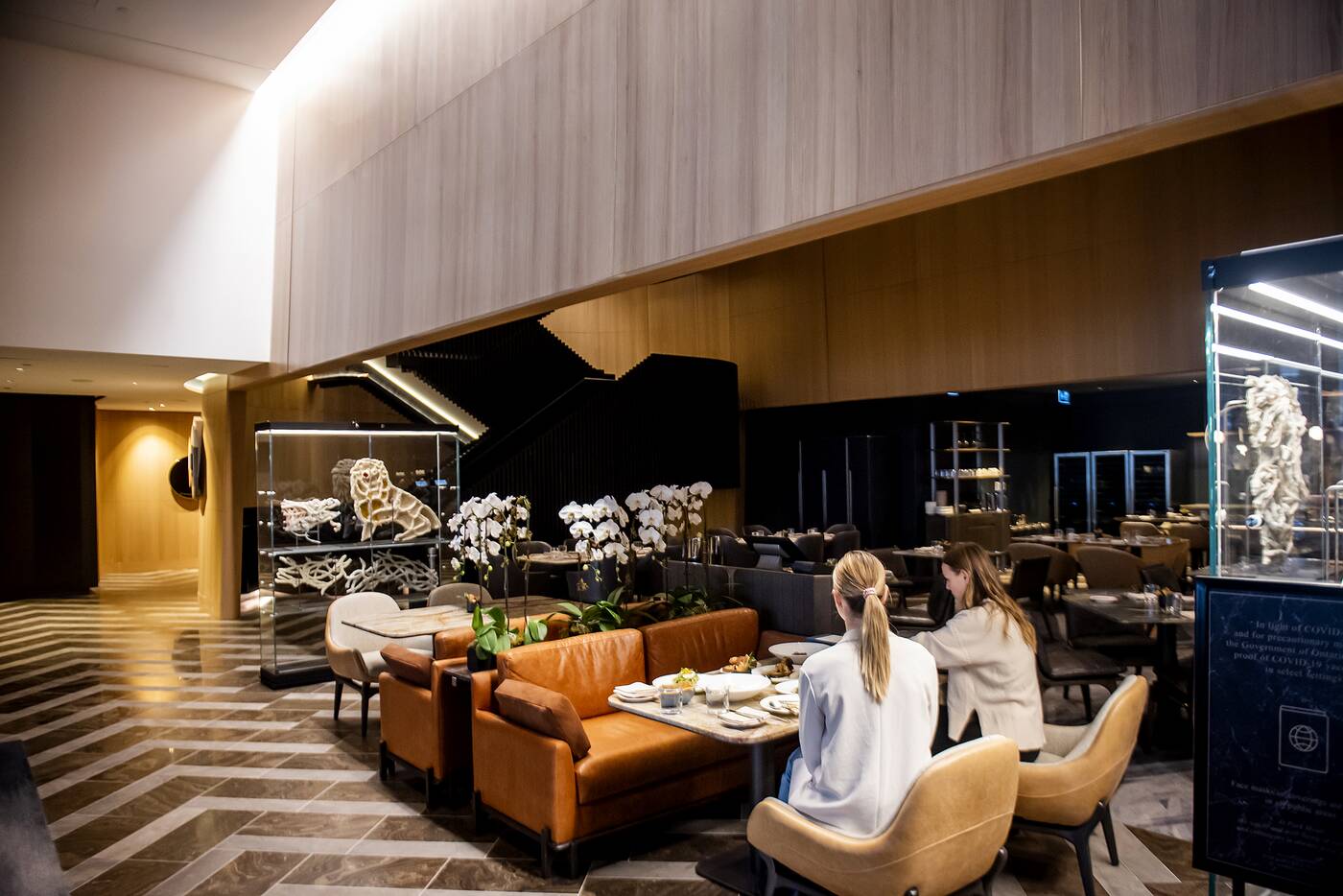 The space is full of natural colours evocative of the surrounding natural landscape and pieces of art, including a massive, handwoven tapestry by Canadian artist Shannon Bool in the lobby and a rotating curation of sculptures from Gardiner Museum in the main floor dining room. 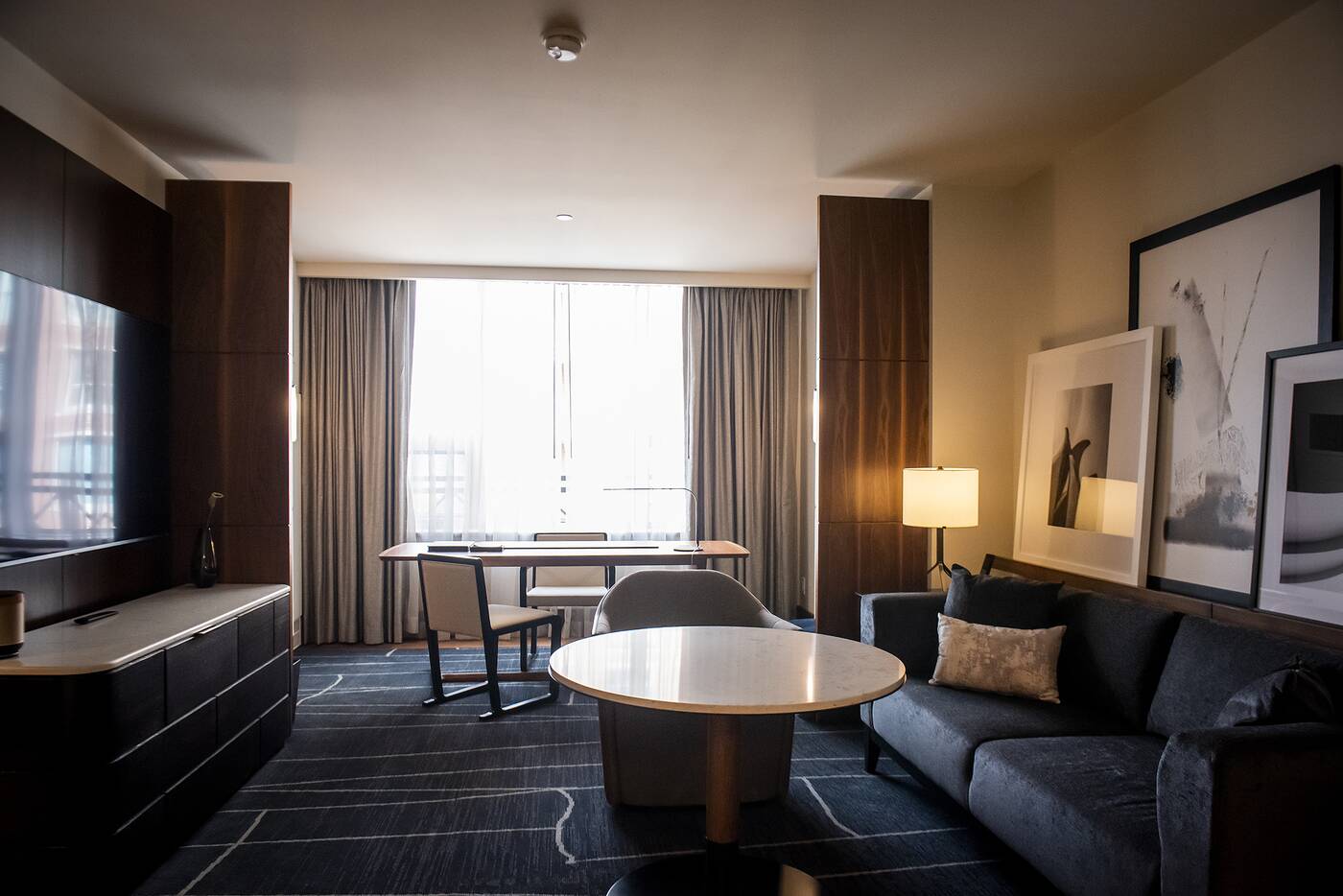 All of the rooms and suites, which each come with blackout curtains and Nespresso coffee machines, have also been done over. The 850-square-foot one-bedroom deluxe corner suite is among the mid-sized suites – the largest presidential is more than double its size. 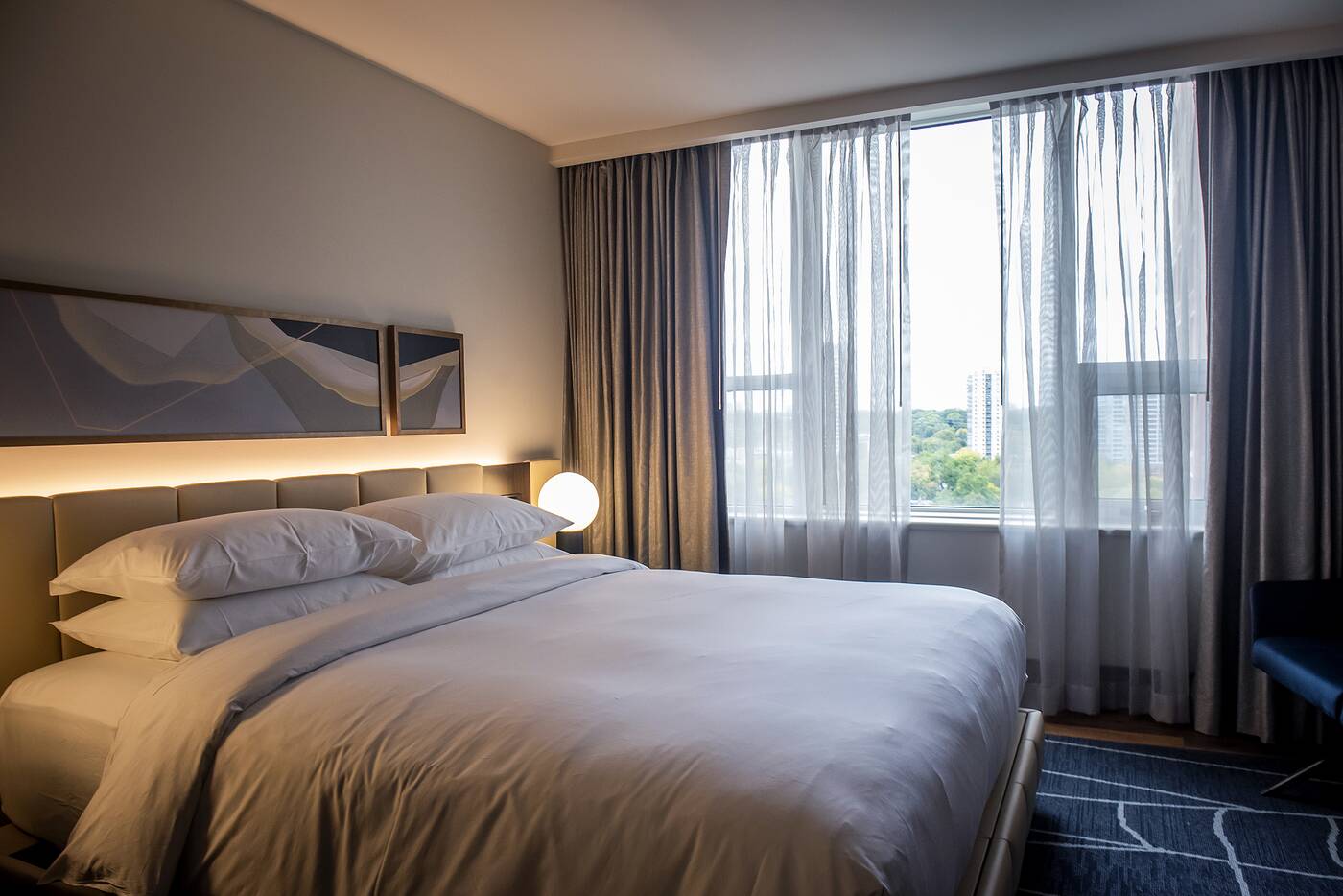 You'll be paying for a living room and fully loaded pantry area and private mini bar (think every alcohol and snack you'd ever need), as well as a king-sized bed complete with floor lights in the bedroom. 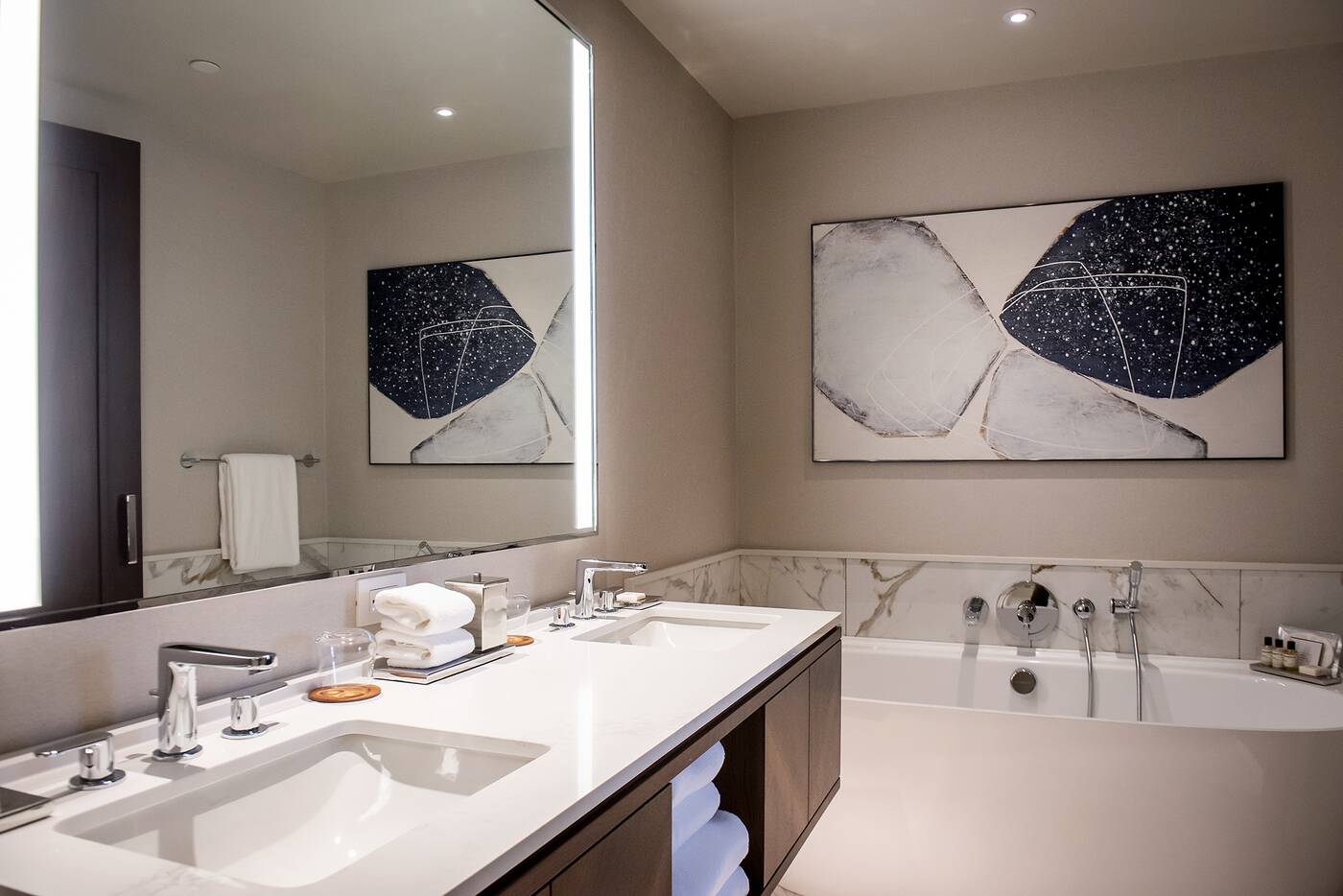 There are two washrooms, one is a half-bath while the second comes with a soaker tub, double sinks, walk-in rain shower and a separate vanity area. 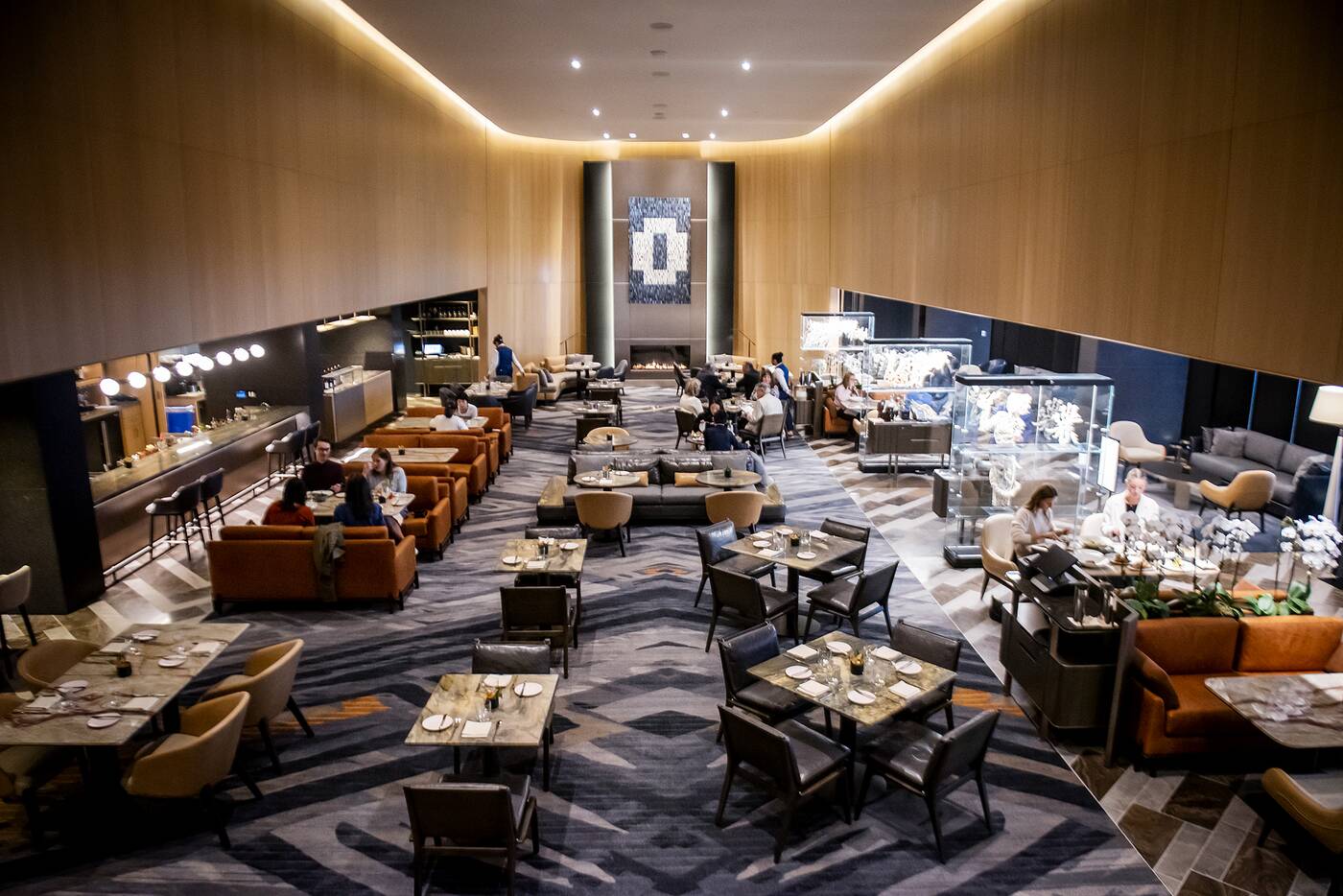 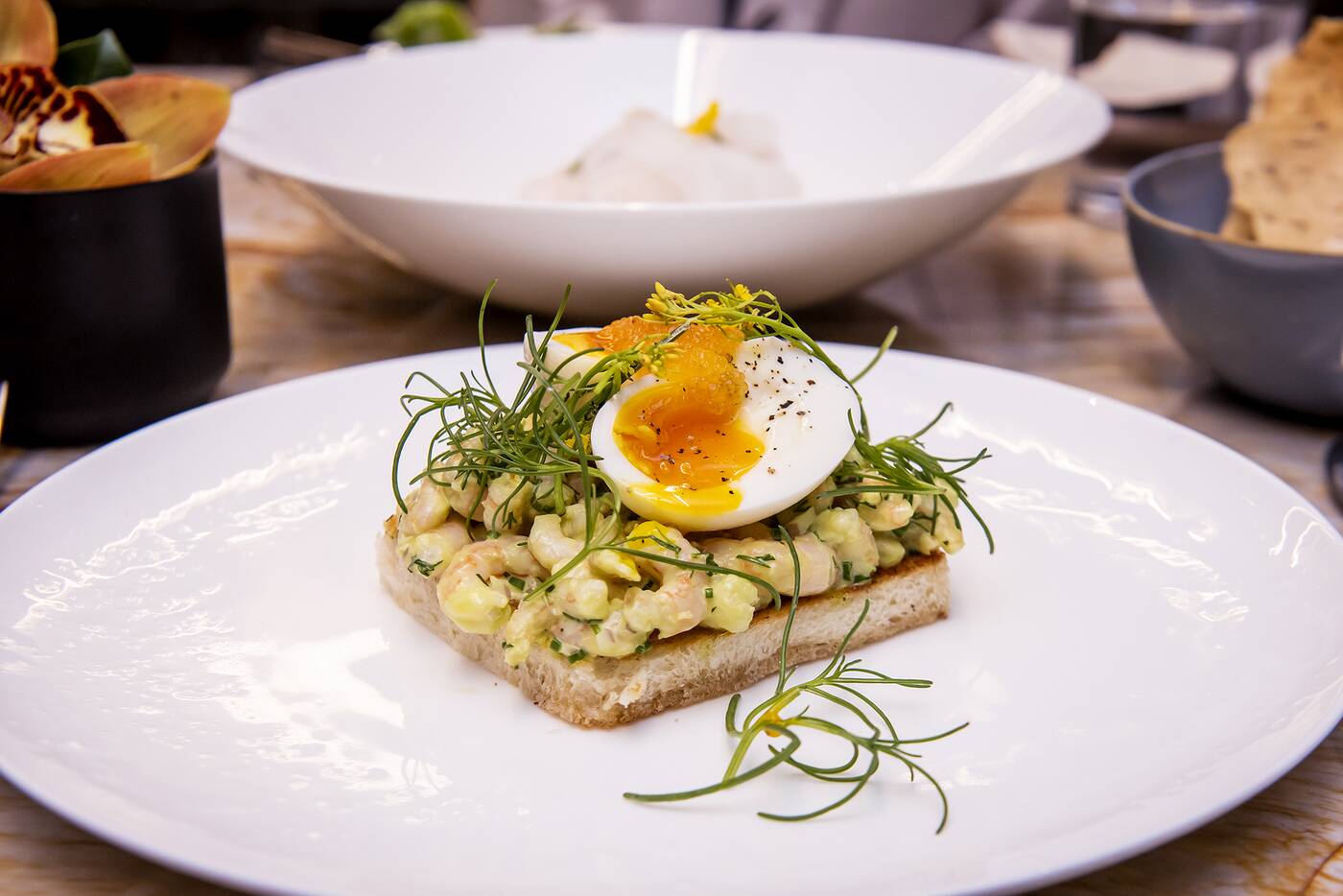 Whenever possible, Soriano uses local Canadian suppliers with lamb coming from Tamarack Farms in Ontario, freshly milled flour from Brodflour here in Toronto, and the shrimp all the way from Newfoundland for the tartine ($23). Homemade brioche is the base. 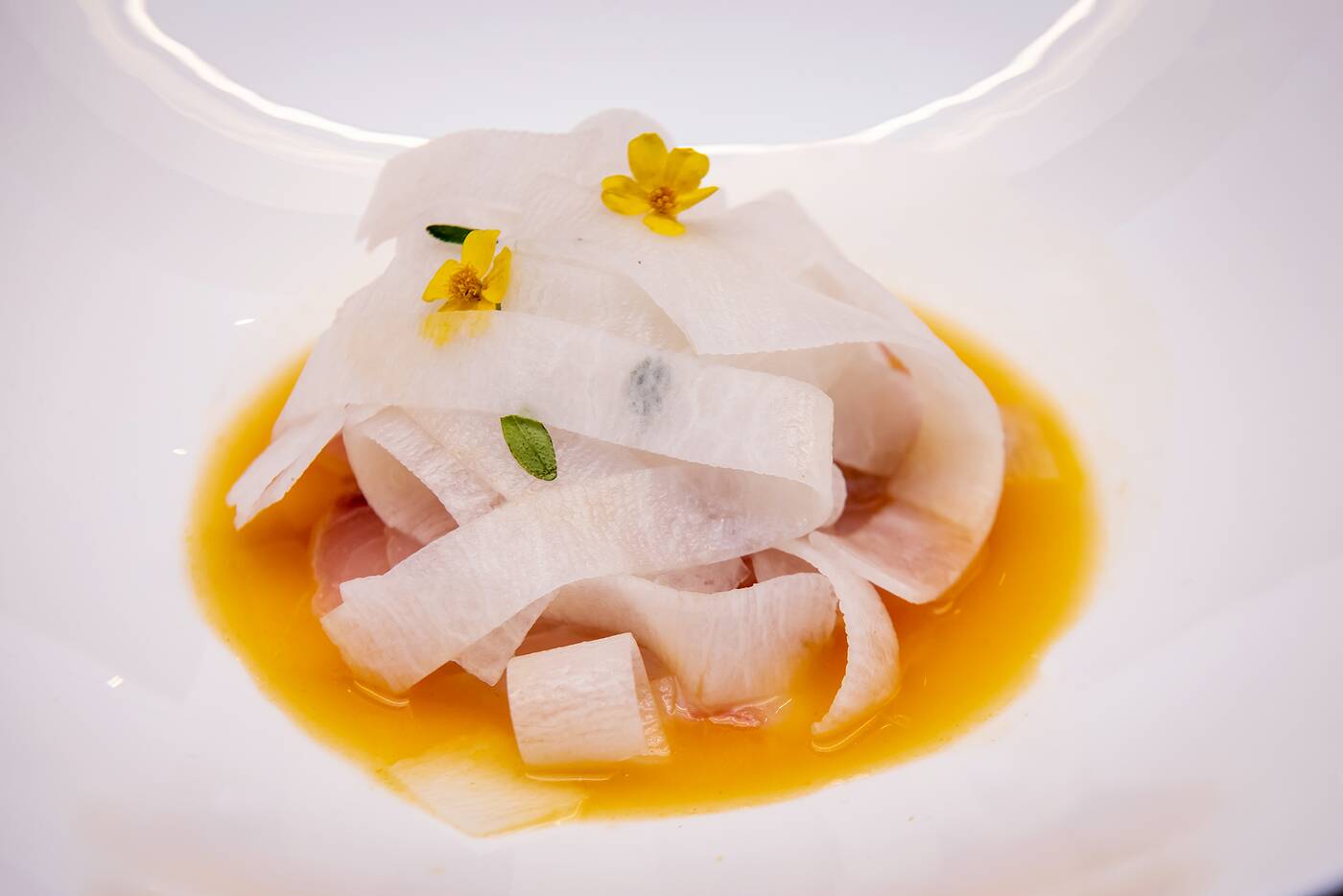 The Hawaiian Kanpachi ($24) is sustainably sourced from the coasts of Kona. The yellowtail fish is dry-aged for a week and comes in an acidic juice made from sea buckthorn berries. Even the tiny kinome leaves on top pack a tremendous amount of flavour and a lingering heat. 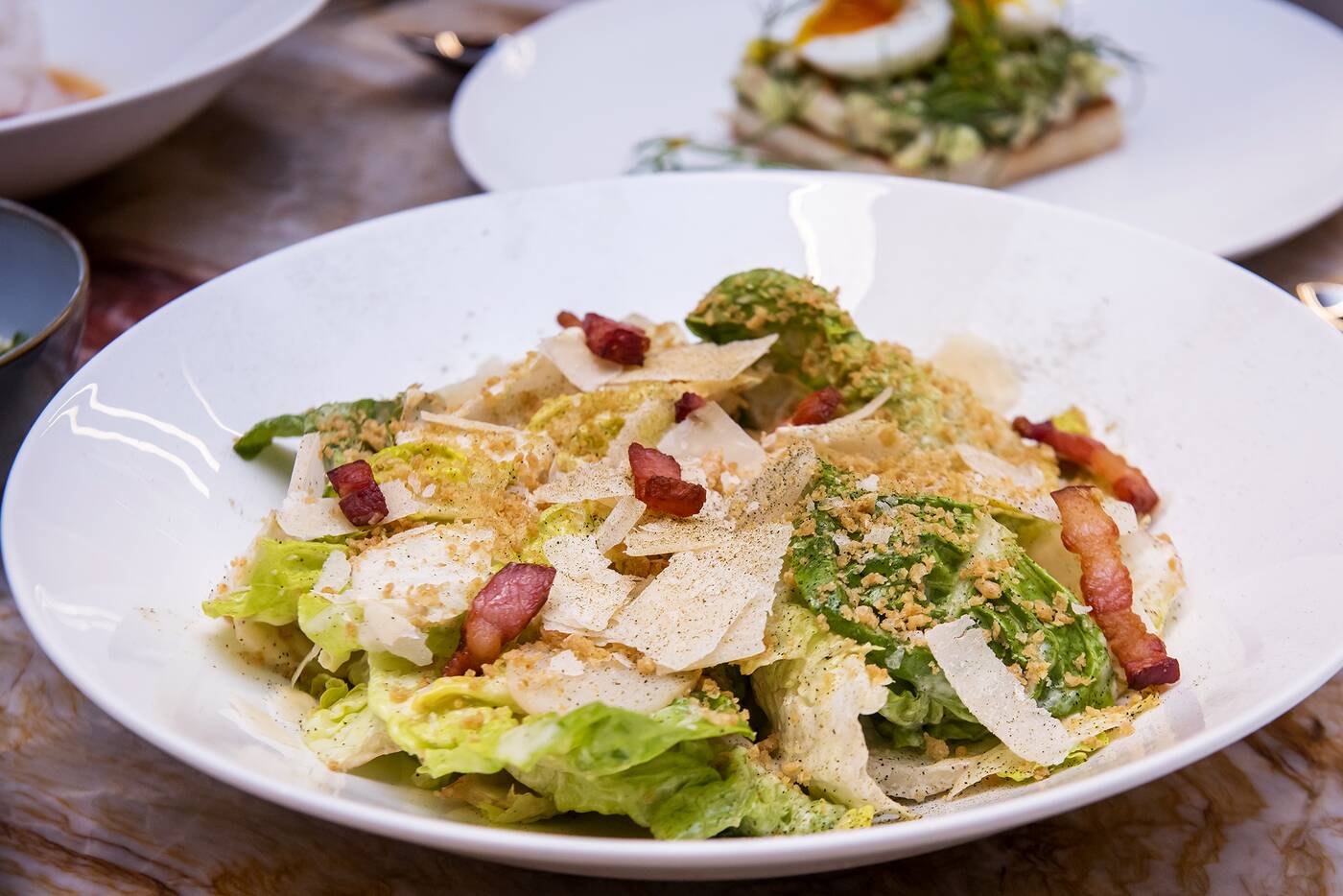 The Park Caeser ($23) is much lighter than your regular Caeser salad and gets confit pork belly (also sourced from Tamarack Farms) and umami croutons. 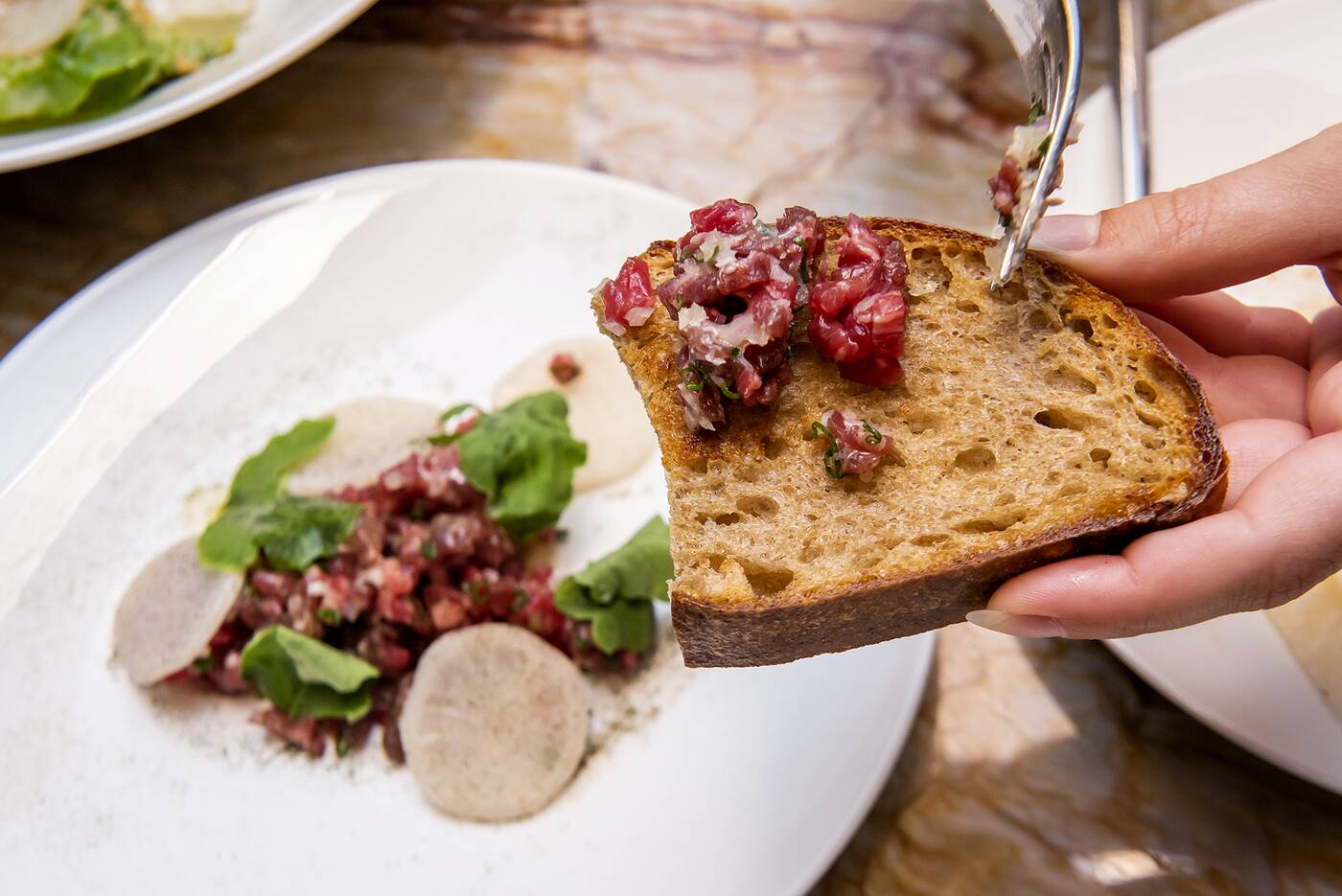 Beef tartare ($25) is done a bit differently here with fermented Japanese turnips in place of the usual egg yolk and the addition of brown butter. Homemade sourdough is served on the side. 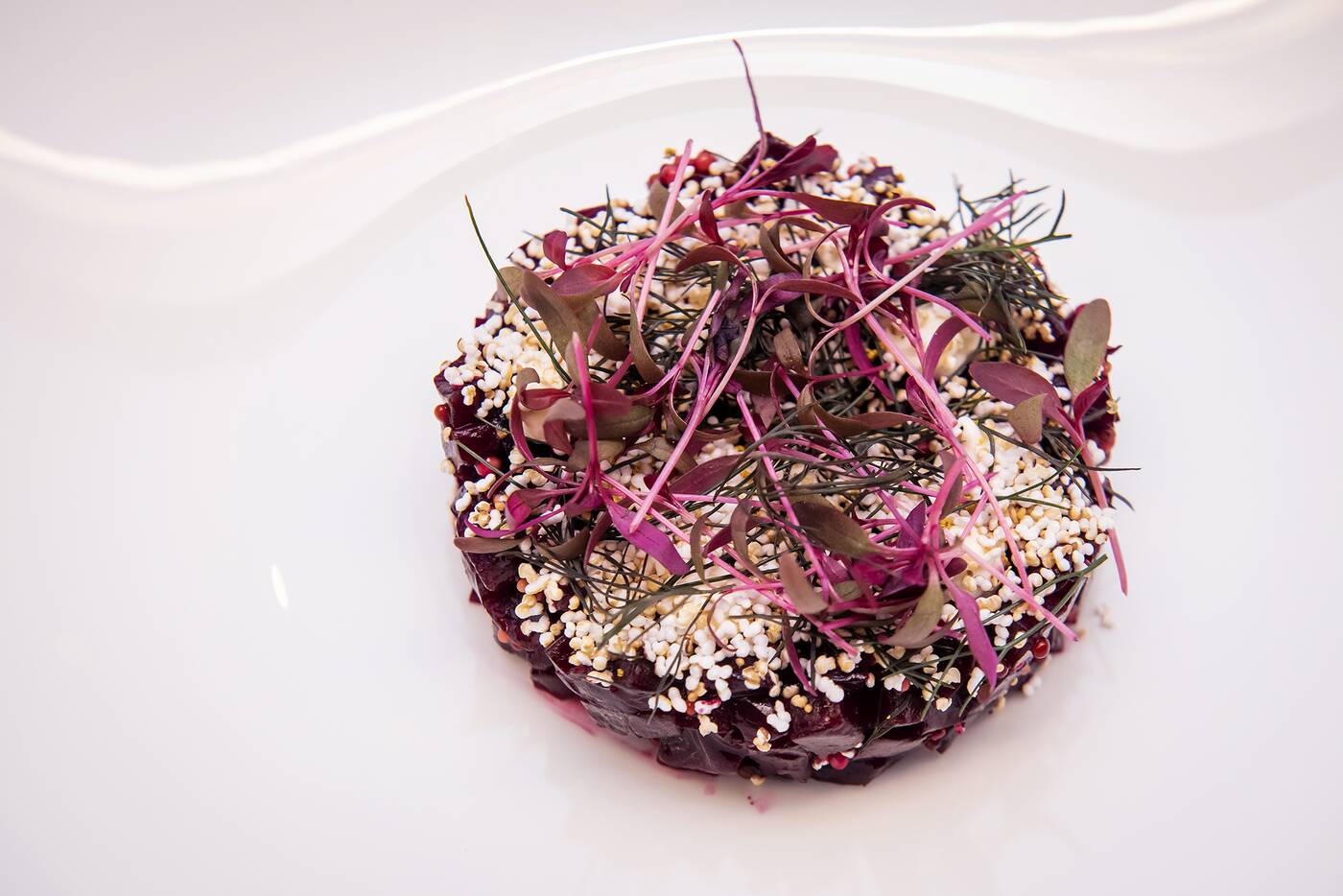 If raw meat isn't your thing, the smoked beet tartare ($19) is a just as flavourful vegetarian replacement. Amaranth seeds from perennial plants and crème Fraiche help to balance the earthy taste of the beets. 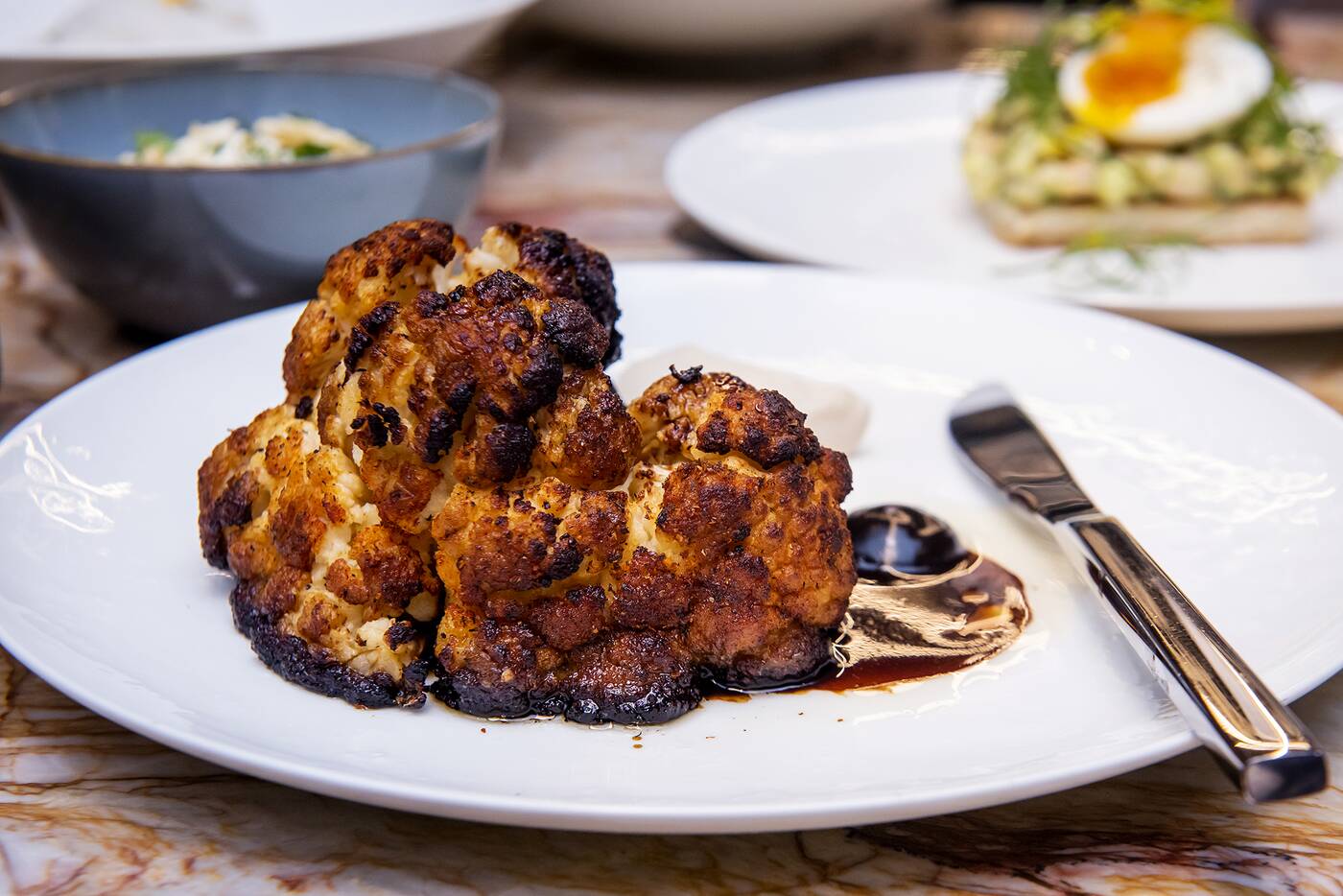 The roasted cauliflower ($29) with Montreal steak spice and a side of quinoa and apples, is Soriano's vegetarian take on steak and salad. A mix of the spice and mushroom ketchup over the cauliflower produces a sauce like beef au jus, just without the beef. 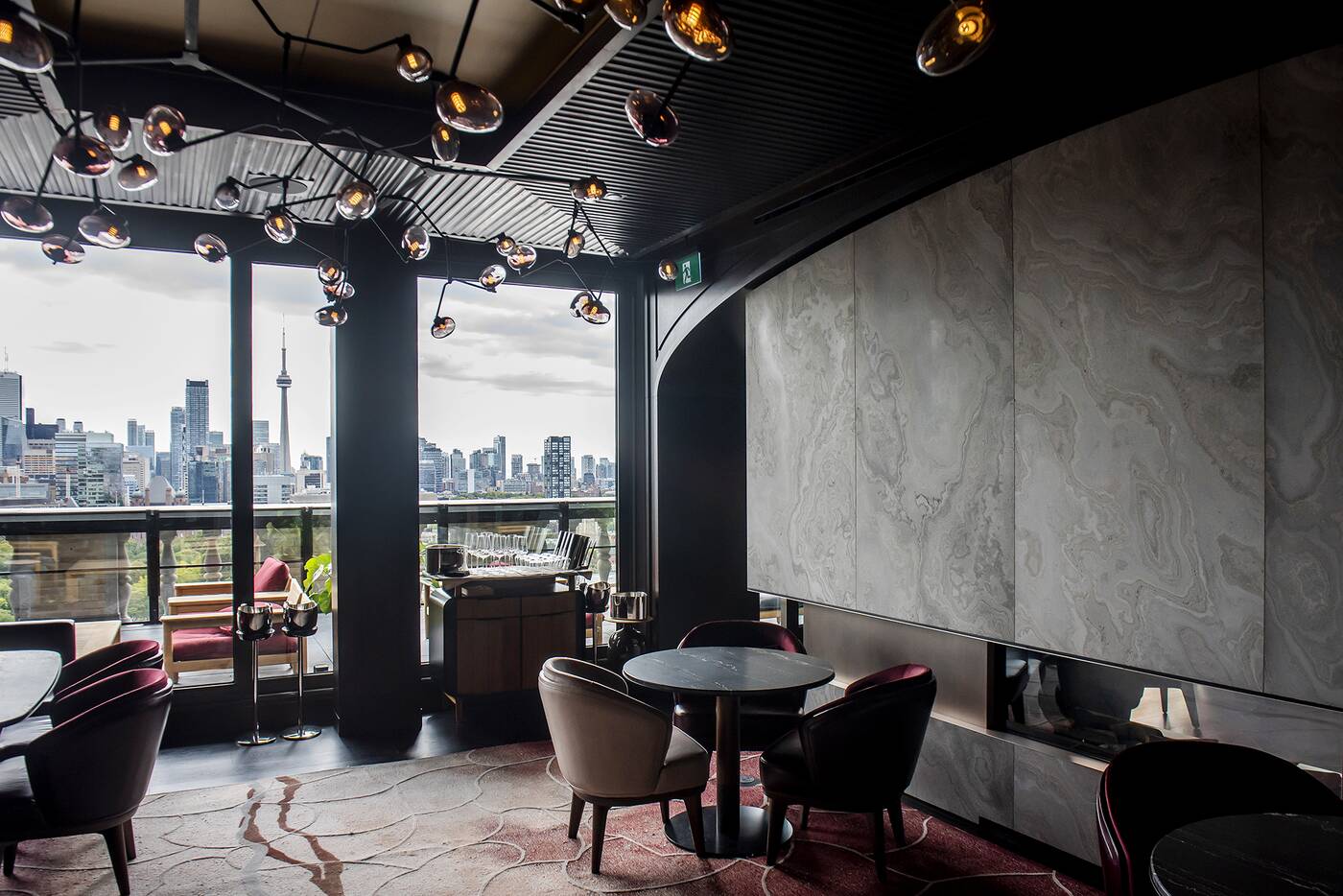 The hotel's cocktail bar has been renamed Writers Room in honour of writers who have spent time here like Mordecai Richler, Morley Callaghan and Atwood. A few of Canada's past prime ministers and movie stars have also hung out in the lounge. 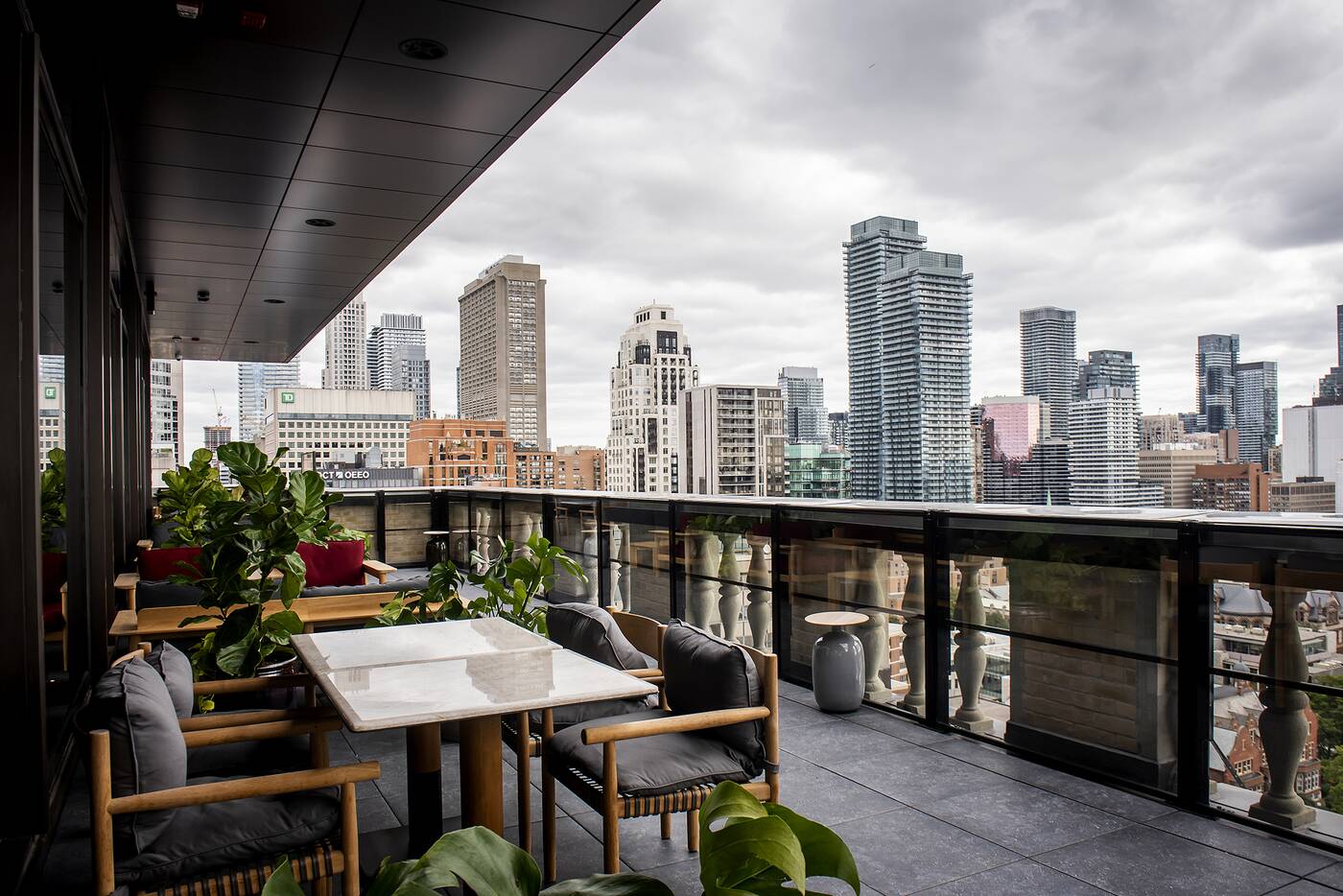 The view of the skyline is unreal. The bar also doesn't take reservations but operates on a first-come, first-serve basis keeping most of the exclusivity you'd expect from a swanky spot like this at bay. Though the prices and general feel keep it feeling quite exclusive. 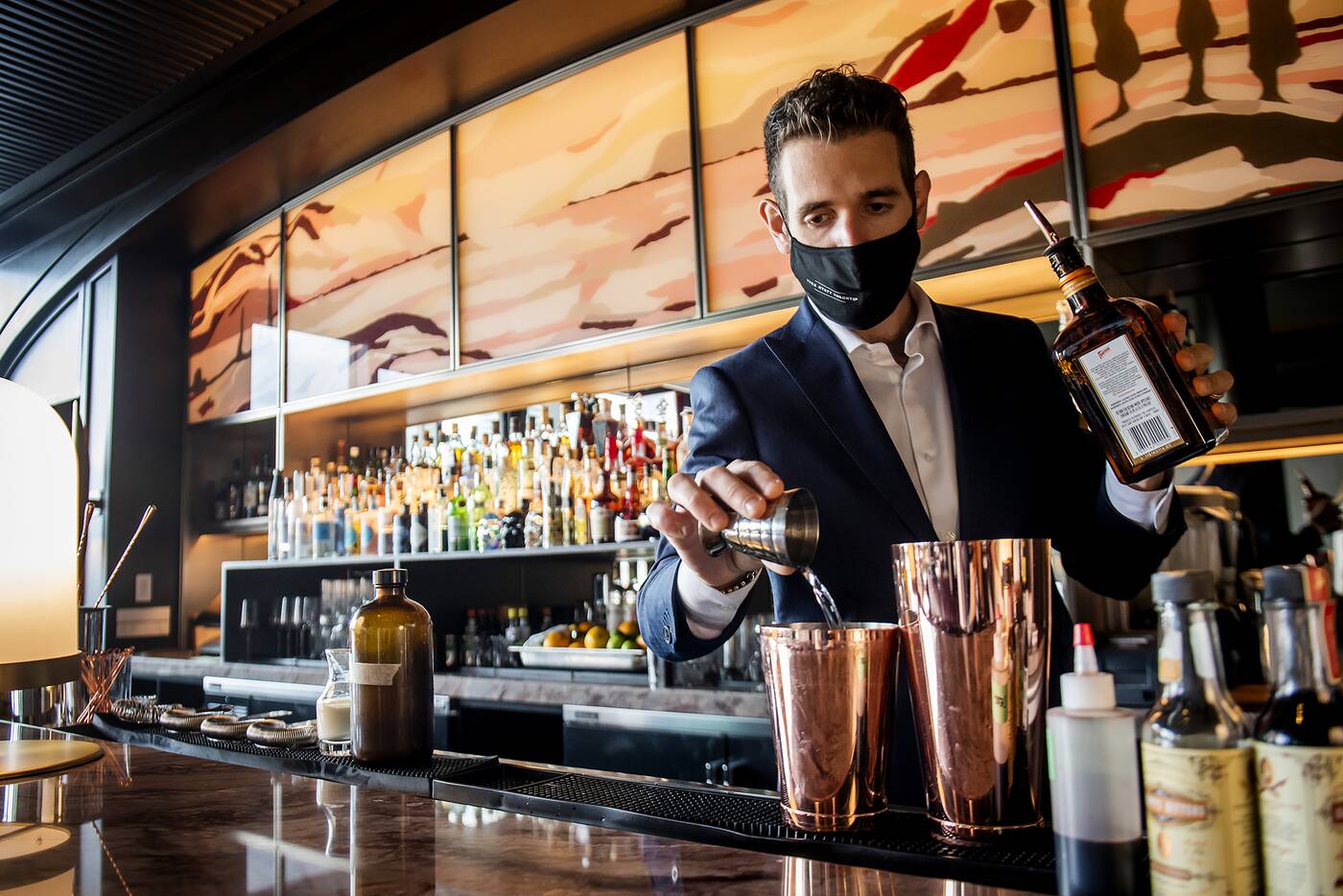 The infamous Joe Gomes retired a few years back after 57 years behind the bar, so Alessandro Aureli (previously of Buca Yorkville and Oretta) will see to it that you pick just the right cocktail to suit your tastes. 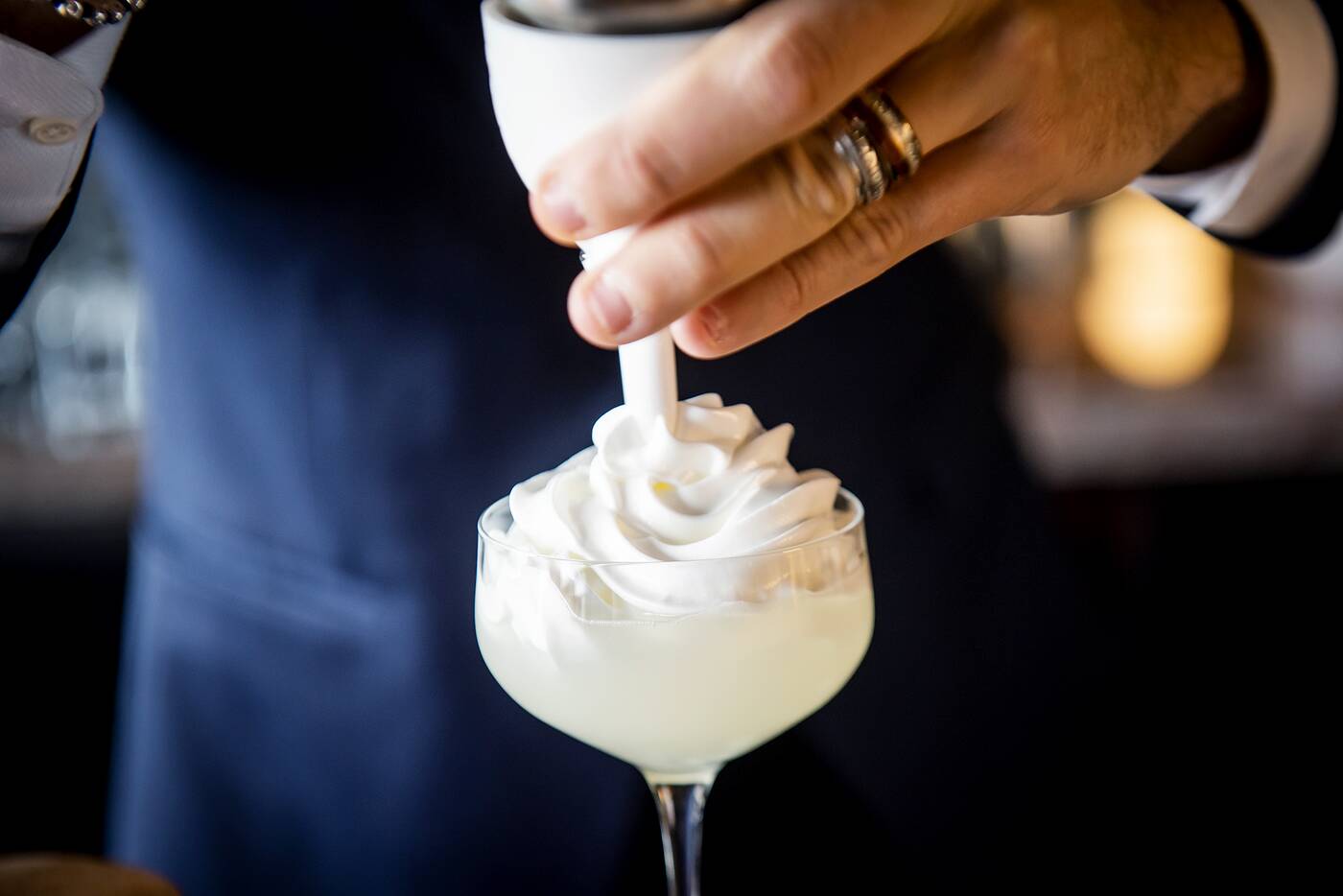 A good day ($16) was inspired by multiple orders for a lemon drop martini. A base of Titos vodka, Cointreau and lemon is topped with homemade meringue and toasted cardamom. 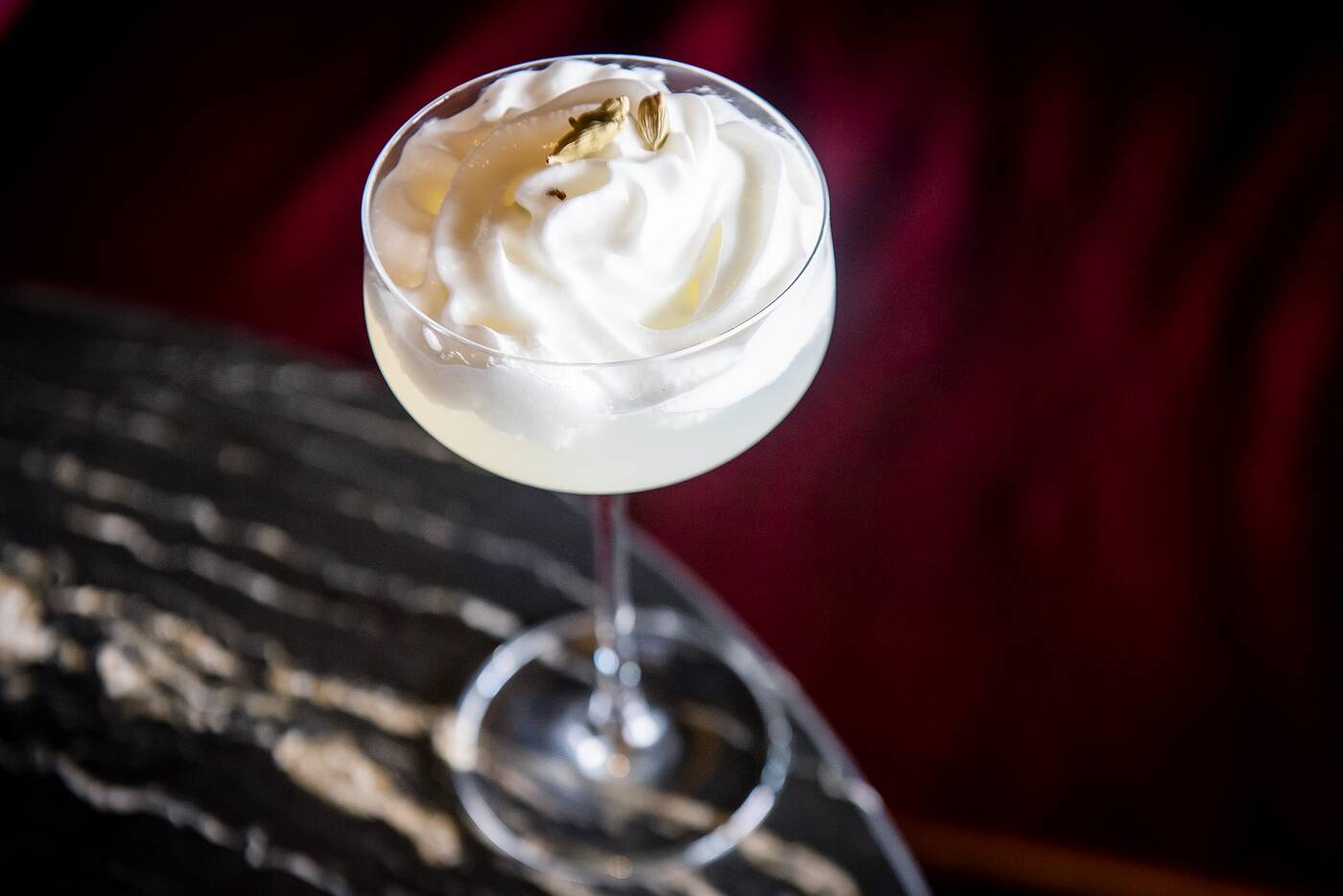 The best way to drink it is by diving right in and getting a mouth full of meringue and citrus-mixed alcohol in one-go. If I didn't know better, I would've thought I had just taken a big bite of a lemon meringue pie. 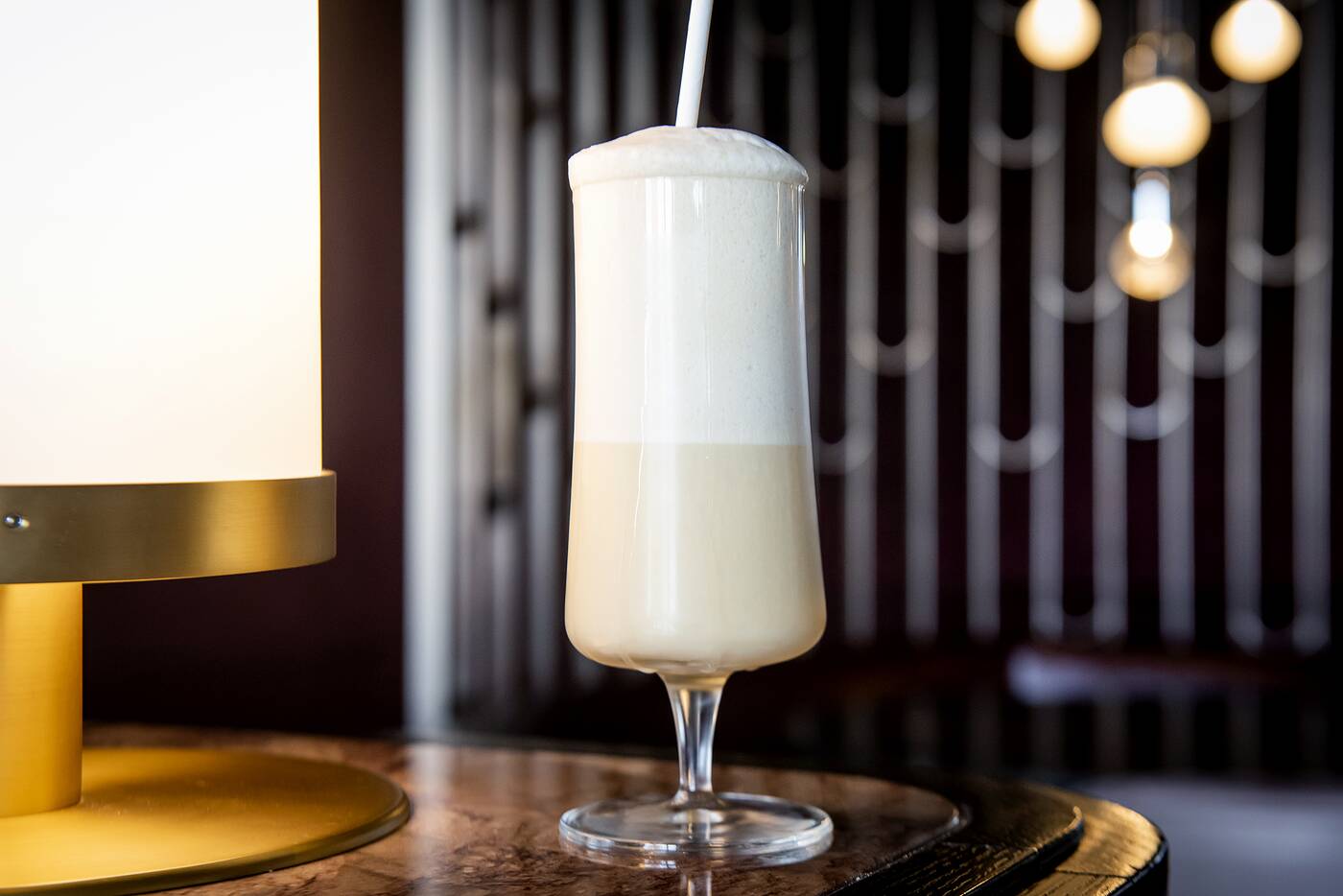 There's also the walking dream ($17), which looks closer to a milkshake. Dillon's gin is mixed with pistachio, green tea, lime, cream and miracle foam for a cold and frothy cocktail. 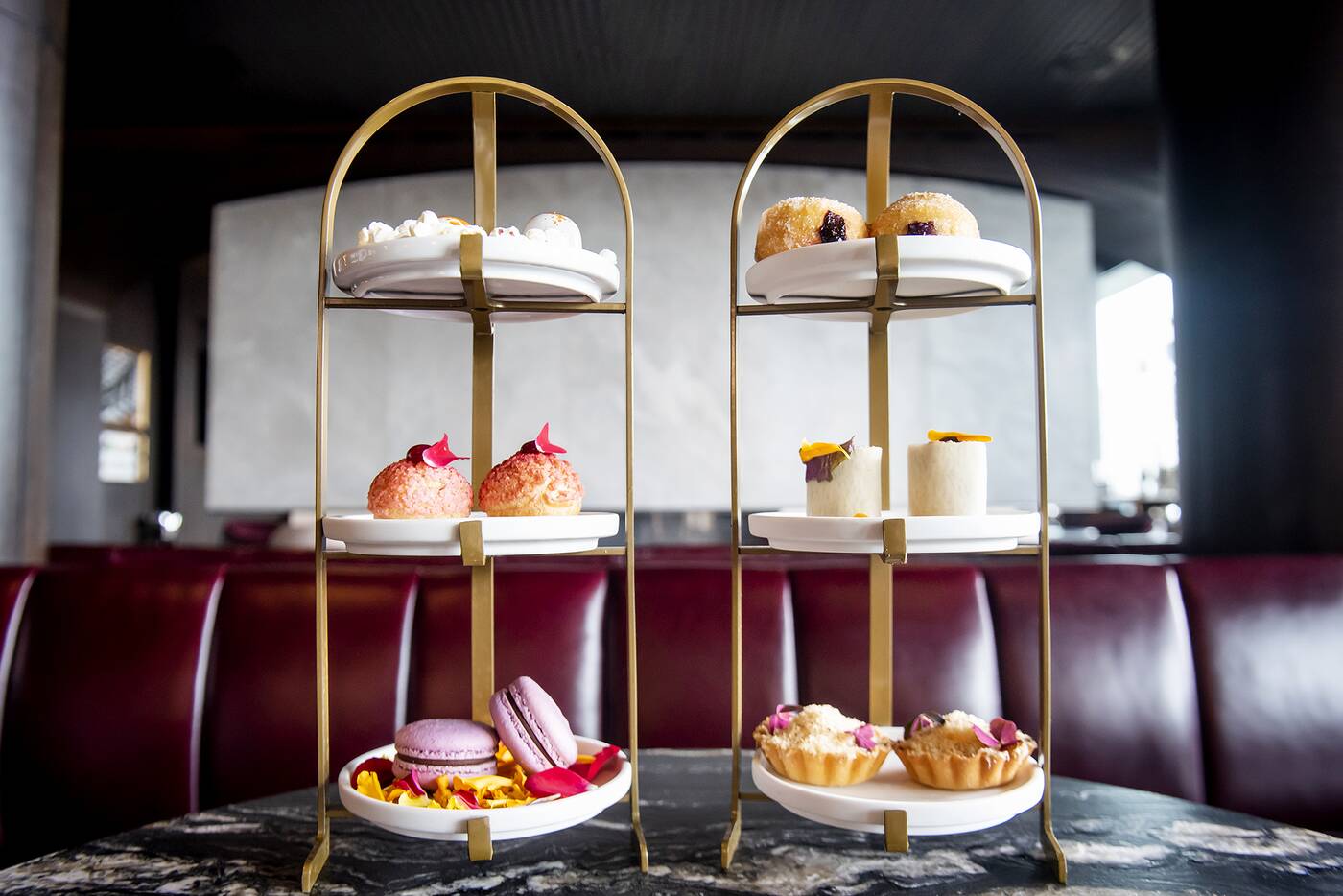 A selection of playful savoury and sweet bites available in the lounge are meant to remind guests of their childhood between sips of a strong drink. 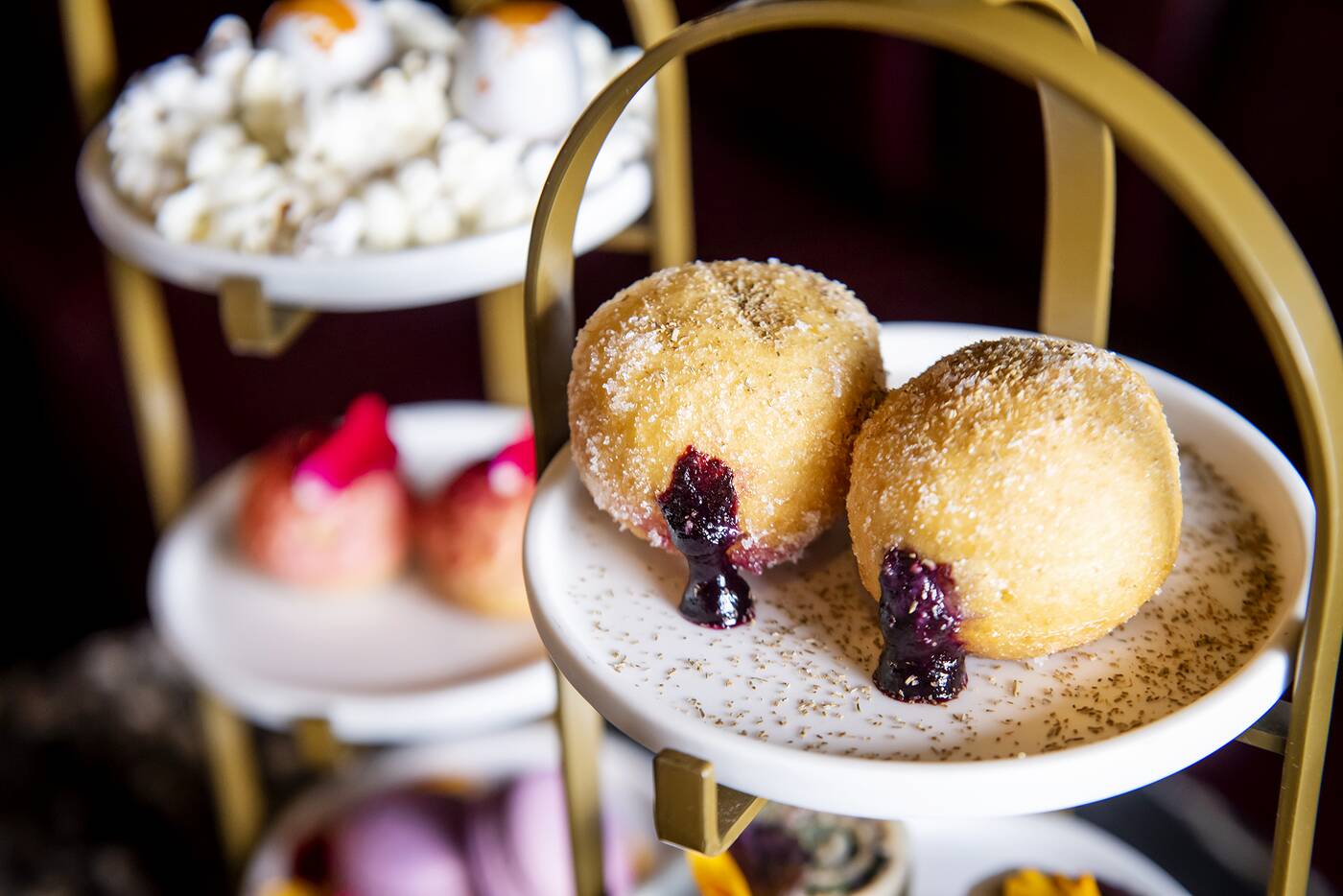 Foie gras donuts ($18) are filled with wild blueberry compote and spruce (this will change depending on the season) for a combo of sweet and savoury, and a donut flavour like no other due to the duck liver. 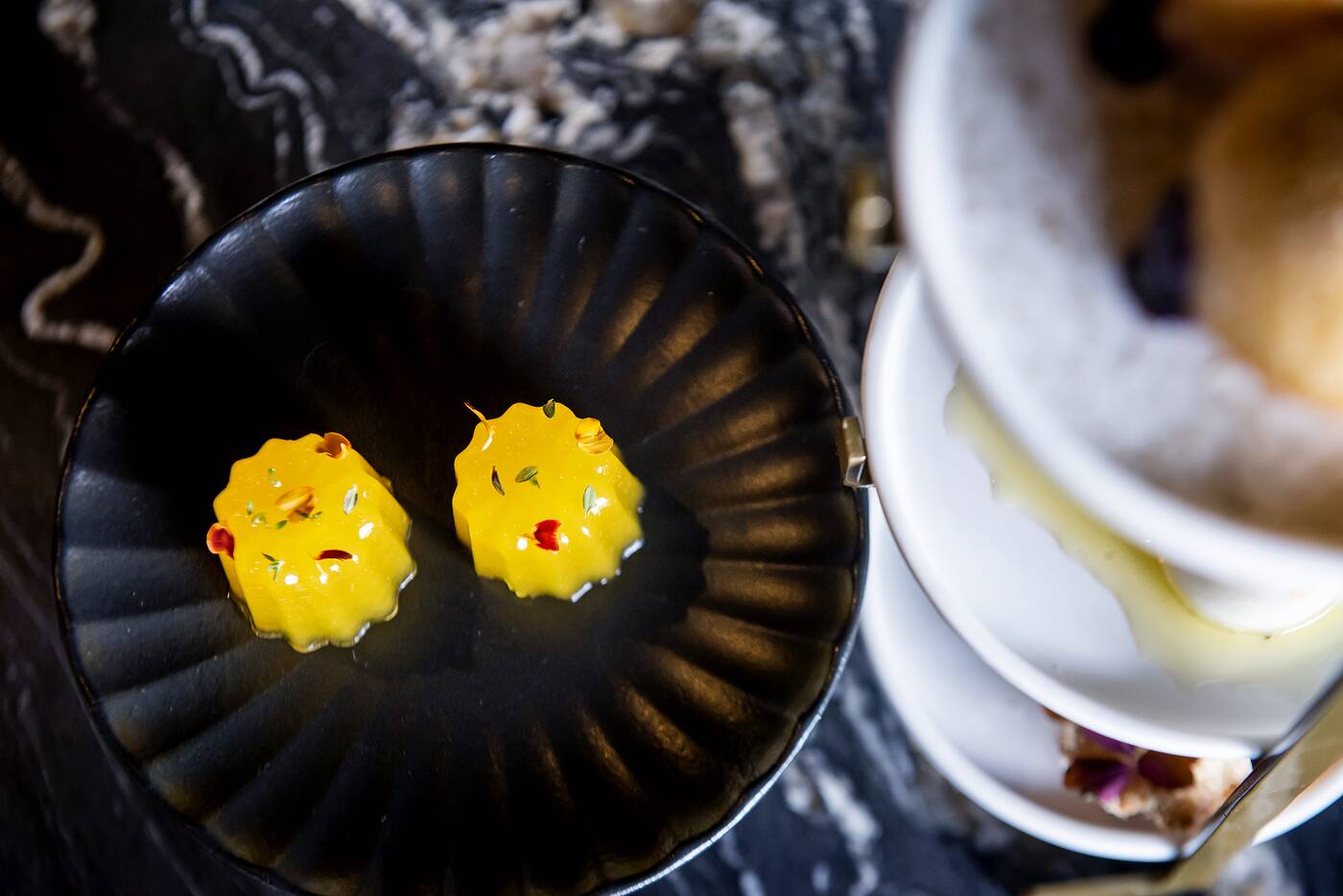 The little cubes of gelatin ($8) mixed with bourbon and roasted mandarin orange oil is likely the fanciest jello shot you'll ever try. 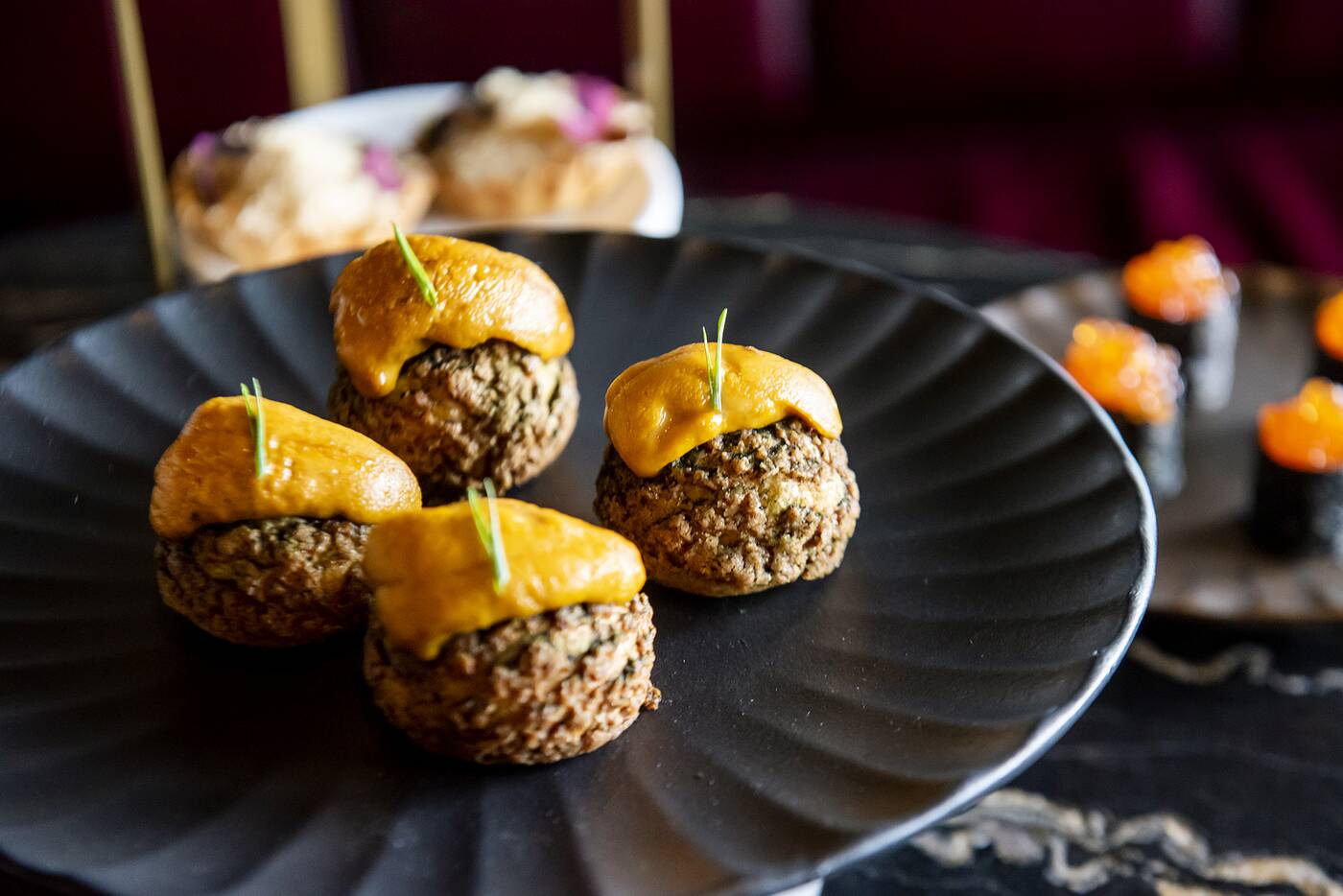 If you're interested in trying a cream puff ($22) that tastes like the ocean, here they make some with uni (or sea urchin's gonads) and seaweed hollandaise. 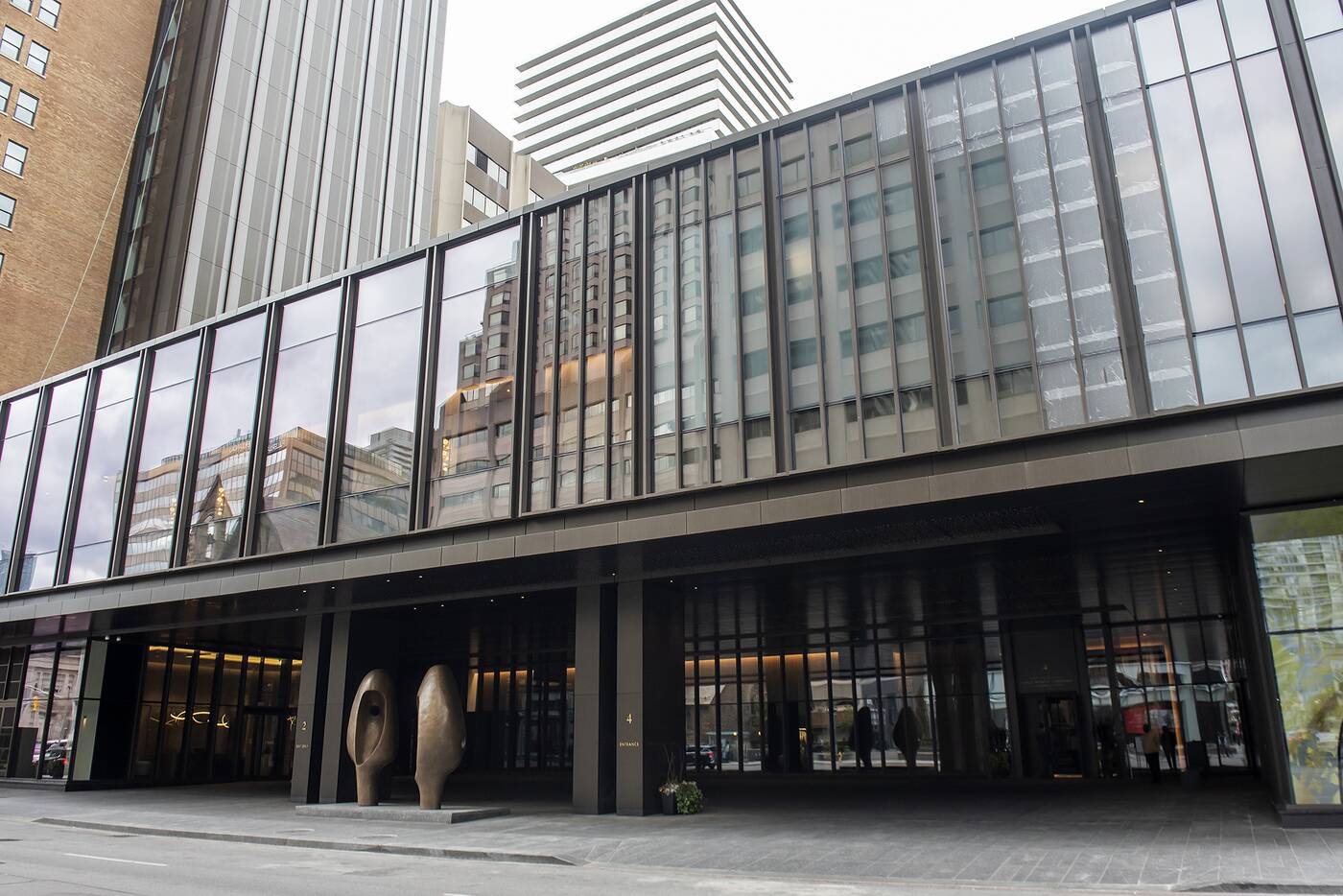