If you haven't yet seen Netflix's latest smash hit, the South Korean television series Squid Game, you should either close this window right now or read on with the knowledge that you might learn some things about its plot and charactes.

In other words: SPOILER WARNING. Please don't @ me.

If your first instinct upon seeing the clip was to shout "nooo!" at the screen, that's understandable — but fret not: The gentleman hosting the game is not, in fact, a psychopathic salesman trying to recruit "zombies" for a sick life-or-death contest.

He's simply a huge fan of Squid Game, and wanted to recreate a scene from the fascinating show to entertain people.

"I set up the game because honestly, it was one of the easiest to remake at the moment out of all the games," said Kishka, a Toronto-based content creator and YouTuber, to blogTO.

"The player had gotten cash at the end of it for playing with me for his time, even though he didnt win. I think we would have been there for a long time if I'd waited for him to win."

To pull off the piece of what he called "public art," Kishka found a YouTube video with instructions for making the folded paper tiles from the scene, in which a nefarious salesman approaches protagonist Seong Gi-Hun at a subway station and challenges him to play the Korean children's game ddakji.

Similar to POG, the goal with this game (sometimes called ttakji) is to flip over square origami cards by throwing something hard at them (a slammer, in POGspeak.)

After making his own red and blue cards, just like the ones in Squid Game, Kishka took them to Bloor Station on Saturday, October 9. 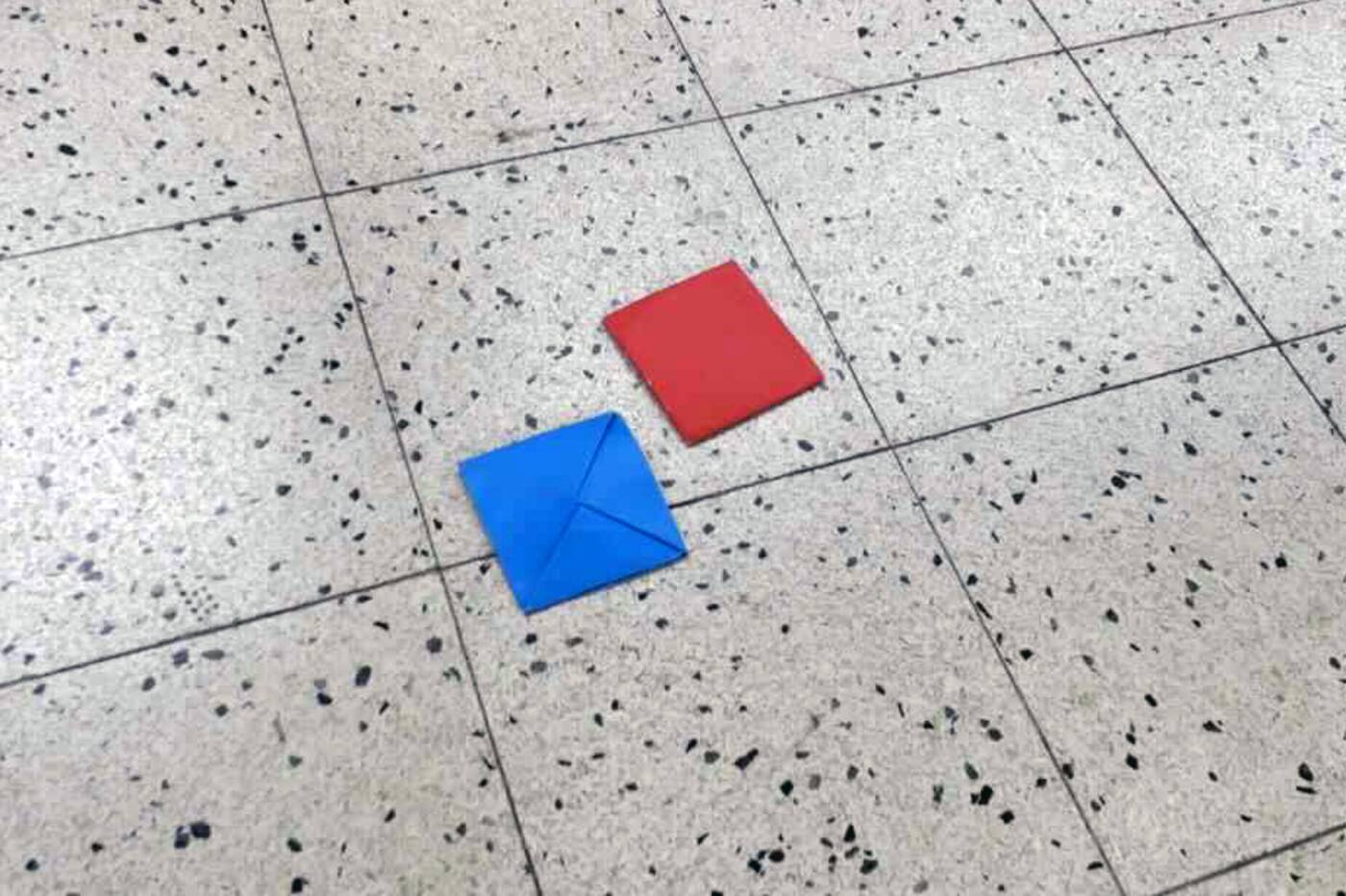 The YouTuber found a video tutorial for making the ddajki tiles and practiced at home until he got these perfect squares. Image via Kishka.

"I chose Bloor subway station because I know that the platforms are two times as large as a regular station, so that it would be completely fine to play the game and I'd be far from the tracks," the artist explained.

His opponent ended up being a man he says actually reminded him of Seong Gi-Hun.

"The person in the video is in fact a man I see regularly asking for money on the intersection of Yonge and Dundas everytime I drive through that intersection," he said.

"I had asked him if he would like to participate in this game with me... I definitely would use that guy for any other clips that I would need a paid actor for. He was amazing."

While that participant was compensated for playing the game with Kishka, nobody got 10,000 won or an ominous business card with a phone number nobody should ever call.

As for the famous slaps doled out by Squid Game's salesman when somebody would lose, Kishka tried to recreate them as best he could without causing any pain.

"I wanted to make it as authentic as possible, so I took consent to actually smack him while playing the game, but I warned him like about a million times before approaching and after we played," said the creator.

"In the video you can see me slapping the guy with a winter glove to make it less painful," he said, noting that there were four light slaps in total.

"I even told him to actually freak out as if I slapped him really hard, but I promise you he was totally okay with it."

While the full, edited video from Bloor Station has yet to be released, some behind-the-scenes footage of Kishka and his player slamming down cards was uploaded to 6ixbuzzTV on Sunday and has since racked up around 135,000 likes.

"I knew this sh*t would happen," wrote one commenter, no doubt because of how huge Squid Game has become and how obsessed with it people are.

With 111 million viewers in its first 28 days, the program now holds the title of biggest ever series launch for Netflix. Halloween should be fun.