Parties at TIFF are half the fun of the festival; the late nights, the celebrity sightings, the sad attempts at pretending you're Colin Farrell's brother to get on a guest list. Silver-screen stars are converging on Toronto between September 4 and 14, and though the number of celebrities at a given bash is directly proportional to the tightness of the guest list, there are plenty of public events thrown into the mix, open to revellers with and without their own IMDB pages.

To help plan your festival experience, we've rounded up some of the most promising (and most star-studded) invite-only, ticketed and free events happening at TIFF 2014.

These venues are hosting multiple parties throughout the festival. Whether you can get in sometimes depends on who you know, how much you're willing to pay or if you mind waiting in line.

Bars with extended licenses
Here's the one most directly relevant to the majority of Torontonians; your favourite bar is likely to be open and serving until 4am (whether Jake Gyllenhaal is there or not). About 50 bars are taking advantage of the later serving hours, with more likely to be announced as the festival gets off the ground.

Soho House
Though they're being very hush-hush about who will be partying there and when, Soho House is always a safe bet for celebrity-spotting (from the outside, obviously; the guest list at this member's-only club is strictly enforced). A number of pre- and post-premiere parties, hosted by Grey Goose, are set to go down at the Adelaide St. club; last year, Benedict Cumberbatch and Michael Fassbender were spotted hanging out on opening night.

Adelaide Hall
The annual Festival Music House showcase continues this year at Adelaide Hall. The event puts some of Canada's best indie acts (this year's selections include the New Pornographers, A Tribe Called Red, and Diana) before an invite-only crowd of industry folk. Mostly, the hope is that some music co-ordinator will pick your song for their next flick, but there's usually a famous face or two in the crowd (Kiefer Sutherland once was spotted on a recent visit). It all goes down September 7 and 8. 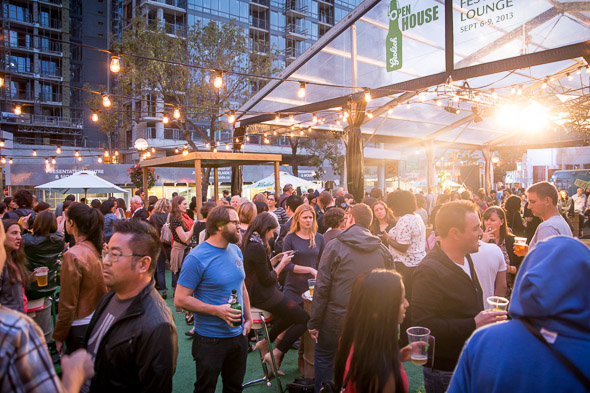 Rdio Music Lounge/Grolsch Open House
And now, a TIFF concert series you can actually get into. As part of their brand-new street festival, TIFF will be hosting open-to-all live performances from some of the very same artists playing for the ivory-tower crowd at Festival Music House the next night. The lineup includes heavy hitters like the Dears, Maylee Todd, Buck 65 and Jason Collett. Grab some beers from you-know-who at the Grolsch Open House (here's what it looked like last year), back for its second year, or snag eats from food trucks like Gorilla Cheese and Buster's Sea Cove. (They won't be free, but what can you do?)

America and The Calvin Bar
The newly-renovated restaurant at the Trump (formerly Stock Restaurant) will play host to a handful of events, including the AMC Supper Suites Lunch shindig on September 6 celebrating TIFF selections Miss Julie, Welcome To Me and Kill Me Three Times; expect the films' stars (including Jessica Chastain, Colin Farrell, Kristen Wiig and Will Ferrell) to make an appearance. Later in the week, America will be graced by the afterparty for 99 Homes, starring Andrew Garfield, on September 8.

Storys
The massive four-floor event complex at King and Duncan will be hosting parties throughout the festival, with events scheduled for September 4-6, 8 and 12 (including what appear to be premiere parties for Welcome To Me and Kill Me Three Times). The club will likely remain an exclusive fortress that can only be breached through insane fame or connections. 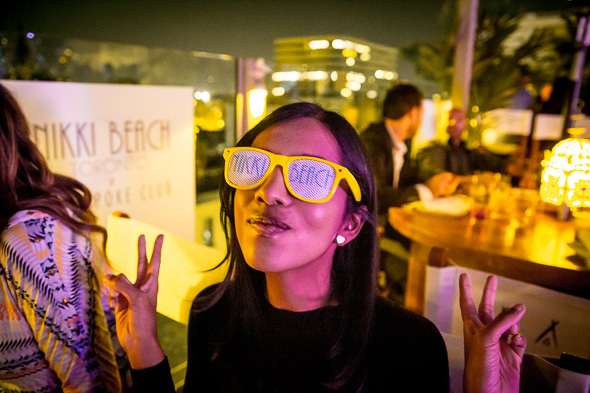 The Spoke Club
The Nikki Beach pop-up club returns for another year at TIFF, with the international chain of party venues bringing splashy white decor and a whole lot of palm fronds to the Spoke Club between September 4 and 7. To make reservations, check out their website (remember, it's an eight-person and two-bottle minimum).

Buonanotte
The Mercer St. Italian spot will host events and cast parties daily September 6-11, the first of which is a party hosted by model Stacey McKenzie. Look for details on events - private and public - to keep trickling out.

3rd Annual TIFF Gala
This glamorous fundraising bash kicks off the festival with a $1,500-a-plate dinner, live entertainment, a cocktail reception, and a live onstage chat with Al Pacino. (Stargazers with a specific interest in Al Pacino, your time has come.)

Producer's Ball at the Royal Ontario Museum
Over at the ROM, Canadian media types will gather for a lavish bash in celebration of World Vision Canada. Familiar faces include Jian Ghomeshi, George Stroumbolopolous and Kardinal Offishall. 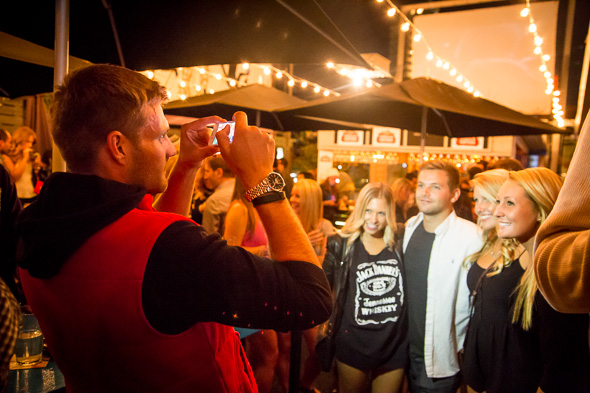 Rock Steady at the Drake
Nail art from Pinky's, free tattoos from Speakeasy, and tons of specialty cocktails - the Drake sure knows how to throw a party. Toronto's favourite boutique hotel will keep the tunes spinning and the bar open late for the entirety of TIFF, but their public opening-night party should be circled on your calendar. DJs include Bit Funk, Montrilla and Cyclist; cover is $10.

Party In The Core at Drake One Fifty
Meanwhile, back in the downtown core, the Drake's Financial District offshoot will host a (free, public) afterparty for the Grolsch Open House's opening night. Motown act The Big Sound will play, and Brendan Canning DJs.

The Captive Canadian Release Party
Atom Egoyan's latest flick will be feted at the Great Hall on Thursday night, though the film itself is actually absent from the TIFF lineup. Either way, you may or may not be able to catch a glimpse of Ryan Reynolds.

#omgTO
The Young Emerging Actors' Assembly's opening-night party is set to go down at Studio Event Theatre, with a slew of Canadian movie mainstays, including filmmakers Bruce La Bruce and Kate Melville, set to attend. General admission begins at 11pm for $10.

TIFF Bachelor Party
Nothing says "international film festival" like a party featuring past and present stars of The Bachelor. Rub shoulders with some dudes who at one point chose partners on reality TV at Flirty Girl Fitness.

Mongrel Media Party
The Canadian movie distributor is throwing its annual TIFF bash at the Evergreen Brick Works; though details are currently scant, the firm's TIFF14 selections include the star-studded Clouds of Sils Maria - maybe there'll be a K-Stew appearance? 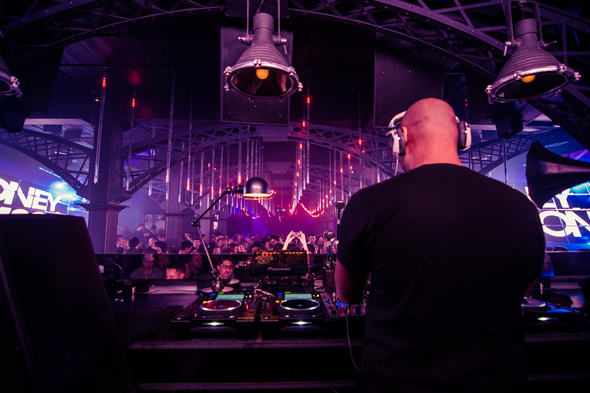 Russell Peters DJ set at Uniun
The Canadian standup (who evidently began his career as a DJ - thanks, Wikipedia!) returns to the Adelaide St. club to kick off another TIFF with another DJ set. Tickets are $15.

Films of City Frames afterparty
Giorgio Armani brought in some up-and-coming filmmakers to create short films inspired by the designer's new sunglasses line. That's not much of a hook for movie buffs, but the whole thing culminates in a industry-only party atop the CN Tower, DJ'd by none other than Mark Ronson.

Hello! Canada TIFF gala
The celeb-studded gossip rag throws an equally celeb-studded bash each year; this year's event, at the Ritz-Carlton, honours the magazine's picks for the top 25 new stars at TIFF. (That list is forthcoming, but whoever the magazine's going to honour, it's a safe bet you'll be able to spot them on the red carpet.)

Hugo Boss / The Riot Club post-premiere party
Hugo Boss and GQ will be celebrating the premiere of The Riot Club, a drama about the secret lives of upper-class Brits at, curiously, Toronto's hottest new French restaurant, Colette. (Apparently, the climax gets super Lord Of The Flies-y. Everyone might need a stiff drink after that.) The invite-only bash goes down at 11pm. 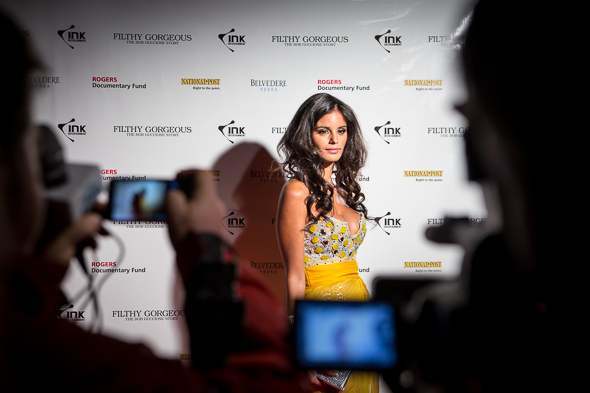 2014 Artists for Peace and Justice Festival Gala
The annual fundraising gala moves to Casa Loma this year, where guests will enjoy a black-tie dinner followed by some "very special musical performances" - past musical guests include Eddie Vedder and Rufus Wainwright, though it's not yet known who will appear this year.

eOne Films party
The distribution company will pack 1,500 industry guests inside the Moss Park Armoury for their annual bash. In addition to Can-con-approved guests like Sarah Gadon, Atom Egoyan, David Cronenberg and the Trailer Park Boys (!), Charlotte Gainsbourg, the dowager empress of difficult indie films, has been confirmed to attend.

ACT Sundays: Lil Jon
The TIFF-adjacent (if not directly related) fun at Uniun continues with a DJ set from Lil Jon. Turn down for what, indeed. Tickets are $20. 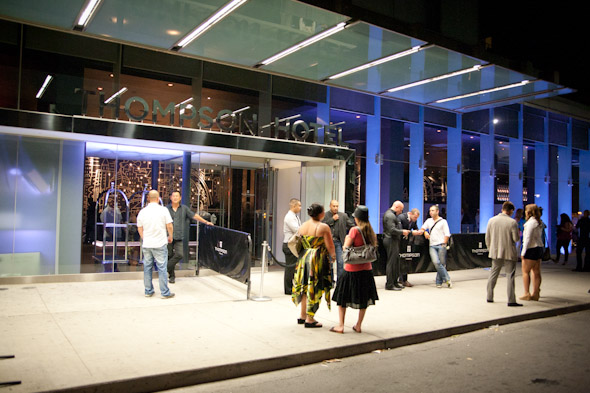 Whiplash premiere party
The TIFF selection, which follows a young man's quest to become a top jazz drummer, will reportedly be followed up with an industry-only evening of music on the rooftop of the Thompson Hotel. Lead actors Miles Teller and J.K. Simmons are set to attend.

Best Buddies gala at the Carlu
This year, the $15,000-a-table gala fundraiser honours actress Goldie Hawn - we don't think Kate Hudson is in town, but if she is, she'll be here.

2001: A Space Odyssey - The Party
Young Lions Music Club continues their TIFF tradition of turning a Stanley Kubrick film into a blowout party. This year's selection is the director's legendary exploration of space travel, the human condition, and giant obelisks. (The event, at 99 Sudbury, is also the pre-party for TIFF's Stanley Kubrick exhibit, which launches in October.) Tickets are $15.

Thanks to the Equalizer, starring Denzel Washington, for sponsoring our coverage of TIFF 2014.

Did we miss any TIFF parties? Add them to the comments.