If furniture could talk, one man's Toronto apartment would tell quite the story.

As historic Toronto buildings get destroyed for condos one after the other, Matthew Stokes tracks down pieces from them to decorate his own apartment.

The Toronto native has been collecting Art Deco furniture and objects for a decade. Amongst his collection is an elevator gate from the original Toronto Star building and a grandfather clock the old Westinghouse building on King Street. 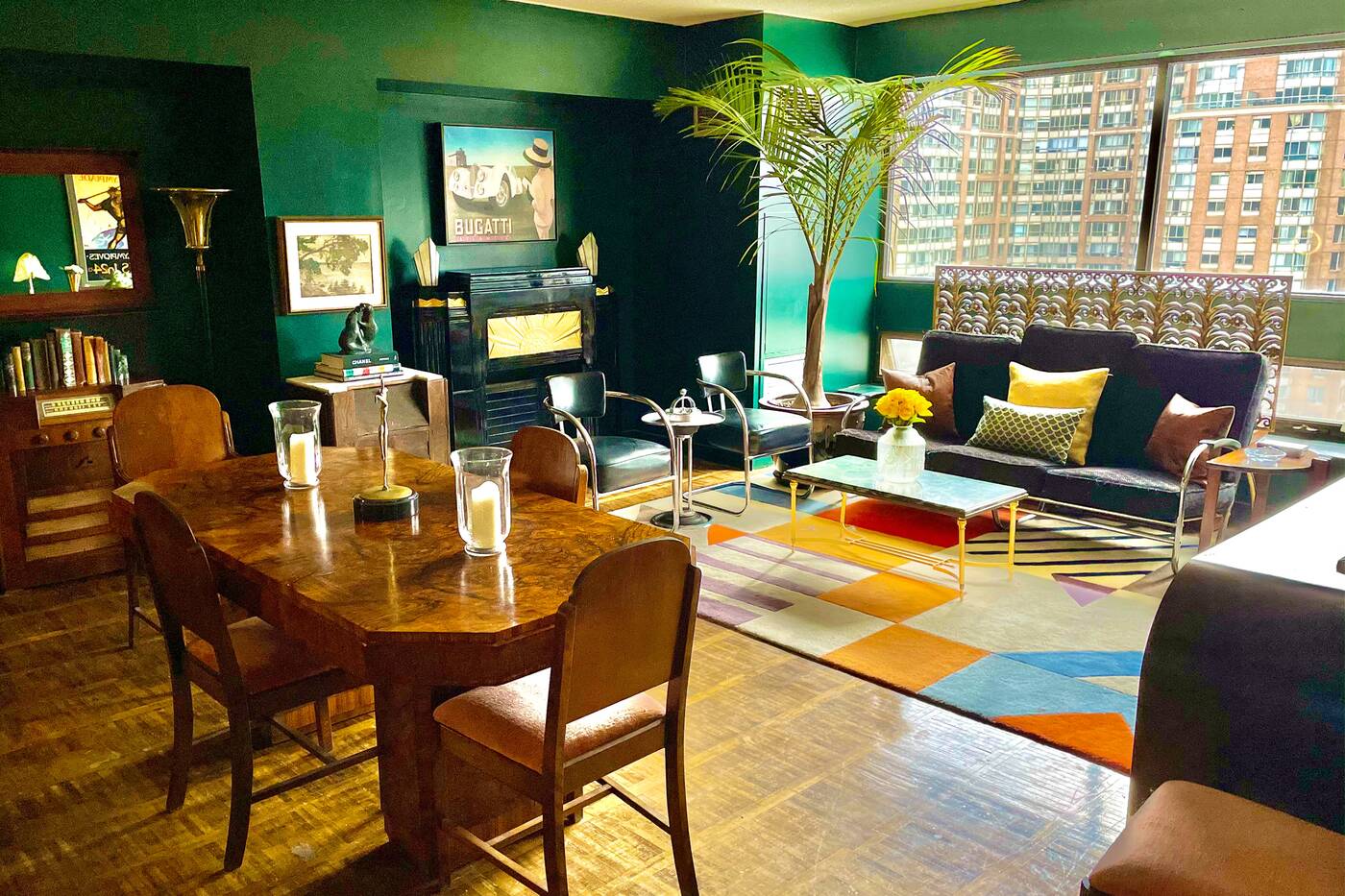 “I love all of my pieces," Stokes says. "But what's really important to me is the story. I like to know that there's a story behind each piece.”

The Art Deco movement started in the 1920s and lasted until the 1940s. It is easily recognized by its geometric shapes, lines and bold materials.  It represented everything that was luxurious, glamourous and progressive. 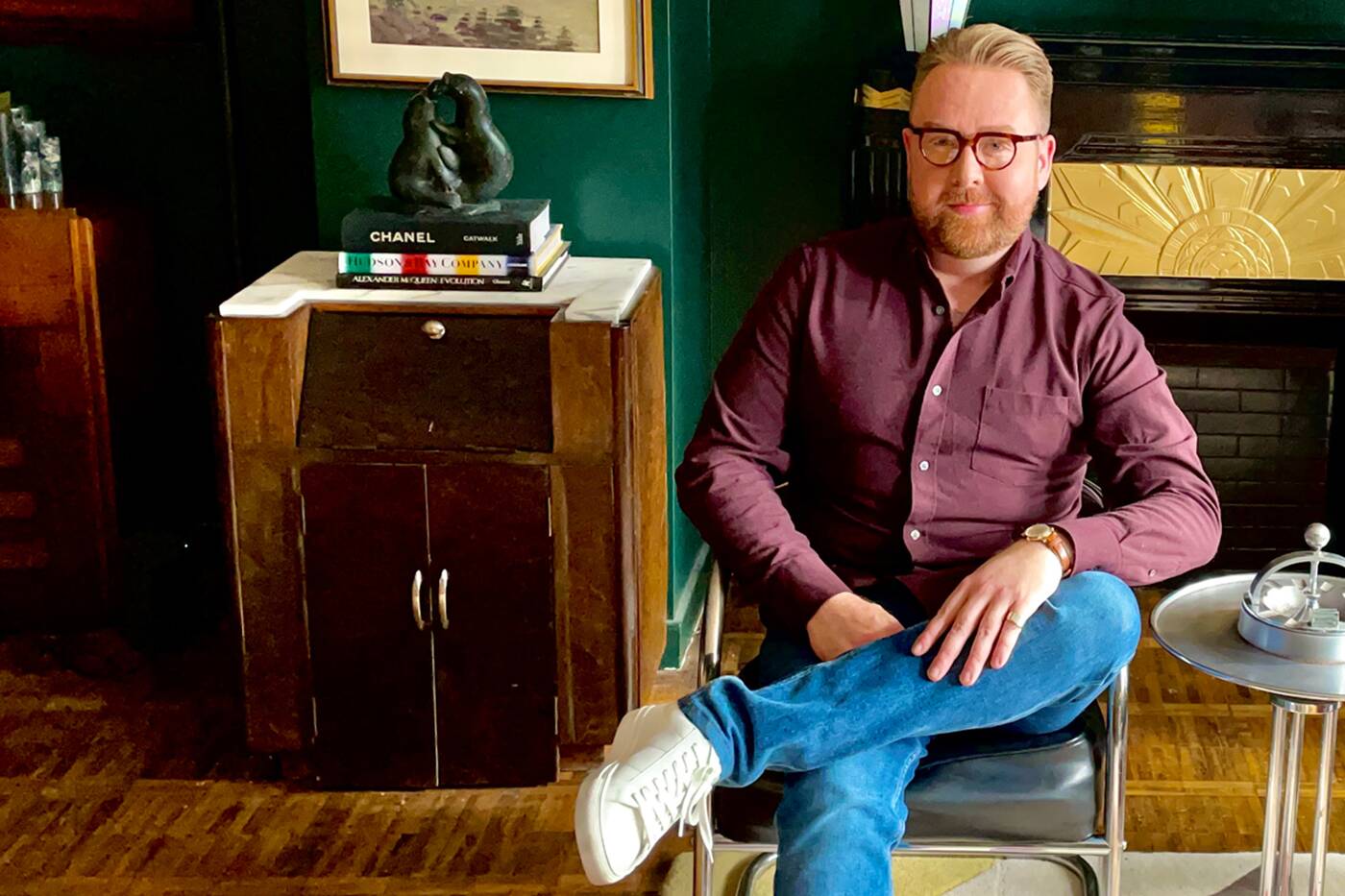 Matthew Stokes sitting by the bar that started it all, built by his grandfather in the 1930s.

After moving to Toronto from Montreal, Stokes wanted to decorate his new place but wasn't in the financial position to buy expensive art pieces. So he decided to fix up an old bar that his grandfather built for his grandmother in the 1930s.

"It was given to me in a state of disrepair and I spent way too much time restoring it," he says. "This was what really started my love for Art Deco."

After that, he began scouring Kijiji, Craigslist and garage sales for more antique pieces. 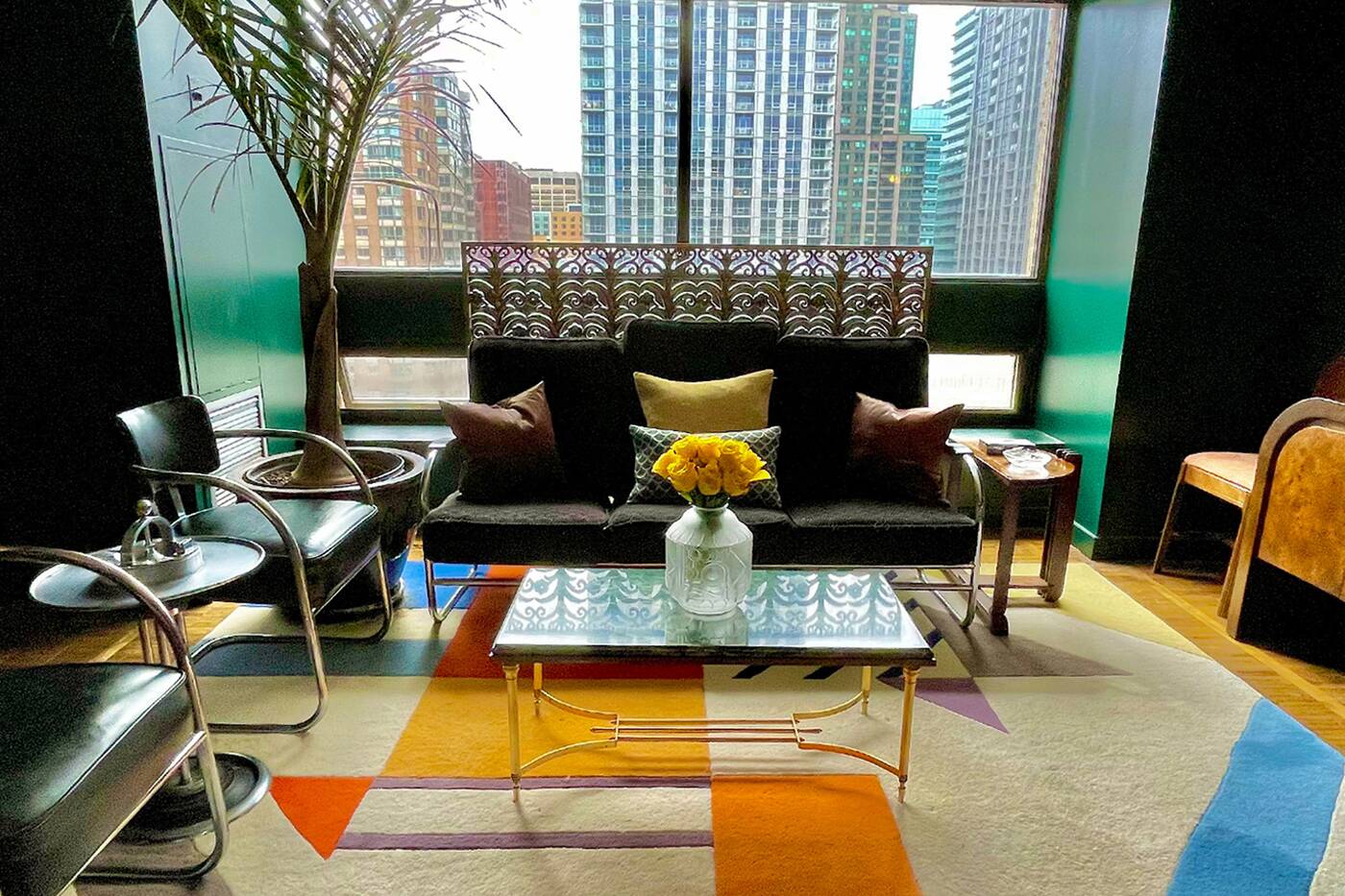 A panel from the elevator door from the original Toronto Star building now stands behind Matthew Stokes'sofa.

Most recently, he got a solid brass panel from an elevator door from the old Toronto Star building, built in 1929 and demolished in 1972. It was first in the possession of a Toronto Star executive who then passed it onto his son, who sold it to Stokes. 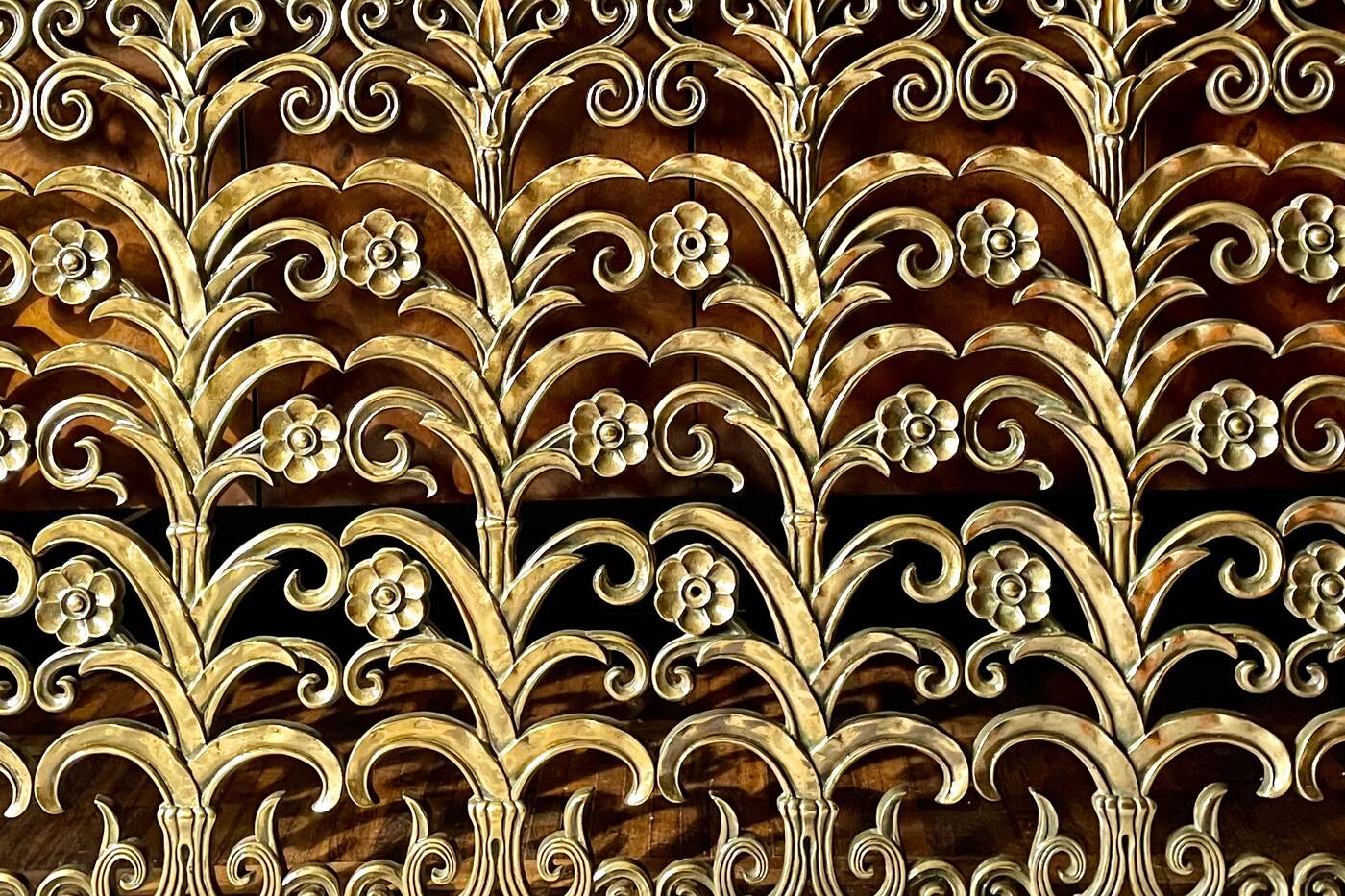 The Toronto Star's elevator panel was made from solid brass.

"The Toronto Star building was an Art Deco marvel" Stokes says. "Unfortunately, Toronto basically tore down all of its historical buildings in the '70s. It's tragic." 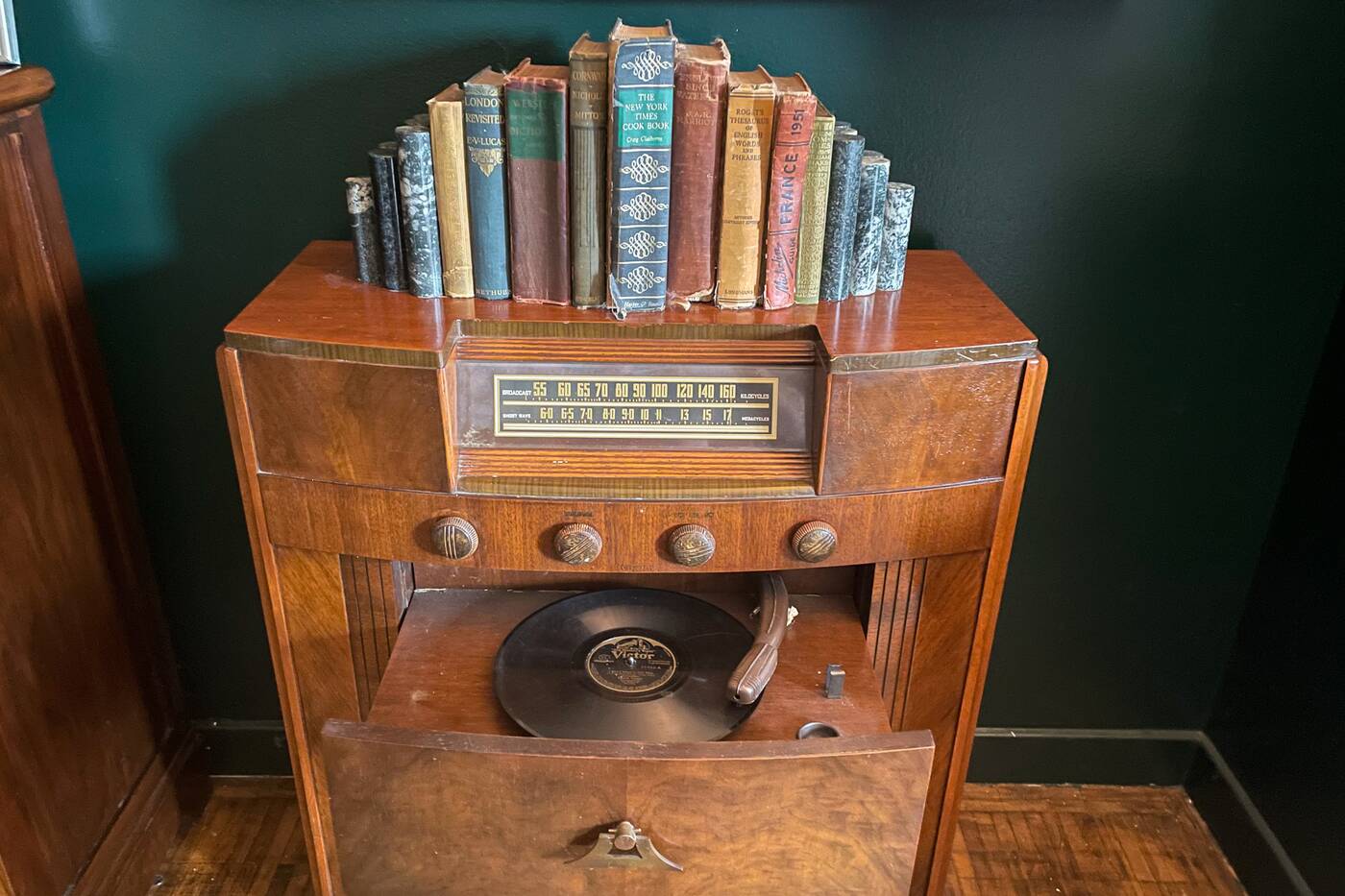 Stokes' apartment is like a mini ode to Art Deco and old Toronto. You will never find furniture from IKEA there.

"It's not just about an aesthetic thing" he says. "It's about a quality thing." He also prides himself in helping the environment by "breathing new life into pieces." 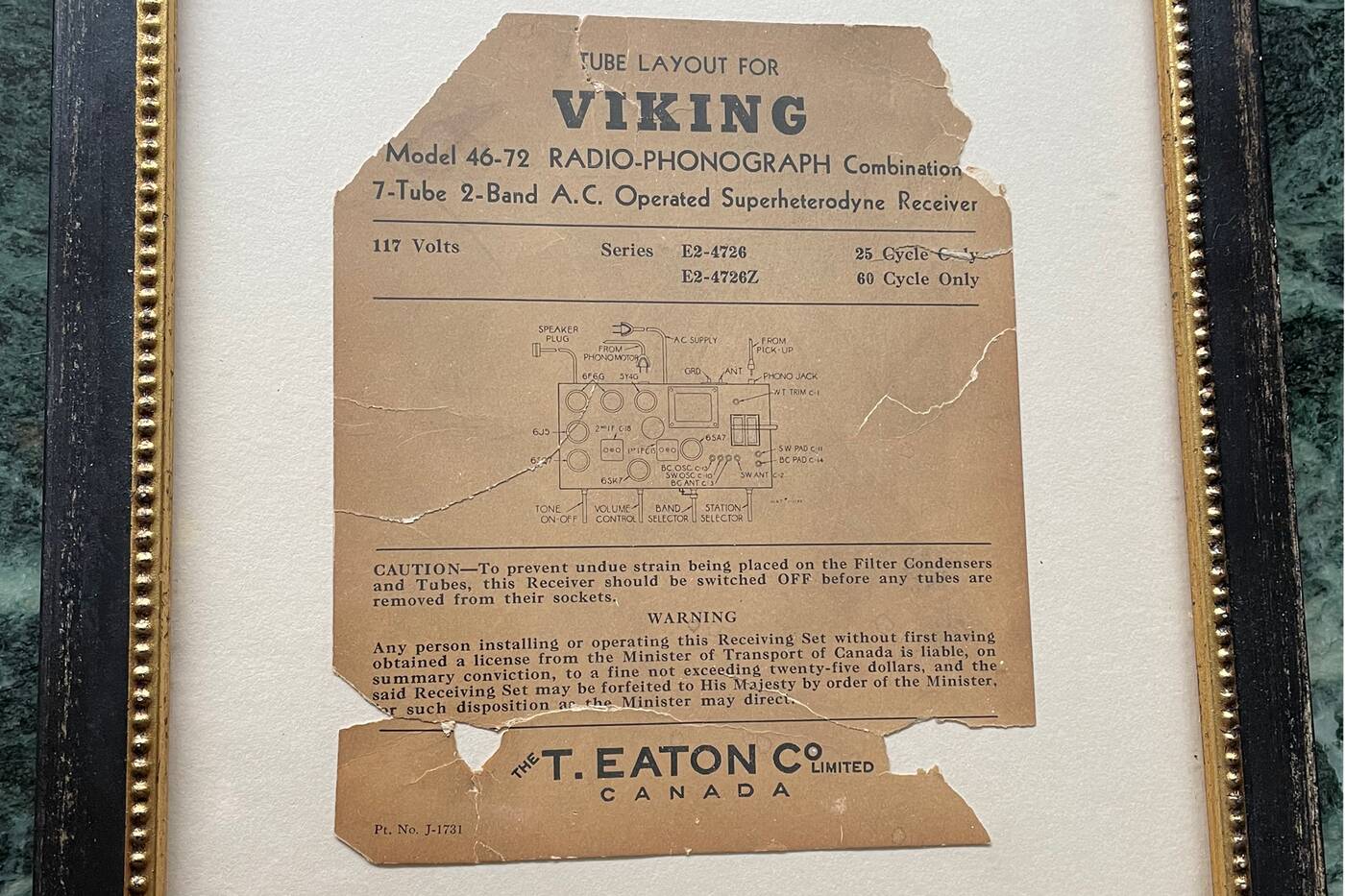 The original instructions for the 1930s radio and record player.

This is exactly what he did to a Columnaire clock from the former Westinghouse building on King Steet. It was originally found in the executive lounge of the building which is now, not surprisingly, condos. Despite being almost a century old, the clock and radio remain fully functional. 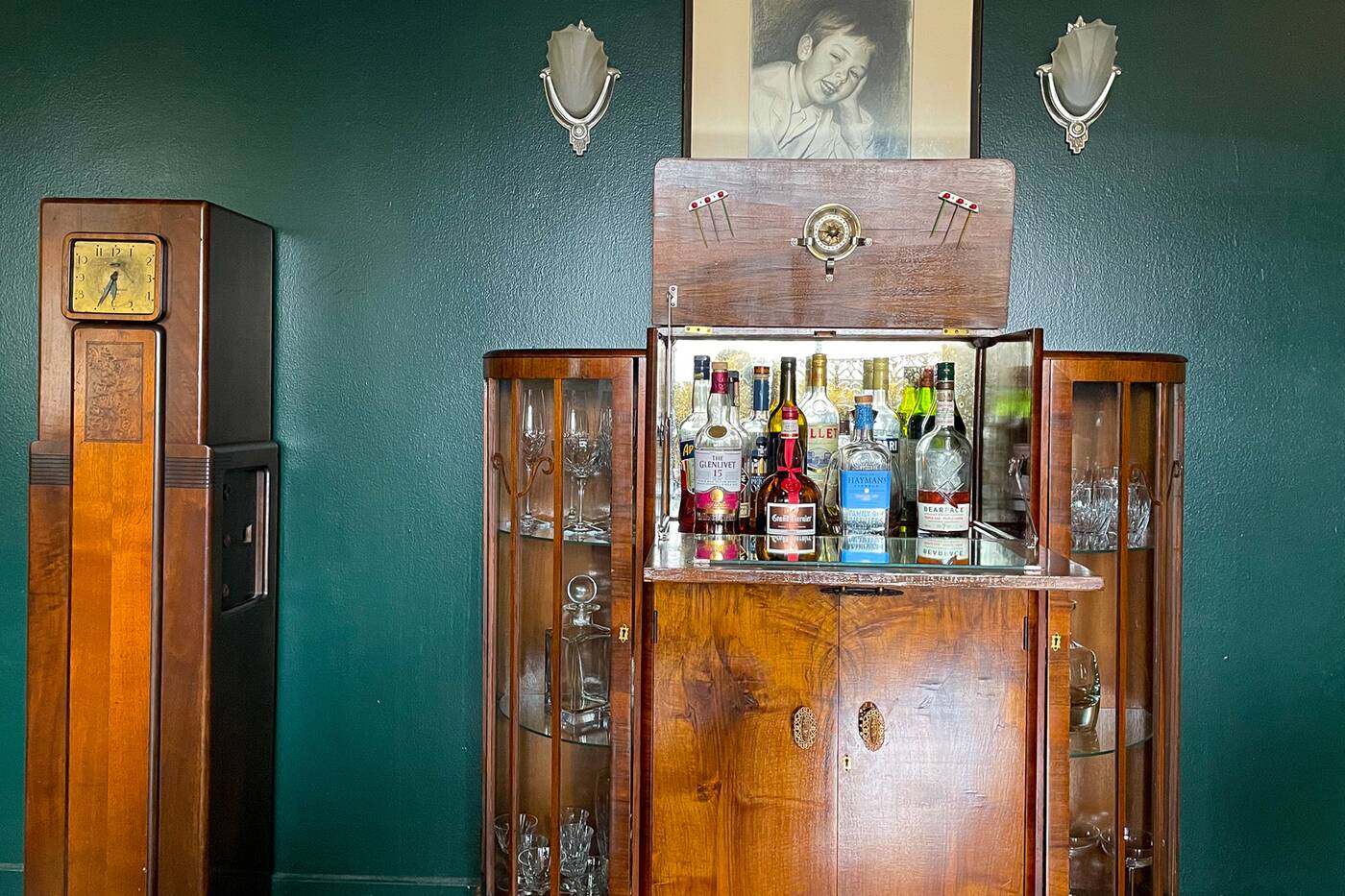 On the left stands a Columnaire clock from the former Westinghouse building on King Steet.

On the other side of the room stands a credenza, which was custom-made by the Moore Corporation, whose global headquarters were in First Canadian Place. 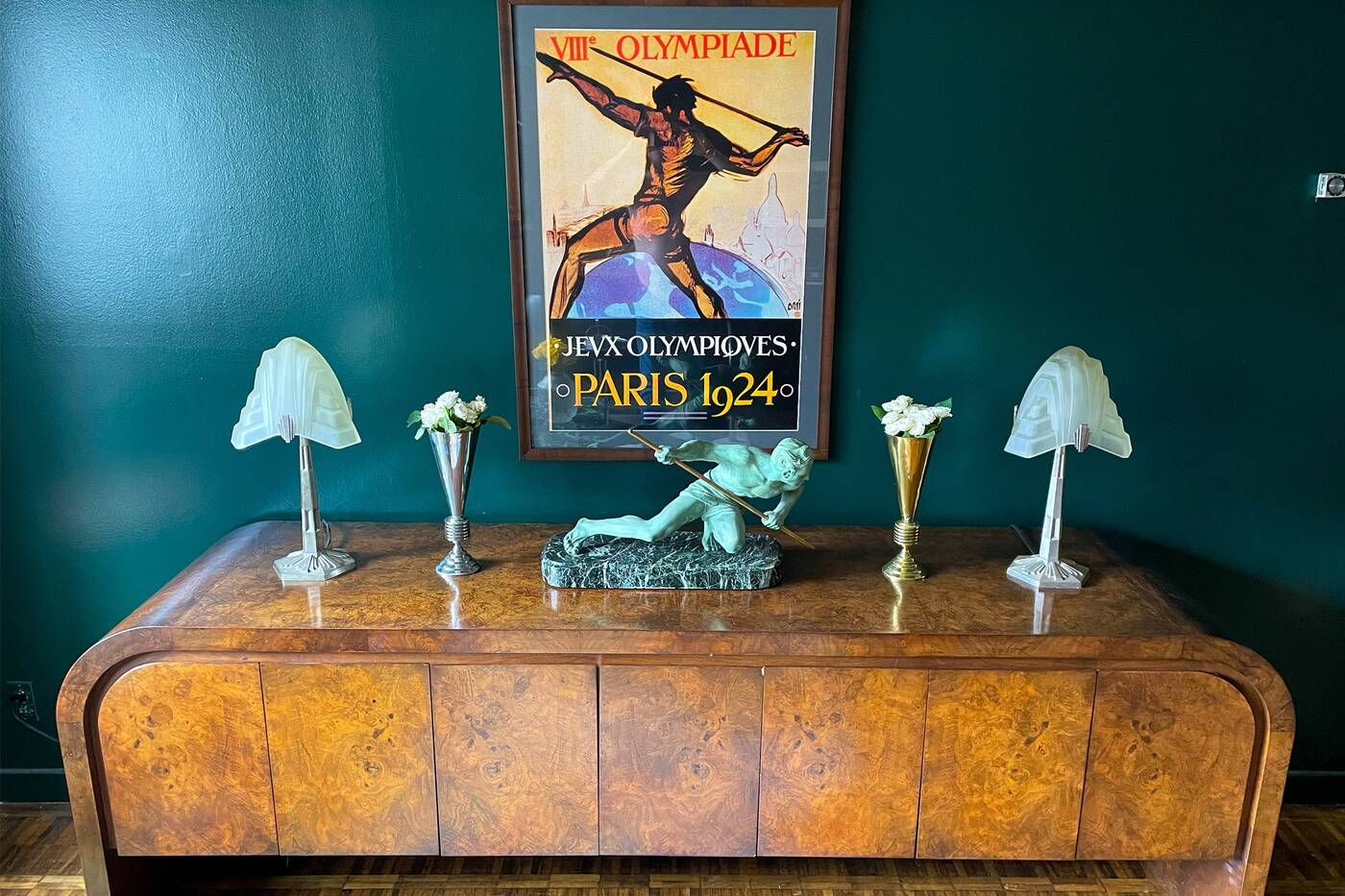 A credenza made by the Moore Corporation now stands in Matthew Stokes' apartment.

In 1999, it was purchased by the law firm Power Budd LLP and for years it stood in the executive boardroom, where many key deals involving Ontario's energy restructuring negotiations were made.

Later, the credenza was moved to founding partner Robert Power's, Avenue Road home and was eventually sold to Stokes.

The table in the middle of the room was built by the Epstein Brothers of London, England in the 1930s. 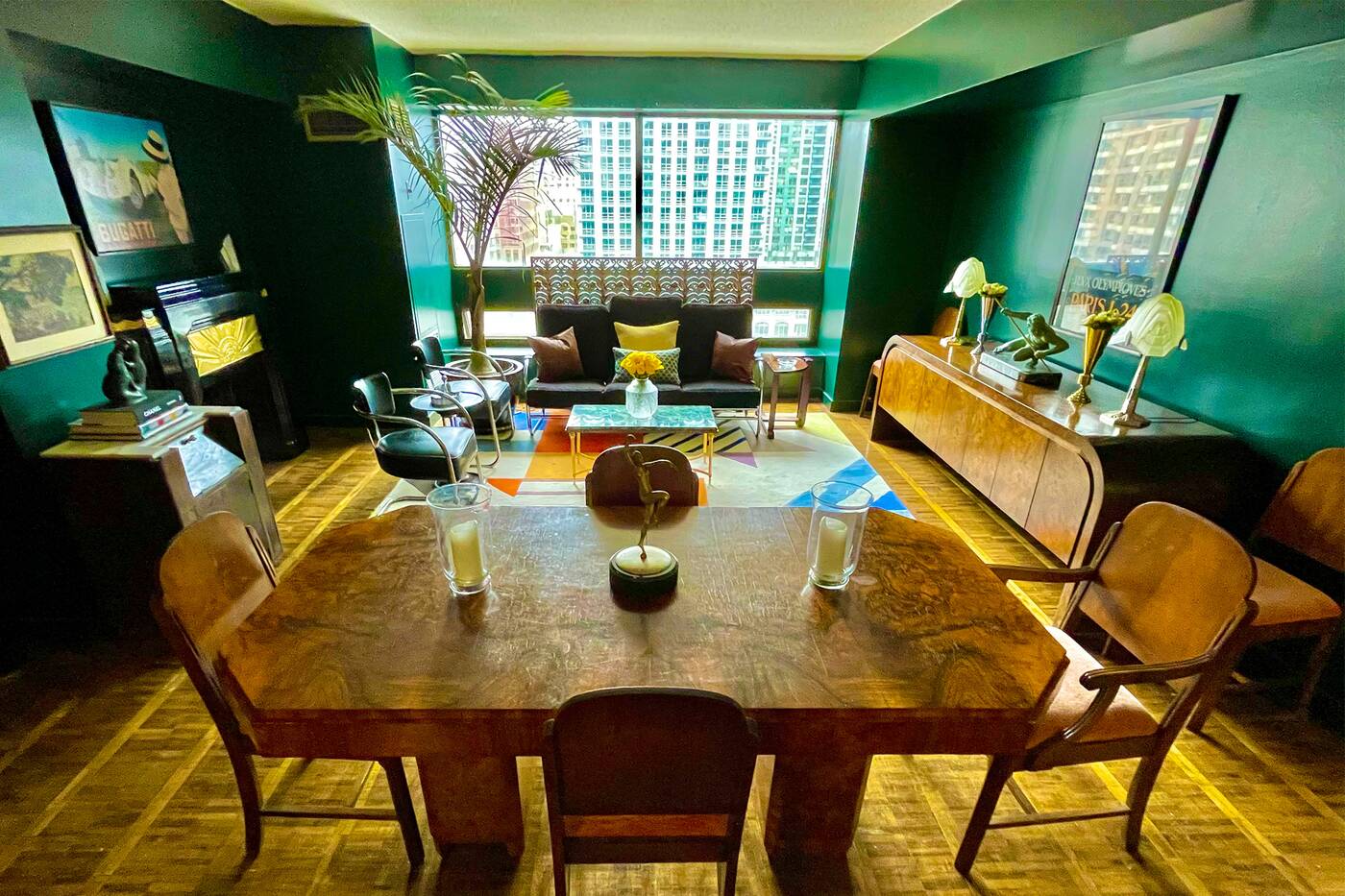 Matthew Stokes purchased this Epstein Brothers of London table for $400.

The company was known to be one of the finest British Art Deco stylists and their pieces now sell for thousands. Stokes was able to buy the table for only $400 on Kijiji.

Unlike many collectors, Stokes doesn't just showcase his pieces, he uses them.

"I'm all about usage," he says. "I love living with [the pieces] and using them as they were meant to be used. That can be kind of controversial for collectors. Even the act of restoring them is controversial because they lose value." 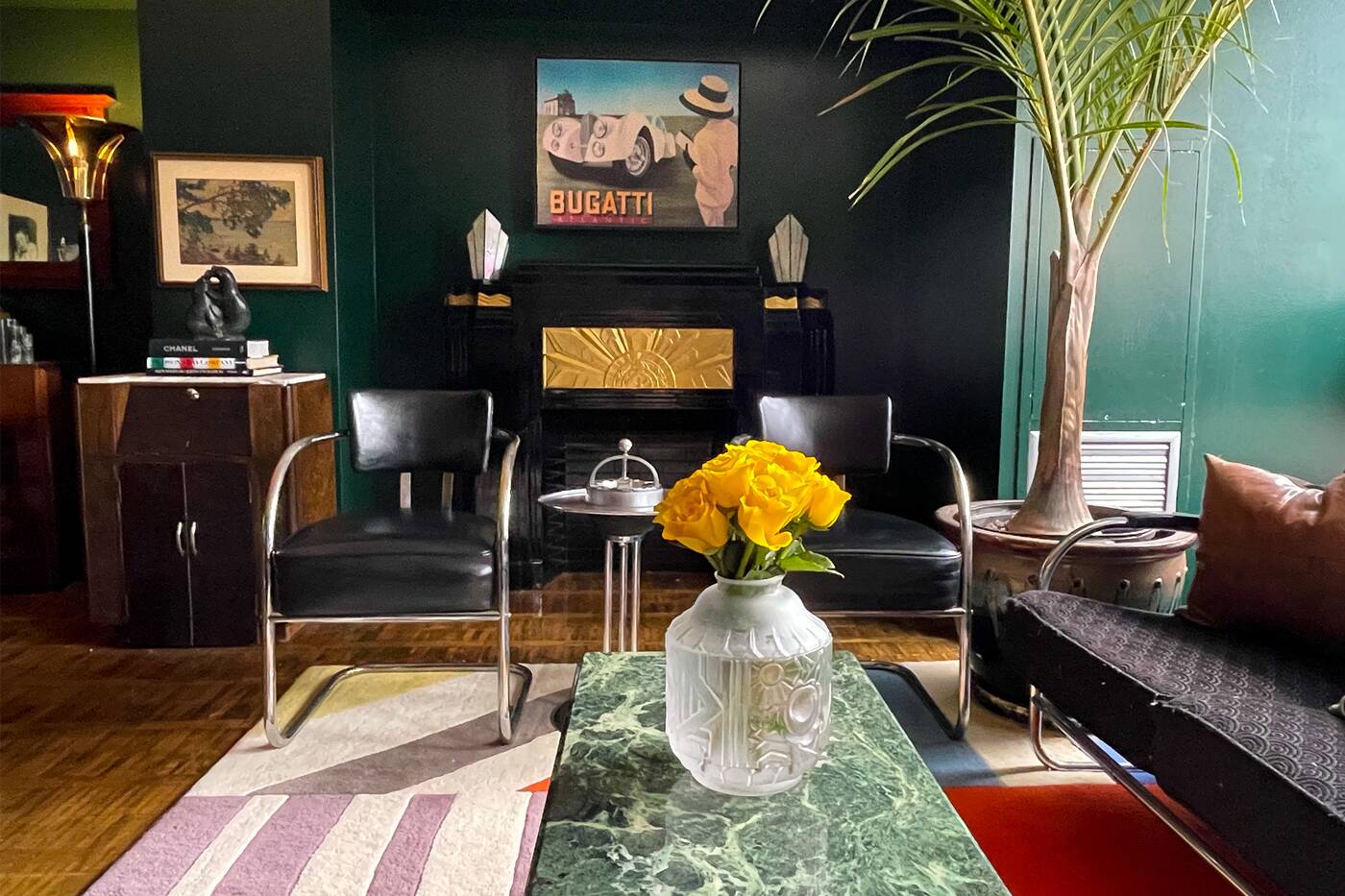 This was a fireplace from a Forest Hill home.

Stokes says he is done decorating his apartment for now and he is not actively searching for new items for himself. In fact, he recently sold six of his pieces to the set decorator of The Umbrella Academy. They will be used to decorate an Art Deco house in the show.

Now, Stokes has turned to helping others find pieces they love for a decent price."I'm still tapping into my love of the era and quality restoration, but now I'm not focusing on me, I'm helping others."

For anyone looking to add some Art Deco pieces to their home, Stokes advises to "be patient and not look for it to be perfect." All it takes is a little work and you can restore a piece to its original beauty.

"The sense of accomplishment and happiness you get from restoring a piece is 10 times better than if you bought it in perfect condition."