More than 1,700 people have now died in Toronto from COVID-19, according to public health officials, but the true toll of this virus on our city has yet to be seen in full — particularly by way of which local businesses will still be standing when the pandemic ends.

More than 140 bars and restaurants alone have closed since the first emergency order was first declared in March, and with Toronto under lockdown yet again, we expect to see many more.

Business owners had been largely understanding and even supportive of their forced closures since the pandemic hit — most people are keen to do their part, after all, in stopping the spread of COVID-19 — but sentiments took a sharp and sour turn in late November when Doug Ford's provincial government deemed big box stores safe to stay open. 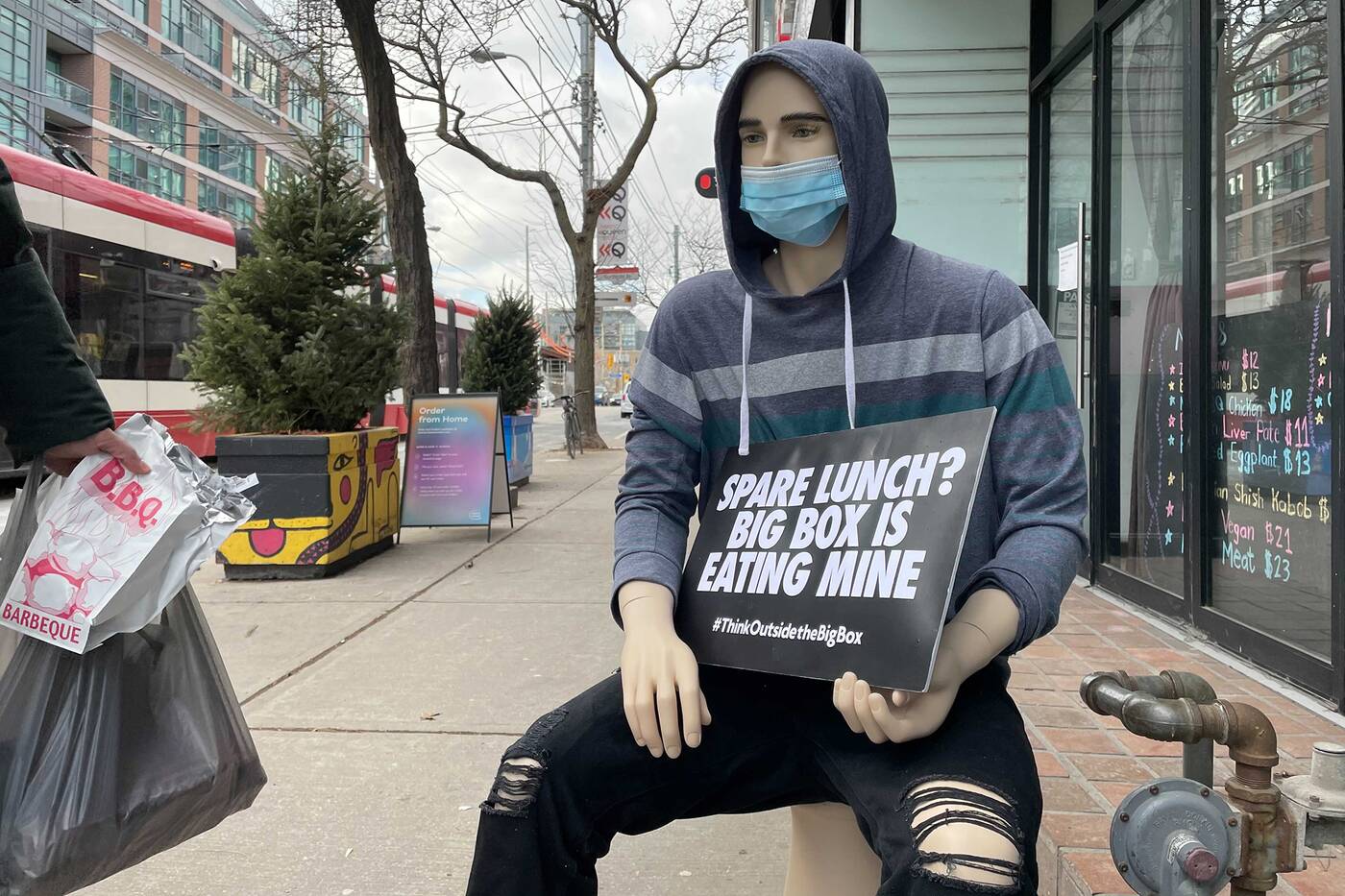 A new campaign from the Toronto Association of BIAs is encouraging shoppers to 'think outside the big box' this holiday season. Photo by Lauren O'Neil.

If Walmart, Costco, Whole Foods and even The Bay (at one point) are cool to reopen with hundreds of customers inside at a time, why have local retailers been ordered to shut their doors for a full month leading up to Christmas?

Even the premier himself admitted that the move was unfair, albeit necessary, he says, to maintain supply chains.

Many Ontario residents aren't buying it, figuratively or literally: They're boycotting big chains and pledging to exclusively shop local this holiday season.

Small business owners have been warning for weeks that this is the only way they'll stay afloat during what's normally their busiest time of the year. It's either "buy local or bye-bye local," as some people put it during a protest of unfair lockdown restrictions on Danforth and Broadview Avenues last week.

A similar demonstration, this one organized by the Toronto Association of BIAs, brought unused mannequins out into the streets with signs of their own to express the concerns of local retailers across the city.

The mannequins, described by PR people as "out of work," appeared along West Queen West Tuesday morning outside businesses such as Helen + Hildegard, Bu'na Coffee and 817 Sports Bar. 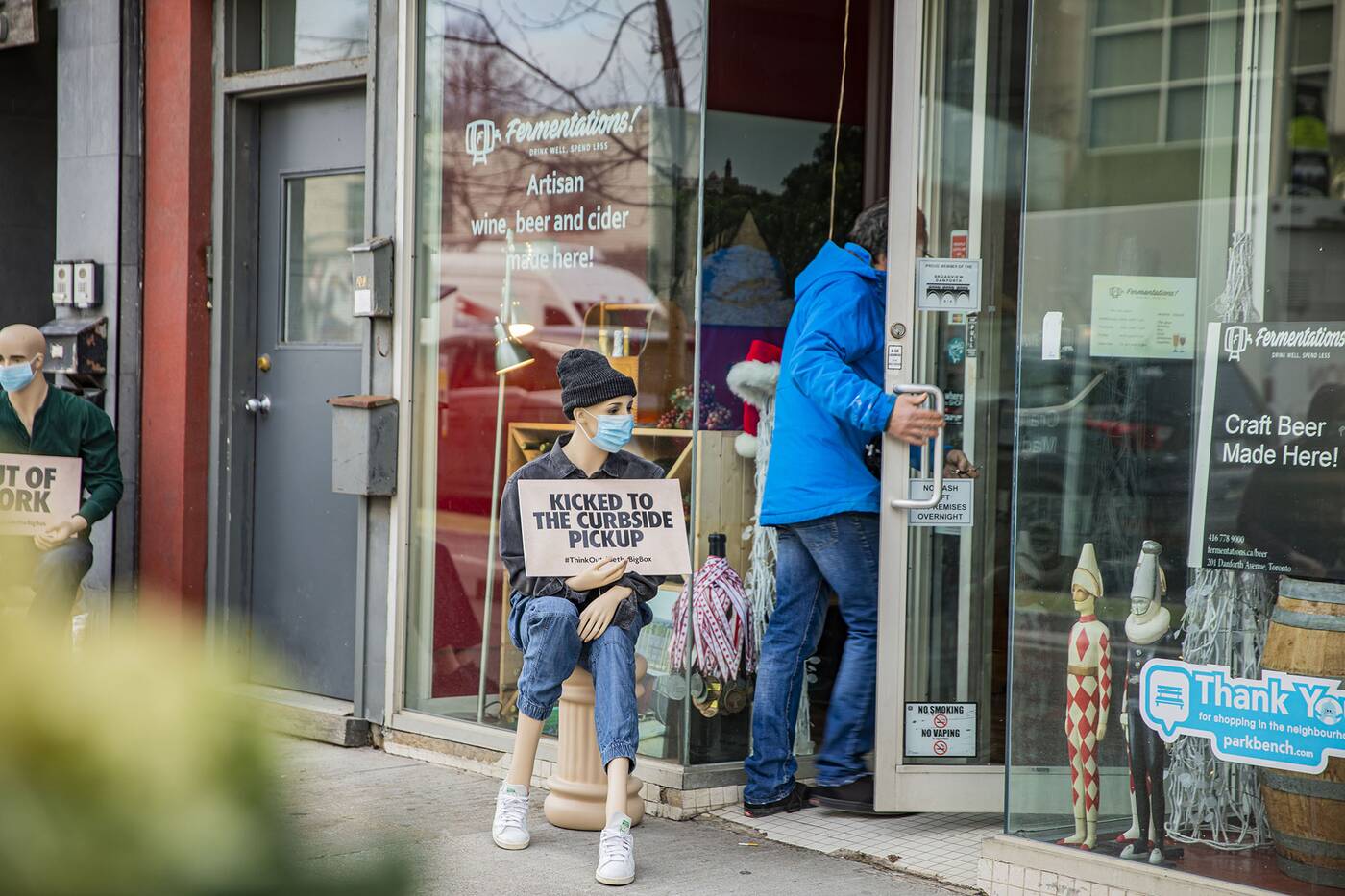 "Hungry for customers," "kicked to the curbside pickup," and "Spare lunch? Big box is eating mine," read a few of their signs.

Along the Danforth, mannequins holding signs such as "Ford sanitized his hands of small biz" and "any customer helps" could be seen in front of Factory Girl, Body Blue, The Clay Room, 7 Numbers and Irina Rappaport. 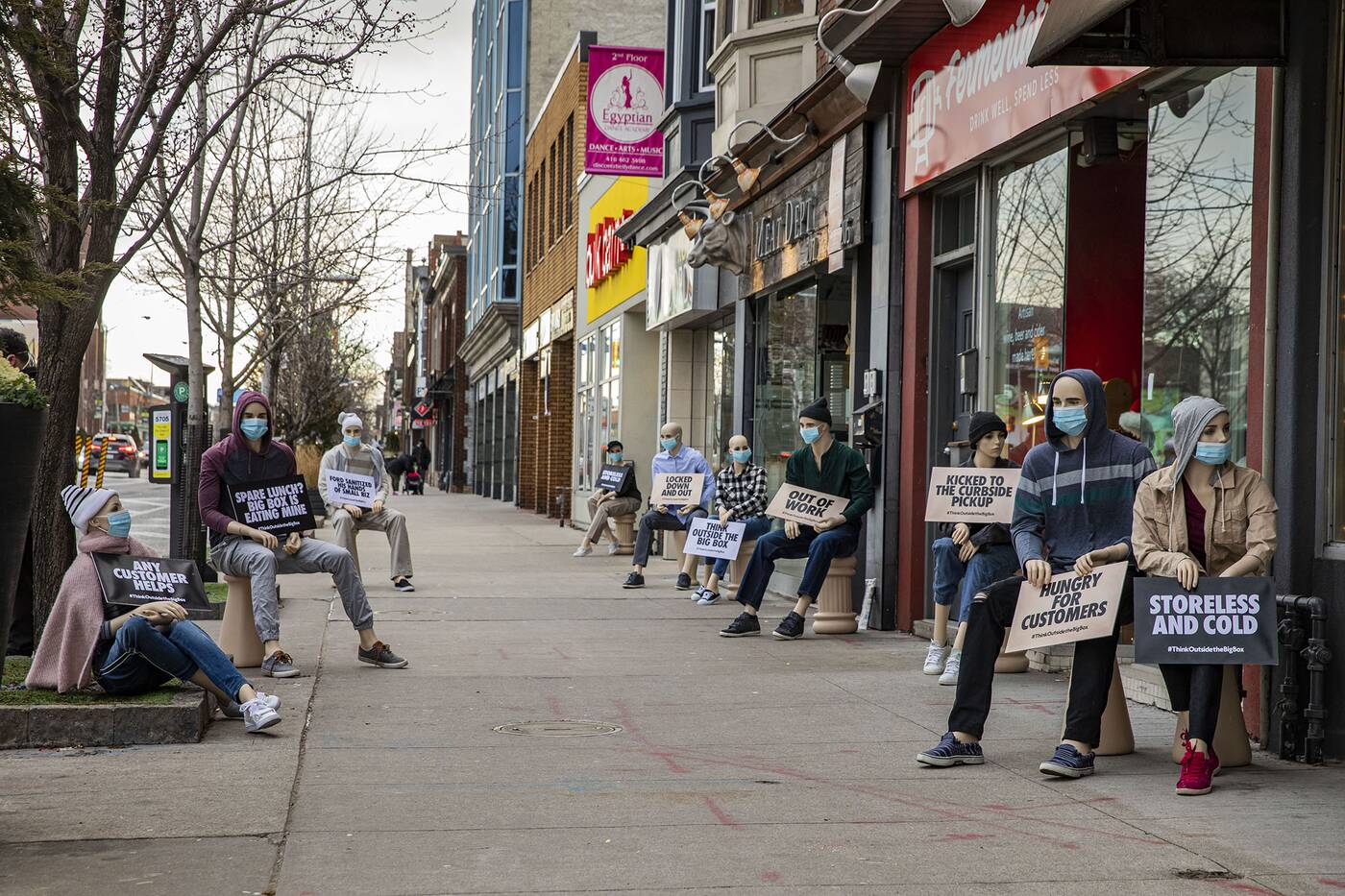 When grouped together, the mannequins looked quite creepy — which is likely the point. Photo by Shereen Mroueh.

It is not clear how long the mannequins (or the lockdown, for that matter) will remain in place, but their group message was clear: Without the support of customers — or better yet, a change in the provincial rules that allow big box stores to open while independent shops are closed — local businesses won't survive.

Mannequins may be inherently creepy, but the thought of a Toronto with nothing but Walmarts and Burger Kings is downright scary.

There's a huge Crocs warehouse sale near Toronto this weekend