Hoi Bo has been open for just 6 weeks, which explains its lack of signage amidst the steel doors and brick facades of the Distillery District . Rather, it's announced by its signature export--a wealth of finely crafted bags. 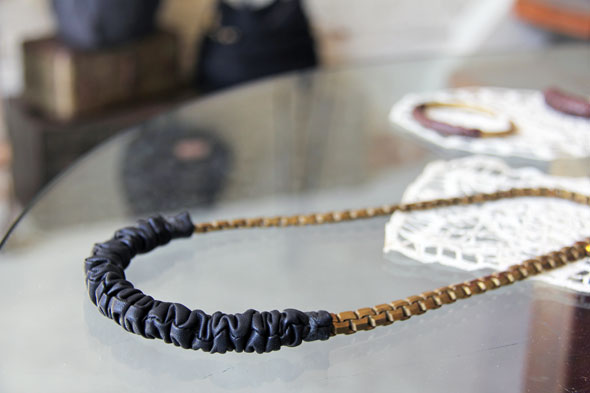 When I stop by, owner and designer of the brand, Sarra Tang, is showing the latest collection at New York Fashion Week , but Annie Lum is more than happy to chat. She tells me that the retail expansion follows from the brand's original 400 sq. ft. studio, just down the street in the Case Goods Warehouse . 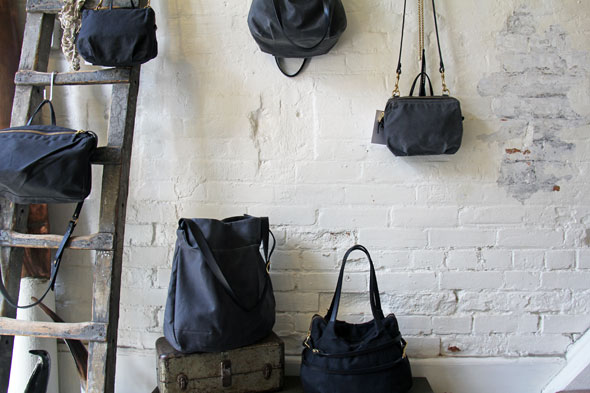 The new stand-alone shop presents a range of opportunities and challenges for the Hoi Bo team--whereas previously, they could hunker down in the studio and focus on production, while clients came directly to them, now they're tasked with saddling the entirely different beast of retail management. Rewind a bit further, and Tang was handling production of the line on her own, from sourcing the materials to sewing.

Tang is entirely self-taught, and the genesis of Hoi Bo came about when she began experimenting with hand-dyeing cotton bags. Now, each item in the store has an element of hand-crafting to it, from something as minute as a wrap-around detail on a strap. 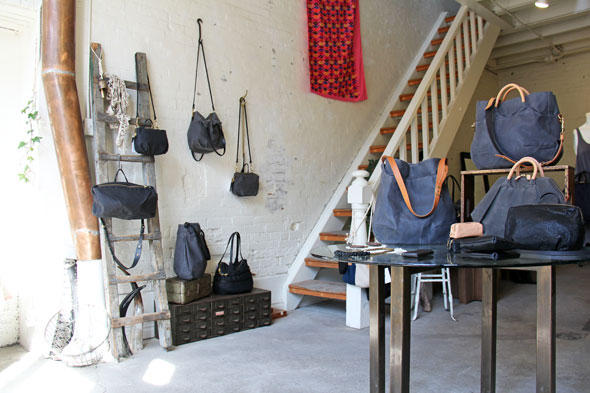 What I most want to say about Hoi Bo isn't eloquent: I, quite simply, like it there. The easy decor--still in flux, and waiting for more leather accents--the rustic appeal of a white-board staircase and white-washed brick, and the general palette of blacks, grays, khakis, and navy blue (which will soon be joined by olive). The look is minimalist, sleek, elegant, and dare I say, pragmatic. But best of all, it's cohesive. 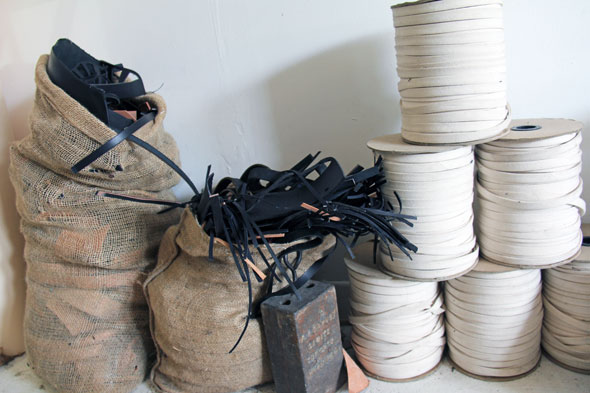 The fabrics and leathers are supple and varied. Lum lets me compare the stiffness of a brand new cotton canvas satchel coated in beeswax (priced between $195 for small bags to $740 for larger ones) to the relative malleability of the same fabric several months later--it's softened like leather, a certain sheen has emerged, and most impressively, it's stain-free. "Nothing is weather-proof," Lum tells me, "but these are certainly weather-resistant." 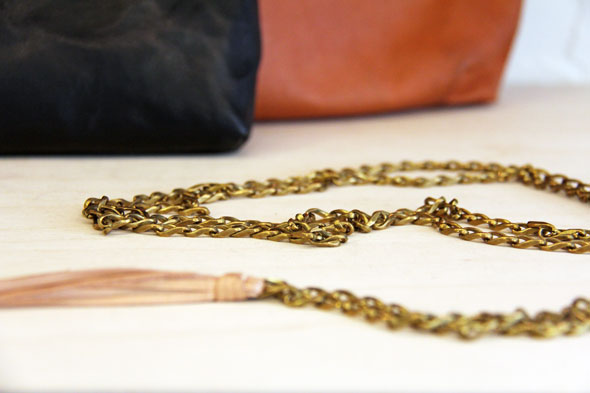 Their leathers are full-grain and vegetable-tanned (a far less toxic process than chrome tanning), and you'll find small kangaroo leather pouches ($98-$118), a wealth of cowhide offerings, and beautifully textured lambskin, including a rich washed lambskin purse ($360) that was then waxed for additional texture and endurance. 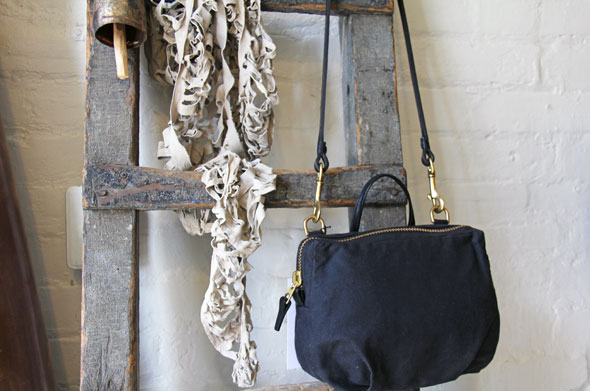 Eccentric pieces include a one-off fish-skin pocket ($90), sized approximately for holding reading glasses, and a beautiful piece of shredded, bleached leather that's almost aquatic. I fall in love with the latter, and ask if it's for sale. It's not, as it was previously incorporated into necklaces, with no plans to revisit the design. On the heels of this, I'm told that they don't do custom work, and I grudgingly respect this-- although I'm sad to put the fantasy of Daryl Hannah circa Splash to rest. 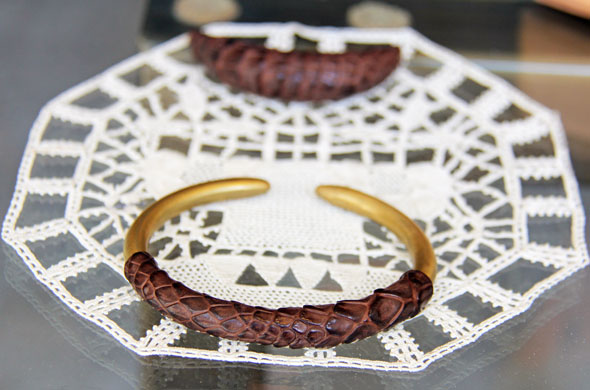 The jewellery on offer incorporates leather and metals, as with a pointed-edge alligator cuff, and averages between $100 and $300. The clothing is simple, clean-cut, and reminiscent of two of my Toronto favourites, Ruins and Thieves (both recently closed). 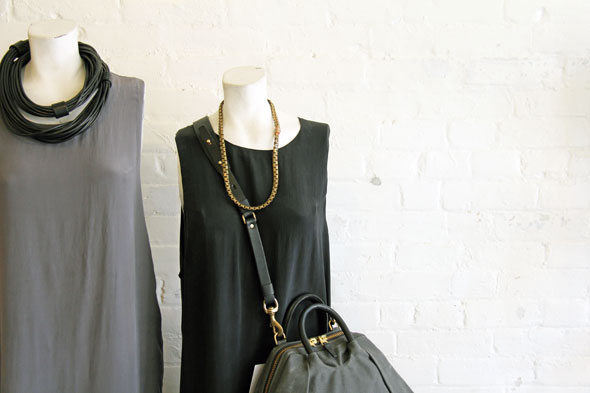 Hand-sewn crepe de chine shift dresses ($390-$490) are available in muted hues and several cuts, and meant to work as transitional pieces--"with a bright bandeau in warm weather, or a turtleneck in winter," Lum says. There are also linen scarves ($190), some of which are gently accented with metallic thread, and cotton-blend, cropped T-shirts ($40-$90). 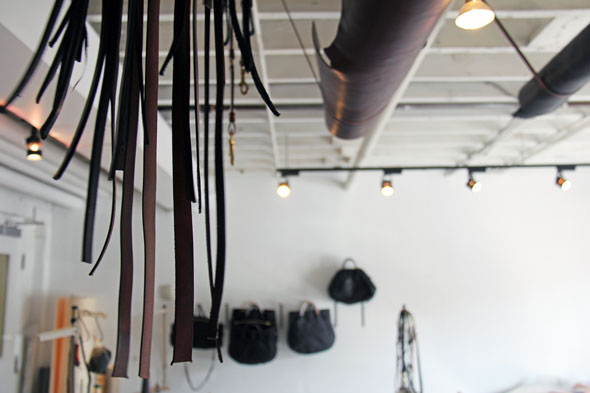 Everything is made in their factory space, which is open to the public under reduced hours. I have the opportunity to pop my head in, and am told that the space might become a showroom for prototypes and one-of-a-kind items. As it stands, it's a visceral reminder of the craft work and effort put into making each piece. 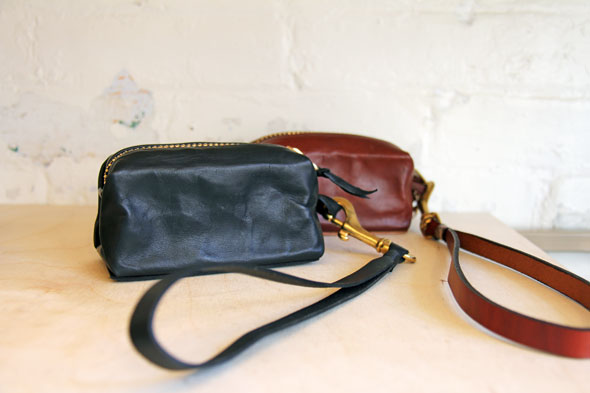 The pieces have an inherent androgyny, but surprisingly, the shop carries only one unisex bag. Men's products are next on their roster--in response to overwhelming demand--with hand-sewn wallets expected in-store around Christmastime. Also in the pipeline is a re-conception of the brand--expect a new logo, new signage, and more focus on clothes. 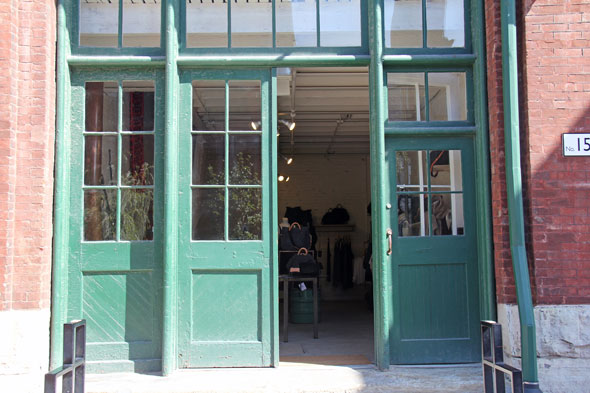