An outpost of Toronto-based brisket restaurant Adamson BBQ, which rose to infamy when it opened its Etobicoke location for three days of maskless indoor and outdoor dining in direct defiance of provincial lockdown orders last fall, has been shuttered by its landlord for not paying its rent.

A letter posted on the inside of the brand's Aurora location at 15195 Yonge — near Wellington St., less than an hour north of the city — indicates that owner Adam Skelly has racked up $48,691.74 in rent arrears.

As such, a bailiff company has posted the notice of distress on behalf of landlords Soscia Investments Inc., giving the establishment five days to pay the overdue rent, or else lose whatever goods and equipment they have on the premises.

The locks on the restaurant's doors have also been changed. 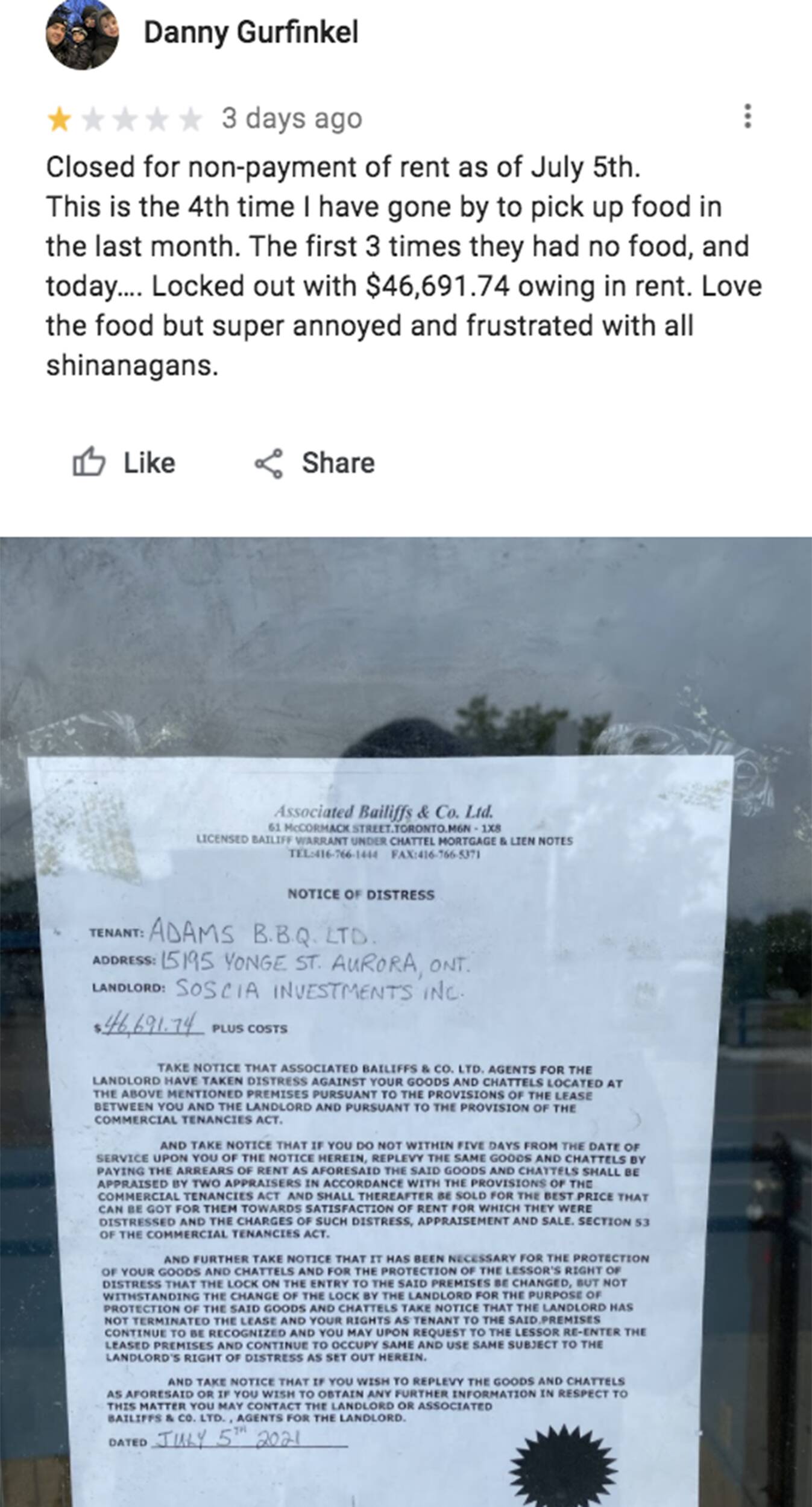 A recent one-star Google review showing that Adamson BBQ Aurora has been closed for non-payment of nearly $50k in rent.

The notice, which is dated July 5, was shared by a dissatisfied customer online via a Google review on July 12, meaning that the five days for Skelly to settle up with his landlord have now well passed.

As the resident noted in their review: "This is the fourth time I have gone by to pick up food in the last month. The first three times they had no food, and today... locked out with $46,691.74 owing in rent. Love the food but super annoyed and frustrated with all shenanigans."

Though no one from the Adamson team replied to blogTO's request for comment by the time of publication, the bailiff corporation was able to confirm that the business does in fact owe the landlord the aforementioned amount in rent money and that it does not intend to stay at the Aurora location.

Meanwhile, Skelly is working on appealing the recent rejection of a court case he launched against the province.

In the constitutional challenge, Skelly argued that by imposing stringent lockdown measures, the government suspended constitutional rights of residents and businesses without basis.

At the time of his opening stunt in November, bars and restaurants were limited to takeout and delivery service only, with both indoor and outdoor dining prohibited.

"In its response to the Covid-19 virus, the Governments (Federal, Provincial and Municipal) have invoked extraordinary executive powers predicated on unsubstantiated scientific and legal grounds with catastrophic consequences to people in Ontario, Canada and indeed throughout the world," the case's preamble reads.

The Ontario Superior Court judge assigned to the matter late last month determined that she did not have the jurisdiction to proceed with the case due to some issues with Skelly's paperwork, so dismissed it.

"This is the first time a Notice of Constitutional Question served and filed months in advance with a huge evidentiary record was refused to be heard in a Superior Court in Canadian history. The rule of law has been cancelled, once again," Skelly's team wrote in blog and social media posts following the move.

"We will see this through to the Court of Appeal and are prepared to take this all the way to the Supreme Court. The evidence and the law are stacked in our favour. Please share our 11 expert reports worldwide and speak out."