The drama of Adamson BBQ's illegal opening in the face of stringent pandemic lockdown measures continues Thursday, with authorities moving in early this morning to change the locks on the eatery's doors in anticipation of proprietor Adam Skelly welcoming customers for a third day in a row.

HAPPENING NOW: Police are moving in at Adamson Barbecue.@CityNews @BTtoronto cameras captured police entering the location around 6am this morning.

Adamson has opened illegally for two straight days in full defiance of the lockdown.

The Etobicoke location of Skelly's restaurant has this week become a meeting place for those fervently protesting the forcible closure of non-essential businesses and other COVID measures after a year of never-before-seen financial hardship due to the health crisis and consequent government-led shutdowns.

The restaurateur publicized on social media that he was planning to open for business as usual on Tuesday morning, and after more than an hour of successfully doing so, law enforcement moved in, but didn't actually order the spot to shutter until after its planned closing time late in the afternoon.

Skelly opened his doors for maskless indoor and outdoor dining again on Wednesday, drawing an even larger crowd than the day prior, leading to multiple charges under Ontario's Health Protection and Promotion Act for hosting illegal gatherings, flouting dining regulations and operating without his business license, which was taken from him after the first day of shenanigans.

He is also being investigated by the City for potential licensing, zoning, public health, Ontario Building Code and Ontario Fire Code issues.

Still, Skelly yesterday told the Toronto Sun, the only media outlet he's sanctioned to cover the ongoing saga, "I plan to have five times the meat for Thursday so I won’t run out."

As a result, Toronto police changed the locks on the establishment around 6 a.m. today to hopefully prevent Adamson from operating.

A very upset owner of Adamson Barbecue arrives at his Etobicoke location now shut down after city staff/Toronto Police with locksmiths entered bldg around 6am and changed all the locks to prevent indoor dining room from opening for third straight day-defying lockdown rules pic.twitter.com/nQqRx37jOv

Skelly arrived on the scene to speak with the cops two hours later, and posted an Instagram story to his 68.6k followers on the Adamson account that simply stated "need locksmith & other hands at Etobicoke ASAP."

The barbecue place's opening hours, which it has been operating within for the past few days, are 11 a.m. to 4 p.m. Yesterday, he sold out of food within an hour.

Mayor John Tory said in a press conference that he hopes law enforcement "throws the book" at Skelly, adding that he would whip out the concrete blocks the City famously used to block illicit cannabis dispensaries if it was up to him. 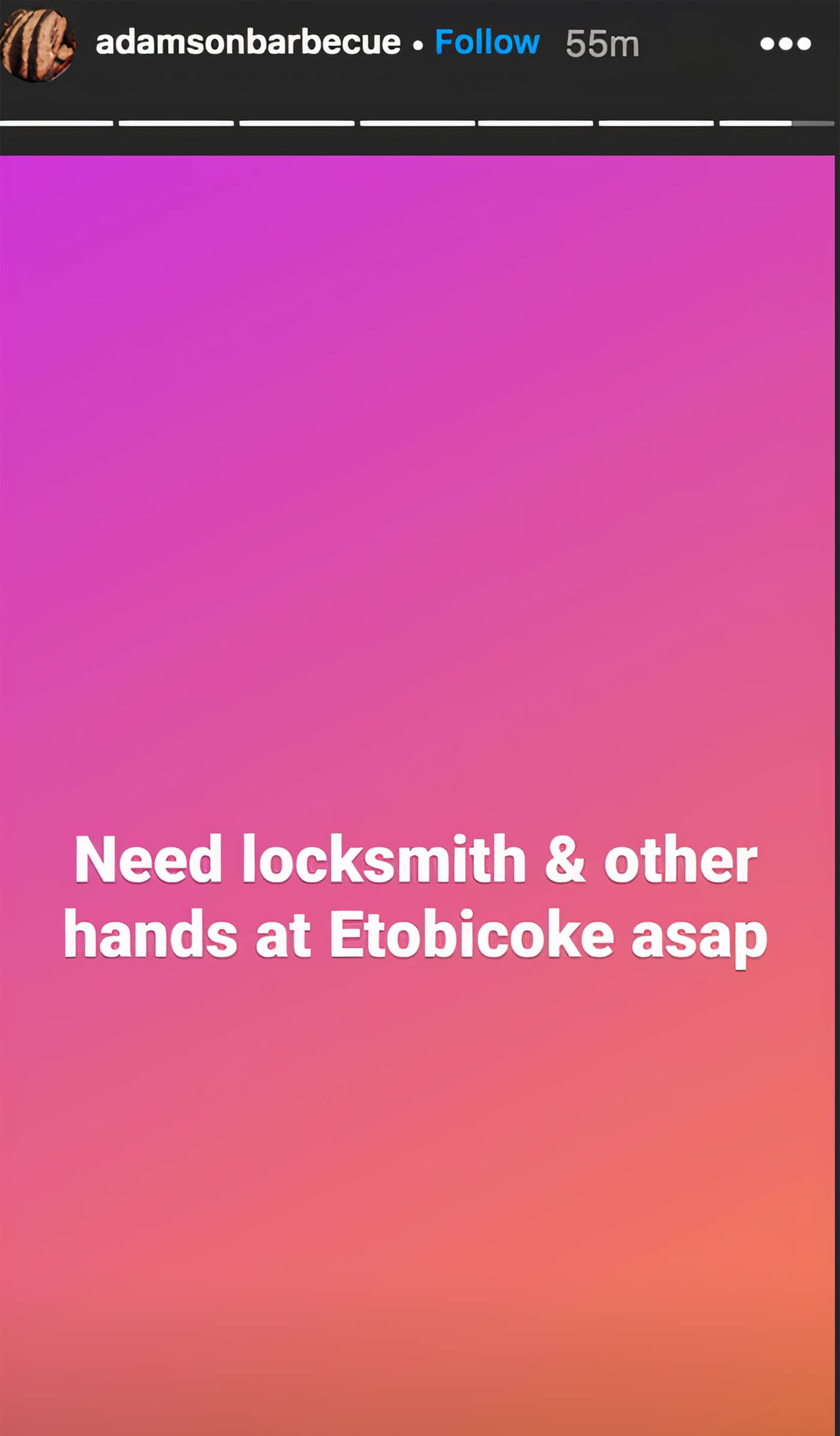 Ontario Premier Doug Ford, on the other hand, said during Skelly's first day of unlawful operations that he "wished" the business owner would follow the rules, but that he "can't get angry at any business person, they're hurting right now and they're struggling and they're doing everything they can to stay afloat."

He changed his tune Wednesday, saying in yesterday's provincial media briefing that Skelly was being irresponsible, ridiculous, and acting unacceptably.

"I was nice to the guy yesterday, but buddy, let me tell you something, you’re putting people’s lives in jeopardy," he said. "I always try to be nice the first time, but this guy is just totally ignoring public health officials."