Toronto's Adamson Barbecue is now home base for anti-lockdown protesters

One Toronto restaurant owner's apparent attempt to stick up for small businesses that have been "singled out" by newly-implemented lockdown orders has blossomed into a full-on anti-masker rally, complete with far-right conspiracy theorist signs and white people screaming "FREEDOM!"

As promised, Adamson Barbecue owner Adam Skelly reopened the Etobicoke location of his controversial restaurant chain on Wednesday morning in defiance of both provincial and municipal regulations.

Skelly opened the doors to his Texas-style BBQ joint at 11 a.m. on Tuesday for indoor dining despite strict grey zone lockdown rules that restrict restaurants to take-out and delivery only.

After a dramatic day filled with visits from police and bylaw enforcement officers, the restaurant was finally ordered to close by Toronto Public Health late Tuesday afternoon.

The city is still investigating the business for operating in contravention of the Reopening Ontario Act, as well as for various licensing, zoning and public health compliance issues, and have thus not yet charged Skelly for anything.

Police did tell reporters on Tuesday, however, that they'd be enforcing the closure order today and removing patrons from the building.

Some three hours into today's illegal operation of the business, officers have yet to arrest anybody.

Skelly and more of his supporters than ever are back today for round two, and it seems as though they're even more defiant than they were yesterday.

In fact, when police told protesters inside the restaurant that they could be charged for refusing to leave, several of them let out conspicuous laughs.

Others lined the restaurant's property to yell at journalists, who've reportedly been subjected to verbal abuse all day (save for those who work at heavily right-leaning outlets.)

It's become clear that this situation has escalated beyond barbecued meat.

Protesters — including at least one well-known white supremacist — are using Skelly's business to denounce lockdown orders in general, as well as communism, government censorship and the use of facial masks.

Self-described white nationalist Paul Fromm, has arrived to support Adamson BBQ. I wonder if this is the type of support owner Adam Skelly was hopping for today when he opened his restaurant? I’ve asked Mr. Skelly for an interview multiple times today. He’s declined. pic.twitter.com/23kO5HJPaX

Skelly, for his part, appears to be enjoying the attention. 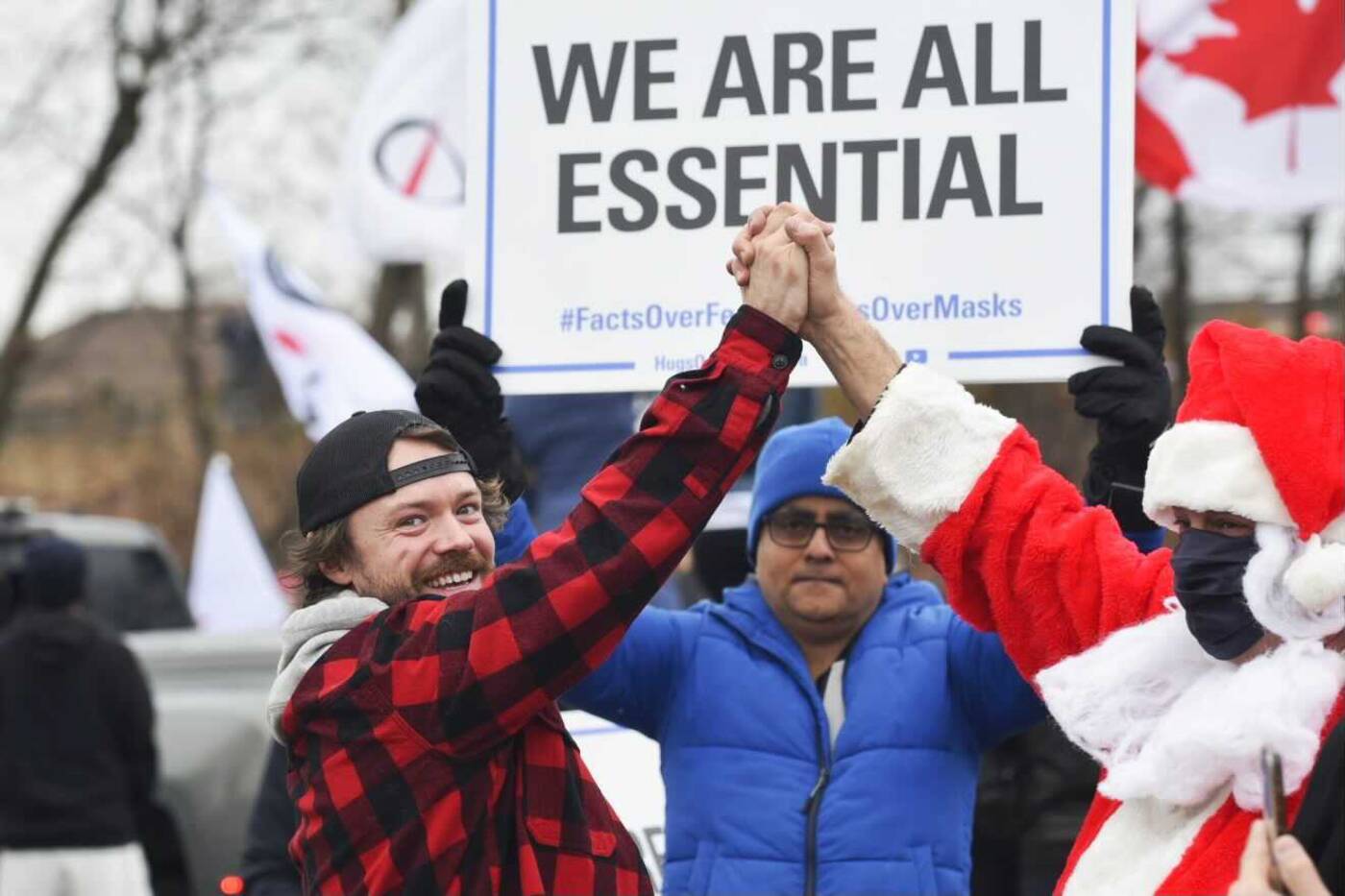 The business owner told reporters shortly after 1 p.m. that he had sold out of food and was closing for the day, but that he had once again evaded any sort of charge.

The maximum penalty upon conviction for violating the Reopening Ontario Act, for the record, is up to $100,000 for individuals plus a term of imprisonment of up to one year.

Skelly says Adamson Barbecue will reopen again tomorrow regardless. His outspoken supporters will no doubt be at the scene en masse once again to fight for their right to spread a deadly viral illness.