After the much-publicized hubbub that ensued when Toronto restaurant Adamson BBQ decided to flout lockdown restrictions and open its Etobicoke location for indoor dining service yesterday, owner Adam Skelly is at it again, implying on the brand's social media that he will be illegally welcoming diners once more today.

It appears that Adamson BBQ in Etobicoke is planning to open this morning despite being shut down by Toronto’s medical officer of health, once again defying provincial lockdown orders. @CityNews pic.twitter.com/STymeNLWMT

Around 10 p.m. on Tuesday — hours after officers arrived at the eatery at QEW and Royal York Road, left, then returned to shut it down for defying Ontario's Health Protection and Promotion Act — Skelly posted an Instagram story that simply stated "Etobicoke. 11 am to sold out. Dine-in" overtop of a cartoon rendering of himself standing on a cop car, wielding a spatula and telling police "We're not closing." 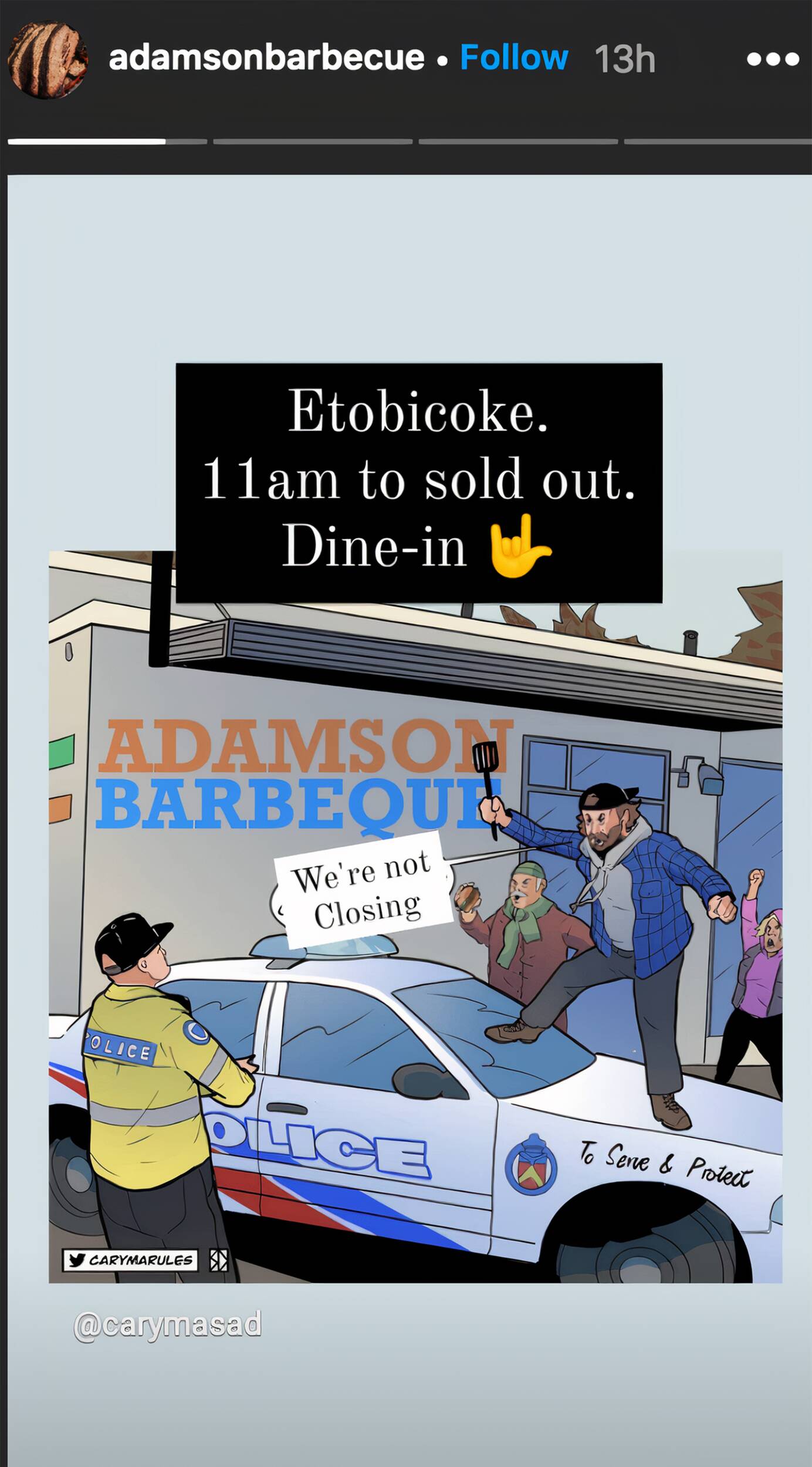 A story posted Tuesday evening by @adamsonbarbecue on Instagram.

Twelve hours later, around 10 a.m. today, another suggestive story was posted from the Adamson account, this one circling the outpost's Wednesday operating hours of 11 a.m. to 4 p.m., as listed on Google, with a GIF of an OPEN sign. Supporters were lining up from early this morning as a result.

Crowds are gathering outside Adamson Barbecue. The restaurant plans to reopen for lunch today despite being shutdown by Toronto Public Heath - 📹 @hectoravasquez #Toronto #AdamsonBarbecue #Lockdown pic.twitter.com/9Vett9Maaj

Shortly after the last of the cryptic posts, Skelly confirmed to Toronto Sun reporter Joe Warmington that he will indeed be opening Adamson's doors for lunch today as he stood outside of the establishment amid customers eager to fight the lockdown and devour some ribs maskless indoors or outside on picnic tables, as they did yesterday.

Adam Skelly speaking with my colleague Joe Warmington — Adamson's BBQ will be opening for lunch today, in defiance to closure orders delivered by the City of Toronto yesterday https://t.co/gEGIFWq8OT

While talking on the topic Wednesday morning, Toronto Mayor John Tory said authorities will be on scene ASAP to "throw the book" at Skelly, adding that his restaurant "shouldn't be open at all if this man was a respectable citizen."

According to blogTO correspondents on the scene at the time of publication, police are indeed inside the business — the lawn of which is littered with anti-lockdown signs from organization The Line Canada — speaking with Skelly and his lawyer.

Many are wondering what will happen, if anything, given that enforcement yesterday was not swift and immediate, and that the City stated it would not be laying charges until later in the week, if at all, saying in a statement that "investigations require the gathering of all the facts before enforcement action can be taken."

In response to the incident, Ontario Premier Doug Ford said that he "wished" that Skelly and his team would just follow the rules, but that he "can't get angry at any business person, they're hurting right now and they're struggling and they're doing everything they can to stay afloat."

Skelly potentially faces hundreds of thousands in fines and jail time of up to one year if convicted for the violations of pandemic orders — but perhaps the free publicity and the satisfaction of fighting for the plight of small businesses amid lockdown will make up for it.