The history of the Black Bull Tavern in Toronto

The sign attached to the south side of the Black Bull Tavern states that it was established in 1833. Sources differ on the year the tavern opened, some stating the year 1833 and others 1838.

Whichever date is accurate, it is undoubtedly one of the oldest watering holes in the city.

However, it cannot claim to be the oldest continually serving tavern in Toronto as for several decades the building was not employed as an ale house. The Wheat Sheaf at King and Bathurst outranks the Black Bull in this regard. 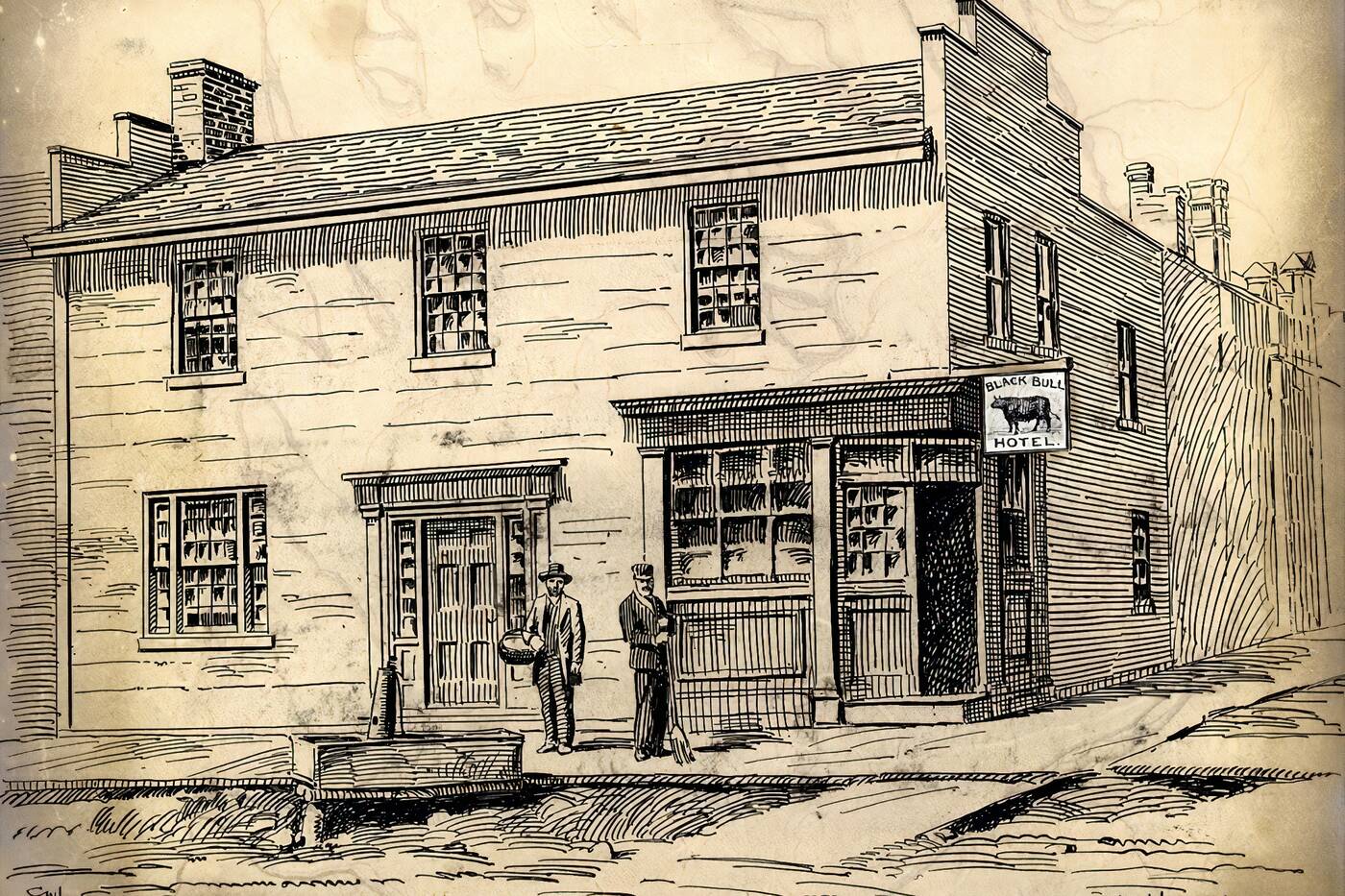 Illustration is from Robertson's Landmarks of Toronto, 1894. A swinging sign, a wooden water trough,and pump are beside the tavern on Soho Street.

When the Black Bull opened in the 1830s, the structures surrounding it on Queen Street were of modest height between one to two storeys, constructed of wood — many of them covered with stucco.

Farther west along the street, buildings diminished in number until there were only open fields and stands of timber. No one then could ever have imagined the eclectic, colourful Queen West that exists today.

In the 1830s, the Black Bull was typical of the structures of the period — a wood-frame, two-storey building with a steep-pitched roof.

The main doorway was located at the southwest corner of the premises, allowing patrons to enter from either Queen or Soho Streets, as the tavern was on the northeast corner of the intersection of these two avenues.

The large door on the west side accommodated overnight guests staying in the rooms on the second floor.

Robertson's Landmarks of Toronto, published in 1894, states, "The Black Bull was a favourite stopping place for farmers on their way to town from the west and north-west.” 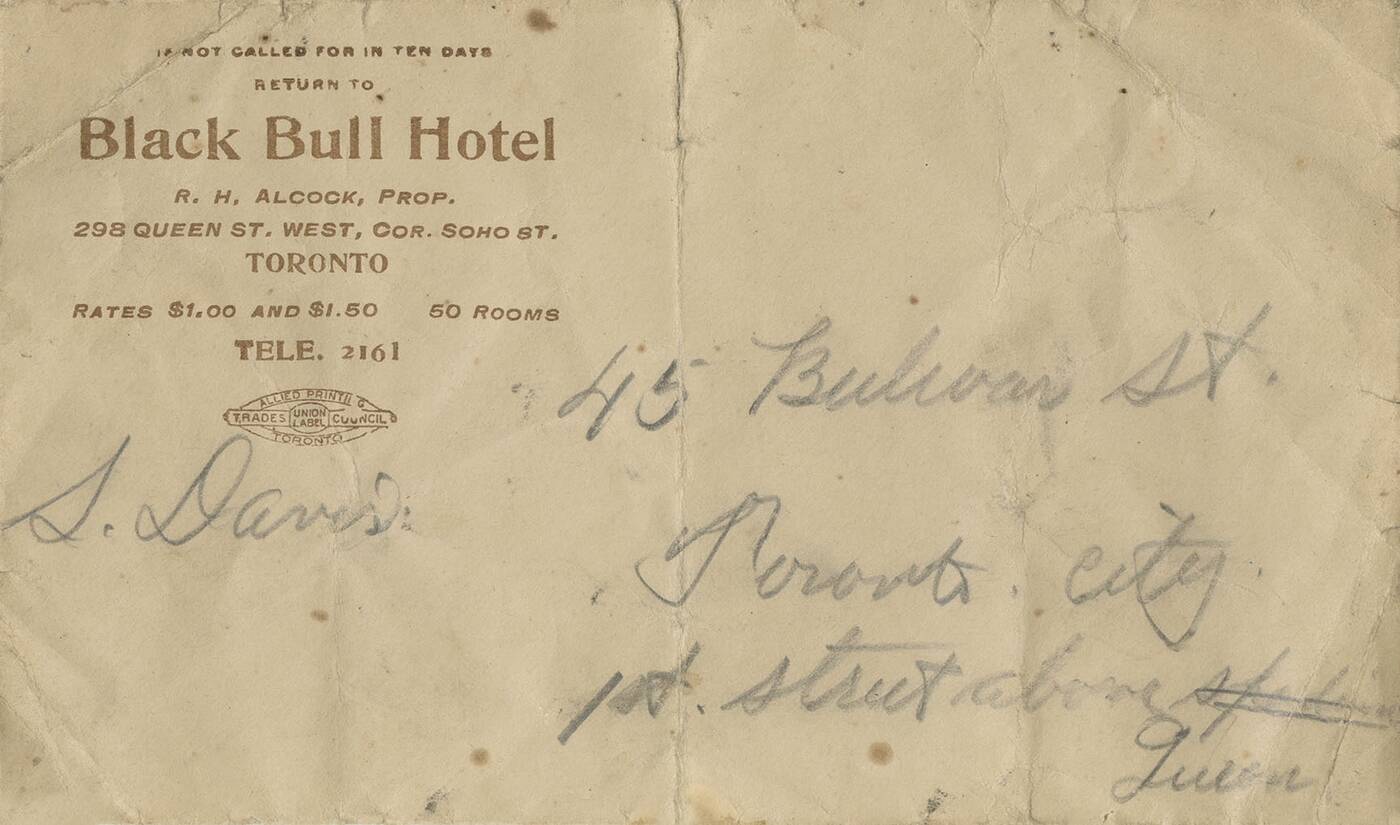 A postcard sent around 1895 from the Black Bull Hotel, addressed to S. David of 45 Bulwer St. From the Baldwin Collection at the Toronto Public Library.

For many, the tavern was central to the life of the community which was continually increasing in size, as dwellings were being constructed to the north and south of busy, commercial Queen Street.

Food and necessities for the homes were purchased on Queen Street, supplemented by two markets within easy walking distance — St. Patrick's and St. Andrew's Markets. It was common for shoppers to visit the Black Bull on market days.

In 1861, the owner of the Black Bull added a third-storey with a Mansard roof. During this year, patrons in the pub hotly debated the merits of Confederation with the other North American British colonies.

In 1885, an extension was constructed on the tavern's north side, on Soho Street. This was the year when John A. Macdonald sent troops to Western Canada to quell the North-West Rebellion.

In 1895, the establishment possessed 50 guest rooms. In 1910, the Black Bull was again extensively renovated — a red-brick cladding employed to encase the entire building.

Sometime after the turn of the 20th century, the Black Bull's name was changed to the Clifton House and it continued to serve the public for several decades under this name. 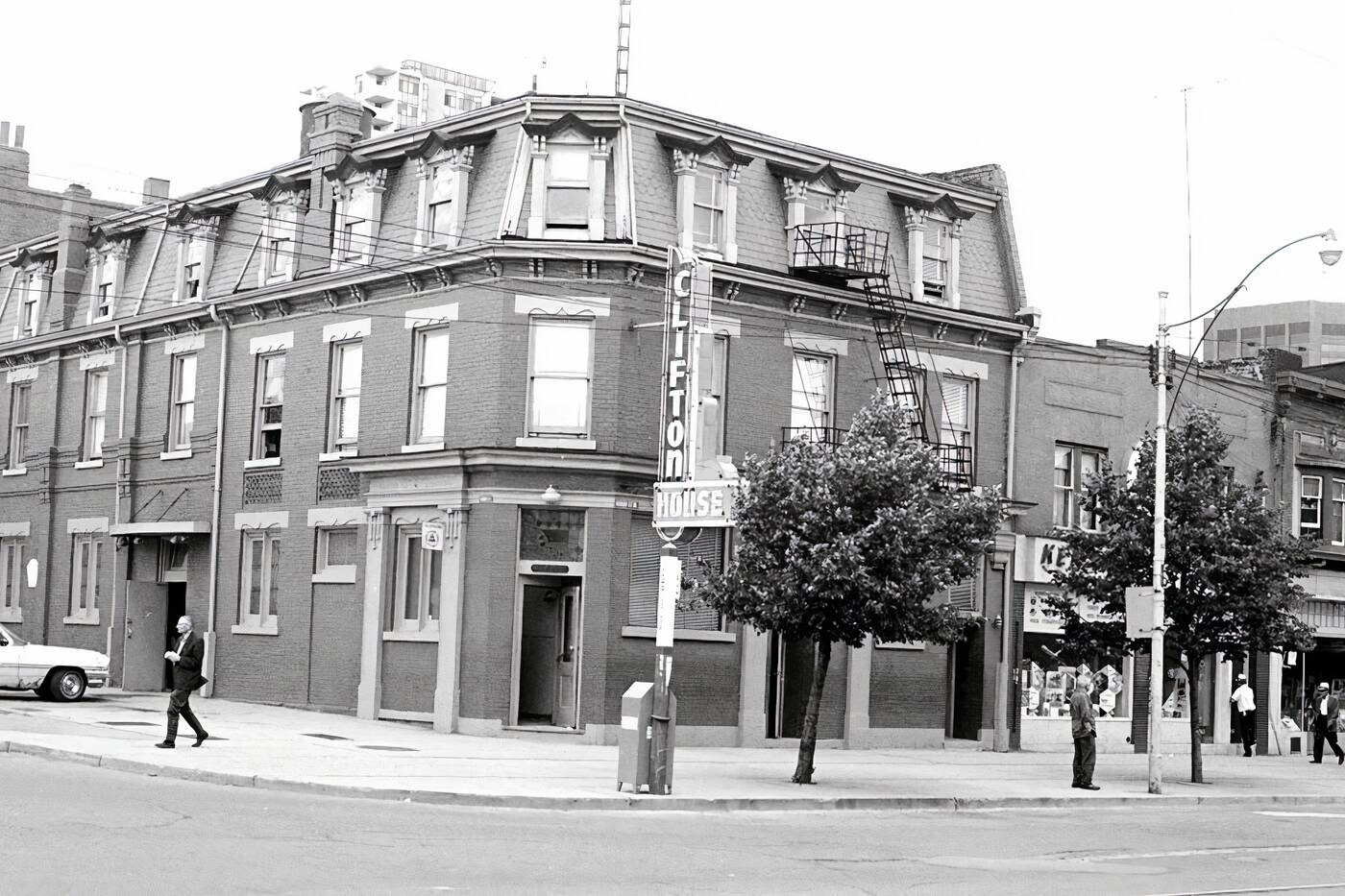 The Black Bull in 1972, when it was named the Clifton House. Photo via Toronto Archives.

However, it reverted back to its historic name, the Black Bull, in 1977. It appears that in this decade, it had a dubious reputation, with the police sometimes summoned to restore order. 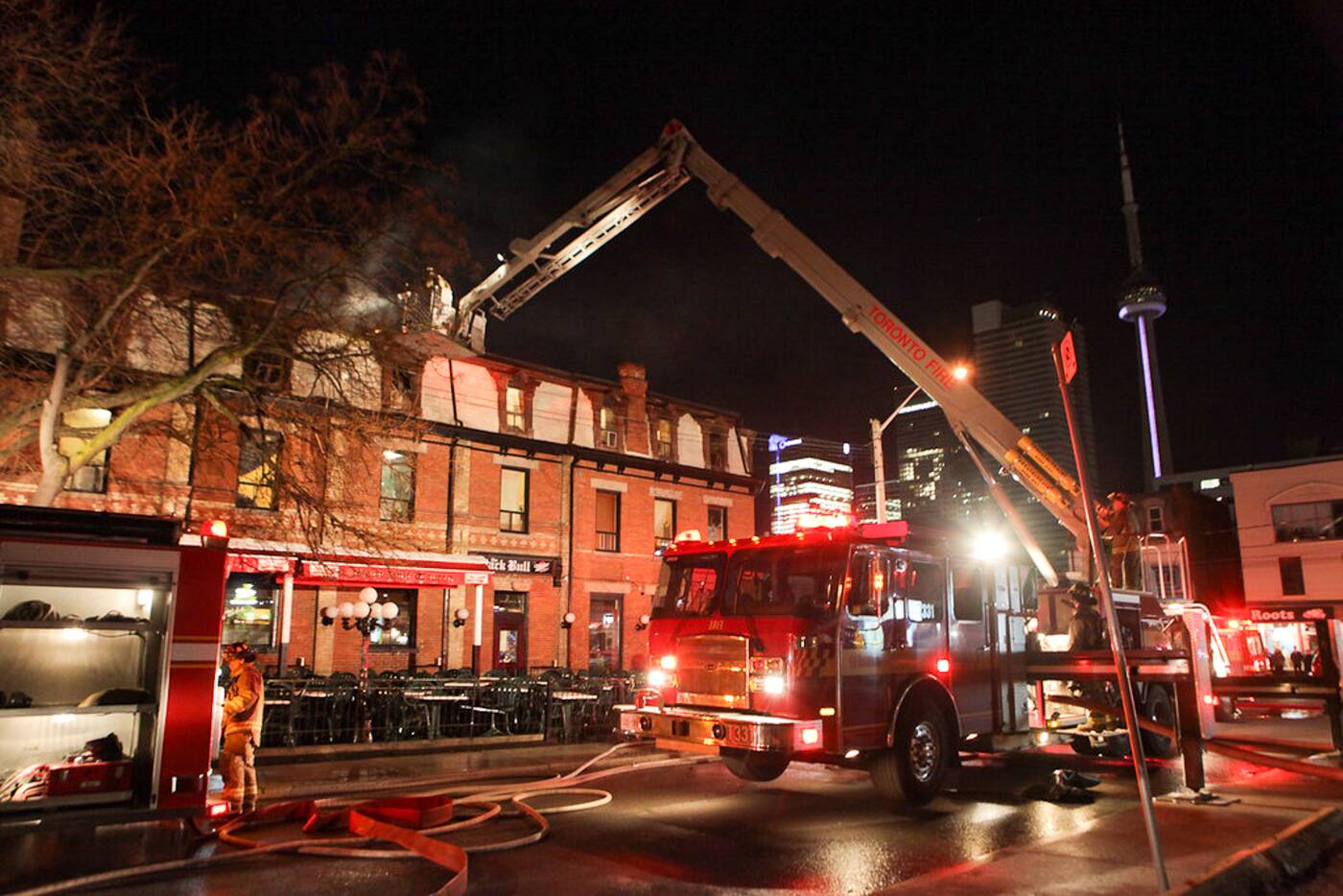 The fire was dramatic, but the building was saved. Photo by Hangar Ent. Group.

In April 2011, Toronto firefighters battled a three-alarm blaze that started in one of the upper rooms. Fortunately, it was contained.

The latest and most popular addition to the Black Bull is the patio, on its west side on Soho Street. It opened in 1981 and is one of the most popular outdoor drinking venues in the city. 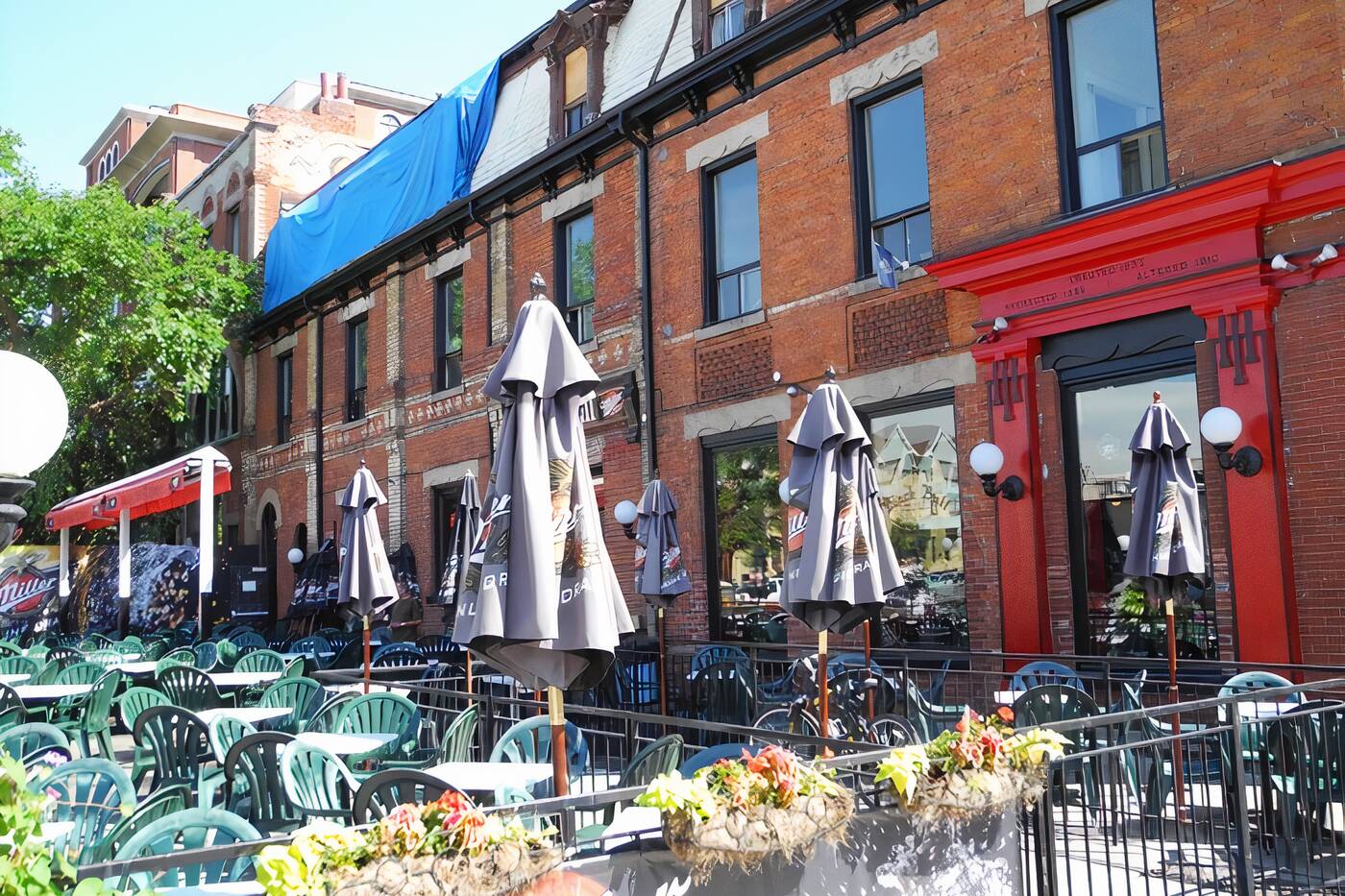 West side of the Black Bull, with the popular sidewalk patio. This photo was taken prior to the restoration, the original slate tiles on the roof painted yellow. Photo by Doug Taylor.

Today, the pub is an attractive Second Empire style red-brick building, with yellow-brick pilasters (three-sided columns) on the west side of the 1885-addition.

The main door, which at one time was at the corner, has been relocated to the Queen Street side. The slate-rock tiles on the roof survived until 2011, but were painted yellow. 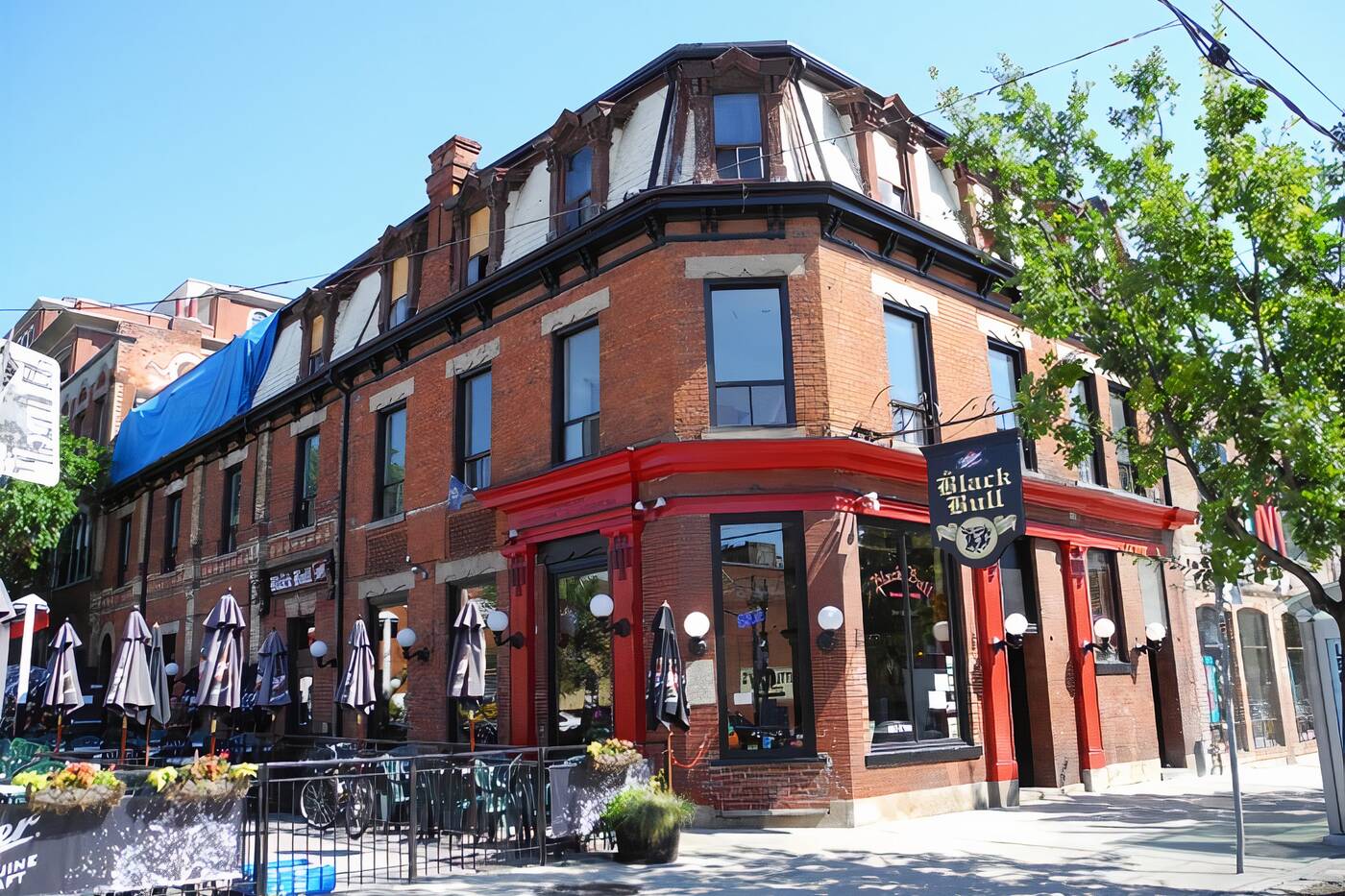 The Black Bull, northeast corner of Soho and Queen Streets. This photo was taken prior to the renovations in 2012. Photo by Doug Taylor.

During the restoration in 2012, the mansard roof and third-floor windows were renovated, and the slate tiles were replaced with asphalt tiles.

The pattern of the tiles was the same as the earlier ones of slate. Though not authentic, they are more in keeping with the original appearance of the building as they are slate coloured.

Doug Taylor was a teacher, historian, author and artist who wrote extensively about Toronto history on tayloronhistory.com. This article first appeared on his site on December 15, 2017 and has been republished here with the permission of his estate. The article has been modified slightly.