The top 35 breakfast sandwiches in Toronto by neighbourhood

In Toronto a good breakfast sandwich is the next best thing to brunch. Better than a bowl of cereal, these handheld creations pack in eggs, bacon, cheese and carbs for a quick and complete meal that can be eaten on-the-go.

Here are my picks for the top breakfast sandwiches in Toronto by neighbourhood.

Schmaltz Appetizing is your ultimate source for bagels, cream cheese and lox. Kiva's bagels get upgraded with toppings like house-cured beetroot or lemon dill gravlax and smoked pastrami salmon.

It's all about morning staples at Sophie's Kitchen. Beyond eggs benny and pancakes this restaurant has a breakfast sandwich featuring Canadian bacon, a fried egg, sharp cheddar, tomate and lettuce on a broiche bun.

Breakfast sandwiches on wood-fired bagels are the specialty at Bagels on Fire. There's plenty of different options all appropriate for the a.m. including the classic egg and cheddar sandwich with a choice of bacon or ham.

Just steps from the entrance to Lansdowne subway station is where you'll find Baddies coffee shop. Beyond beverages the cafe serves up some great eats including their Bikkie. It's a paprika buttermilk biscuit stuffed with a Japanese cheese omelette, chimichurri and red pepper sauce with the option of a pork and fennel sausage patty.

The Epicure Shop isn't just a fine foods store, but also the makers of might fine breakfast sandwiches like The Popeye featuring farm fresh eggs, spinach and melted havarti on a bagel, ciabatta bun or English muffin. 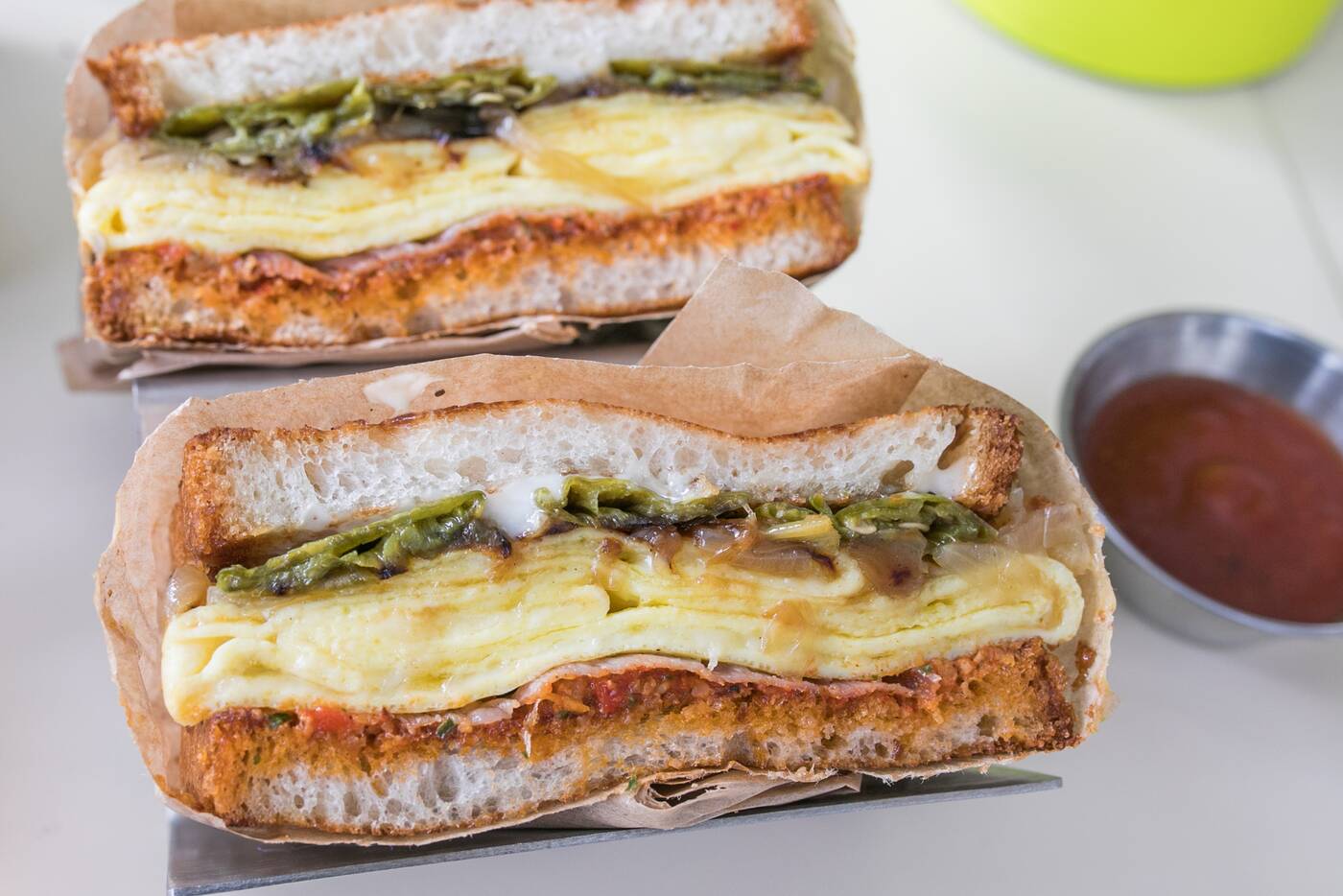 Thick slabs of peameal bacon with egg and cheese on a fresh house-made bun, or a seasonal veggie version, are available as breakfast sandwiches in the morning at Dough Bakeshop.

Modern French restaurant Cluny is the ultimate destination for morning staples. On their cafe menu you can order up their breakfast sandwich that conists of scrambled egg, shaved ham, tomato, smoked cheddar and garlic aioli on a english muffin. They also do a veg version.

Hamers Coffee serves more than a curated selection of coffees and teas. They also have a sando menu featuring items like their Classic Western with prosciutto, manchego omelette, romesco and aioli.

Kettleman's Bagels has brought their Montreal-style bagels to Toronto. They offer an array of sandwich options on their menu all making the perfect start to any day.

It's not just epic shakshuka on the menu at Cafe Landwer. They also offer a number of grilled sandwich options on their brunch menu including the Jerusalem with mozzarella, hard boiled egg, matbucha and za’atar. 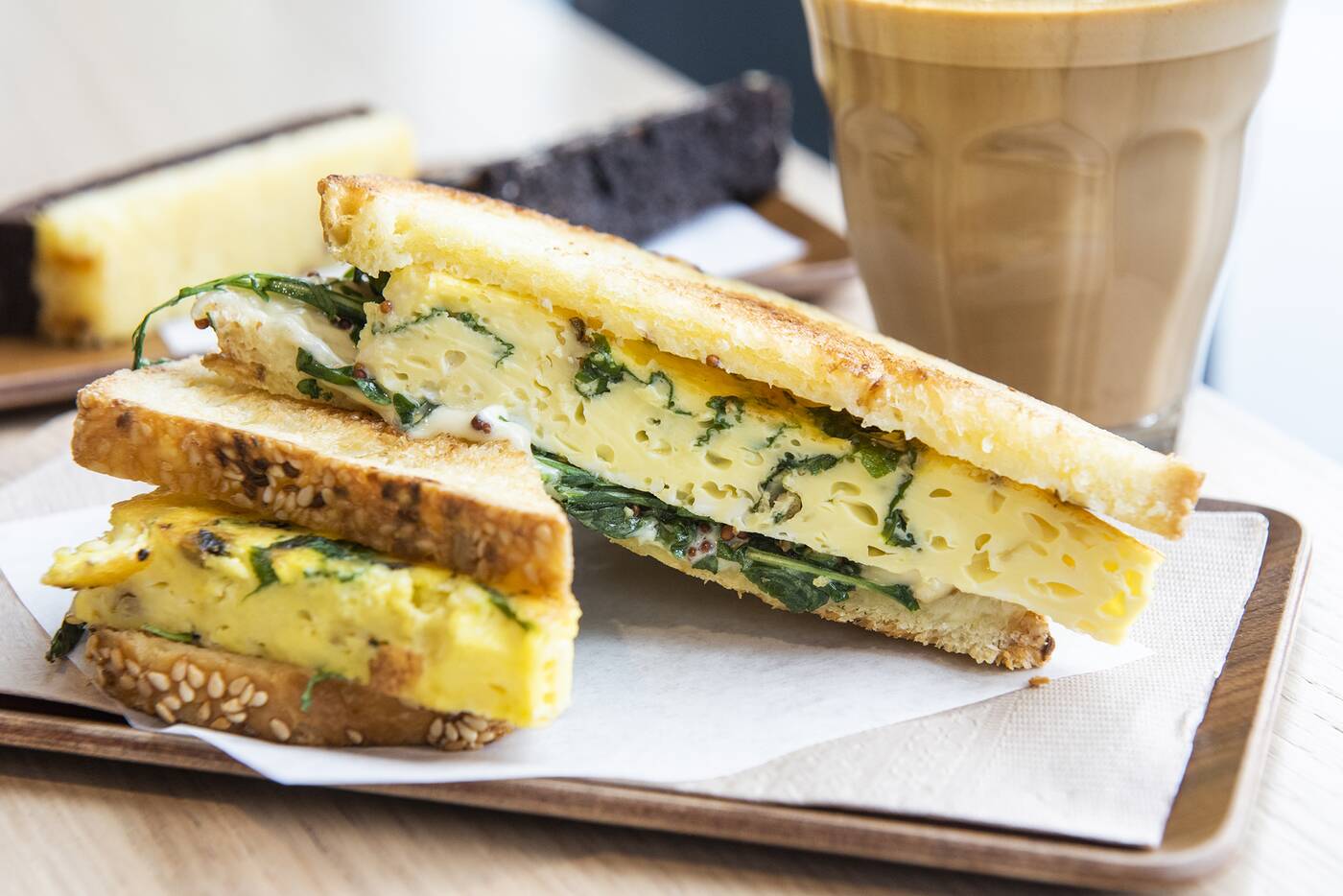 Can't wrong with a visit to Forno Cultura in the morning. Photo by Hector Vasquez.

Almond Butterly may be known for their gluten-free baked goods but don't pass up a chance to try one of their all-day breakfast bagels.

Dirty Food is where you'll find the mother load of breakfast sandwiches. Order up their Breakfast'wich featuring an andouille sausage patty, a fried egg, cheddar cheese, pickles and dirty mayo.

Popular Italian bakery and cafe Forno Cultura can be found inside Toronto's MOCA. Among their offerings you'll find a number of sandwiches including a brioche breakfast sandwich with cheese, arugula, and a fluffy piece of egg.

The speciality at Turkish bakery and cafe Simit & Chai is the bagels. While you can order them on their own opt to get them made into a sandwich. 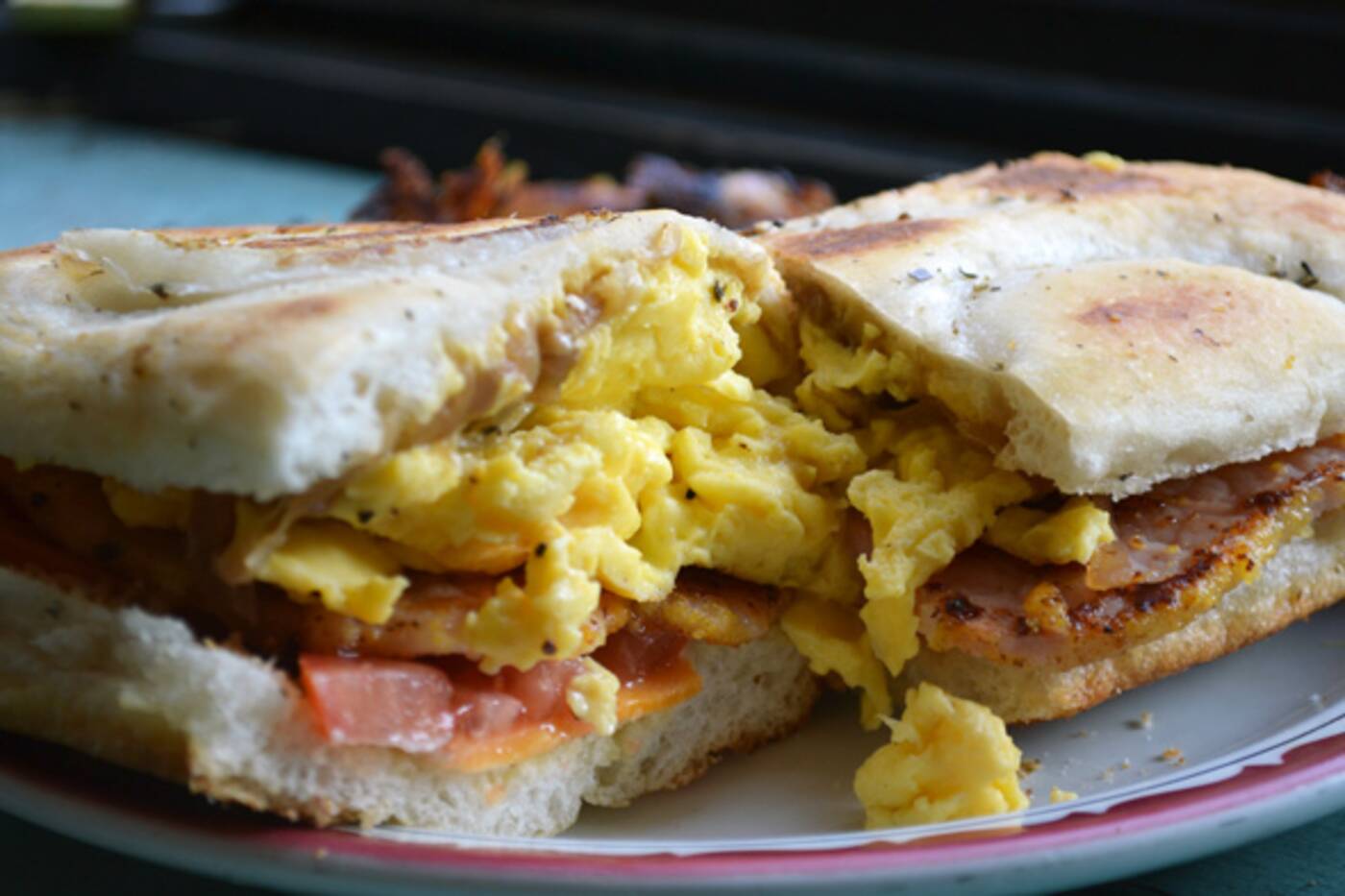 The breakfast pocket is a Auntie and Uncles staples. Photo by blogTO.

Egg, aged cheddar, spiced ketchup and microgreens all on a bun is the basic version of the Fruitful Market breakfast sandwich, although optional add-ons include, gluten-free bread, peameal bacon, avocado, tomato or even an extra egg.

The Veda is one item that should not be missed at Mildred's Temple Kitchen. Salmon, bacon or avocado are put on a flakey croissant with soft poached eggs and bearnaise sauce.

At Lazy Daisy's Cafe get the egg 'n cheese sandwich on a homestyle biscuit with free-range eggs, cheddar and smoked bacon. Vegetarians can partake too with a version featuring egg, cheese, tomato and avocado.

A visit to Aunties and Uncles on Lippincott is not complete without sinking your teeth into one of their breakfast pockets. A soft egg bun gets filled with scrambled eggs, peameal bacon, cheddar cheese, tomato and carmalized onions.

Breakfast sandwiches stuffed with sweet shrimp and bulgogi are the specialities at Wonder Egg. 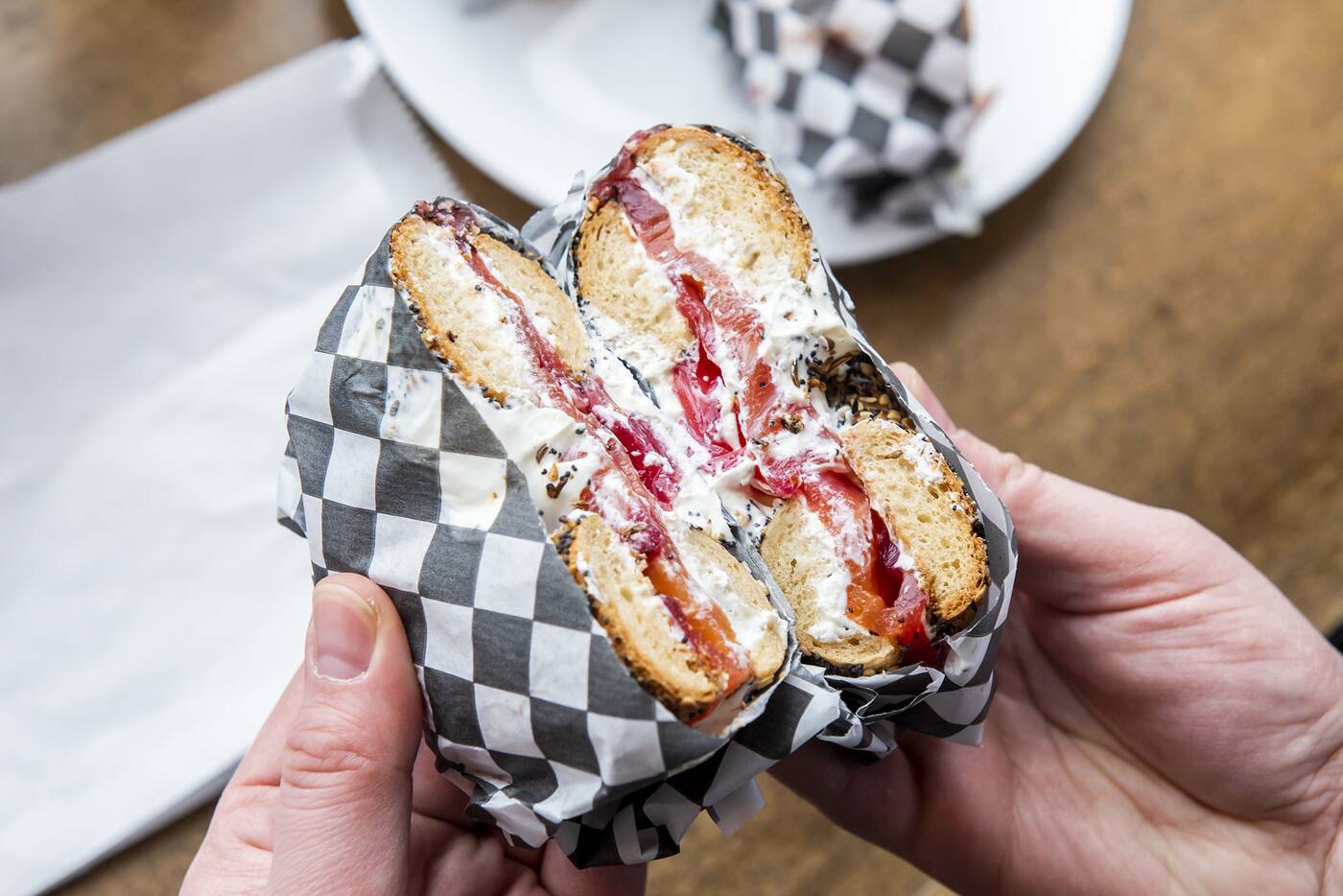 The sandwiches at Primrose Bagel are a must-try. Photo by Hector Vasquez.

Goat Coffee Co. is where you'll find a number of tasty breakfast items but the must-try is the French toast sandwich dubbed the Ooh La La.

You’ll find a classic French omelette with gruyere cheese, aged cheddar and mozzarella along with heirloom tomatoes and house-made aioli between the scratch-made English muffins used to make the breakfast sandwiches at The Tempered Room.

Avenue Open Kitchen is a tiny diner serving up all the breakfast staples, including a classic peameal sandwich with lettuce and tomato.

Riverside Burgers may be known for their tasty burgers but between the hours of 8 a.m. to 11 a.m. you'll be able to sink your teeth into some jampacked breakfast sammys. 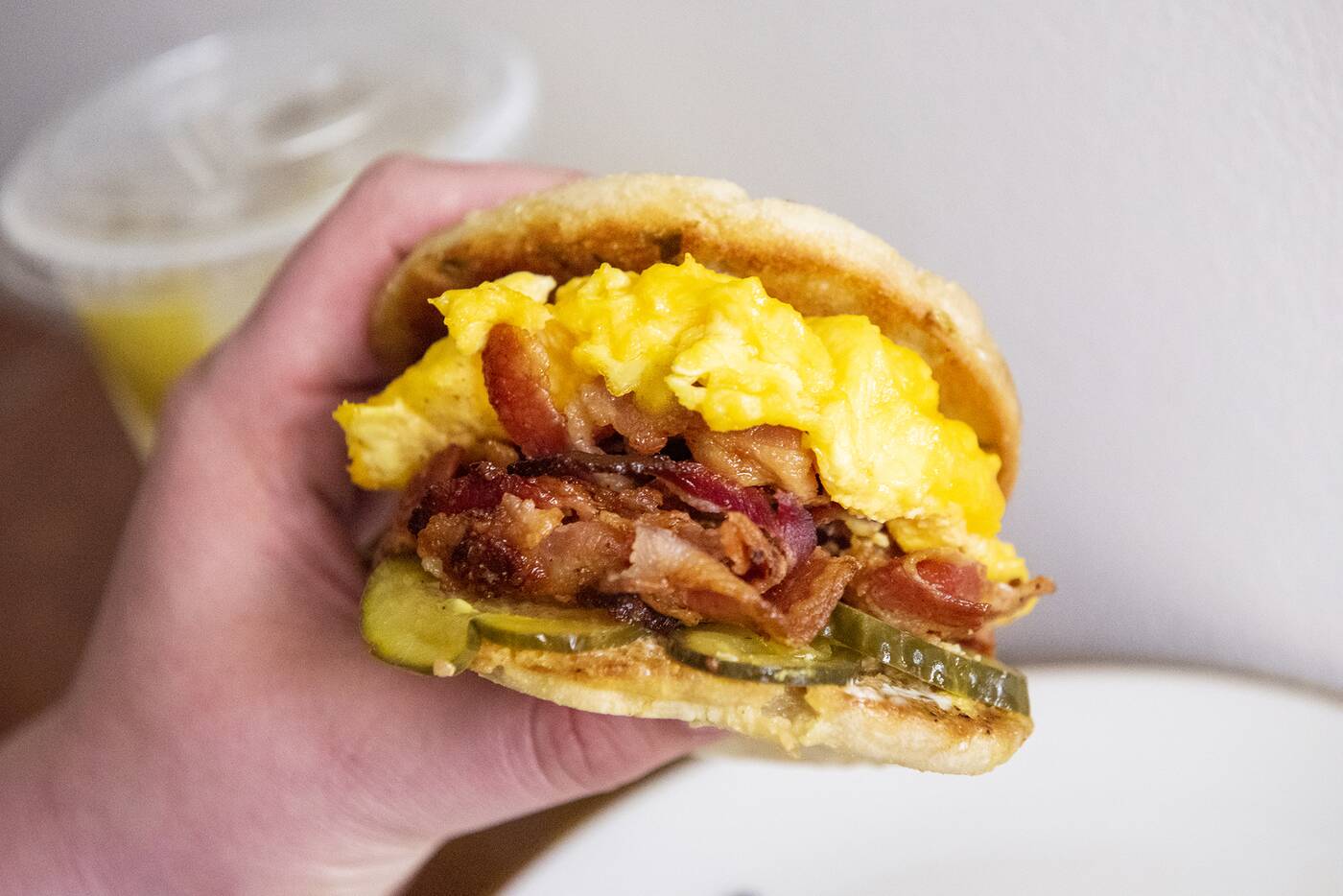 Gold Standard sells delectable breakfast sandwiches on toasted English muffins out of Reunion Island from a side window on Neepawa.

Black Camel isn't just a source for delicious pulled pork and brisket sandwiches. In the morning they serve their eggspresso sandwich until 11 a.m. The eggs are cooked using their espresso machine.

Found at St. Clair and Victoria Park, Gingerman Restaurant is a hidden gem where popular picks include greasy spoon staples like BLTs and Western sandwiches on a choice of toast.

The Sovereign on Davenport is where you'll find some of the best breakfast sandwiches in Toronto. The cafe does egg sandwiches on English muffins with gruyere and spinach or bacon and cheddar.

The OG of breakfast sandwiches in Hogtown can be found at Carousel Bakery. The peameal bacon here is thick and comes loaded on a country bun with optional cheese or fried eggs. 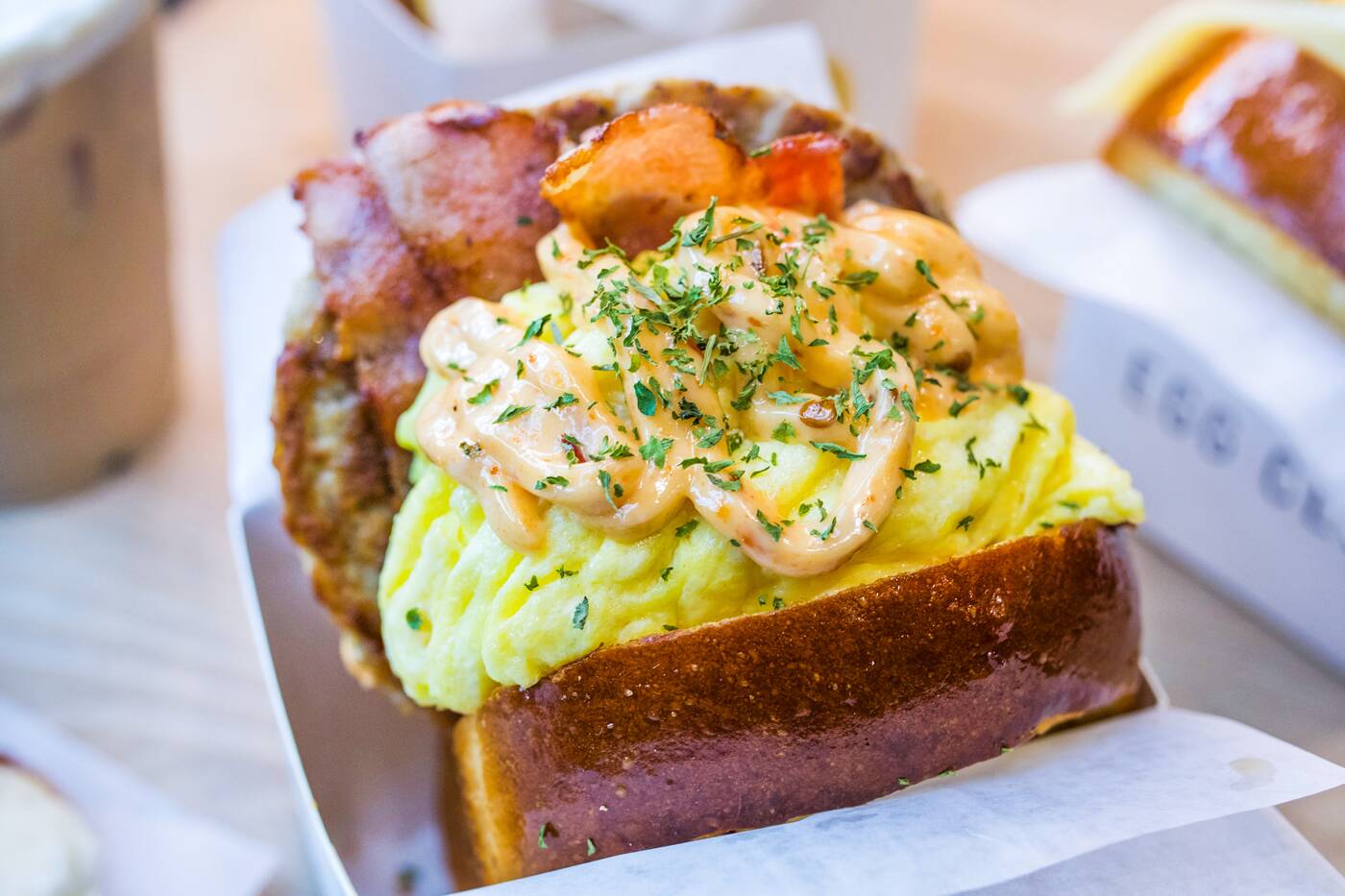 A visit to Yonge-Dundas Square is now complete without an Egg Club sandwich. Photo by Fareen Karim.

Local breakfast chain BOOM Breakfast & Co. is where you'll get tasty breakfast offerings on Eglinton. They have a number of sandwiches on their menu including the Downtown featuring scrambled eggs with guacamole and tomato on a brioche bun.

Kiva's Bagel Bar is a go-to for a.m. standards of bagels with giant scoops of cream cheese and lox. If that's not your cup of tea there's also a variety of egg-based options.

Hector Vasquez at Egg Bae. With files from Liora Ipsum and Jaclyn Skrobacky.