The top 30 Thai restaurants in Toronto by neighbourhood

Thai restaurants in Toronto can be found in many neighbourhoods. Favourites like pad thai and spring rolls are the comfort foods of every metropolitan citizen, and nothing feels more like home than a good Thai food go-to.

Here are my picks for the top Thai restaurants in Toronto by neighbourhood.

Mugi is a low-key takeout spot on Bathurst specializing in vegan Thai dishes. Chow down on bowls of curries, noodles, and rice. Nearly everything here is made from scratch.

The Thai Room has six Toronto locations including this one on Bloor. The local chain serves up the usual Thai classics including red curry chicken, mango salad and pad thai.

Carlton Street restaurant Maya Bay comes to us from the same person behind Koh Lipe, and similarly serves Thai cuisine not found at other restaurants like chicken feet soup and Thai-style beef tartare. 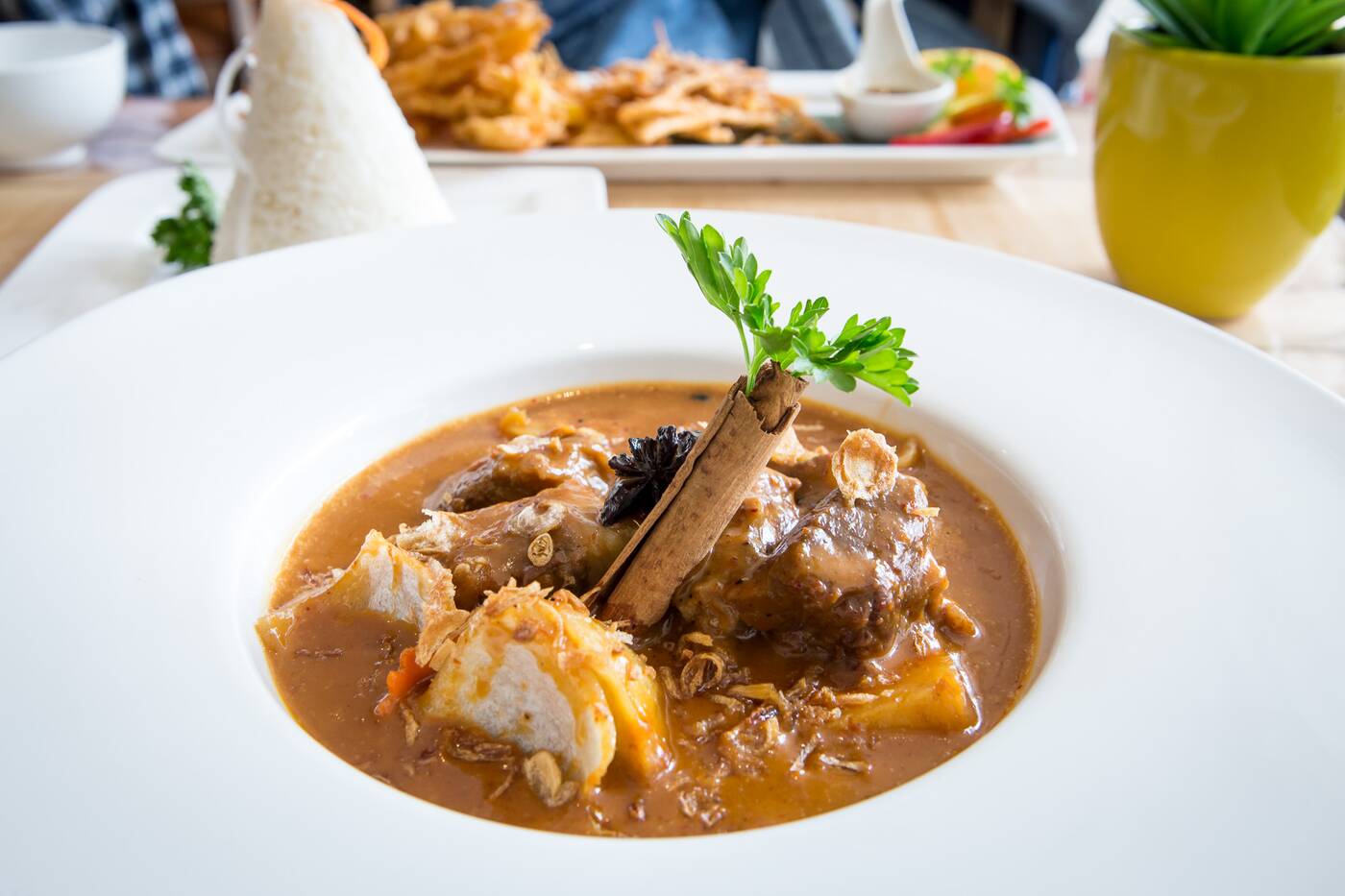 The dishes at Sala Modern Thai are almost too pretty to eat. Photo by Jesse Milns.

Si Lom is definitely the spot for Thai food lovers who also love their booze. Standout dishes include specialties like the softshell crab Pad Thai, but the real star of the show is the menu of boozy buckets.

Sala Modern Thai may look humble, but the food it serves is definitely something that the chefs can brag about. Egg-wrapped pad thai noodles and tasty curry beef are presented beautifully and taste just as good as they look.

Over the years Sukhothai has expanded across the downtown core. Now, the family-run brand has three locations in the city and boasts some of the best pad thai in the city.

Khao San Road found on Charlotte Street is home to some of best Thai in Toronto. Stand-out menu items that cannot be missed include green curry, pad see ew and khao soi. 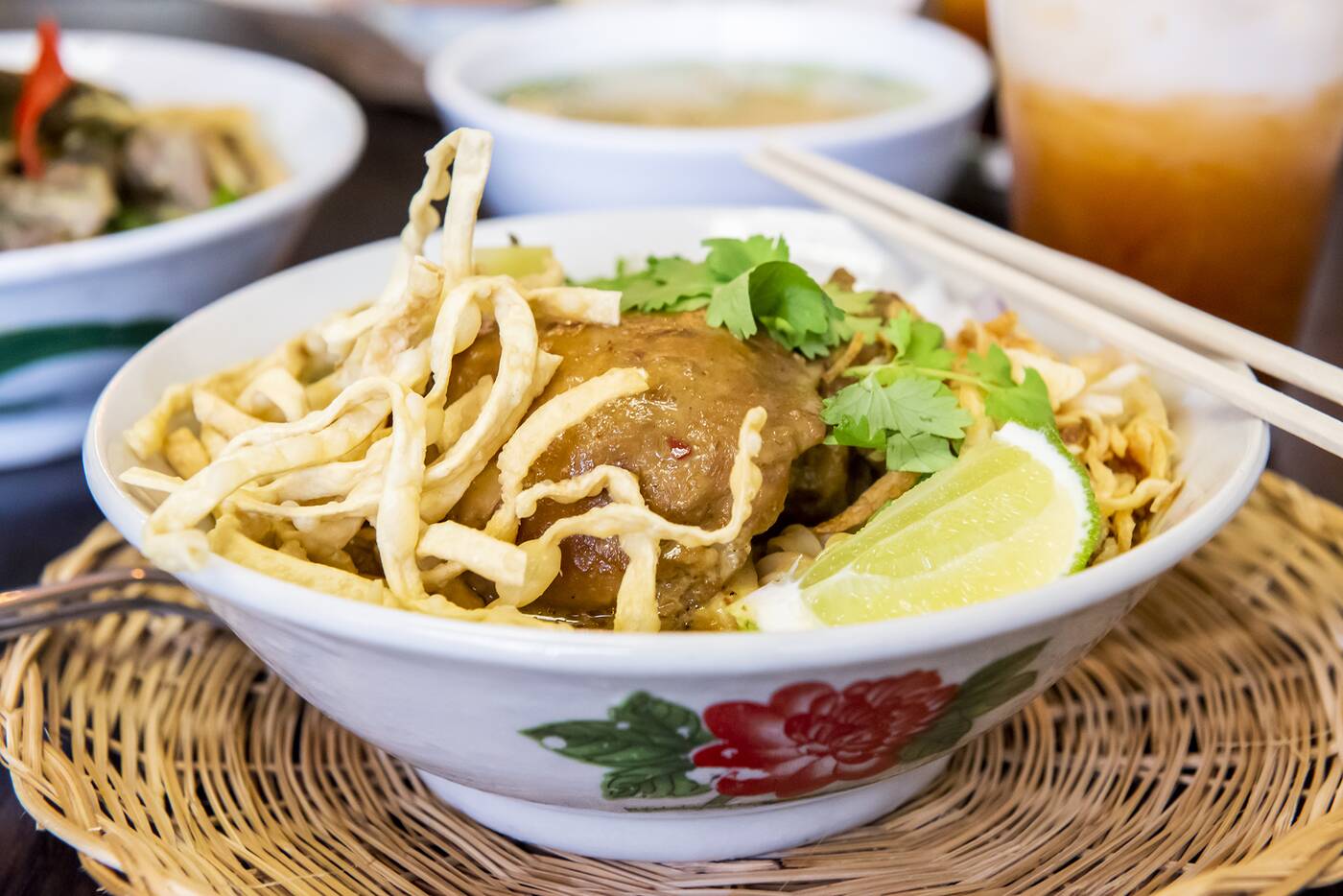 Khao soi is always on the menu at Thai Nyyom. Photo by Hector Vasquez.

Nimman Thai Cuisine can be found in a small strip mall in Mimico. The restaurant is where to chow down on authentic Thai food on Lake Shore.

Isaan Der takes its name from the region of Thailand its recipes are from — Isaan is the northeastern area bordering Laos and Cambodia. Presentation is key here: shrimp rolls are tied with noodle bows and ping gai chicken is served in charming street-style.

Bloor restaurant Thai Nyyom sets itself apart from other restaurants by only serving two items a day plus one special. Expect to find chicken rice and khao soi always available and check out their Instagram daily for their special.

Mengrai Thai has been open since 2007, hidden on Ontario Street in the former Regal Brewery. This place does pad thai two ways with both options not disappointing.

Coco Rice is one of the very few Thai restaurants in this area. On the menu order up some of their most popular dishes like Royal Pad Thai with tamarind sauce and vegan red curry with rice. 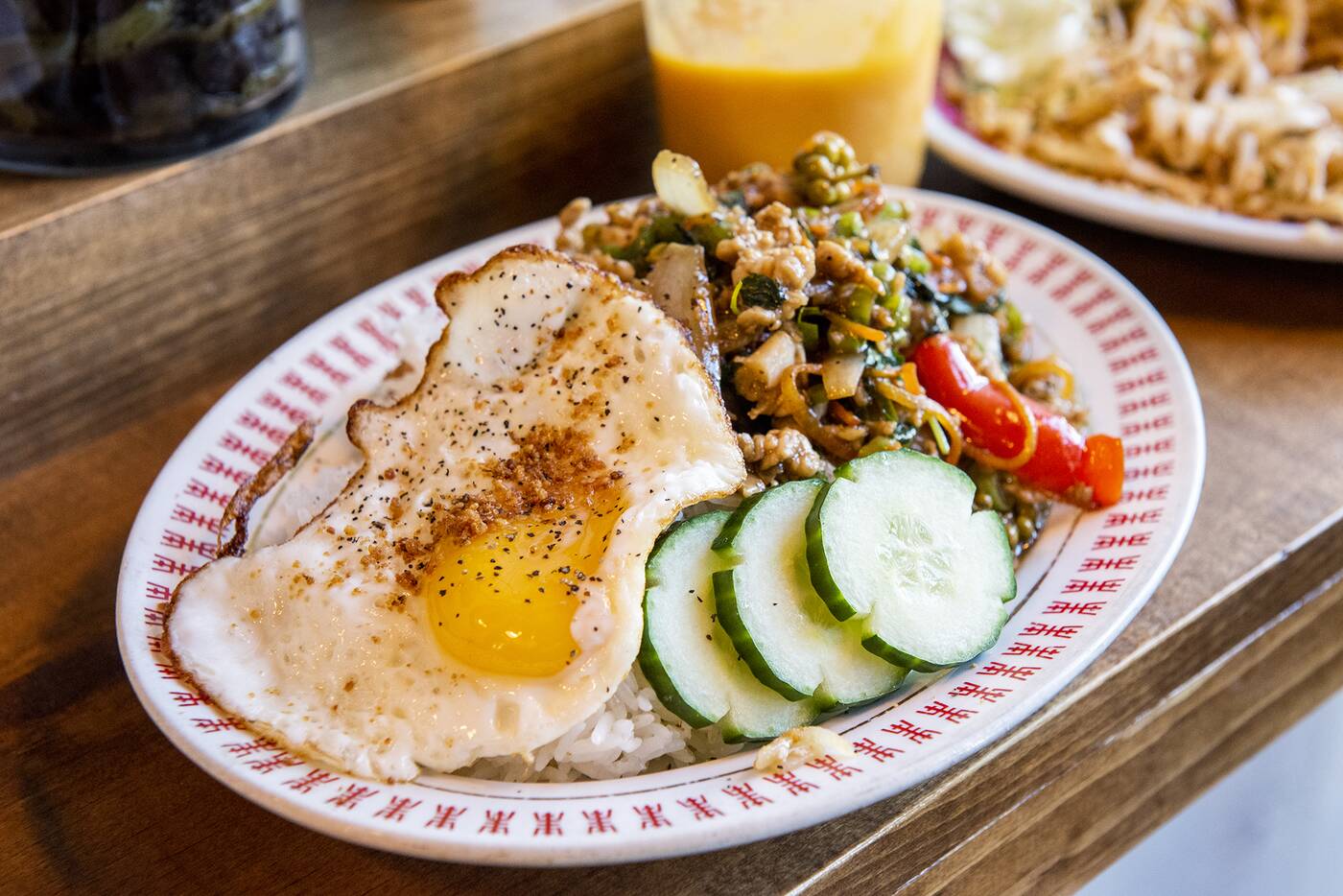 For unique takes on traditional Thai, head to Eat BKK to sample some khao soi poutine (fries with beef and coconut curry) and spaghetti curry.

For good service and atmosphere, Bolan Thai Cuisine's charming restaurant makes for an ideal low-key night out. Curry is served alongside adorable star-shaped mounds of rice and appetizers like crispy deep-fried snow shrimp.

Phat Kaphrao is named for their signature dish, a Bangkok street food stir fry made with holy basil and topped with a fried egg. The rest of the menu also sticks to a traditional style of Bangkok street food, curries and sauces made from scratch in house. 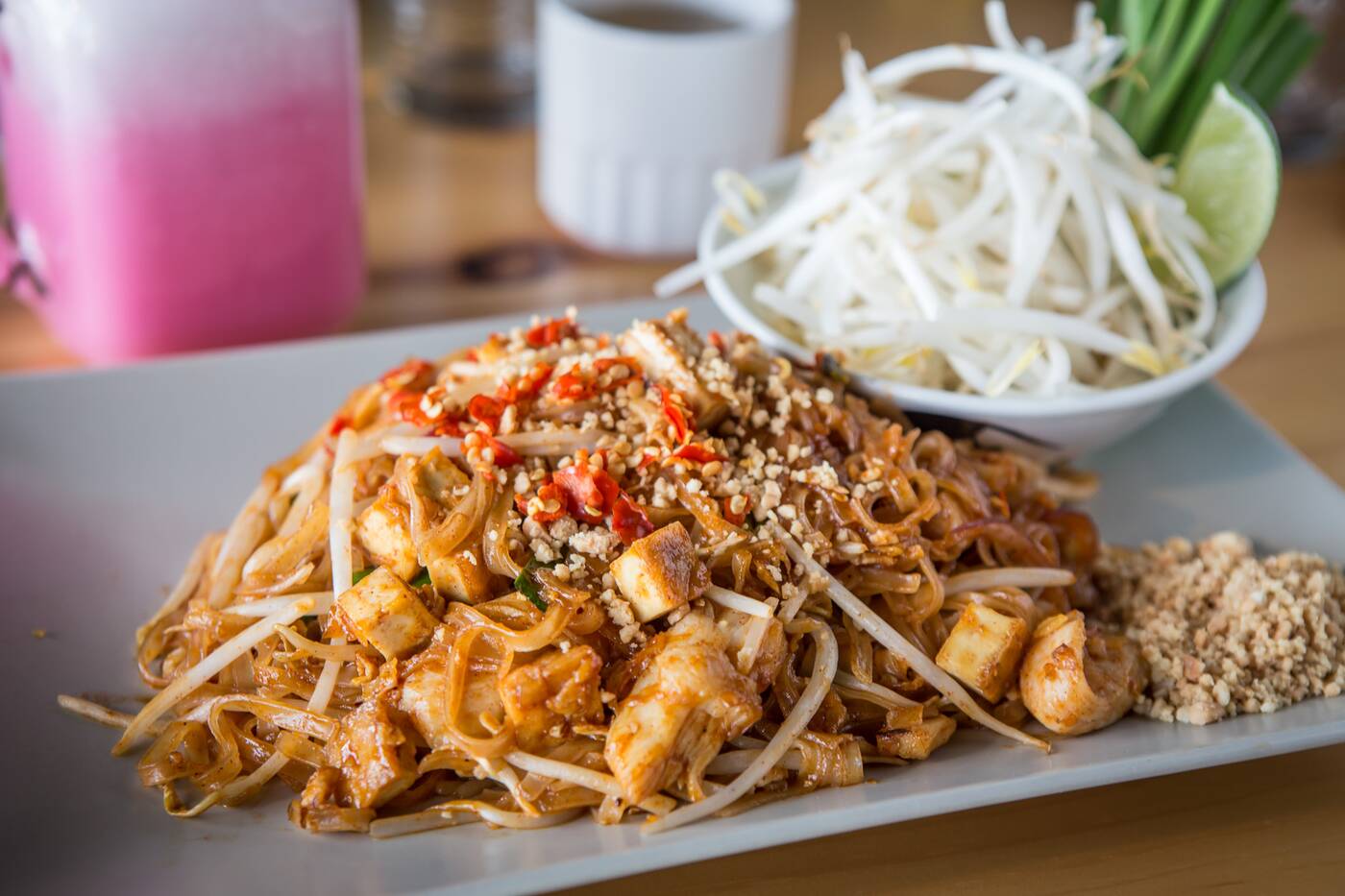 A visit to Jatujak never disappoints. Photo by Jesse Milns.

Favorites is a collaborative effort between the people behind Khao San Road as well as Paris Paris and Superpoint. It's all about Thai BBQ here with grills fueled by binchotan charcoal.

Popular student haunt Salad King also has a home on Queen. Just like their other location prices here are decent and it's perfect option for a quick lunch or dinner.

Ultra-casual Thai Home does quick and cheap Thai eats along with daily specials.

Real Thai food lovers should familiarize themselves with Jatujak, a staple eatery in Scarborough that many will vouch for as the best purveyor of pad thai in the city. Their location on Kingston Road is mostly takeout, but this Vic Park spot is worth travelling for. 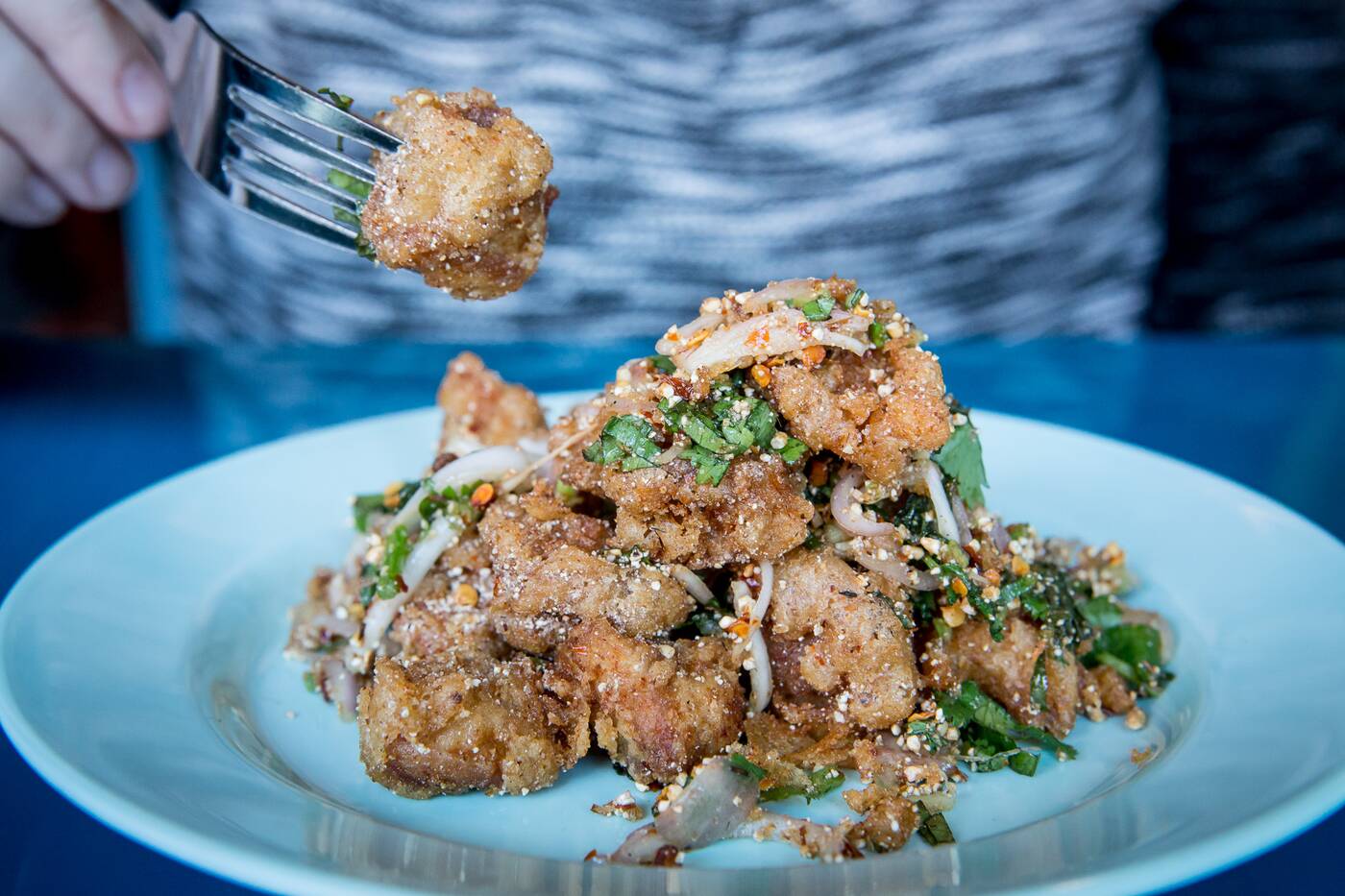 The lovely subterraneous space that is Sabai Sabai boasts a refined menu of Northern Thai and Laotian favourites. Pair it with a bottle of Beerlao, a sweet jasmine rice beer, to offset the spice.

Bangkok Garden has been a fixture on Elm Street for more than 25 years. On the menu find your standard noodles and curries along with some fusion dishes like burgers.

One of the most popular dinner destinations in the city, you can't really go wrong with a meal from Pai. There'll probably be wait to dine at the restaurant, but it's well worth it.

People who live by Joy Thai swear by it as the best local Thai spot in the area. The chicken pad thai here is surprisingly good, and they have a great selection of soups like tom kha and tom yum.

Hector Vasquez at Koh Lipe. With files from Tanya Mok and Jaclyn Skrobacky.