Thai Nyyom takes its name from the word for popular in Thai. It's apt, seeing as this space was home to Italian hot table joint Nonna's Place that inspired lunchtime lineups for half a century.

The family that runs Thai Nyyom has replaced it with one of the few cuisines that rivals Italian in popularity. The twist? They only serve two items a day plus one special, all for the same flat price of $11.50. 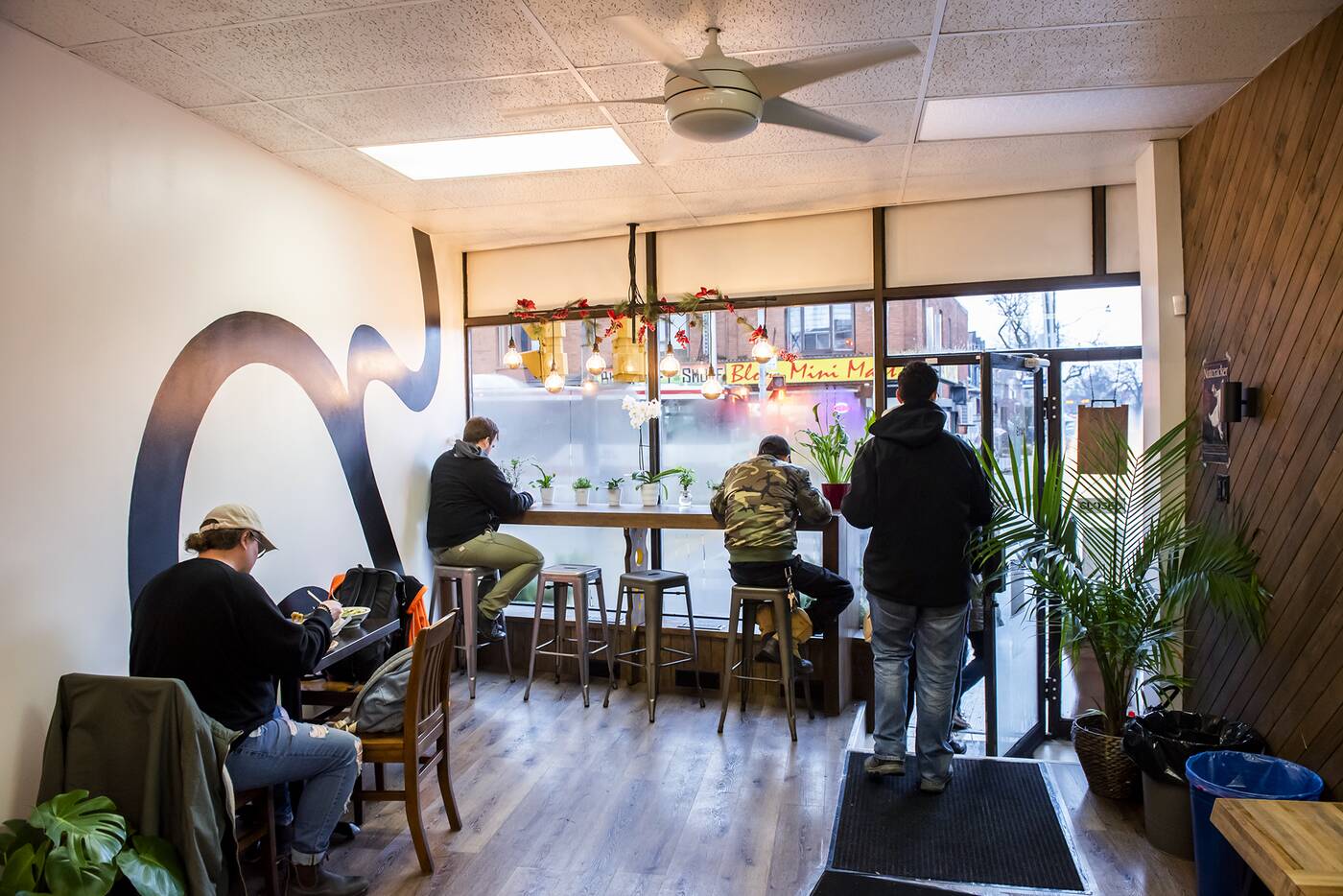 The interior still has the same basic angular charm of Nonna's, along with its quirky/annoying lip that forces a step up at the entrance. 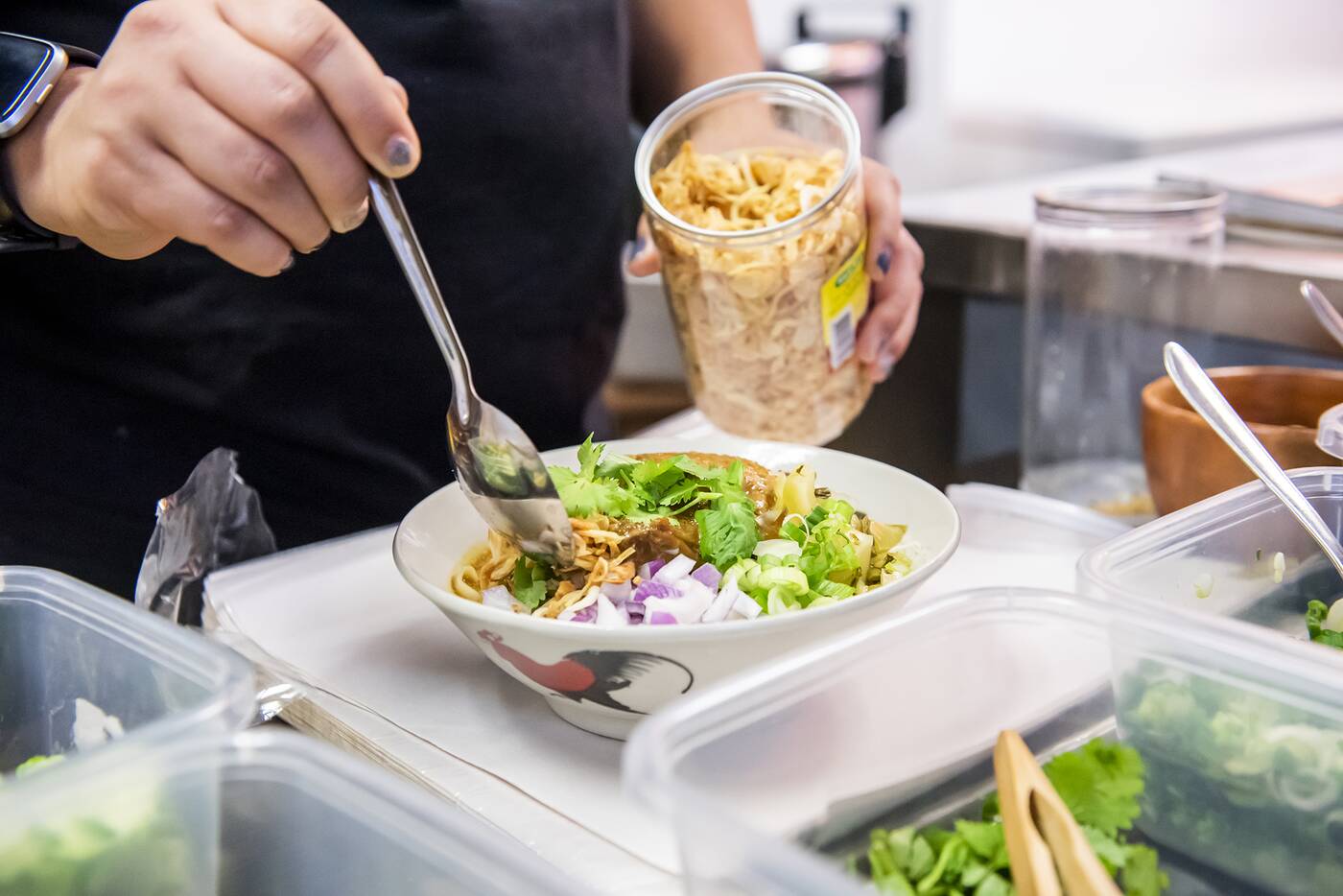 They're able to serve their two items quickly because they're actually ready in the hot table the way items at Nonna's used to be, the special prepared in the back where sandwiches were once made. 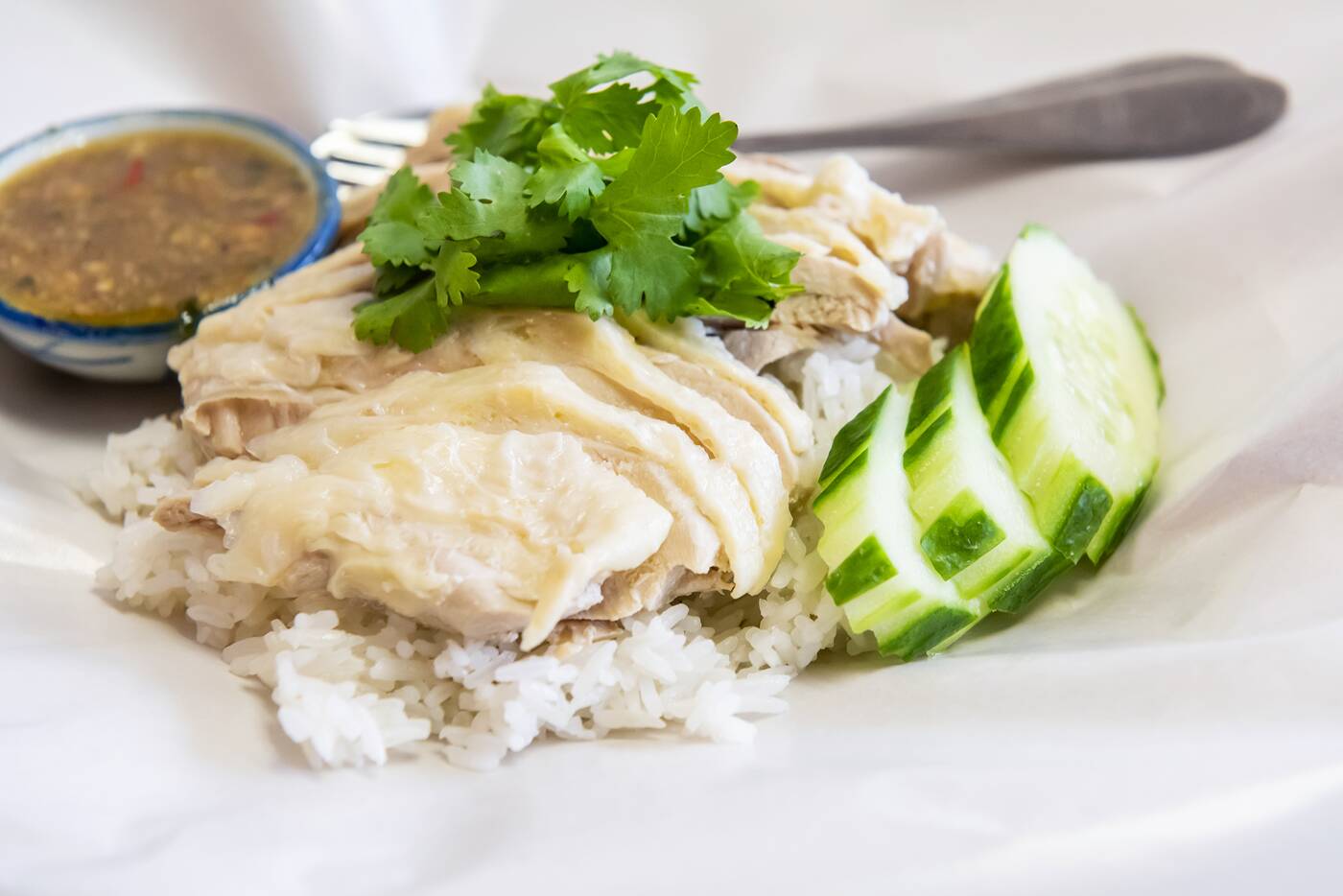 Chicken rice, also known as khao man kai, is basically a Thai version of Hainanese chicken rice. It looks simple, but its component parts coming together are what makes it special and satisfying. 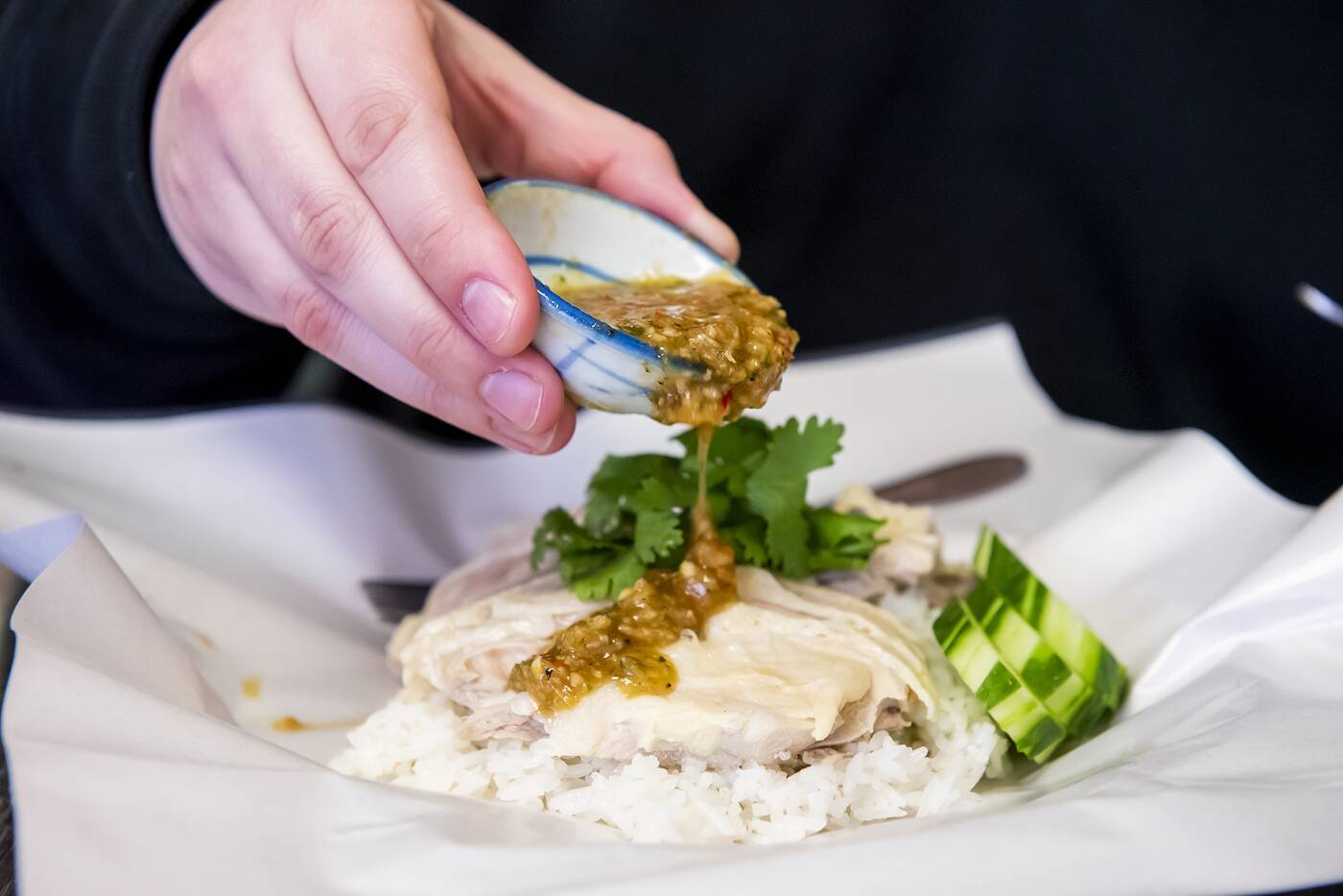 Poached, sliced chicken thigh is served with the chewy skin on over rice with chicken fat added to it, accompanied by fresh cucumber and, most importantly, a thick, tangy sauce of chili, garlic, ginger, cilantro, vinegar, dark soy sauce and whole soybeans.

Everything is served on basket placemats, and this dish is presented on special double-sided paper imported from Thailand typically used to serve street food. 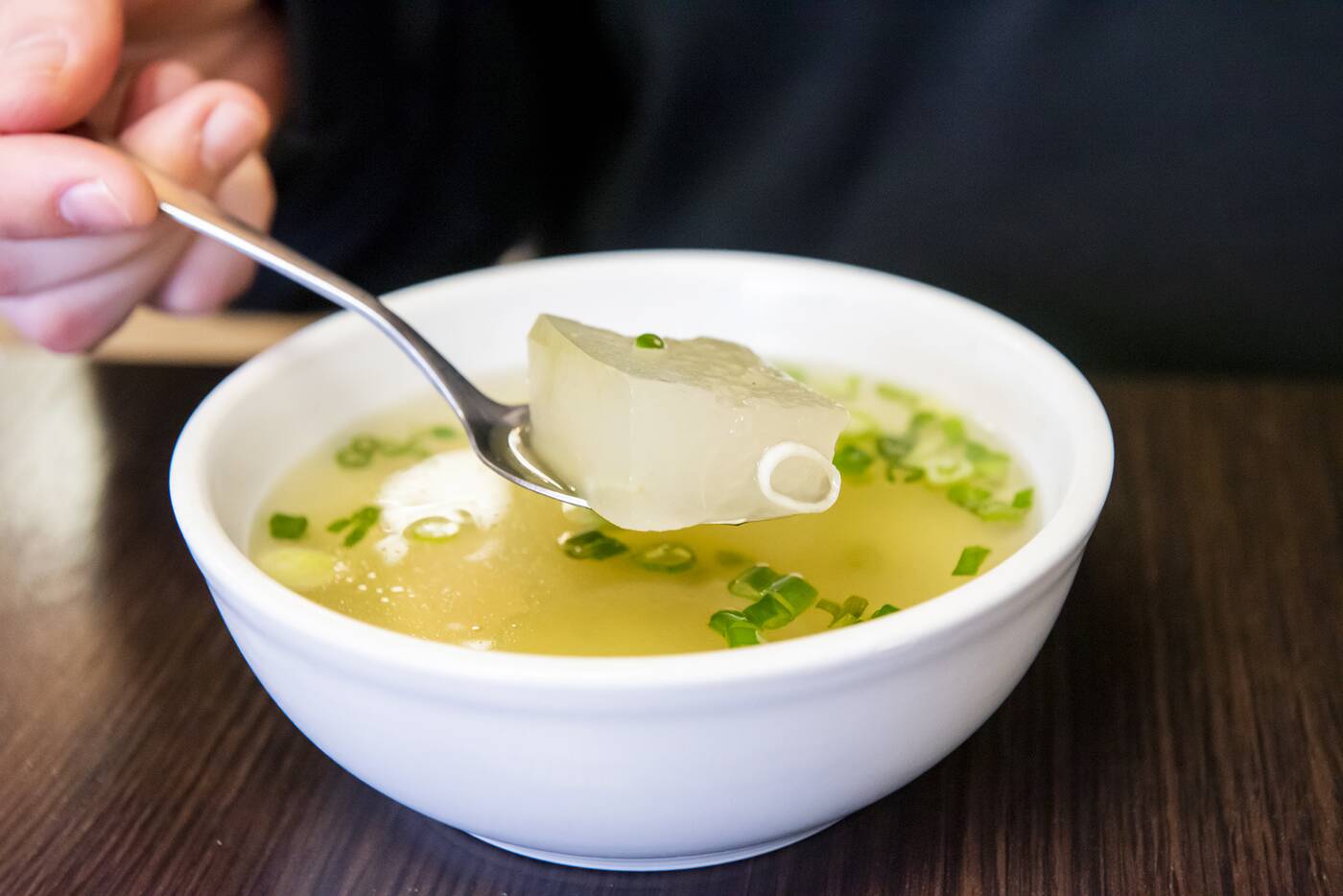 It's typically also accompanied by some sort of clear, very basic soup, today's being a winter melon with green onion. Sometimes it might be a traditional radish soup. The combination of schmaltzy poached chicken, flavourful sauce, and mild rice and soup is particularly comforting. 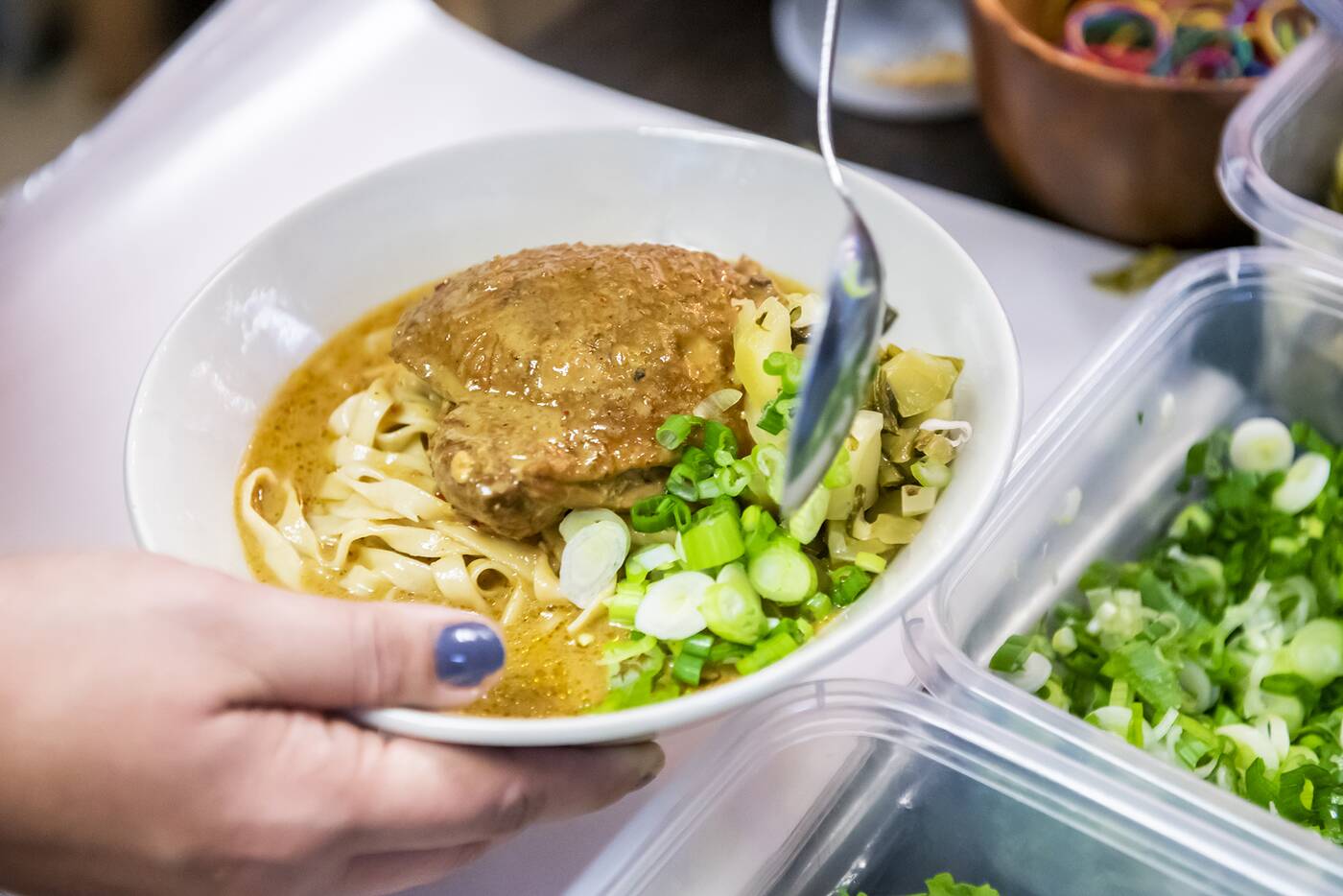 Khao soi is the only other thing on the menu. Bone-in chicken thigh is simmered in curry made using pastes made from scratch and plated over egg noodles, then topped with green onion, crispy egg noodles, red onion, fried onion, pickled mustard greens, cilantro and lime. 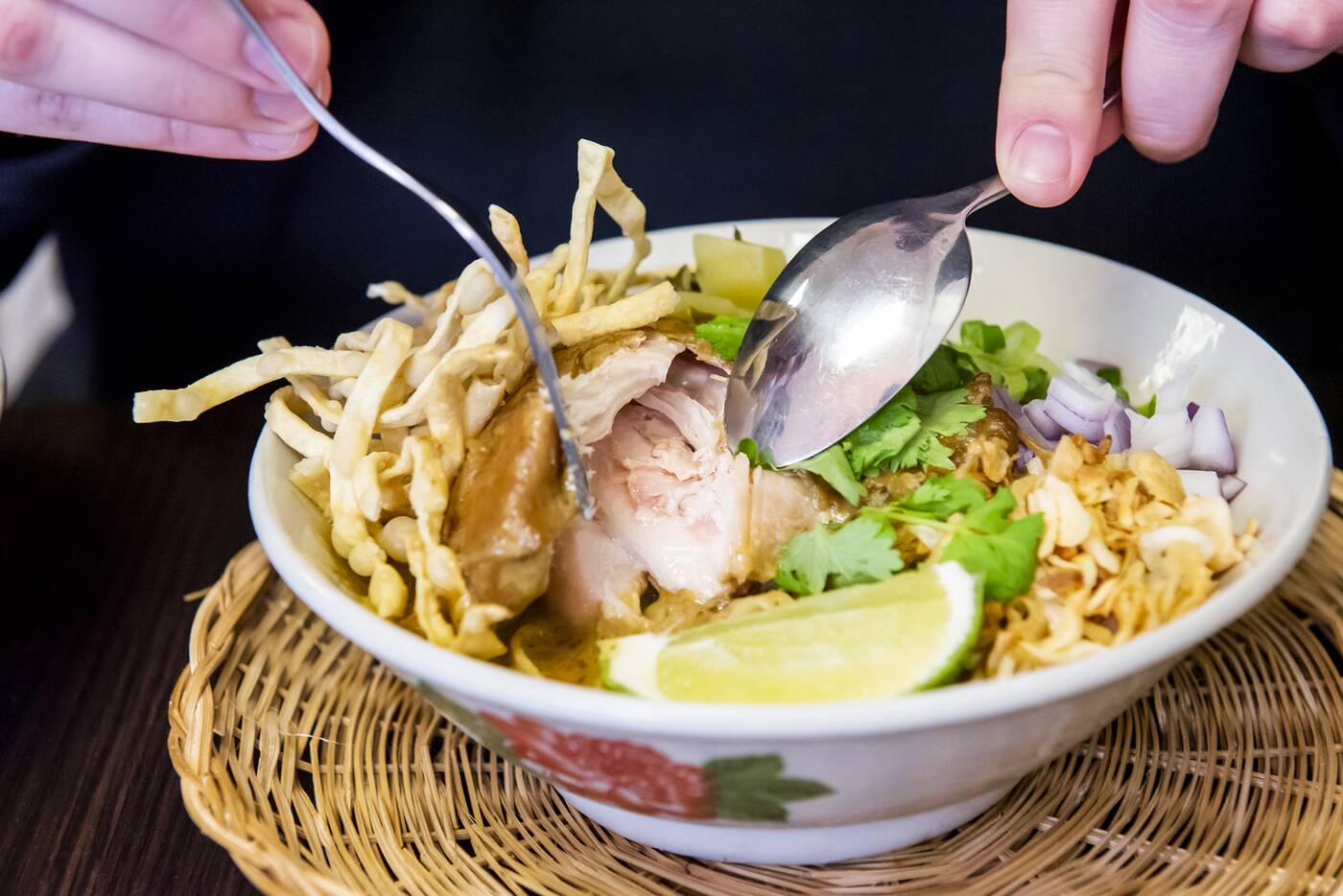 The chicken is tender enough to pull away with a fork and very juicy, the curry warmly spiced and soothing. 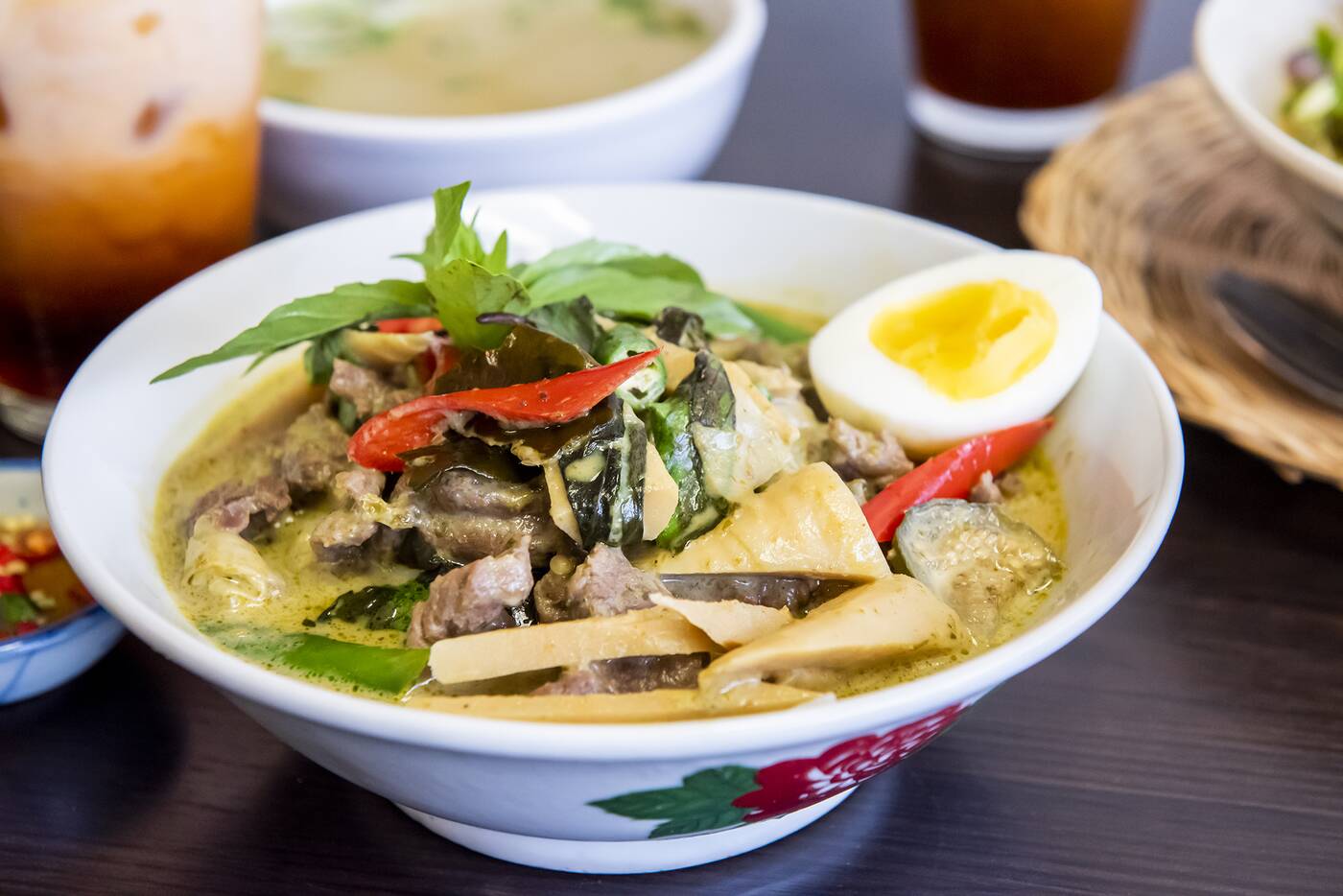 Green curry beef is the special when I'm in, plated over rice noodles instead of rice just to be a little bit different. 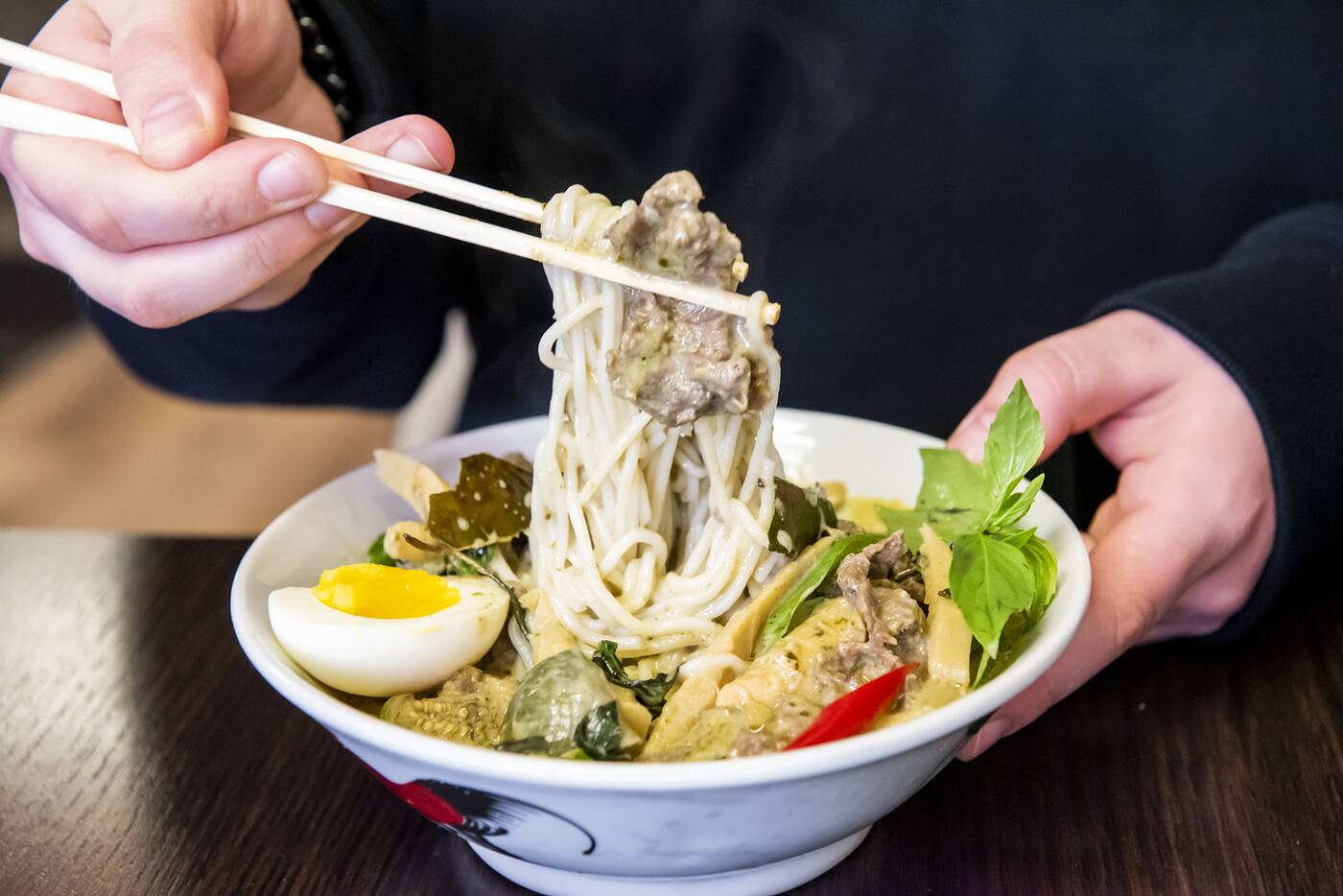 Aside from beef, the curry contains eggplant, Thai basil and chilli, and is topped with an egg to tone down the spice. Should you want to turn up the heat, however, a traditional fish sauce and chilli mixture is provided. 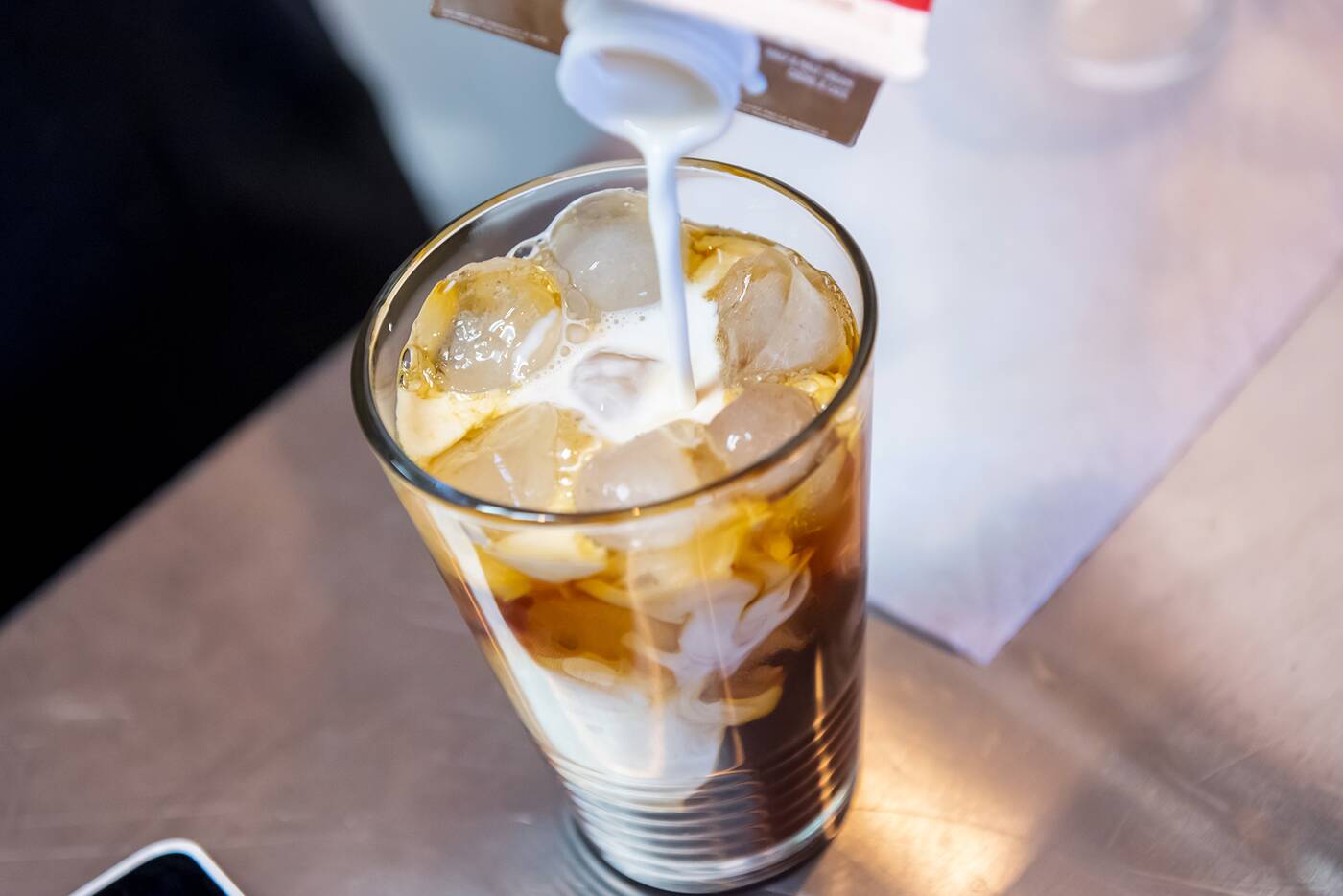 Thai iced tea ($3.50) is prepared from scratch here using tea leaves from Thailand and cream. It's the ultimate antidote for spice. 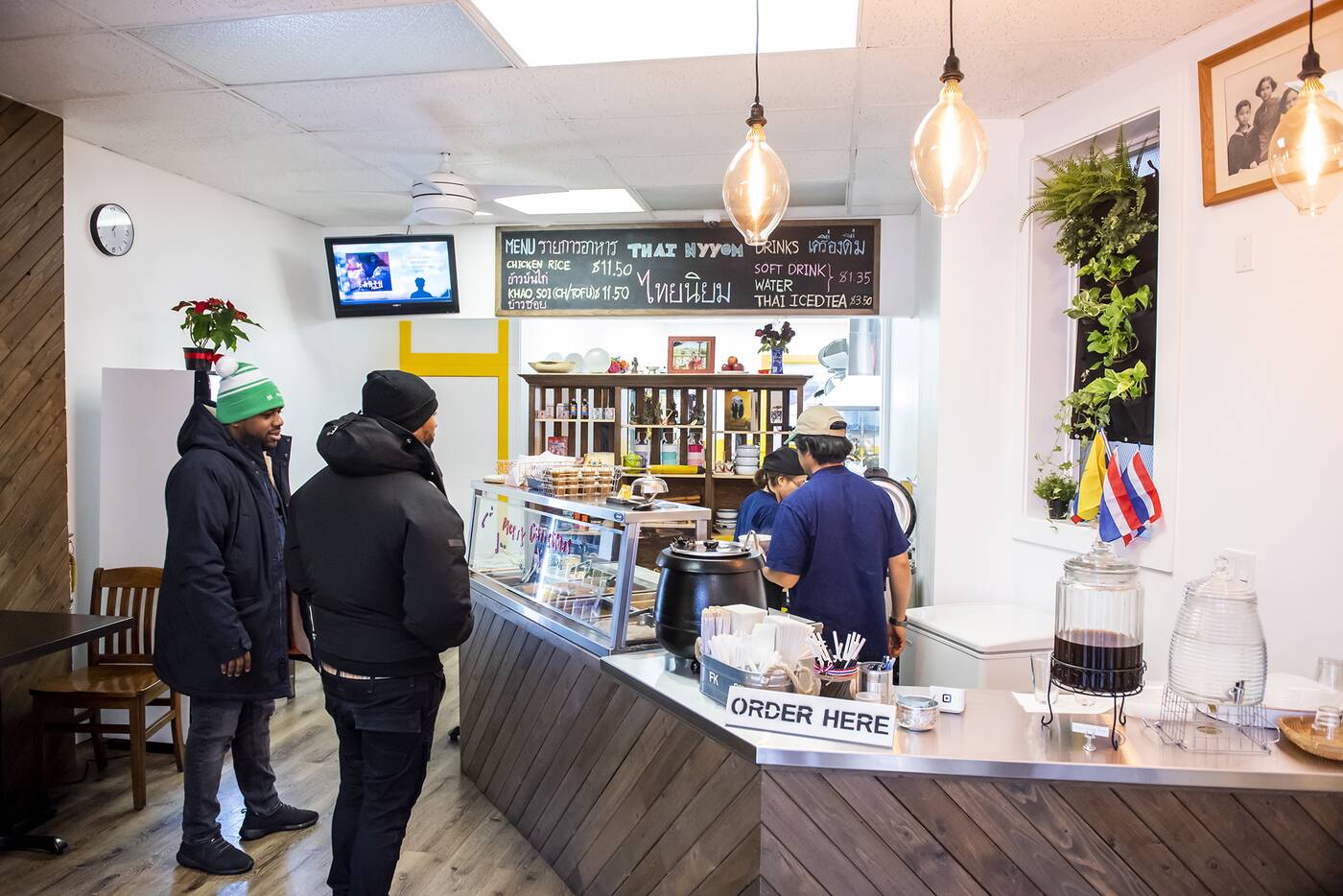 Thai Nyyom maintains you can get pad thai anywhere in Toronto, only offering it on Monday, Wednesday and Friday to appease customers. 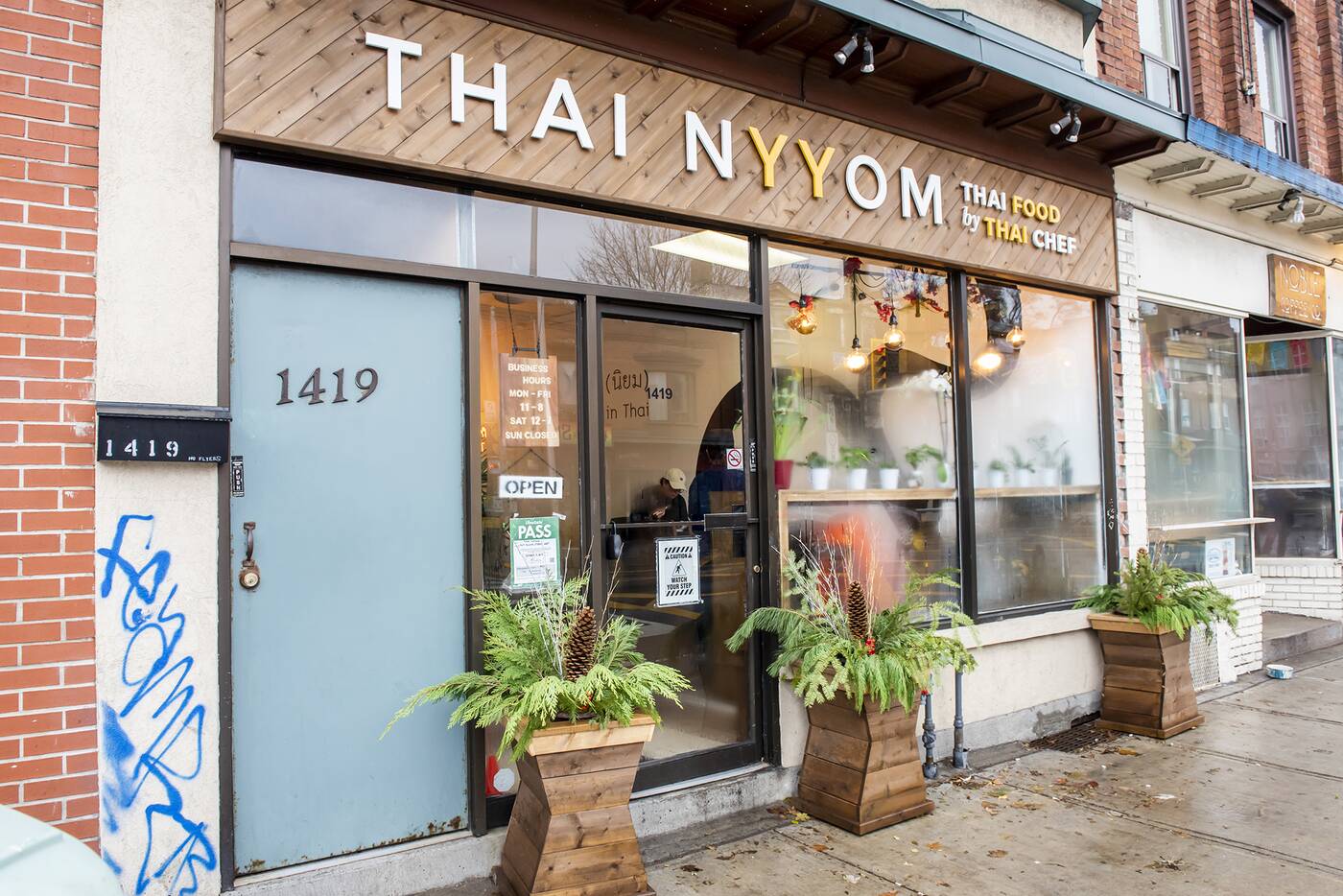