Isaan Der serves Thai cuisine like spicy salads, soups, noodles and curries from regions all over the country. However, it’s named for and specializes in traditional dishes from the North-Eastern region of Isaan which borders Laos and Cambodia near Vietnam.

According to owners and partners Donald and Chatsuda Drouin, “der” translates roughly to “eh” in our own Canadian dialect. Apparently the language spoken in Isaan is closer to that spoken in Laos, almost like Montreal French. 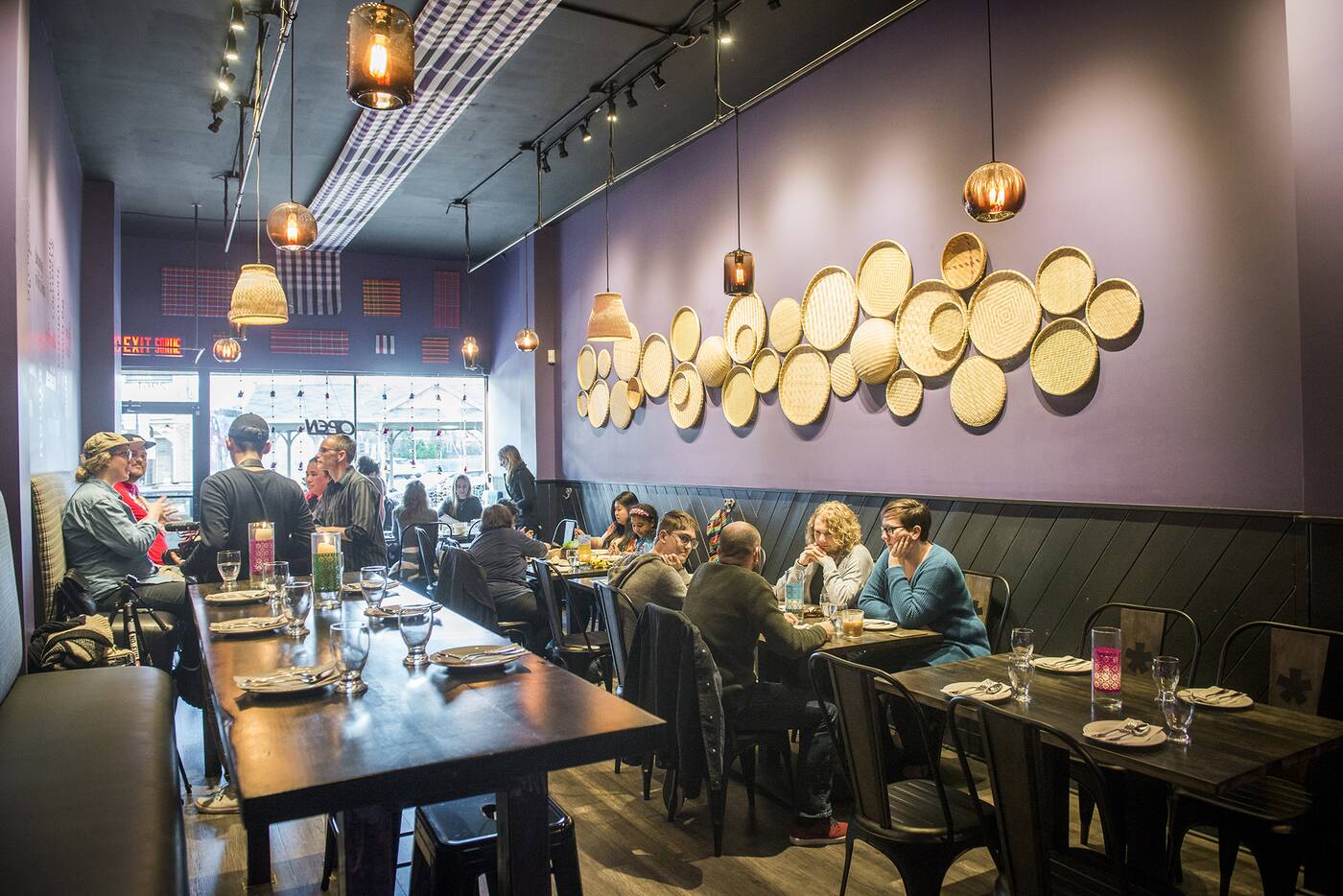 The purple walls are covered in words from the menu painted in gold by Chatsuda, as well as Thai steamer baskets arranged in a long pattern. Comfy banquettes are upholstered in traditional Thai textiles which also hang from the ceiling and walls. 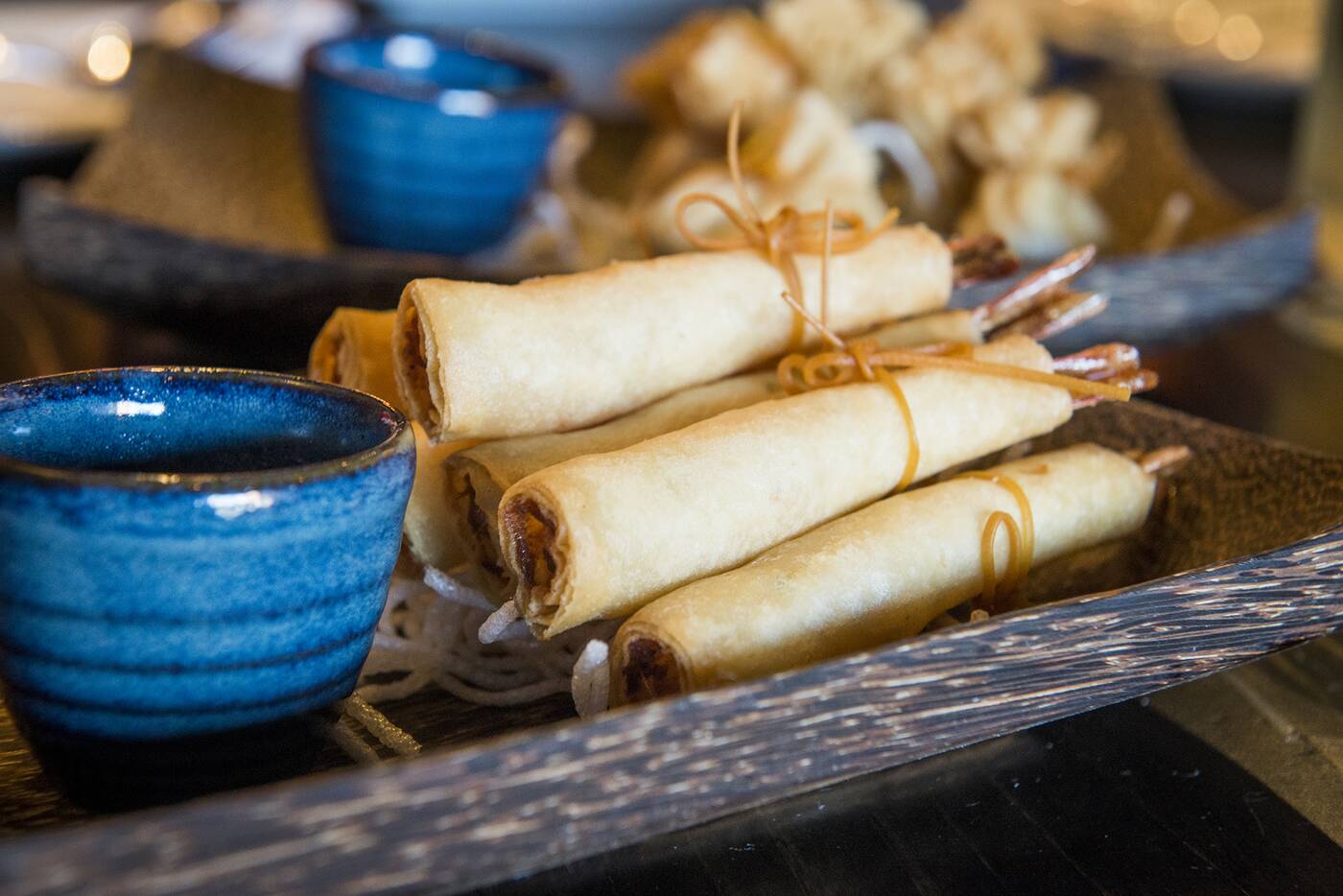 Noodle bows tied around shrimp rolls ($8) signify the mark of an educated chef. Deep-fried marinated shrimp are wrapped in pastry and served with a spicy sauce. 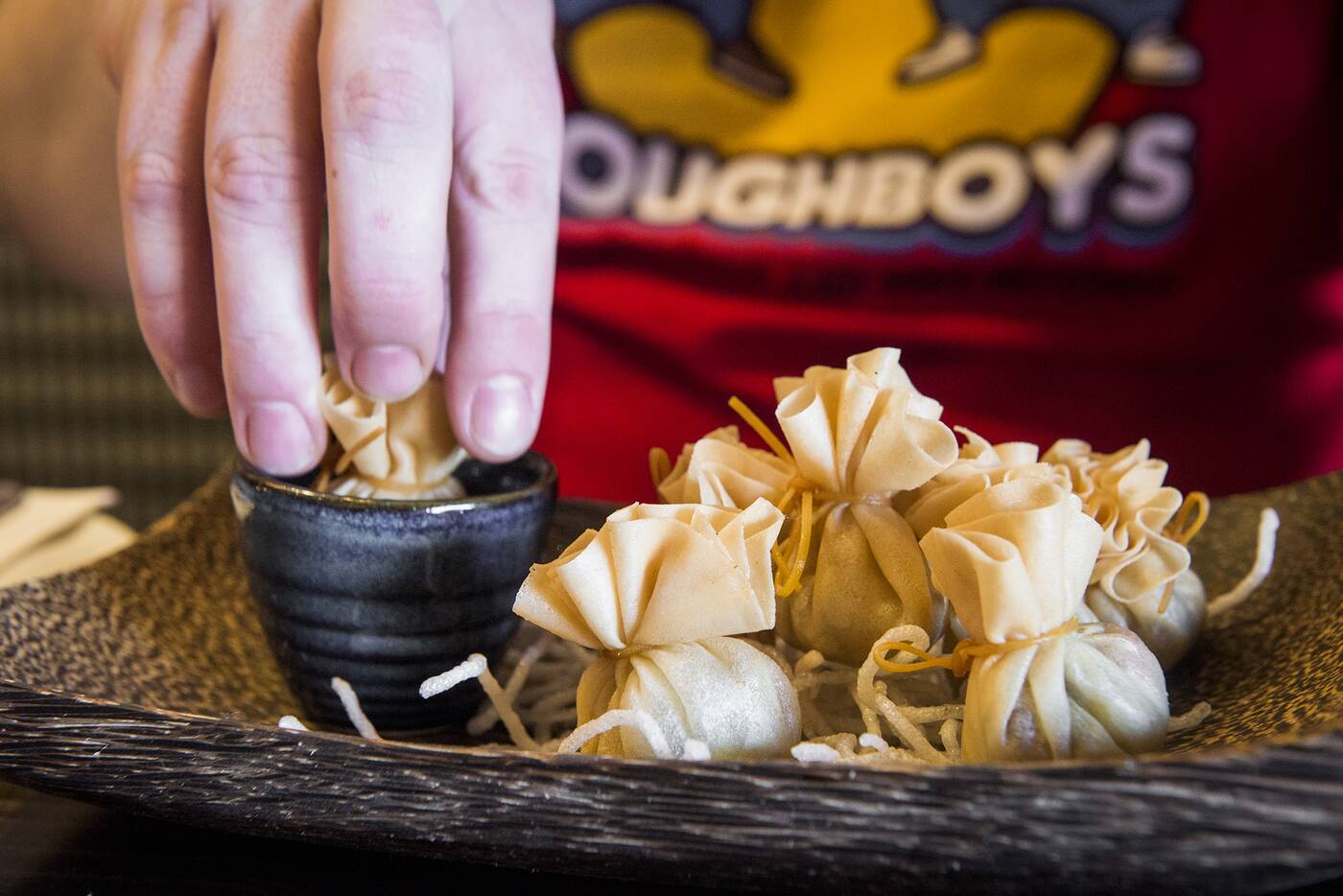 Golden bags ($8) are stuffed with water chestnuts, carrots and mushrooms and served with chili sauce, making for a beautiful and light appetizer with powerful flavour. 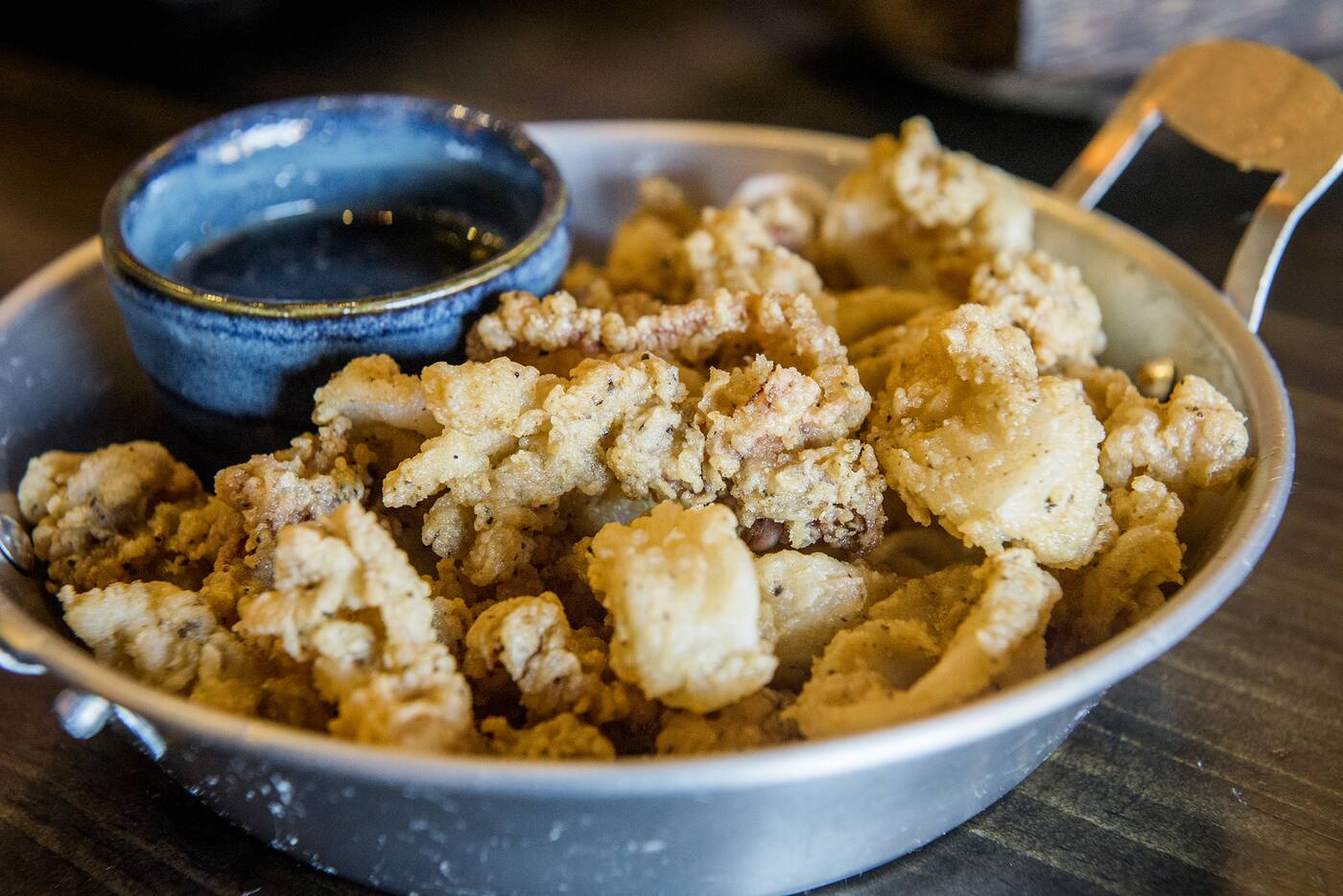 Calamari ($8) is fairly typical but crunchy, coated in a blend of spices and flour that picks up the tangy dipping sauce well. 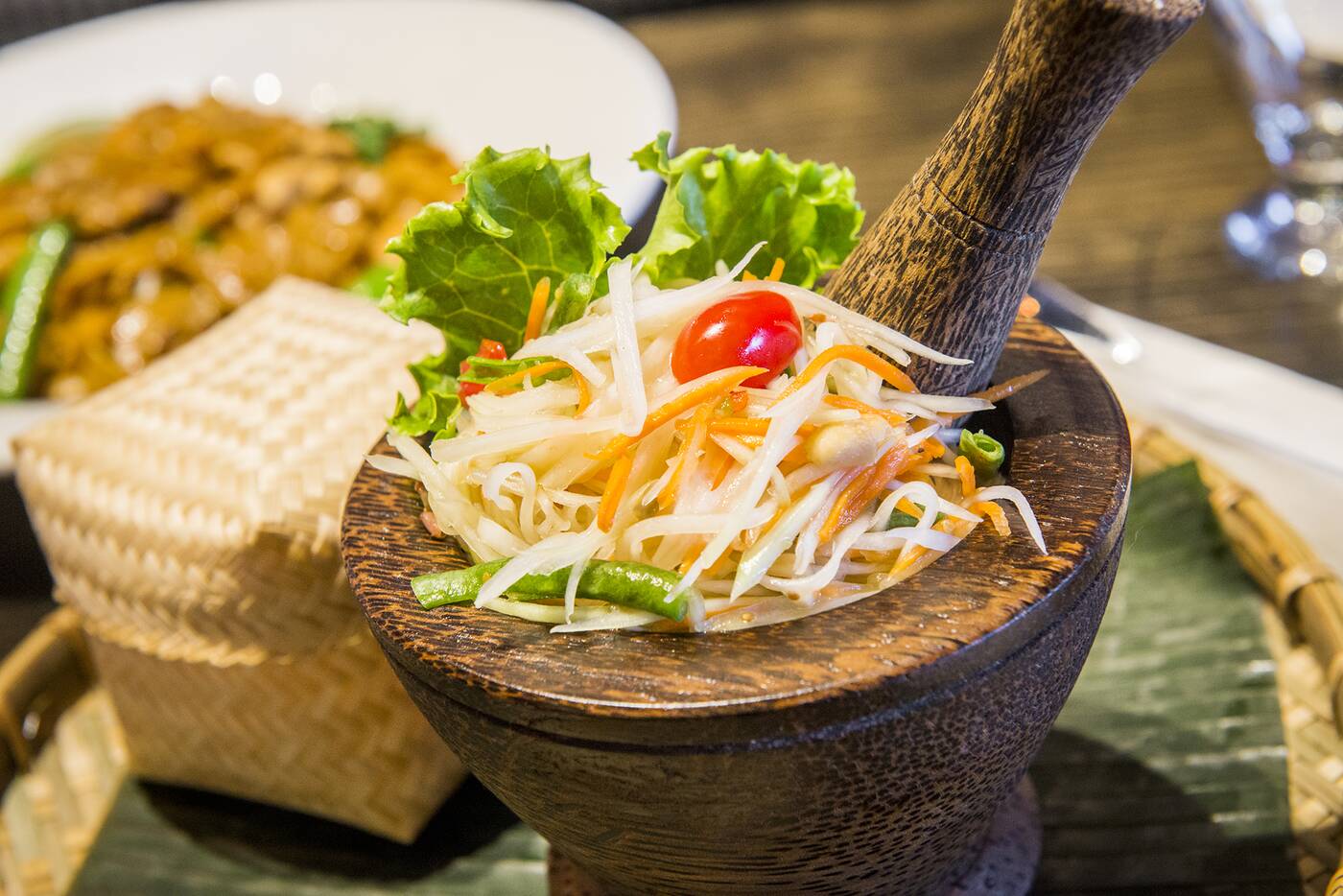 Papaya salad ($8) is refreshing and not too fishy like some, julienned green papaya with tomato, chili, long yard beans, shredded carrot and peanuts. 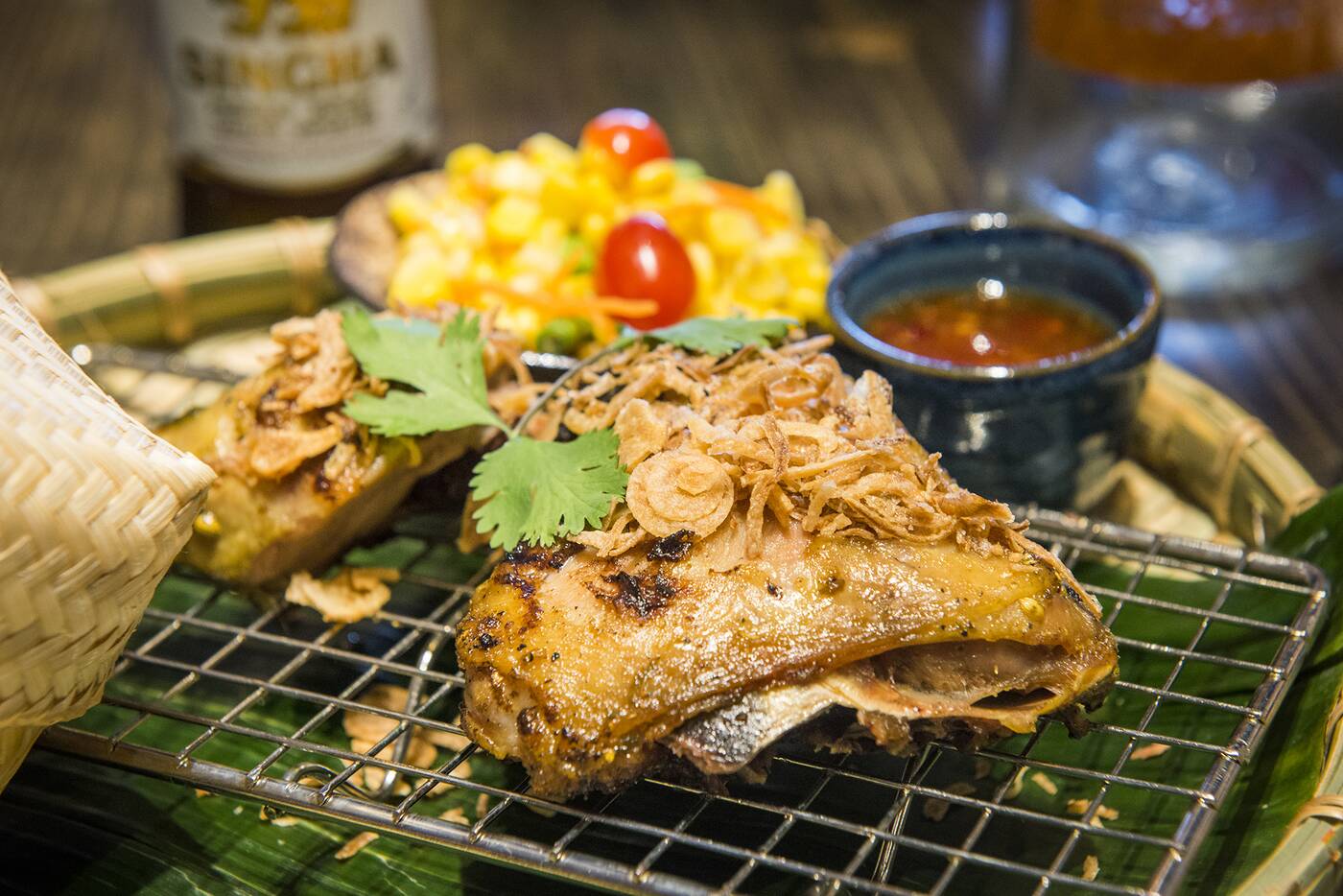 Inspired by a street food dish that’s everywhere in Isaan, their version of ping gai ($12) is marinated BBQ chicken topped with fried onions served with sticky rice and a sweet, spicy corn salad that’s extra fulfilling when you find a hit of chili or peanut. 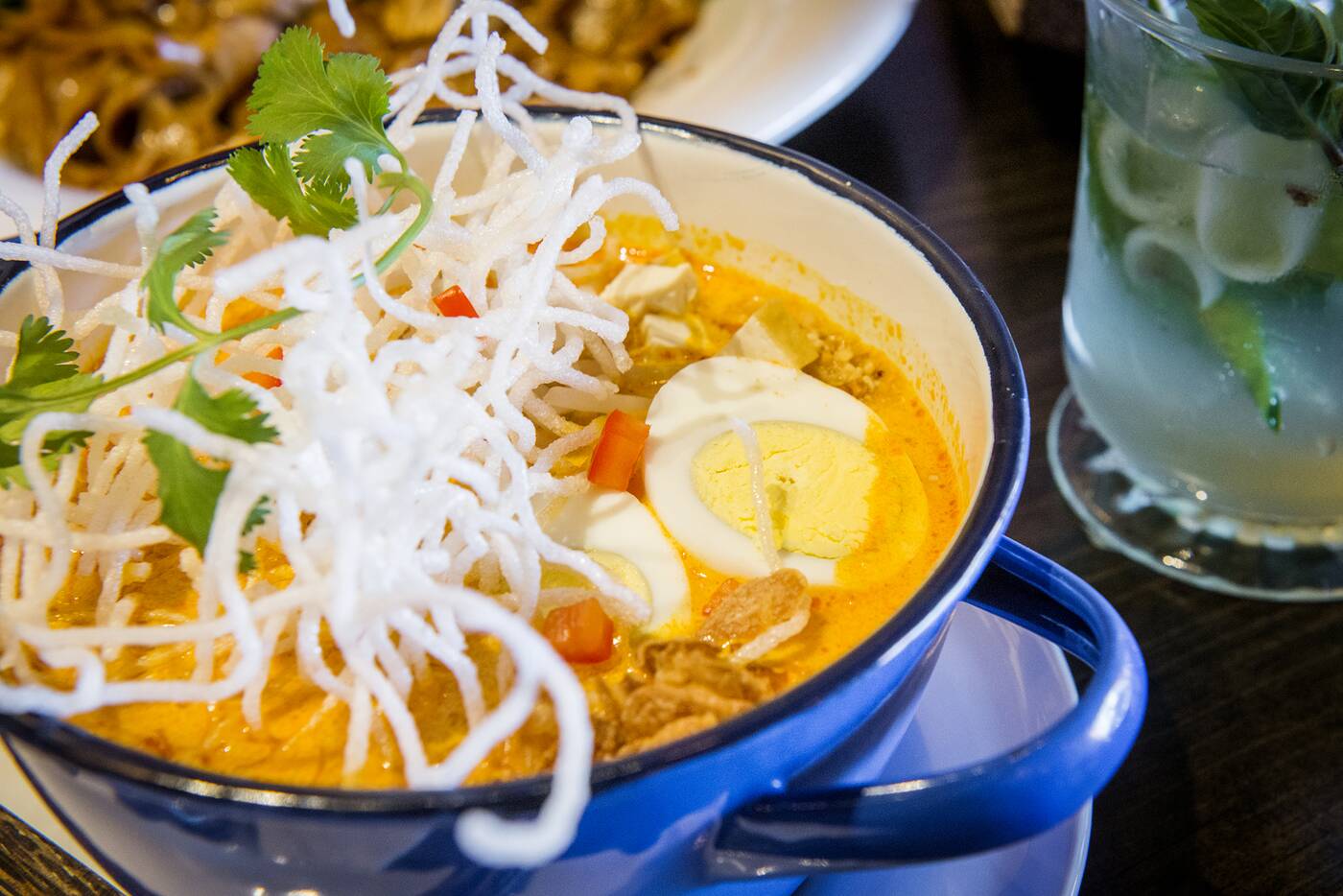 Guaytiaw gang ($13) is presented to me as a better version of khao soi, a beloved Thai dish that similarly incorporates fried and soft noodles in a soup of curry.

On this dish the noodles are much thinner, the curry uses cardamom rather than turmeric, and it comes with tofu, onions, bean sprouts, an egg and your choice of chicken or beef. 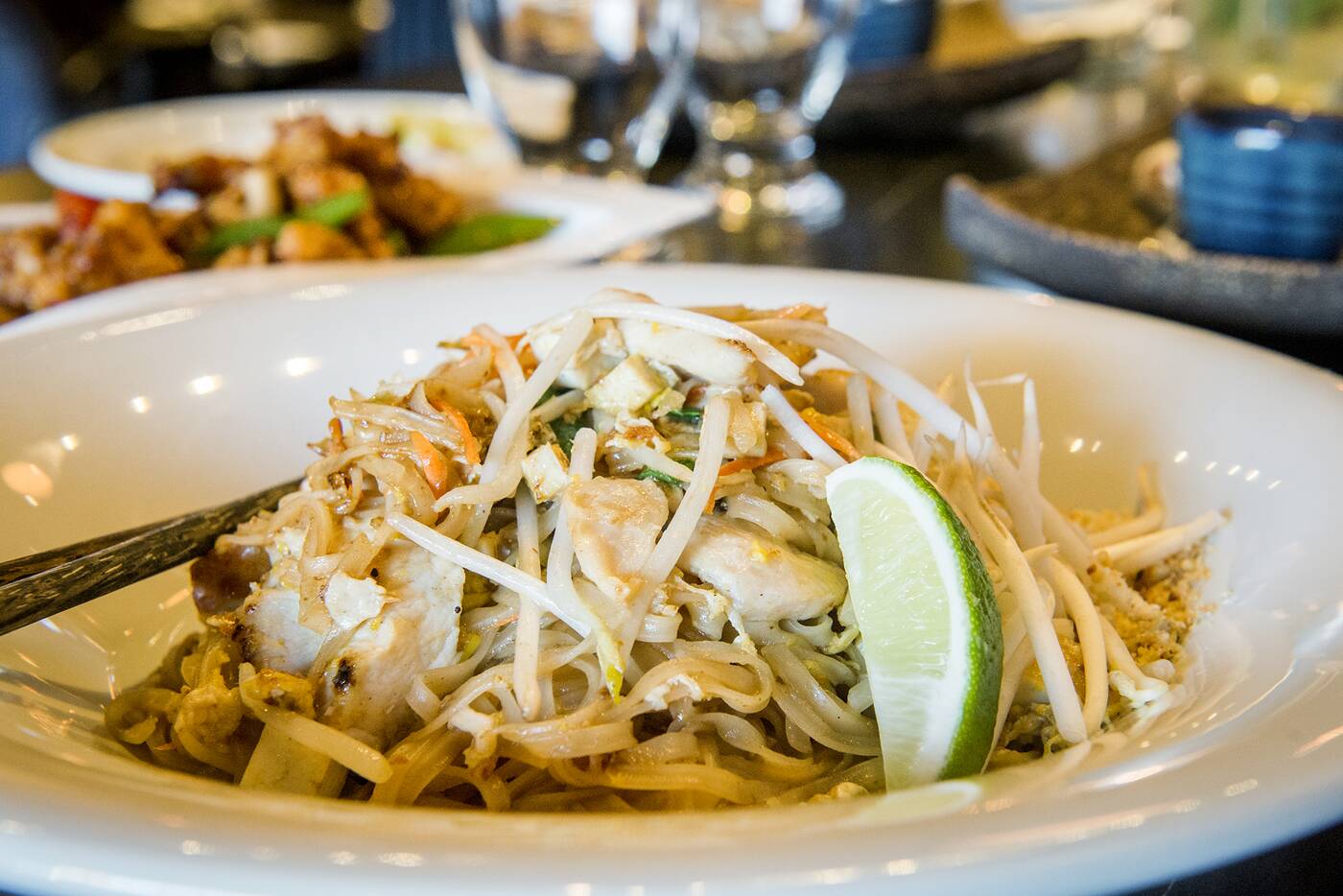 Pad thai ($13) is less sweet than others, using the traditional combination of garlic, shallots and honey to create flavour, rice noodles topped with bean sprouts, tofu, coriander, chives and lime with a choice of beef, chicken, tofu, veg or shrimp. 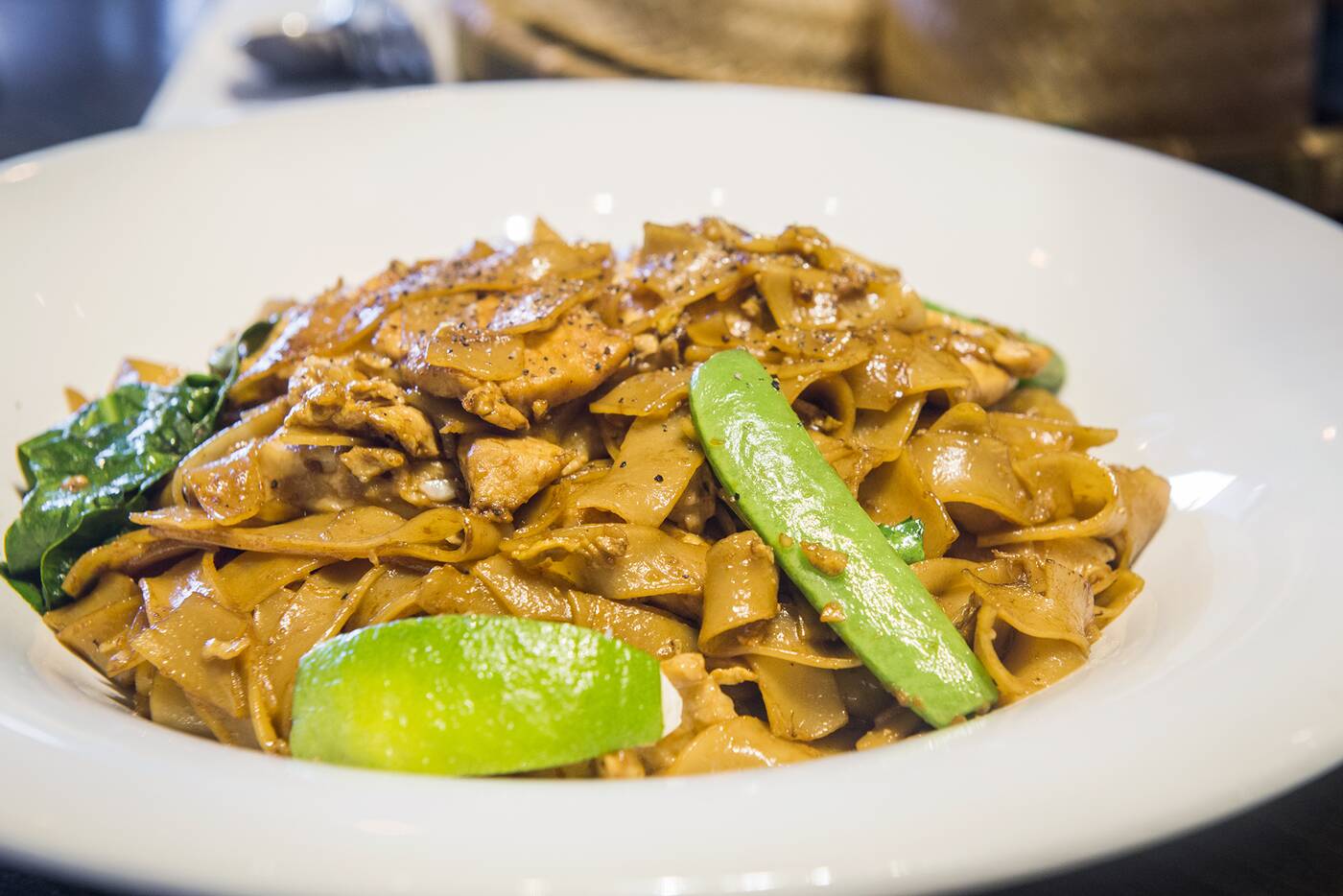 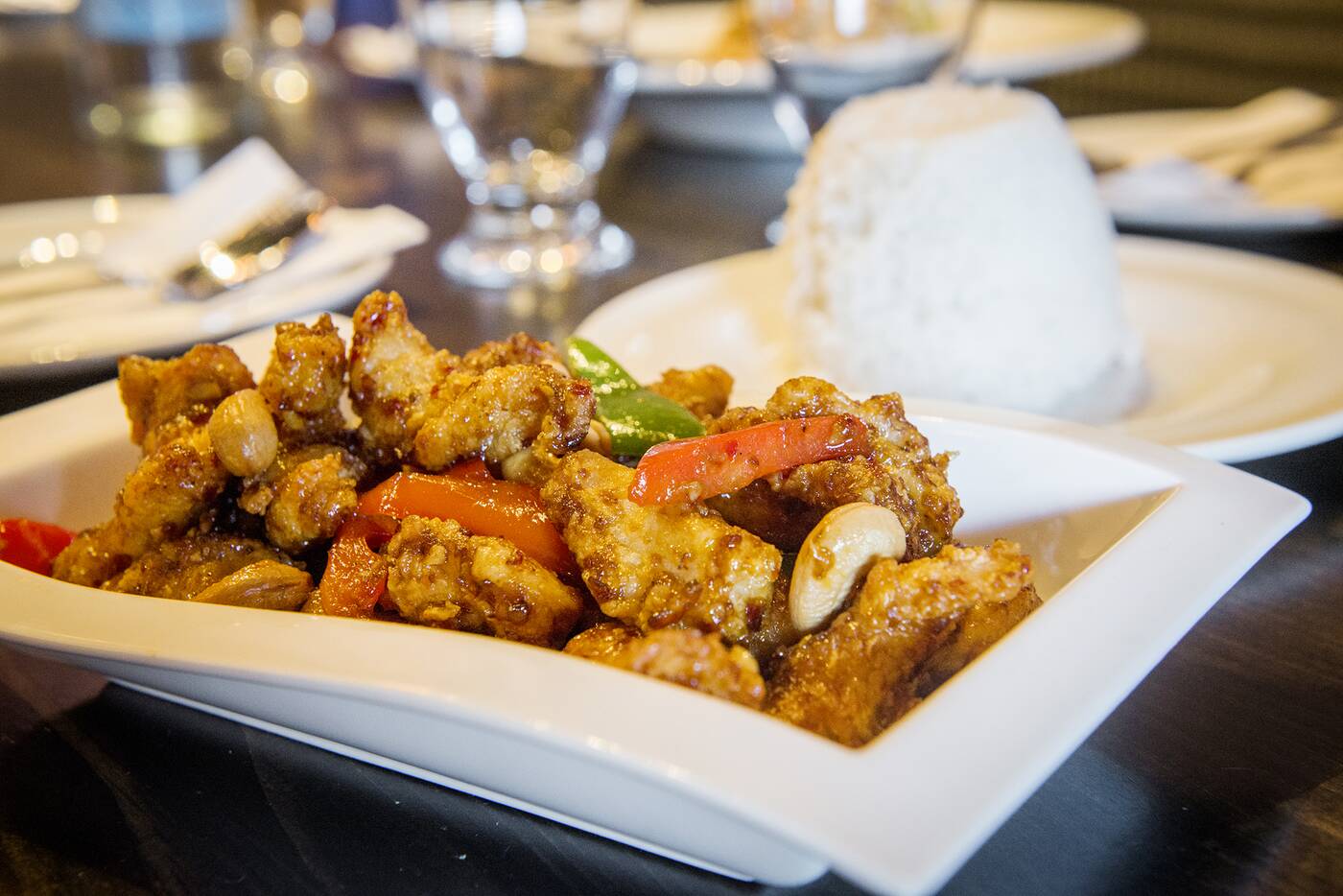 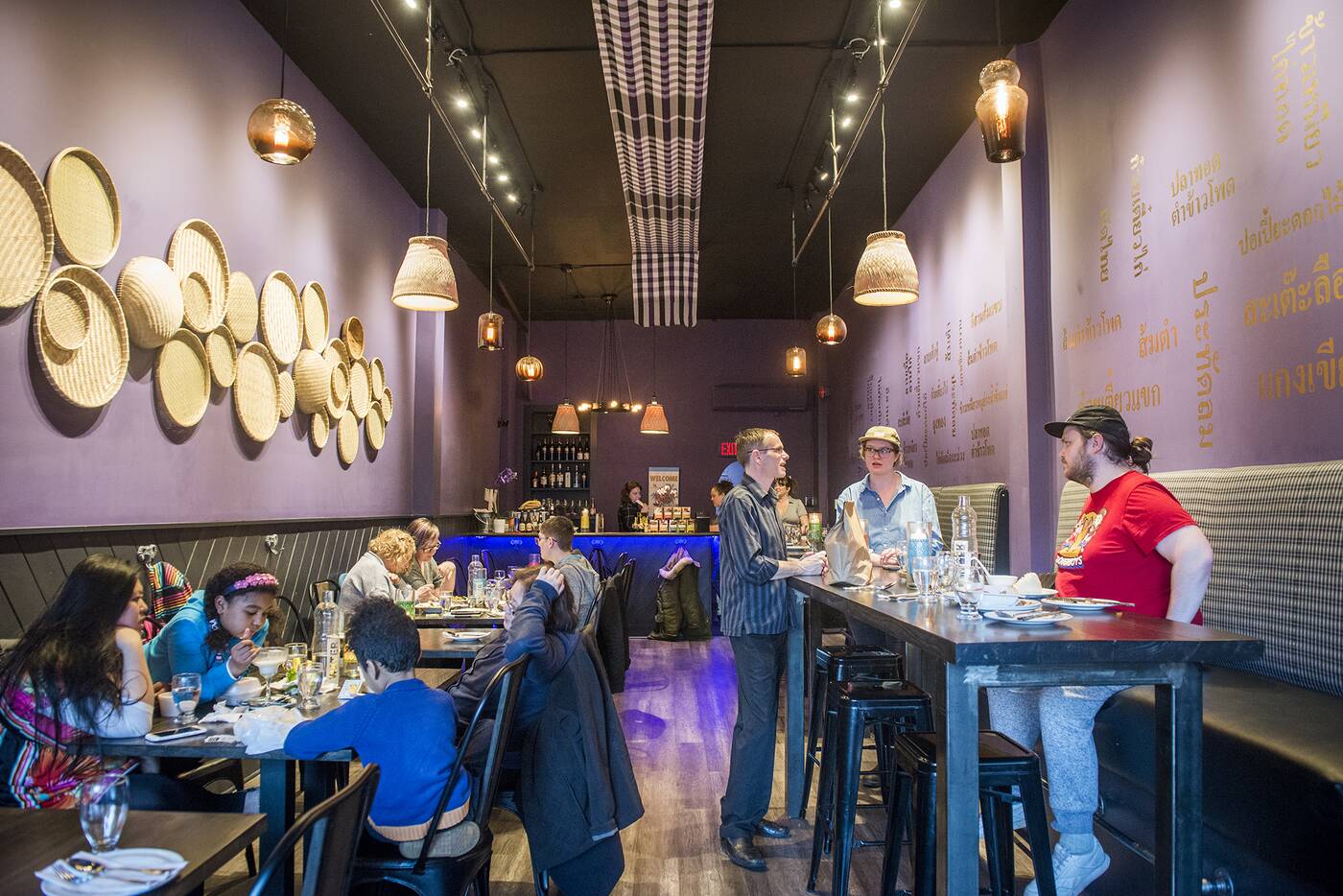 One larger, higher table is mobile and one is stationary, and the rest of the place is filled with smaller, lower tables. They don’t take reservations, so either plan your visit carefully or opt for takeout. 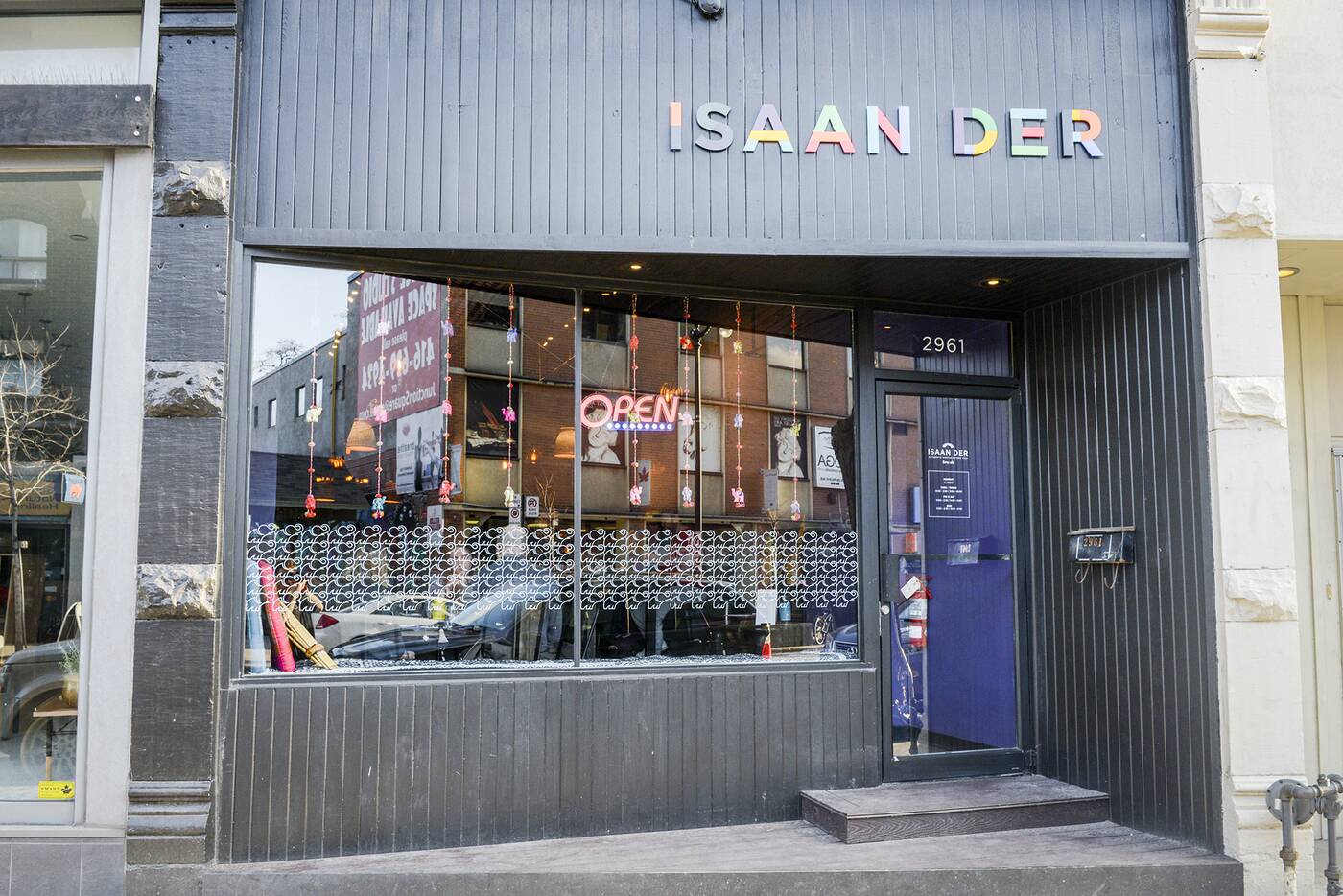