A guide to eating vegan in Toronto

Eating vegan in Toronto is getting a little easier. For a long time, Toronto's culinary scene seemed to have everything - except good vegan joints. The tables have turned, and now the city is teeming with crafty herbivorous spots, plus non-vegan restaurants are adding more vegan-friendly options to their menus.

For more inspiration, see our list of the top 40 vegetarian friendly restaurants in Toronto as well as the top 10 vegan pizza joints in Toronto, top raw food restaurants and juice bars. Want to eat vegan at a place that also caters to meat-eaters? This is the list for you.

Hogtown Vegan
With a menu of lush, creative meals, it doesn't feel like you're sacrificing anything here (just try their "unchicken" waffles). It's the perfect spot for skeptical omnivores and junk food cravings.

Doug's Public Kitchen
Chef Doug McNish is a notable vegan around town - his uptown restaurant is a draw for healthy brunch and lunch fare and he's also a regular at the Brick Works farmers' market. Like his t-shirt pictured at the top of this page? Get it here.

Rawlicious
These guys are fantastic at mocking non-veg foods, from their "fish tacos" to their Don't Be Chicken Sandwich. The vibe is fun and the menu is refreshingly wholesome - and tasty.

Vegetarian Haven
For a nice sit-down lunch or dinner, head here. Everything is Asian-inspired, and the menu changes regularly as they come up with more vegan-friendly creations.

Porter House
A vegan twist on traditional British pub fare and a craft beer menu make this a hit amongst vegans and non-vegans alike. It's a really cosy spot, so it's perfect for date nights.

Grasslands
There atmosphere here is nicer than what you'll find at most of the diner-style vegan joints in the city, and they boast an inventive food and drink menu (and brunch is incredible here).

Kupfert & Kim
Not only is this place vegan, but it's totally gluten-free. They've also got a superb vegan espresso bar, so you can get your caffeine fix without a fuss. Bonus: bring your own containers and get a discount on your order.

Urban Herbivore
A classic. They're seriously passionate about the vegan lifestyle, not only what it does for the body, but for the planet. The food here is lunch-driven, made up mostly of soups, salads, and sandwiches, but the portions are generous to say the least.

Apiecalypse Now!
Located right beside Christie Pits, this vegan pizza and donut joint is perfect for animal-free eaters looking for a cheat day. 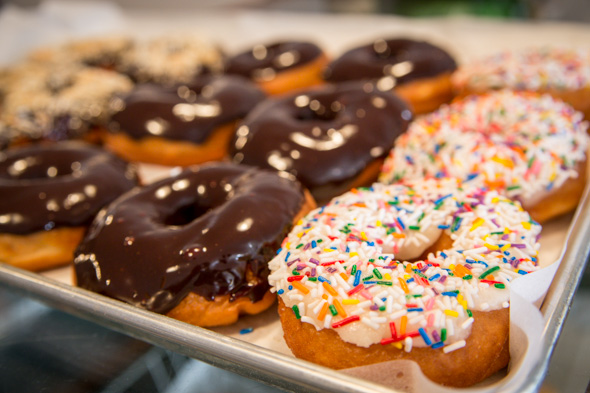 Through Being Cool Vegan Bakery
Come for the donuts, stay for the savoury dishes like vegan (and gluten-free) mac & cheese, cabbage rolls, and a host of other treats.

Tori's Bakeshop
Not just vegan, but importantly also free of refined sugar, Tori's bakeshop takes its vegan-ness seriously but doesn't do much preaching about it. There are lots of gluten-free offerings as well.

Bloomer's
This is a vegan's dream cafe. They serve awesome coffee, good food and fresh baked treats that are switched up daily.

Bunner's Bakeshop
Now with multiple locations, Bunner's was one of the pioneering vegan bakeries in Toronto. Their Junction and Kensington Market locations are still go-to stops for a while variety of sweet treats including cupcakes, cookies, and even soft-serve ice cream.

D-Beastro
This event space on Bloor also operates as a cafe, serving up cupcakes, whoopie pies, sandwiches and soups. 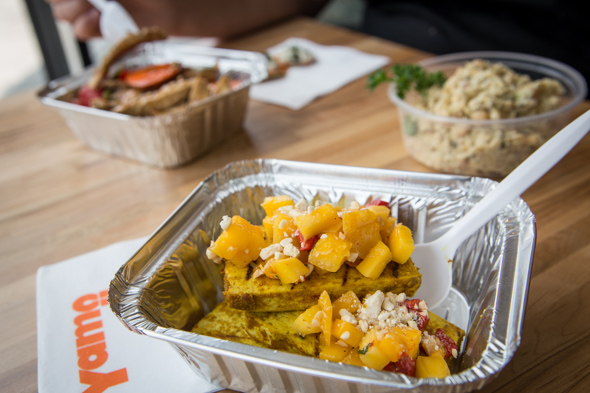 YamChops
Toronto's only vegetarian butcher provides meat-free alternatives that are packaged and displayed in such a way that you'd never know you weren't shopping at a traditional butcher.

Fiesta Farms
This independent grocer on Christie St. has a ton of weird vegan treats, from "vegan meats" and dairy (like Hella Delicious ice cream) to specialty sauces and meal kits.

The Big Carrot
This Danforth staple has a great (if not pricey) selection of organic fruits and veggies as well as grocery staples, baked goods and a vegetarian cafe.

Essence of Life
This Kensington Market favourite has great prices and a wide variety of vegan groceries and health food products.

Vwordmarket.com
While it's not a physical shop, it offers tons of vegan things that are hard to find in Canada - and they have same-day delivery in the GTA, which makes your life so much easier.

Peaches & Green
This place is packed with supplements and specialty groceries that every vegan needs in their life.

Whole Foods
Obviously. It's a big chain, but its vegan offerings, including pre-made foods, are diverse and plentiful.

Toronto Vegan Food and Drink Festival
This new event wants to be an annual draw for vegans in Toronto, offering eats from the city's most reputed vegan vendors, plus craft beer and locally made wine.

The Veg Food Fest
This annual event takes place in early September at the Harbourfront Centre. It's educational and packed with delicious meat and dairy-free offerings.

The Totally Fabulous Vegan Bake-Off
Going strong for more than half a decade, this annual event celebrates the art of baking vegan with dozens of the city's top makers of egg-fee cakes, cookies and other sweet treats. Check out what it looks like here.

Vegan Pop-Up
This relatively new event series is smaller than most of the list but provides a good opportunity to scope out some of the city's lesser-known vegan vendors.

Vegan Groups and Meetups
The Toronto Vegetarian Association has vegan groups in many Toronto neighbourhoods that meet up regularly.

What did I miss? Leave your suggestions in the comments.