Market Street is in the midst of a makeover, and Barsa Taberna is just one of the new restaurants that will soon grace the street. Redevelopment of the tiny street next to St. Lawrence Market has been in the works since 2010, and the results of those years of planning are finally beginning to take shape. Aras Azadian is one of the owners of the new tapas restaurant, and he says the whole concept will be based on life in Barcelona.

Barsa's menu will be half tapas, half entrees. Azadian says he's sick of seeing mains disguised as tapas in Toronto, and he's going to do his best to honour the original concept of the snackable plates.

"Tapas are not supposed to be $13 and $14. You're supposed to order two or three plates each, and share. It's just ridiculous." On Barsa's tapas menu, everything will range in price from $6 to $9. There will be a carefully selected wine list and pitchers of sangria to go along with it.

In case new tapas places aren't your thing (even if they're endowed with 75-seat patios), there is a string of other businesses slated to open on the street in the next couple of months, too. Pastizza is an Italian restaurant opening on the south end of the street. From what I could see by peering in from the street like a creeper, it looks like it'll be a pretty stunning spot. A balcony-esque upper level overlooks the mezzanine area, and as of now, it looks kind of like that pervasive scene from Romeo and Juliet.

Farther up will be Bindia, an Indian bistro which will also be graced by a patio. I've noticed a liquor license displayed in the window, too. Olive&Olives, a small and ambiguously-named chain imported from Montrealwith an outpost in Riverside, will throw open its doors to their second Toronto location here. Down the line from that, Azadian tells me, there will be an espresso place.

The last item on the list, for now, is Market Street Catch, a 36-seat seafood restaurant from the owners of Buster's Sea Cove. There's still one vacant space that appears to be up for grabs, according to Azadian and as far as appearances show. I wouldn't know for sure, though, as the developers wouldn't get back to me after repeated interview requests.

While it's a tourist-heavy area, Azadian, for his part, says his restaurant is targeted toward young professionals who are seeking out an authentic experience. It was actually a bit of a happy accident that he wound up with the Market St. location, he says. He was looking at other areas, but it was hard to find a good fit for his first restaurant. When he saw the space, though, he says he was sold immediately. 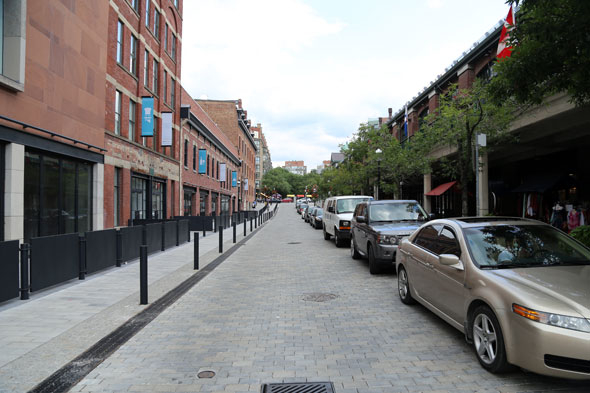 That said, he tells me the renovations have been a nightmare. "The design should have taken a month, and it's been two and a half months to figure out the engineering." They wanted to open the patio in September to have at least a semblance of patio season, but they're now scheduled to open for mid-November.

While there's lots of work still to be done, all of the businesses along Market Street are apparently aiming to have their doors open by the end of the year.