Owl and Goose invites you to jump on the smoothie train

It's a heartening sign of diversity when this city's obsession with donuts, cupcakes and bacon-covered-everything is equally matched by its love of a good, health-boosting smoothie. While there's no shortage of purveyors--from Fresh to Sadie's Juice Bar--there's a new player on the scene, and it's determined to turn you away from the berry-laden, watermelon-tinged, and otherwise fruity smoothies of yore. Enter Owl and Goose.

Launched in 2011, this family-owned business operates out of Roncesvalles and is spearheaded by Vicki Gryspeerdt. Her background is in film, but she's always been interested in alternative medicine. She's been eating healthy for the past 20 years--"weird shit, you know," she charmingly quips--and understands that certain food movements (i.e. raw) aren't necessarily the most photogenic. A devotee recently declared on Facebook that the day's smoothie was "quite possibly the ugliest juice yet, but my god, it's good!"

Owl and Goose focuses on vegan green smoothies (or "Green Goodness")--with ingredients like curly kale, collard greens, sour plum, pea shoots and apples, each sourced from local farmers' markets--and makes them fresh daily each weekday morning. With the entreat of a new kitchen on Roncesvalles, their output is only expected to increase. 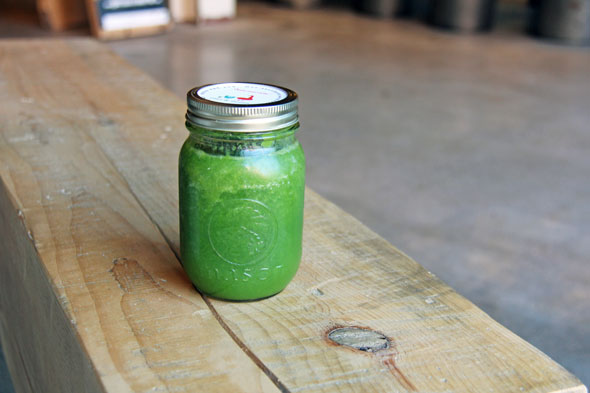 The distribution model is ingenious. Although the smoothies are available for individual pick-up ($7-8 for 500 ml, or $4.50 for 250 ml) at select locations around town such as 7th Sister Bakery and Sunny Joe's Cafe, there's much talk of a mysterious smoothie train. Naturally, when I spoke to Vicki, I dumbly asked when and where I could expect to find the train--there was a moment of confusion, and then she explained.

Hopping on board is metaphorical--it represents a commitment to eating better and leading a healthier lifestyle by signing up, a week at a time. Smoothies are delivered on weekdays only, and the cost is $30 per week (for 1 daily smoothie) or $50 for 2 per day--there are some who request 4 smoothies daily, and Vicki tells me they fill over 150 mason jars per day. A bike courier delivers the smoothies to the designated "smoothie train" location of your choice. You'll find your mason jar, hand-labelled with your name, in a cooler.

Want to sign up? Just shoot Vicki an e-mail through the website, and expect to answer some questions about any known allergies or health concerns, and which location is most convenient for you. You'll only receive the exact location after you've signed up. As for the benefits? Juicing, particularly when taken to extremes, has been equally praised and maligned, but Vicki tells me that the physical change is palpable, particularly among those who have been dutifully drinking the smoothies for a year or more.

Energy, radiance, and (um) regularity, can all be yours--along with (and I can't resist plucking from Owl and Goose's Facebook page again), near obsessive-dependancy. "I miss my smoothies," one smoothie train passenger declares. "I think I may be addicted!"