I'd spoken to Dali Chehimi, owner of Casbah in Market 707, a few months ago. As interested as I was in the camel sliders, they were unavailable. But now the meat has arrived, the burgers are in high demand, and everyone who wanders past the bright yellow shipping container has a knee-jerk question: "is this for real?" Yes, it is.

I'm no stranger to game and unusual meats. I've been known to nauseate even my boyfriend with exclamations of delight upon finding rare animals on a menu. What you quickly learn, however, is that--unless you're blessed with a particularly sensitive palate--there are only a handful of flavors to be found.

All of which is to say, I ate camel, and it was delicious.

Chehimi sources his camel meat from Whitehouse Meats in St. Lawrence Market (and they get it from Australia)--as you'd expect, there's not an overwhelming demand for camel meat in Toronto, rendering the shipments somewhat unpredictable. This, along with the astronomical costs of shipping, contribute to the fluctuating prices--both the burgers and the sliders are sold at market price. Yesterday, it was available for $10 (or $12 as a combo with Chehimi's homemade lemonade). 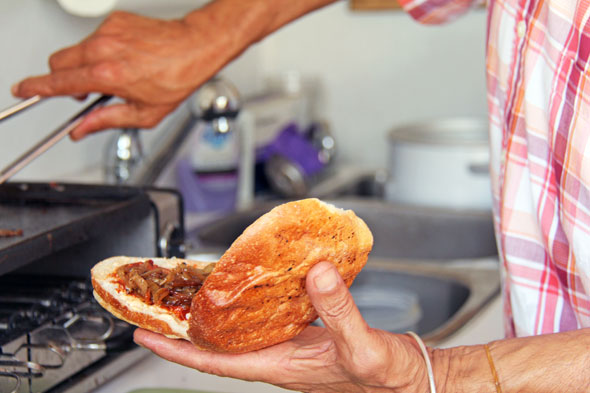 Sweating under a sweltering sun, I look at the burger askance. I had certain difficult-to-voice preconceptions about what it might taste like, but my first bite is beautifully balanced, and showcases the tender, well-cooked camel meat. "Most people say it's like bison," I'm told, and it's a cross between that, lamb and beef.

Most importantly, it's cooked (without fail) to a medium-rare. Any longer on the griddle and it'll dry out, Chehimi tells me. For those concerned with waistlines, you'll be happy to hear that the camel patties are miraculously low fat, and boast more protein and iron than beef.

Then come my second and third bites--after the initial novelty, I'm left with kudos to Chehimi's lean list of accoutrements. There's a freshly-toasted bun from Golden Wheat Bakery (crispy and quick to absorb spices), a hefty helping of handmade mayonnaise, caramelized onions, and the star of the show--Chehimi's Tunisian hot sauce. The harissa is homemade from chilies, garlic, caraway and spices, and is not spicy in the least; it adds just enough flavor without detracting from the texture and mild flavor of the camel meat.

A bit of a spice-monger, I ask whether Chehimi spices his meat--"No, it's plain. I just add a dash of cinnamon." As for ketchup or mustard (oh, the Harvey's generation)? Chehimi answers, "This is how I make it," with the confidence befitting an industry veteran. 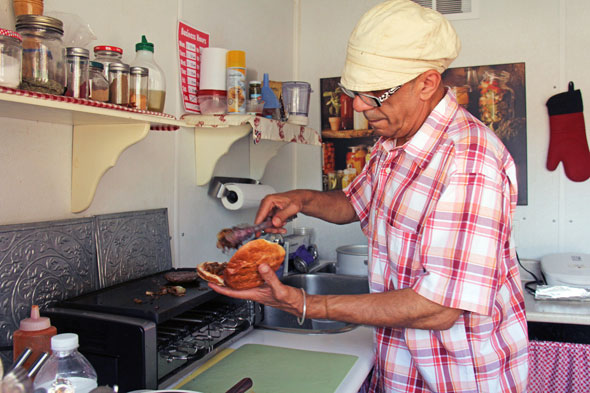 Chehimi is from Tunisia, and introducing camel onto Casbah's North African menu (which is known for its merguez sausages) was not a big leap. "We eat it there, mostly in stews." He tells a story of having seen it slow-cooked in the hot sand. This unusual meat might be more at home in an upscale restaurant (such as one from Chehimi's resume as restaurant manager, including Sassafraz) but a large part of the experience is Chehimi's explanation of his roots, and choice of flavours.

Camel meat is growing in popularity in the Middle East and the U.S., particularly following the recent camel culling program introduced in Australia. Don't be surprised if it starts popping up on menus near you.