Why Balzac's and the Reference Library are a perfect fit

"I love the Reference Library. When I first moved to Toronto in 1991, it was one of my hangouts," Olsen, 48, says. "I lived right by there and spent countless hours in the library doing research for opening my company. It's near and dear to my heart."

Running her own business wasn't what Olsen had always envisioned. The Vancouver native studied French literature at University of British Columbia. After graduating, she lived in Paris for nearly two years, working as an au pair. "I saw the European style of cafés. I fell in love with Parisian cafés."

She moved to Toronto afterwards. The daily grind of a cubicle job catalyzed a path towards the coffee bean grind. "I created Balzac's, because I needed to create a job for myself," she says candidly. "I was working for a large corporation. I had a long drive to work every day. I realized I was not cut out for this.

"I thought about what I could do. I love coffee. I'm a huge caffeine addict; but it has to be good coffee. So I decided to tie all those things together."

Olsen named her business in honour of early 19th century French author, Honoré de Balzac, whose work she fell in love with during her university studies. Balzac was so obsessed with coffee that he wrote a dissertation called The Pleasures and Pains of Coffee.

In the early '90s, Olsen studied the craft of coffee roasting and bean selection at the West Coast Specialty Coffee Training Institute in San Francisco. In 1996, the first Balzac's opened in Stratford. There are six - soon-to-be seven - Balzac's locations across Southern Ontario.

In 2011, Olsen made a successful appearance on CBC's Dragon's Den, the reality show that features entrepreneurs who pitch ideas to moguls ("dragons"), who have the money to turn ideas into reality. Olsen received $350,000 - and took on dragons Bruce Coxon and Arlene Dickinson as business partners - to expand Balzac's into Ryerson University, which opened this May, and the Reference Library.

"I'm very happy with the Ryerson location," Olsen reports. "The feedback has been positive. The Ryerson crowd is great and I think we have one of the best patio spaces in the city." 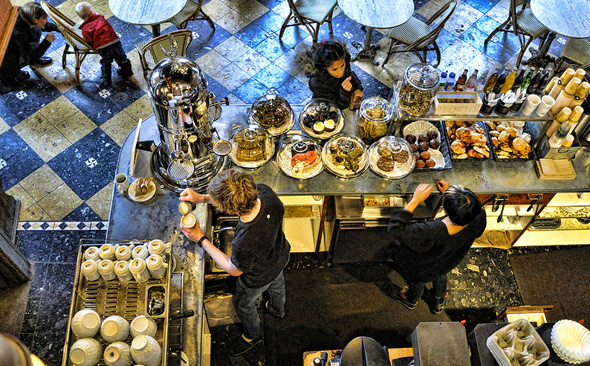 Olsen is influenced by old-world European sensibilities. "Definitely aesthetically," she says, perched on a Parisian café-inspired chair at her Ryerson venue. She teases that Reference Library customers can expect a beautiful tin ceiling and a light-coloured bar that will be reminiscent of traditional cafés.

Olsen also takes pride in her trade. "We prepare everything in a similar way to how it would've been prepared 100 years ago. The type of cappuccino we offer is like the kind you'd get in Italy. Our teas are from Paris."

The Reference Library is located at Yonge and Bloor streets, the symbolic heart of the city where there are no fewer than four Starbucks, one Tim Hortons, and numerous other cafés vying for coffee lovers' attention.

"I don't quite know what it is that we do differently. We all sell coffee, tea and pastries," Olsen muses, but adds that Balzac's has something unique to offer. "It's the quality of what we do that is different. There are people out there who are willing to pay a little more for quality."

Creativity is another way that has allowed Olsen to differentiate her business. For instance, her Liberty Village and Distillery District venues are available to rent for private events, such as weddings.

The new library location will also lend itself to creative inspiration from its literary-rich surroundings. "I work with a lot of writers. I have many friends who are writers. For any writers that want to do a reading, we will make our space available," says Olsen, as she dreams out loud with a summery glass of lemonade.

One writer friend is Margaret Atwood, whom Olsen recently partnered with on the Atwood Blend. Portions of proceeds from sales of the 100 per cent organic and shade grown Arabica coffee beans are donated to the Peele Island Bird Observatory. To date, over $5,000 has been raised.

Can customers expect other literary tie-ins, like a 50 Shades of Earl Grey Tea? "I haven't read that one yet," Olsen says with her characteristic bright smile. "But no, I don't want to lose my focus, which right now, is just the Atwood Blend."

After a busy year that shows no signs of slowing, Olsen admits she has no immediate plans to expand further. "We need to take a breather," she says with a laugh. "We're a small company. It's been a lot of work. I have such an amazing team who are so committed. I need for them to have a break too."

Photos by labonny, marty pinker of the Distillery District location.