Grand Electric now has a patio. That's right, devoted liners-up who begin to swarm around the Parkdale Mexican restaurant as soon as 6pm rolls around--there's now a bit more space to seat you, shortening your wait incrementally.

We arrive shortly after 6 pm, and there are just two seats left at a communal table on the patio, although there's plenty of seating available inside. When a girl eagerly requests seats for herself and two friends on the patio, she's told by the reservation-keepers--those with the unenviable task of dashing hungry would-be patrons' dreams with unfaltering smiles--that they don't take preference for the patio. And in truth, I'm hardly surprised, because it seems that the only place Toronto's more obsessed with than Grand Electric, is its patio.

The Scene
Grand Electric's usual crowd, gathered around a few bleached wood picnic tables (seating four), and several smaller wooden tables with red seats. There's a secondary bar on the patio, offering high seats and cramped elbow room, and the classic throwback to your friends' backyards--strings of large-bulbed lights. The menu is starkly displayed on a white board with black, block letters. You get a bit of Grand Electric's music mix, but surprisingly, it's a quieter place to relax.

The Drinks
They're the same outside as inside, which means lots of bourbon, $8 cocktails, as well as canned, bottled, and draught beer, and wine. The Grand Electric Sour isn't terribly lip-puckering, with its blend of vanilla bourbon, agave syrup and egg white, while the Margarita is classic lime, agave syrup, "ghetto tequila," and a sugar salt rim--both are delicious. The draught beers shine ($6.50-$8.50), including the rapidly-becoming-infamous Bellwoods saison, and my new favourite--the sweet, and marked by a flavour that's difficult to pinpoint Cerveza monkey. Bottles and cans range from $6 to a $25 growler. 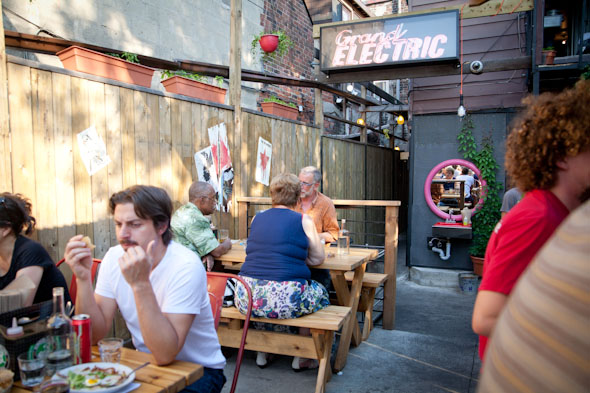 The Eats
Delicious as always, and with sometimes lament-inducingly small portions, there's not much I can say about the menu that hasn't already been expressed. The tacos are flavourful ($3.50 each) yet tiny, and range from pork belly al pastor, to beef cheek, to pork carnitas. For simple tastes, there's the guac and chips ($8), while more discerning appetites should definitely taste-drive the tuna ceviche and spicy squid (both $9), or the Miami ribs ($13).

Key Features
This is another uncovered patio, although the outdoor bar has a small awning. The crowd, at 6:30pm, is full of post-work energy and more than a bit pleased at their good fortune to have scored seats. The kitchen has dual openings into the restaurant and onto the patio, meaning that strategically placed diners could engage in a bit of neck-craning to witness the chefs at work. The light-colored wood--used in the furniture, the bar, and even the fence that encloses the patio--is at odds with Grand Electric's dark wood interior. Think of it as a summer look.

And other details
If you find yourself on Grand Electric's patio, you should thank your lucky stars. And then, depending on your particular disposition, either polish off your meal quickly and make way for the next eager beaver, or be a dick and sit tight for hours. In either case, I salute you.

Capacity: Does it matter? You're still going to have to wait.