Cold Tea's patio has been around since they first opened, but it was only formally launched in May, with earlier hours on Friday-Sunday beginning around the same time. When we stop by on a Saturday evening, it's already nearing seating capacity, and a large crowd is gathered around the inside bar — currently the only way to score a drink — while other mill back and forth, dim sum and sauces in hand. It's perhaps testament to Cold Tea's under-the-radar success that, after we finally find a seat, we overhear someone say, "This is the place to be."

The Scene
Twenty and thirty-somethings crowd around the five long tables coated in cheeky plastic red-and-white checkered tablecloths. Space at the tables is at a premium, with the question "Can I sit here?" practically echoing around the space. The chairs are purely perfunctory plastic stools, and two long lines of criss-crossing Christmas light-style lights illuminate the uncovered patio, penned in between the concrete back walls of neighbouring businesses. Music spills out from the bar's interior — DJs typically spin from Wednesday to Sunday.

The Drinks
Cold Tea is known for their cocktails, and for good reason. It's a bold choice to not have a drinks menu — you either need to know exactly what you want (Gs and Ts, I'm looking at you), or trust in their eerily omnipotent ability to predict what you're craving. "You like Aperol?" co-owner and bartender Oliver asks. Too bitter. He smiles. "I know just the thing." My lip-puckering drink comes dressed with cucumber slices and is utterly refreshing. I am, as I've been on every visit thus far, impressed.

Cocktails will typically run you around $10 for 2 oz., with some wiggle room either way. As far as beers go, they have Old Milwaukee, Labatt 50, Rolling Rock, Guiness, and others availalbe in cans and bottles, and Sapporo, Blanche de Chambly, Mill St., and Great Lakes on tap. Their wine's not bad, either. 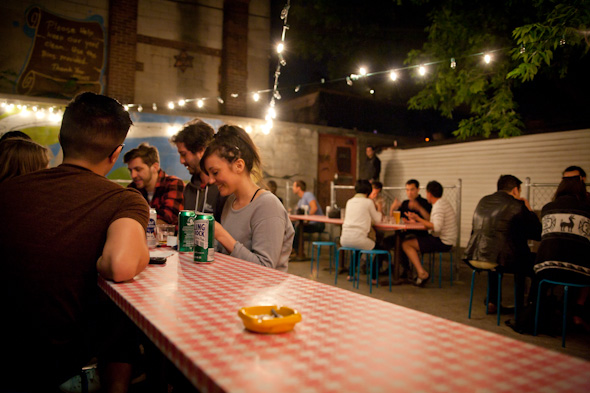 The Eats
One of Cold Tea's most notorious appeals is the dim sum cart upon entry, where you can pick up dumplings at 3 for $5, or 6 for $9, or buns for $3. On Saturday, the options range from pork and shrimp dumplings to BBQ pork buns. When asked if there are plans to expand the menu, Oliver gamely answers, "Yes," then almost immediately adds, "Lipsies." They've been fairly active in the pop-up scene, so on any given drop-by, you might be treated to some unexpected treats.

Key Features
The communal seating set-up was no doubt conceived as a way to forge new, night-long friendships and strike up conversations. Instead, I feel like I'm in a fishbowl, subject to the eavesdropping and roving gazes of everyone else at our table. When a couple plops down right beside us, we knock elbows, and ten minutes into our impassioned conversation about Prometheus, we realize that they've been silent the whole time. I might've unintentionally ruined the movie for the poor unsuspecting suckers, and I'm a quiet talker to boot. Suffice to say, this is not the place — despite its quaint, comfortable atmosphere — to have a soul-baring conversation.

And other details
The crowd is cool, chill, and not given to any drunken displays of douche-baggery--as far as I saw. Well-suited to Kensington Market's relaxed vibe, this patio is just secluded enough to feel like you're hanging with 47 of your closest friends, and if you're craving more snacks, just saunter on out of Kensington Mall for some of the city's most eclectic dining options. 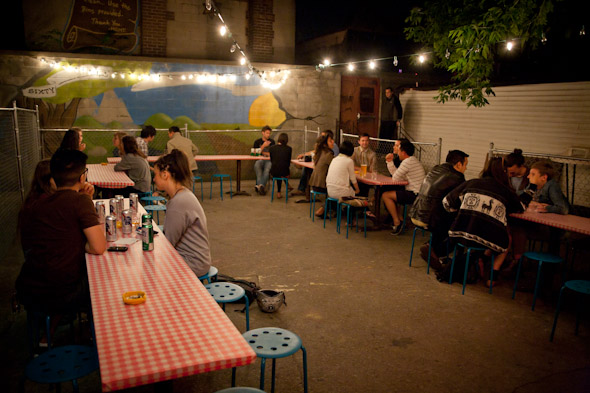