I am always interested in what food can tell me about a person. In "The Fridge Files" I provide candid snapshots into random and willing Torontonians' lives by categorically breaking down the heart (or maybe more appropriately the belly) of their kitchens, the fridge.

In this edition, I dig around the fridge of food writer Corey Mintz and his roommate.

Confessed Fridge-o-Phile
When I arrive, Corey and I get to talking about why I do the Fridge Files. I mention how much a fridge can tell me about a person - not only by seeing what they eat, but what state they keep their fridge in. 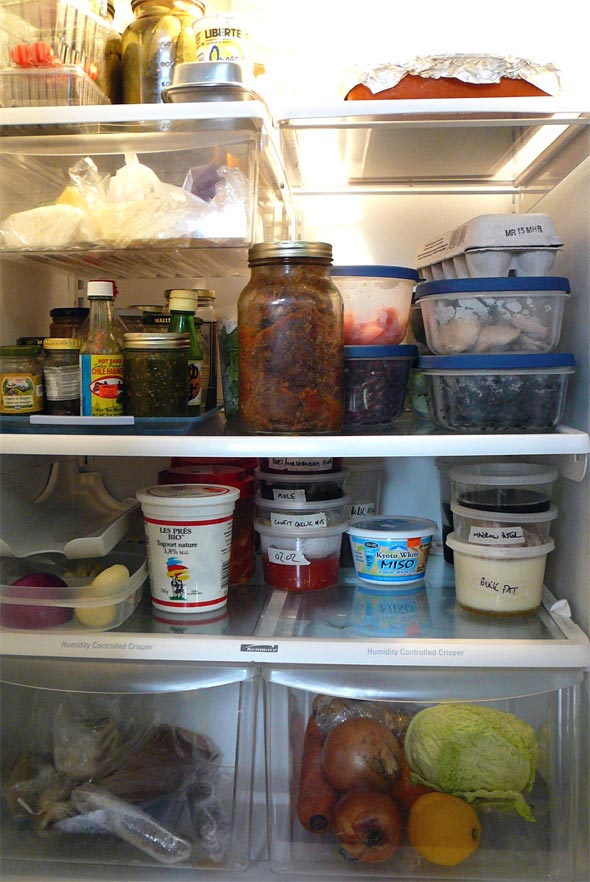 Corey admits to being a fridge-o-phile himself, having to open people's fridges and freezers when he visits their homes ("I ask first, of course," he explains). Nevermind the medicine cabinet; he feels the "contents of your fridge are a window to your personality." After doing a bit of digging, I stumbled across an article he wrote about just that, including a fully indexed photo of his own fridge.

A Tad Obsessive
I find out Corey has a roommate, Pippa, who was not home when I dropped in late on a Tuesday afternoon. So I get the full Corey run-down of the fridge.

As it turns out, what Corey means when he says he is cleaning out the fridge is that he throwing away two unlabelled containers of whipped cream he made. That's it. The rest of his fridge is spotless. And utterly organized.

I'm talking neat stacks of containers, contents labeled and dated, and prep for the coming night's dinner neatly stacked and waiting to be consumed. Condiments are organized and placed on their own removable tray. All of Pippa's food comes under the same scrutiny, and (in the fridge at least) there is very little evidence that she even lives there. 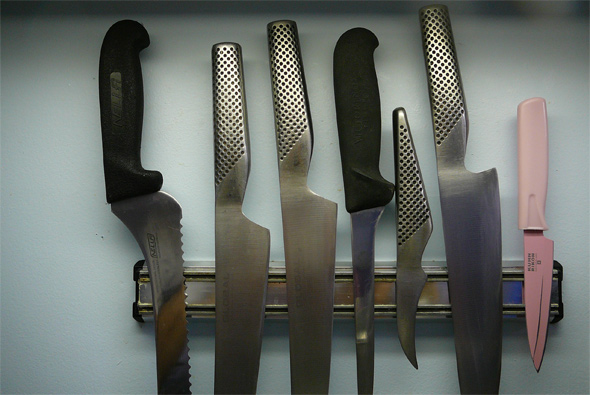 Same goes with the freezer: stocks and jus and braised meats and beef cheek ravioli are carefully stacked so that the labels are all straight and facing the same way. Needless to say, the knife and pot racks are similarly neat and tidy.

It's not surprising, considering that Corey is a restaurant critic turned food columnist who trained at George Brown and has worked in restaurants himself. If only all kitchen staff kept their fridges so tidy.

According to a friend of his, he thinks it's a good way to woo the ladies. 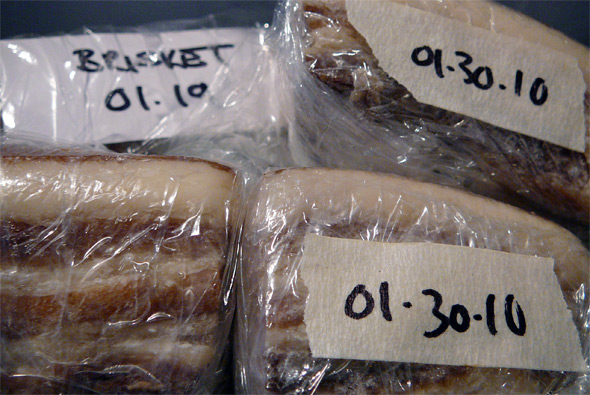 Not only is there order and organization, but meticulous note taking and multi-tasking too. While we chat, Corey has three notepads on the go. One for notes on general stuff we are discussing, one for a precise recording of the oxtail chili recipe he is cooking for dinner tomorrow, and one is a schematic for the plating of the five courses he will be serving.

At the same time he is downloading new episodes of The Colbert Report and The Daily Show, and showing me twitpics of bizarre sandwiches (more on that later). Plus there is one pot of oxtail chili bubbling away and another with duck stock reducing on the stove.

The Hostest With The Mostest
The above mentioned oxtail chili is beautiful. Being the gracious host that he is, Corey offered me a taste. The flavours are perfectly balanced, complex, earthy and satisfying - with what I thought was the perfect amount of spice, a nice little kick. Corey worried it might get too spicy after sitting till the next night. 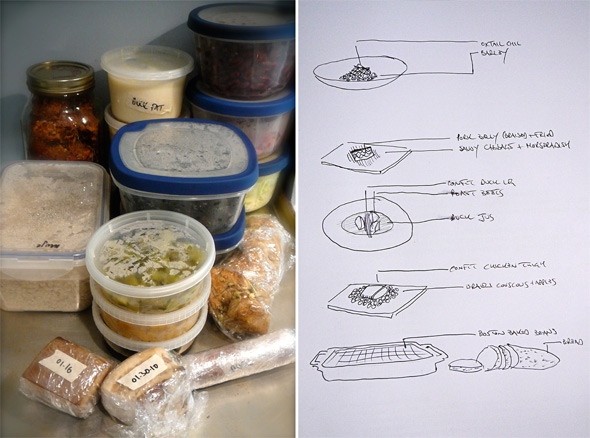 He was preparing this meal for friends - a five-course menu consisting of oxtail chili, pork belly, duck confit, chicken confit, and baked beans. Careful thought had gone into planning of the menu, selecting items that would be both delicious and seasonal while affording him the time to actually hang out with his guests.

Items like chili and baked beans need only be re-heated and don't require a lot of fussin' in the kitchen. Almost everything for the upcoming meal was prepped and stacked in the fridge, awaiting marching orders.

And true to form, before the taste of the chili has even cleared from my palette, the dish I ate from had been washed and put away. 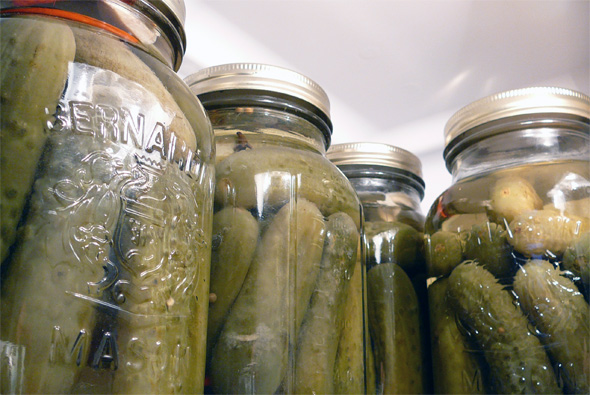 A Fridge For Grandma's Pickles
Corey has a small second fridge filled with pickles made from his grandmother's recipe. It was also her fridge - Corey inherited it and stocks it with love.

Sadly, I found out yesterday that all the pickles had to be tossed into the compost bin. In a tale Corey calls "Pickle-Tastrophe", he laments the loss of his pickle children.

Out & About
One of the main reasons Corey and Pippa live where they do is the proximity to Kensington Market. Almost all of the grocery shopping is done there, with the exception of bread (mmm... Challah) from Harbord Bakery.

This house has also got serious love for the boys at Sanagan's Meat Locker. Corey thinks they've been a huge boon to the market, so that is where they get all their meat.

4 Life Natural Foods gets some love too, but some stuff is just too expensive there. For cheese they like 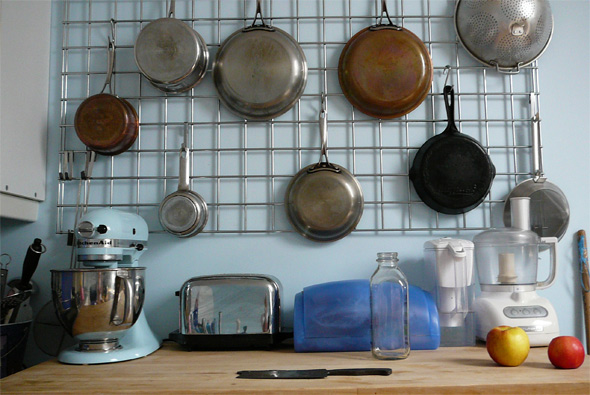 Peanut Butter & Sardines
As for go-to eateries, admittedly there isn't much in their 'hood. Corey mentions a new diner in the market that has re-opened under new management recently - The Bellevue. He says he keeps trying to go, but they are never open.

He shows me a twitpic of the menu, which has the infamous peanut butter and sardine sandwich I had already heard about from other incredulous market dwellers. I think it must have been contemplating the inclusion of cheese and hot chili sauce on this peculiar sandwich that sent Corey out after I left to actually try it. He only made it through half.

Pho Hung is good for soup, especially when Corey's sick. Pippa has been forced out on runs more than once.

Corey also stops in at Sam James weekly, on the way to the comic book shop.

Hoof Or Die
If The Black Hoof were a lady, she would be Corey's heartthrob. He has a love for this restaurant that runs deep. Even though it's a 20-minute walk away, it is his go-to restaurant for a drink or a meal. He eats there at least once a week.

Interested in having your fridge profiled? E-mail lauren[[at]]blogto[[dot]]com.
Photos by Corey Mintz.