Thomas Keller, the world-renowned chef, was in town last night for a Q&A session with the Cookbook Store's Allison Fryer at the Toronto Reference Library. The French Laundry, per se, Bouchon, and ad hoc - are scripture in any foodhead's bible.

The two talked about the warmth and comfort Keller finds working at a stove, coming to the realization that it's time to pass the knife down to a new generation of chefs, and the personal stash of salt he carries for dining out, among other things.

And while this foodhead has never had the opportunity to eat at any of Keller's restos, I did jump on the opportunity to hear him speak and plug his new book, ad hoc at home, with recipes from his more casual family-style hot spot in California.

Keller's rise to fame has been impressive, to per se the least. He sweat it out in kitchens in the U.S. and France and was at the helm of several restos before finding an old French steam laundry facility in Napa Valley that he deemed to be the perfect spot for a fine French eatery.

Then he spent the next 19 months raising 1.2 million dollars to open The French Laundry in 1994. It soon earned three coveted Michelin stars and proved to be Keller's launching point into widespread culinary fame.

Since then he's also opened restaurants in New York (another 3 Michelin Star), Las Vegas and Beverly Hills, all to the culinary delight of food fanatics and critics alike.

Expansion started off with spin-offs located just down the street from the flagship French Laundry. According to Keller, Bouchon was launched as a place for the chefs at his resto to eat dinner after service, when everything else in sleepy Yountville, CA, was already closed.

The Bouchon Bakery was born because Keller needed somewhere to perfect the bread served at his other restaurants.

Like any chef worth their salt, he is a perfectionist who pays keen attention to detail. He is also fiercely committed to mastering every aspect of cooking - from sourcing, storing, handling and preparing each and every ingredient in his kitchens.

This discipline and commitment to perfection is a theme that kept coming up in the Q&A last night. He emphasized the need for routine and repetition in the kitchen as necessary for mastering cooking - you repeat something over and over and over again until you can perform it without thinking. That's when you've mastered it. 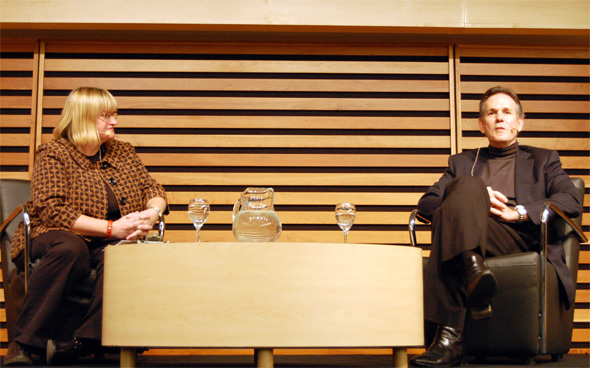 Another theme that kept coming up throughout the Q&A was Keller's commitment to seasonal, local, high quality ingredients (easy to do when the French Laundry is located in California and makes somewhere in and around $1million a month).

He razzed Cookbook Store owner Alison Fryer for eating blueberry muffins in November, and at a visit to Pusateri's on Monday afternoon tried to convince a shopper there that she should not be buying peaches at this time of year. Now that's commitment.

As for Keller's impression of the Canadian food scene? He admittedly knows very little about it, although he did name drop Martin Picard of Au Pied de Cochon, The Black Hoof, and One.

The layout of the book is user friendly, with a few pages at the beginning on how to become a better cook and others photographically depicting the "mise en place" (preparation of ingredients and equipment) needed to complete a recipe.

One feature I would have liked to see is a listing of individual recipes in the table of contents, however it did force me to look though the book and not just skip ahead to a particular recipe.

A beautiful book from a renowned chef, with very winter friendly recipes that challenge any cook to hone their skills. It will definitely keep me busy during my winter hibernation this year.

Fun Fact: Keller consulted on the foodie film favourite Ratatouille. He gave cooking lessons to the Pixar crew, helped with menu development for the fictional restaurant and made a cameo in the American version of the movie by lending his voice to a restaurant patron. He also lent his name to a children's companion cookbook too.