It's getting harder and harder for the average Toronto resident to make ends meet amid record-breaking inflation numbers, a housing market that's nearly impossible to enter, and rent prices that are now starting to surpass 2019's ridiculous pre-pandemic highs — all while Ontario's minimum wage remains frozen at $15.50 an hour.

Salaried employees in some industries are expected to start making more money next year as job markets remain competitive, but workers making minimum wage have no guarantees of earning anything more than what the government mandates of their employers (with some exceptions.)

Tough times will thus get even tougher for people in Canada's largest city who aren't already rolling in wealth, and experts say that low-wage workers will be impacted the most.

A brand new report from the Ontario Living Wage Network, which calculates and tracks how much it costs on average to cover basic expenses in different communities across the province, puts the 2022 dollar-per-hour amount for those in the Greater Toronto Area at $23.15.

This is up from $22.08 per hour in 2021, representing an increase of just over 5 per cent, making Toronto the most-expensive region in Ontario by far. 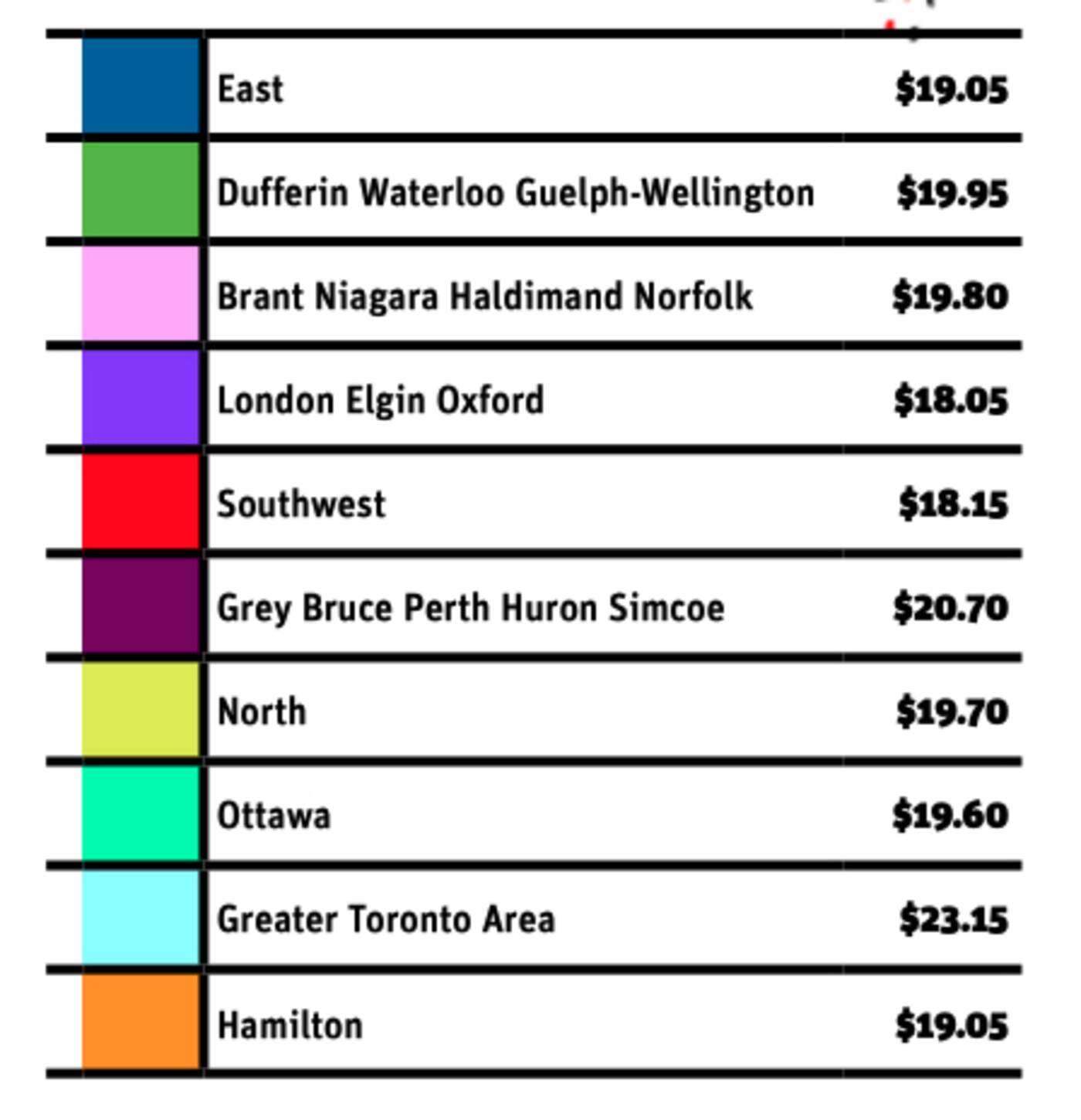 The OLWN calculates how much a resident would need to earn per hour to live comfortably across different parts of Ontario. Image via Ontario Living Wage Network.

"Many areas will see an increase in living wage rates over last year's calculations," wrote the OLWN of its November 2022 figures.

"Sault Ste. Marie's rate will increase by 21.6 per cent to $19.70 per hour, which is the largest increase. Thirteen areas, as defined by the previous boundaries, will see an increase of over 10 per cent."

The organization blames the rising costs of necessities, many of which have "gone up by unprecedented levels," for driving up the living wage in many parts of Ontario.

Not to be confused with Ontario's government-set minimum wage, the living wage is described by the OLWN as "the hourly earnings someone needs to earn to have an income that covers their cost of living."

The group calculates this number using a variety of different metrics, including the costs of a basket of basic goods and services for three types of families (two parents aged 35 and two children aged 7 and 3, a single parent (35) with a child aged 7, and one single adult.)

"To calculate the living wage, we determine the after-tax income that each adult would need to have to cover the expenses included in the basket for their family type," notes the org.

"For the wage calculation, we consider government transfers the family may receive (like the Canada Child Benefit, the Ontario CARE benefit) and the payroll and income taxes the adults may pay."

The bottom line is that hourly workers need to be making significantly more than Ontario's $15.50 minimum to live comfortably in Toronto or pretty much anywhere else in the province.

"Between April 2021 and April 2022, Statistics Canada reports the price of food increased by 9.7 per cent," explains the report.

"The cost of food is one of the highest costs included in the living wage calculation. The rise in food prices across our province have added significantly to the increase in living wage rates for all communities."