Transit lines are expensive and require years of both planning and political support to become a reality. And though the city is in the midst of the largest infrastructure investment in a generation, it’s no surprise that Toronto is still critically underserved by local and regional transit routes.

But what if Metrolinx had a blank cheque and the political support to invest a whopping $100 billion on new transit routes?

Reddit user Ritachi has answered that hypothetical with a transit fantasy map that envisions what could be built for this colossal sum of money.

Including existing, planned, and under-construction transit infrastructure, Ritachi’s map envisions a system with 8 urban rail lines with a combined 233 stations across almost 300 kilometres of track, as well as 22 regional rail services with 142 stations spanning over 840 kilometres of track. 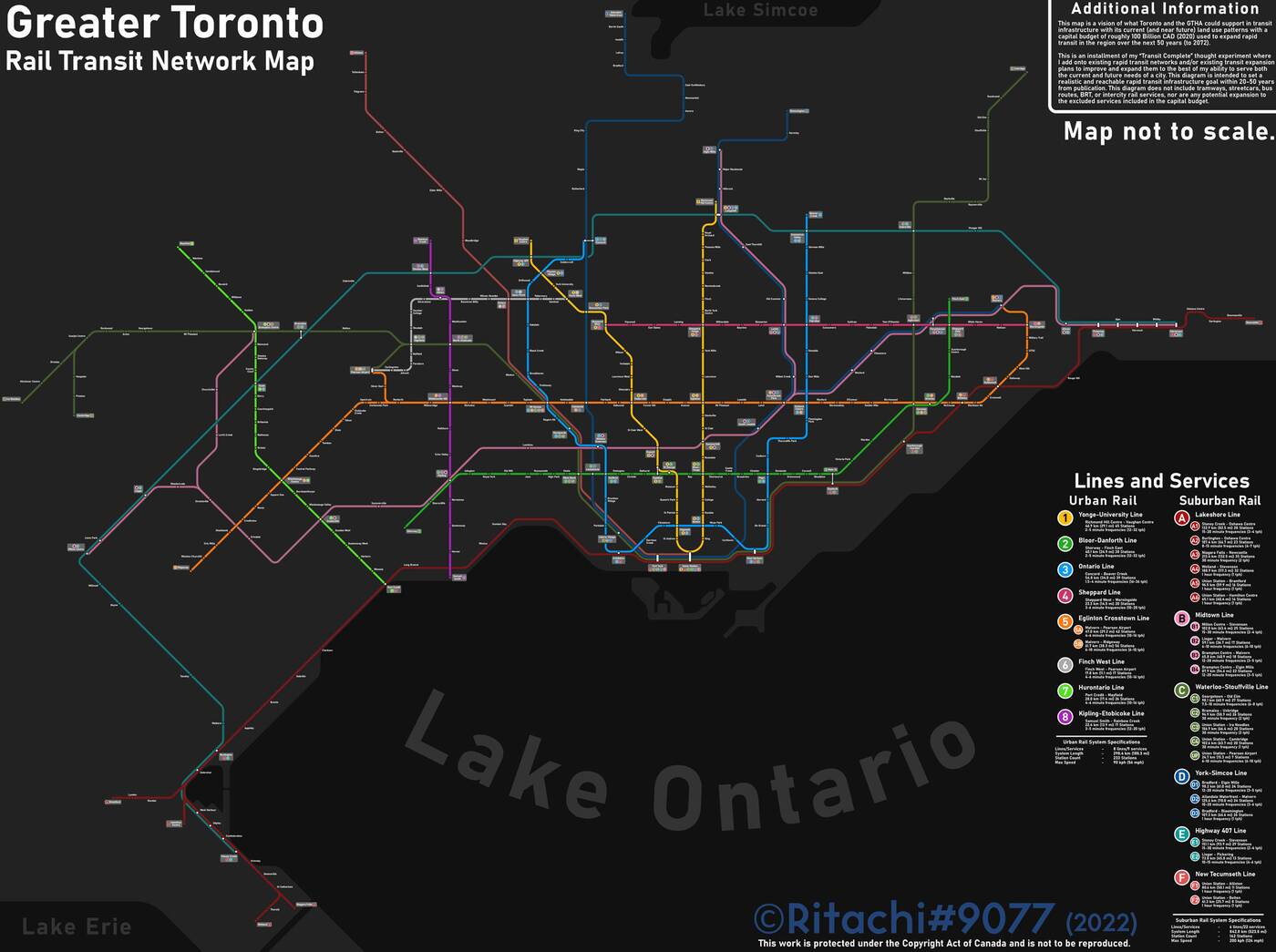 In the original Reddit post, Ritachi explains that over 40 hours of work went into the map, and though it is a fantasy diagram, all of the new lines included required careful and extensive research.

"I spent a lot of time on this diagram, and while the title says 'fantasy,' I think most of this map is very much achievable and should be a goal for rapid transit over the next 50 years (to 2072/2073)."

"Why do I say/believe this? Because the region is spending 38 billion CAD right now over the next 15 years to build rapid transit (projects like the Ontario Line, GO Expansion, Eglinton West LRT, Scarborough Subway, you get the idea)."

"My budget does not include projects currently under construction as under this diagram, I consider them funded and uncancellable (I know it's not impossible to do so but any politician who does would be committing career suicide). Most of these lines are referenced in an official capacity either as potential future corridors to be seriously considered or projects that "need" to be built soon."

Ritachi explains that the proposed "100 billion CAD over 35 years from 2037 (15 years from now; ~2.86 billion/year) is roughly on par (though slightly more funding per year, currently ~2.54 billion/year) with what we're spending on rapid transit right now."

Much of the $100 billion price tag is allocated to the Midtown corridor, with Ritachi estimating a $26 billion cost to construct the controversial missing link between the east and west branches of the Eglinton LRT.

"This figure may be an under or overestimate, and as such, a more realistic interpretation of this diagram may exclude the midtown corridor entirely. The rest of the lines are estimated at a somewhat above average but still a reasonable cost compared to costs of transit worldwide."

Ritachi acknowledges that "while we cannot continue to build extensive tunnels everywhere under the city, many LRT solutions are insufficient for the transit needs of people living in predominantly low-income communities that are already served by the 10-minute bus network. LRTs are cheap, and they look nice and are generally cool, I think that we should build them where they make sense."

Light rail is a proven solution for urban areas with medium-to-high densities, but they often aren't as well-suited to suburban locations. That's why Ritachi proposes a lighter-capacity version of bus rapid transit, or BRT.

"I believe the solution in the interim is to build BRT or 'BRT lite' with bus routes that have their own dedicated lanes and strong signal priority so that vehicles do not wait at red lights until a grade-separated rapid transit can be fully built."

"I also think that elevated rail transit can be a solution to the woes of extremely high construction costs for underground transit but with the same benefits."

Fantasy transit maps can be plenty of fun to peruse, but Ritachi hopes that the image will trigger discussion about infrastructure investment.

"I would like to encourage anyone reading to support faster and more convenient transit in their communities whenever possible by expressly showing support by contacting a city councillor or MPP."