Toronto is undergoing a flurry of transit expansion unlike anything witnessed in the city before, with three entirely new lines under construction along with extensions and upgrades of existing lines.

It's an exciting time for infrastructure enthusiasts in the city, including one high school student who took their lifelong love of transit to a new level, creating a detailed mock-up of what a TTC map could look like in 2035.

This young transportation cartographer named William (no last name provided) has created multiple concept and fantasy maps for GO Transit and the TTC over the years.

He tells blogTO that he likes "to take maps that already exist for those two agencies and expand them," saying that "it helps give a better understanding of the network when you can compare their official map to my map that I've expanded." 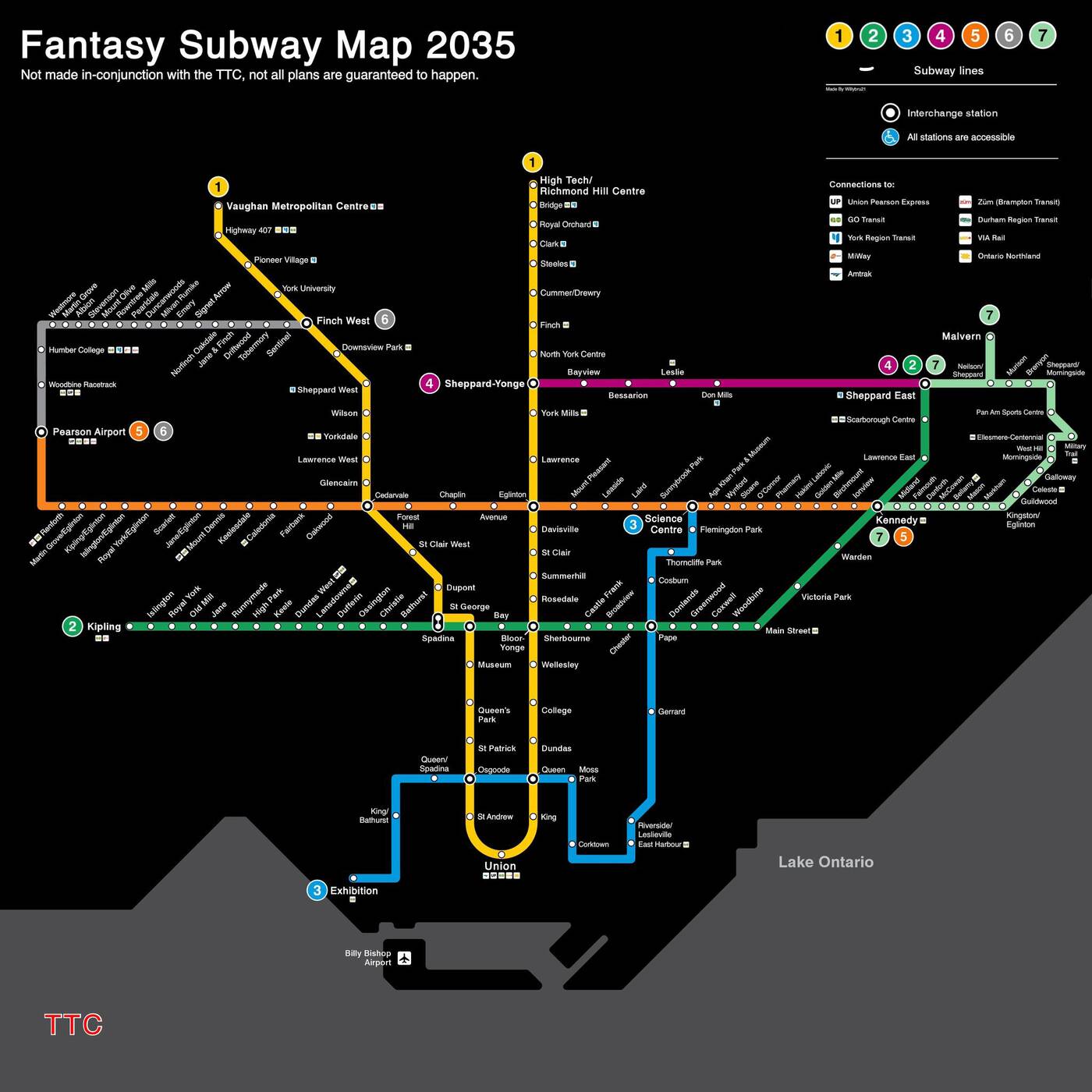 For his TTC 2035 map, William used a future map published by the TTC as a base image, extending it to reflect the fast-changing discussions and planning of how people will move around Toronto in the 2030s.

It’s what’s on the current TTC map, I was just pretty much copying this: pic.twitter.com/XDVTID5H8X

The creator of the work says he included "all the projects currently proposed or under construction for the TTC, as [a map] that's updated for 2022 doesn't exist."

It includes the long-delayed but nearly-complete Eglinton Crosstown LRT (future Line 5) and the Eglinton West extension just getting underway. The Line 6 Finch West LRT is another prominent addition, set to enter service in 2023, while new stations will be added to Line 1 for the Yonge North Subway Extension.

The Ontario Line is perhaps the most significant change to the current system, taking on the Line 3 numbering in this concept map as the Scarborough Subway Extension will replace the current Line 3 Scarborough RT.

It's not the first take on a 2030s transit map, but it's a unique vision of the TTC network that differs from other future maps, notably including the planned Eglinton East LRT as a separate route, Line 7, following the revelation that commuters will have to transfer at Kennedy, with no through-service planned.

Metrolinx and the TTC are still referring to the Eglinton East extension as Line 5, so this Line 7 designation may never become a reality.

Another key change from previous future maps is the linking of Lines 5 and 6 at Pearson Airport, which is envisioned as part of a proposed multimodal transit hub that the Greater Toronto Airport Authority is boldly touting as a "Union Station West."

"My TTC map was so simple to do," he says, adding that the entire map "only took two days" to produce. "The software I use is actually an app on my phone called YouDoodle+, it's fairly easy to use, and it gets good results."

While the TTC map was simple enough to make, William invested much more time to work on a detailed map of GO Transit, including not just future projects but also unbuilt routes proposed during the last 55 years. 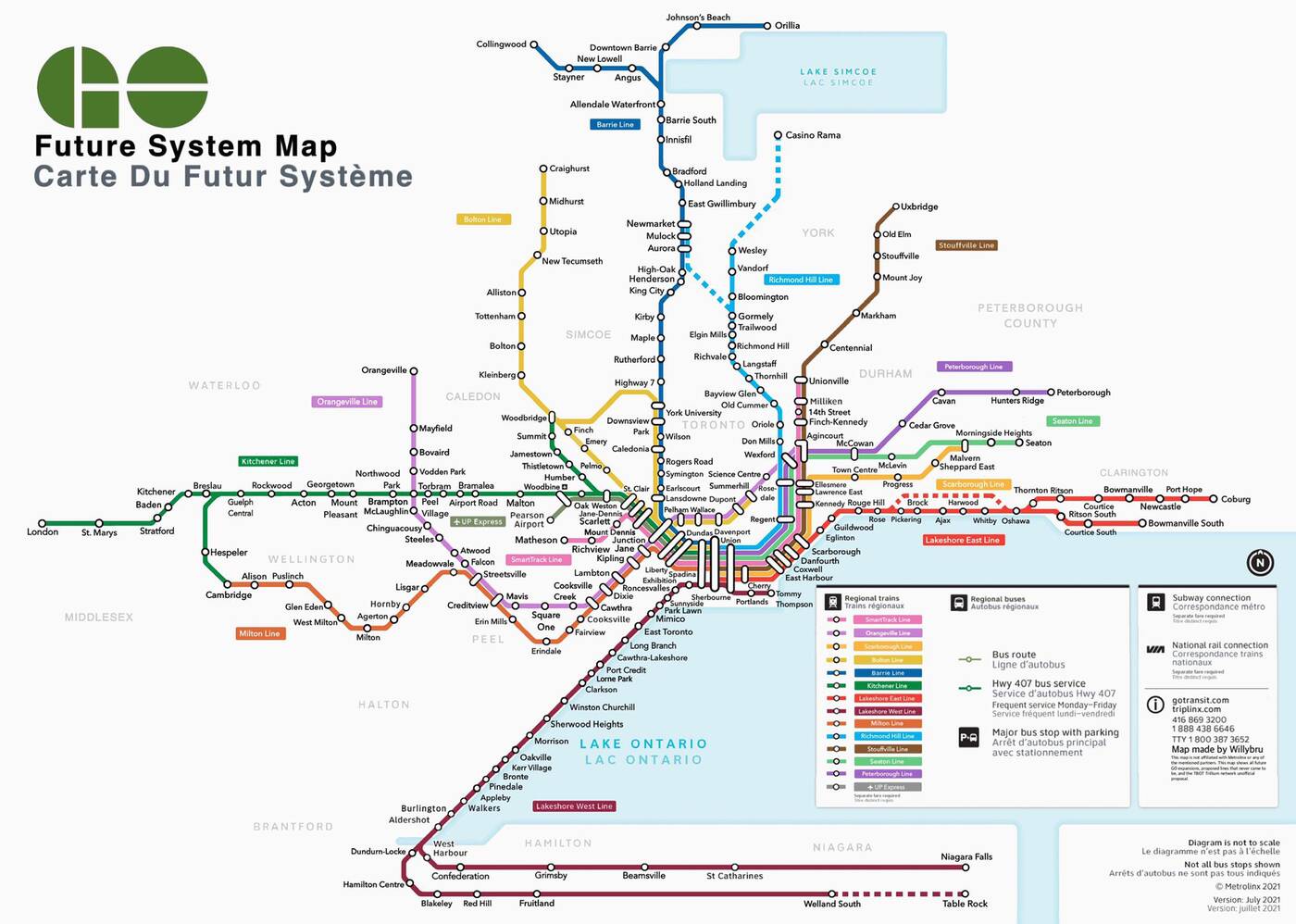 With much more research involved, building out the GO map took William a month and a half.

Transit plans come and go in Toronto, and it's likely that several more concept transit maps will emerge in the years to come as further changes are made to the future of the TTC network.