The former Runnymede Theatre existed as a vaudeville theatre, bingo hall, and later a Famous Players movie theatre until 1999, when Chapters purchased the building and converted it to what was easily the nicest-looking bookstore in the city at the time.

Chapters pulled out in 2014, and Shoppers took over the space in 2015, adding its own minor touches to the previous restoration and renovation led by Chapters-Indigo and the property owners.

Retail was a somewhat undignified path for the theatre's restoration, but it gave the old Runny new life and a new way for the next generation of people to enjoy it. 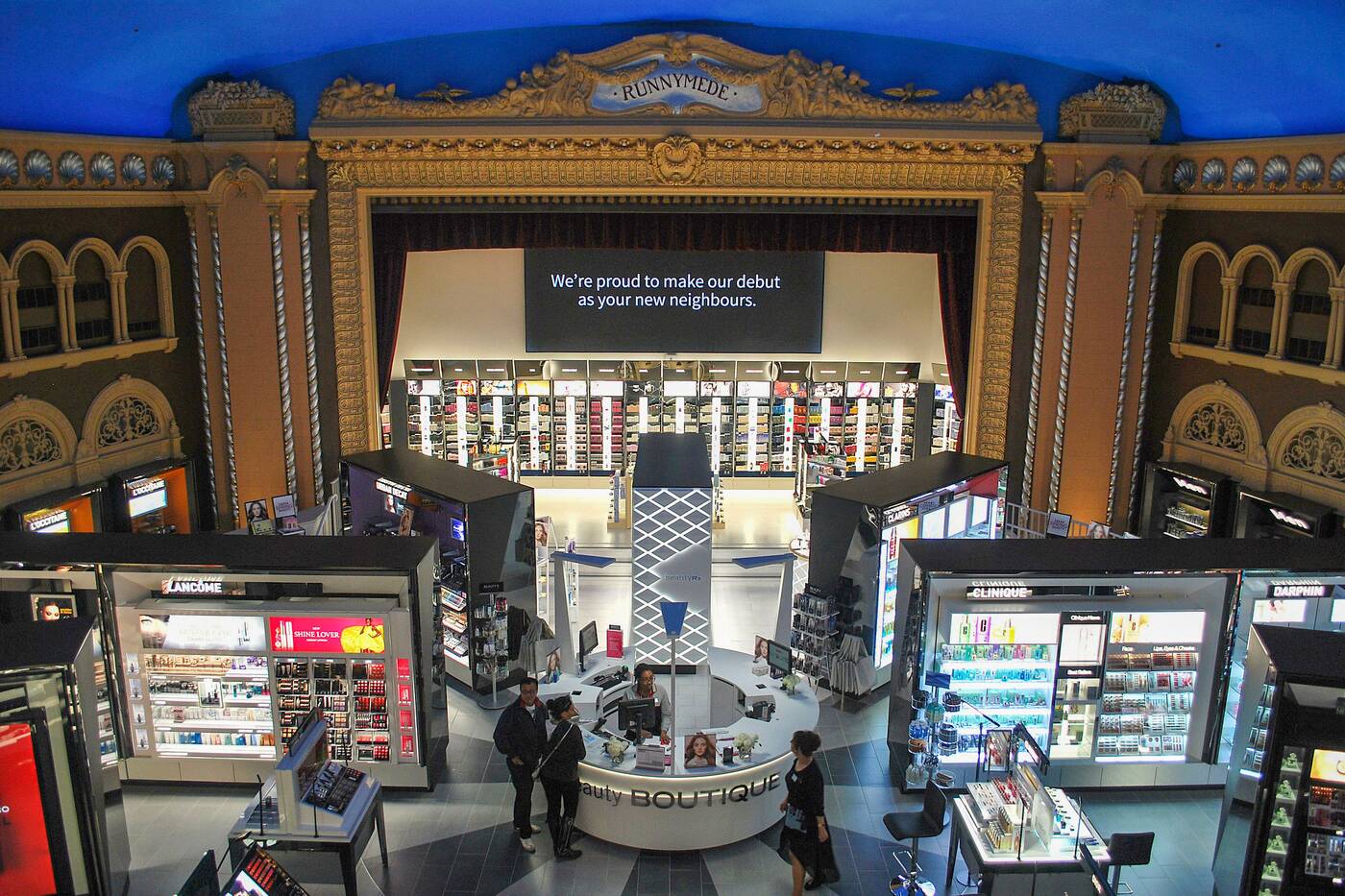 It no longer houses 1,400 seats and hosts rowdy shows as it did upon opening in 1927, but the Runny still lives on, with its restored painted sky ceiling and ornate finishes making shoppers feel like they're in an open-air courtyard as they browse beauty supplies and protein bars. 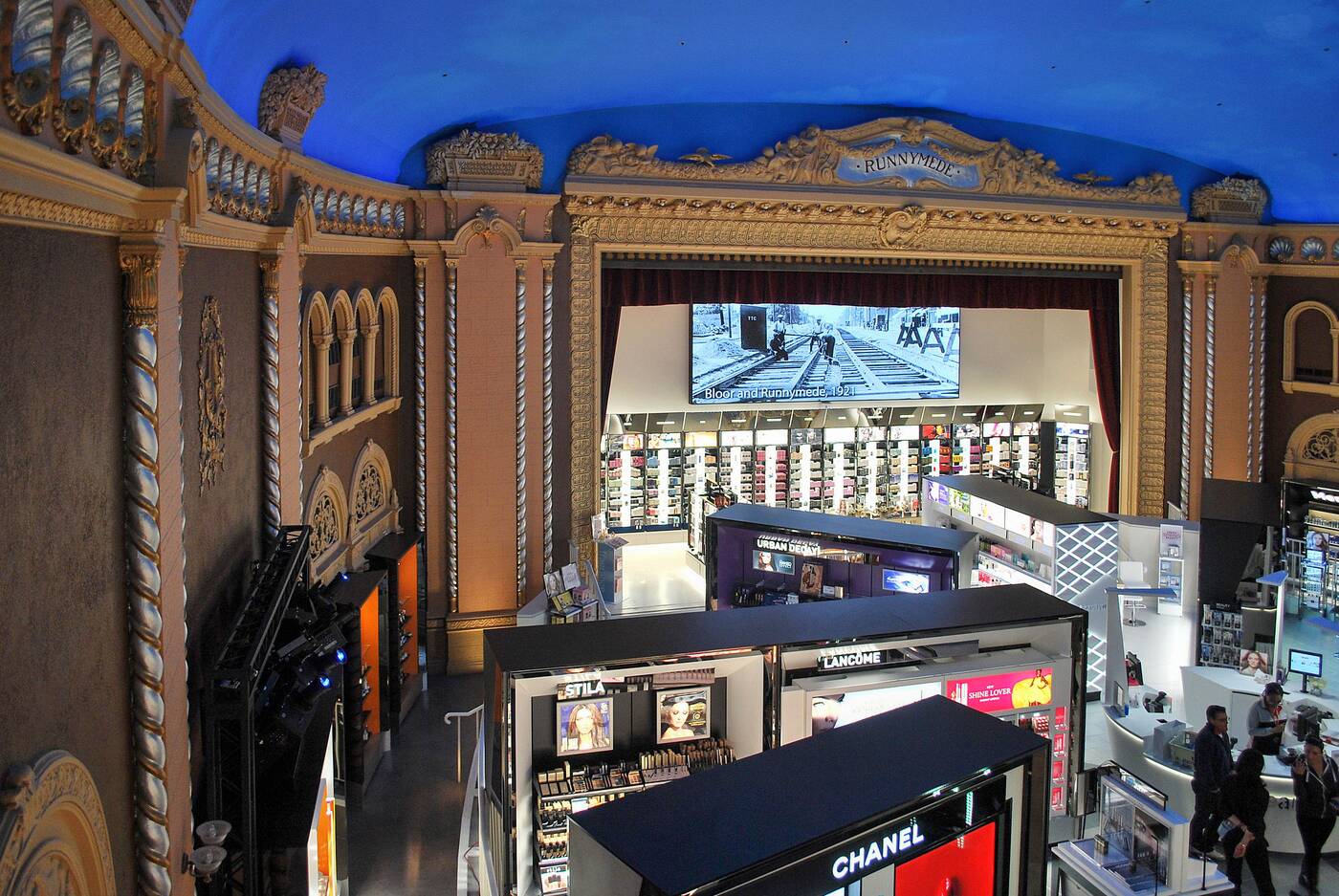 But if customers dare pull out a phone or camera to enjoy the space for later consumption, they are quickly shown the door.

A quick search of the Shoppers Drug Mart Bloor West Village location reveals plenty of negative reviews from unsatisfied customers, but many share a common theme involving awe-stricken patrons learning that photography is forbidden after snapping pics of the interior.

So apparently according the the @ShopprsDrugMart at 2223 Bloor St Toronto security and staff, did you know at no point and time you can take a picture of anything in this store or any shoppers store?

news to me.. kinda strange too.. good luck enforcing that if true. #funfact pic.twitter.com/6yq3EXd4r5

Visitors to the store at 2223 Bloor St W. are greeted by a sign indicating that photography is prohibited, and store reviews indicate that this rule is being enforced.

One review mentioned claims that a customer "went into this shoppers to get a health care product. I was in awe of the theatre, it looked so beautiful so I tried to take a picture of it."

"I was immediately told by a beauty boutique staff member that pictures aren't allowed. This is ridiculous, the theatre and layout is beautiful, why wouldn't I take a picture?! Plus if I were to post it on social media, it could make more people come to the store thereby increasing business. The no picture policy needs to be updated."

Another reviewer says they had a "horrible experience" at the location when they took family members inside to show them around. "Wanted to take a picture of historic cinema. Was yelled at by staff. Wouldn't spend a dollar at this store. Very poor customer service."

A private business is well within its right to forbid photography on its premises as a condition of entry, and it's really not uncommon for stores to clamp down on unwanted shutterbugs, especially with competitors known to employ corporate spies.

But when building a retail experience around a historic landmark with obvious aesthetic appeal, it begs the question; should corporations be making exceptions to such policies? Should they not be celebrating such an asset?

blogTO reached out to the Bloor West Village Shoppers Drug Mart for an explanation of the no photography policy, though the store manager was unwilling to comment, instead suggesting the question be directed to Shoppers' head office.

Shoppers has since confirmed to blogTO that "Shoppers Drug Mart locations are private property and do reserve the right to request that no photos be taken."