10 Toronto buildings that used to be movie theatres

Toronto used to have a lot of movie theatres. "The Nabes," as neighbourhood cinemas were known during the boom years of the 1940s, were essentially multipurpose community centres; part entertainment venue, part meeting place, part communal TV set. Later, as the public began to shy away from the silver screen, numerous Toronto movie houses fell on hard times. Many closed for good while the architecture lived on.

The first movie ever screened in Toronto was The Kiss. It was shown in 1890 in the basement of Robinson's Musee, a Yonge Street curiosity emporium similar to the famous P. T. Barnum oddity museum in New York. The film, recorded by the Edison Company, starred Broadway actors May Irwin and John Rice and consisted of a single scene from the popular farce The Widow Jones. For about 17 seconds, Irwin and Rice nuzzle and kiss in choppy black and white.

Toronto's movie scene peaked in the middle decades of the 20th century, when there was practically a theatre on every block. Yonge Street was particularly densely populated with movie houses. For an immersive look at Toronto's cinema scene, check out Silent Toronto, a treasure trove of stories about lost theatres, film censorship, and bawdy tales of steamy burlesque shows. Many of the dates and details included below were sourced from Eric Veillette's excellent site.

Here are 10 Toronto buildings that used to be movie theatres.

The Big Nickel (The Rio,) 373 Yonge Street
Looking at archival photos, it's hard to recognize what was once a 500-seat movie house based on its current appearance. Now a run-down adult movie store, the Rio, as it was popularly known, opened as the Big Nickel in 1913 and was the Yonge Street strip's longest running cinema. By the 1970s, however, the rot had begun to set in, and customers reported watching movies on a ripped screen under a collapsing ceiling. It closed permanently in 1991. 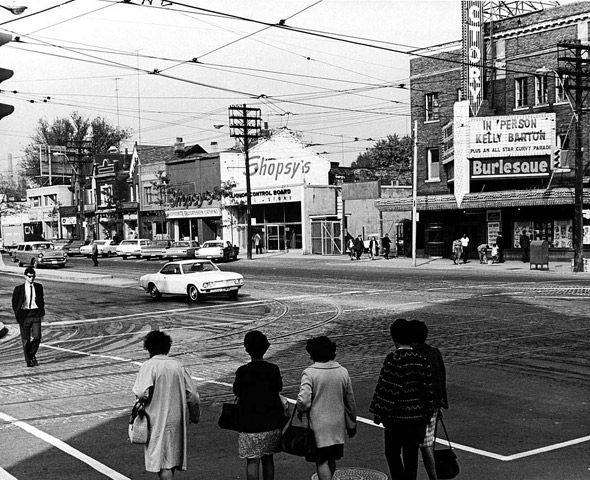 The Standard (Victory Burlesque,) 287 Spadina Avenue
The brick building on the northeast corner of Dundas and Spadina is now (mostly) a branch of RBC, but in the 1960s it was a raunchy burlesque joint. It opened in 1921 as the popular Yiddish theatre the Standard, and was later known as the Strand and the Victory. Post-war, it became a mecca for raunchy burlesque performances by Tura Santana, Busty Boswell, and Satan's Angel. The building last saw movie action as Chinese theatre, Golden Harvest. 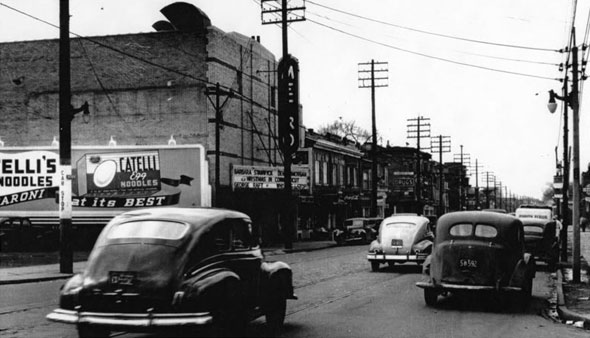 Metro Theatre, 677 Bloor Street West
News that the sticky and thoroughly run down Metro Theatre on Bloor St. W. was finally giving up the ghost didn't come as much of a surprise. Despite an attempt to become an indie film hub in 2012, the cinema closed earlier this year to make way for a fitness studio. The Metro Theatre opened in 1939 and nearby burned down on just its second day. In its heyday it was known for its comfort: soft seats, air conditioning, and ample parking. 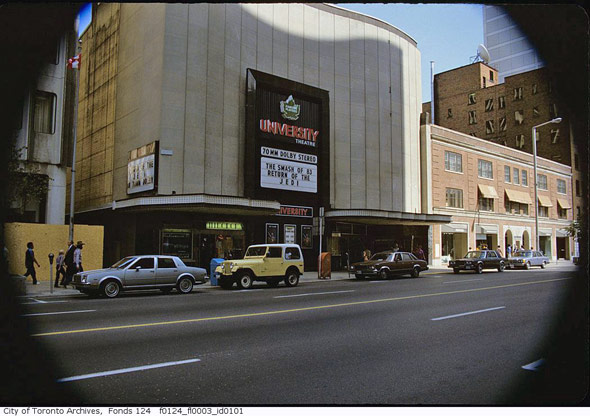 University Theatre, 100 Bloor Street West
University Theatre, so named for its proximity to the University of Toronto, opened in 1949 with a screening of Joan of Arc, starring Ingrid Bergman. Today, it's a Pottery Barn, but the building's wonderfully curved exterior survives. The rest of the building was knocked down in the 1980s, despite an earnest preservation battle. 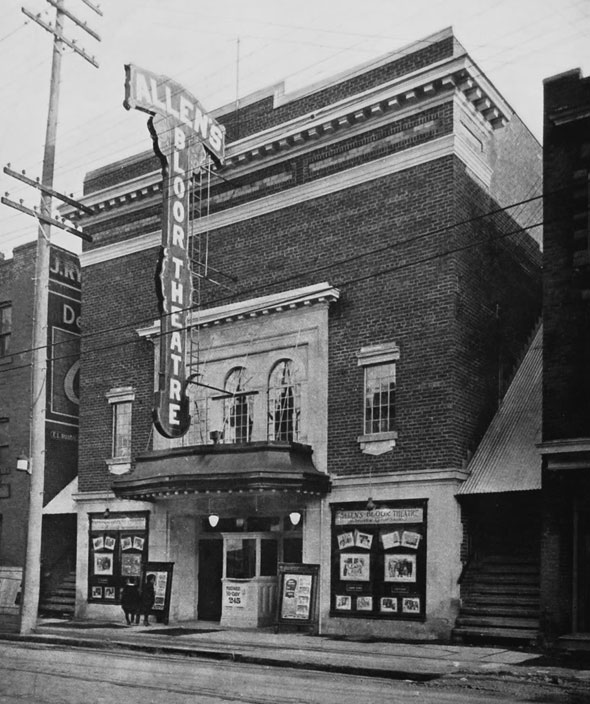 Allen's Bloor Theatre (Lee's Palace,) 529 Bloor Street West
One of a cluster of movie houses around Bloor and Bathurst, the Bloor Theatre was opened in 1919 as part of the Allen chain of cinemas. As Silent Toronto notes, the theatre was one of the smallest in the company's roster (it has half the typical number of seats) before it was bought by Famous Players and closed in 1957. It has been Lee's Palace since 1985. 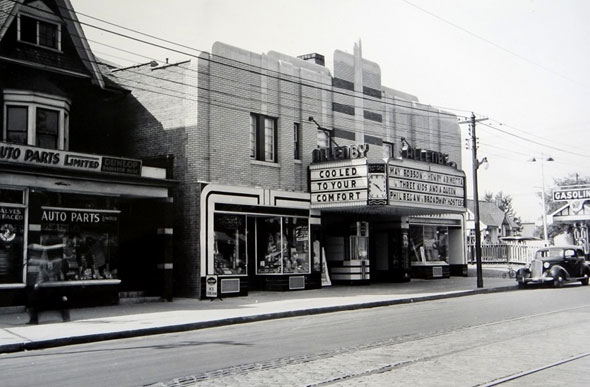 The Apply Allenby, 1215 Danforth Avenue
It's hard to imagine a fate worse than becoming a gas station kiosk, but that's what happened to the Allenby at Danforth and Greenwood in 2011. Opened in 1936, the building doubled as a community meeting space; it showed newsreels during the second world war and hosted bible lectures on Sunday, according to Heritage Toronto. The theatre was later the Apollo and the Roxy. Today, the marquee and the Danforth facade has been restored, but the sign reads "Tim Hortons & On The Run." 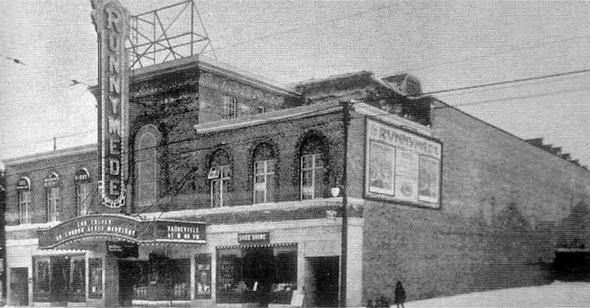 The Runnymede, 2225 Bloor Street West
The Runnymede Theatre had pedigree. It was designed by Alfred Chapman, the architect responsible for the original ROM building and the Palais Royale at Sunnywide, who had a massive mural of the night sky painted on the ceiling of the main auditorium. Little electric bulbs twinkled among the painted stars. In its early days "The Runny" mixed live vaudeville stage shows and "talkie" pictures before switching to bingo in the 1970s. Briefly a Chapters, the building is due to re-open as--quelle horreur--a Shoppers Drug Mart. 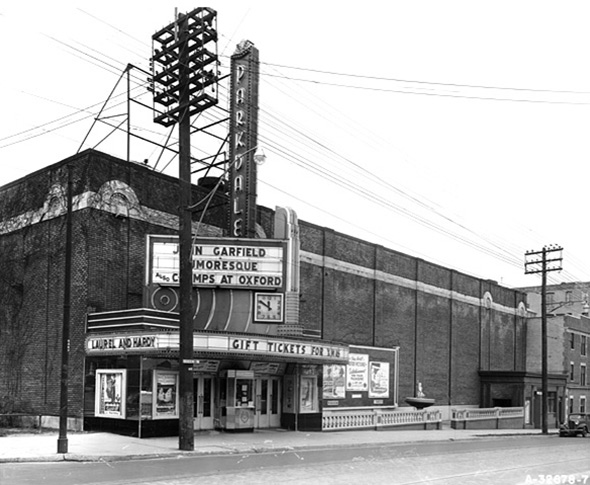 The Parkdale, 1605 Queen Street West
Another surviving member of the Allen family of cinemas, the Parkdale opened in 1920, advertised as "Toronto's latest super suburban theatre." The most striking thing about the old Parkdale is its weird orientation to the street. Unlike most theatres, the building lies broadside to Queen, its auditorium parallel to the street. In its halcyon days as a cinema, the Parkdale was known for being particularly popular with rowdy teenagers. It closed in 1970 and has been an antiques market ever since. 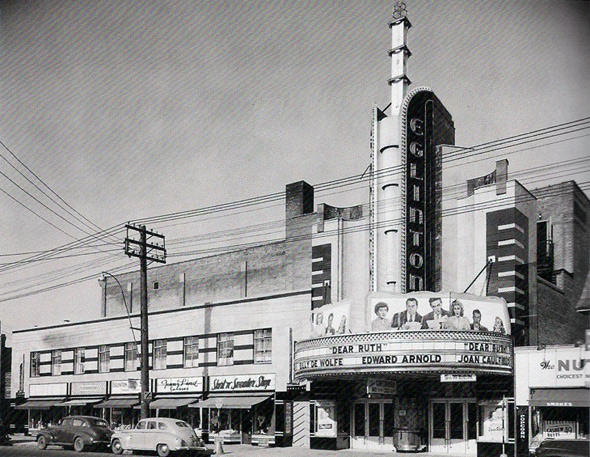 The Eglinton, 400 Eglinton Avenue West
It's impossible to miss the glorious art deco marquee of the old Eglinton theatre just west of Avenue Rd. Thanks to its repurposing as an event space, the brilliant signage still lights up at night as it did on opening night in 1932. Like the Parkdale, the Eglinton is orientated with its side to the street, though the effect is different thanks to the presence of a few small stores. These days the former "Show Palace of Toronto," which closed in 2002, promises things like the Richmond Hill P.S. prom. 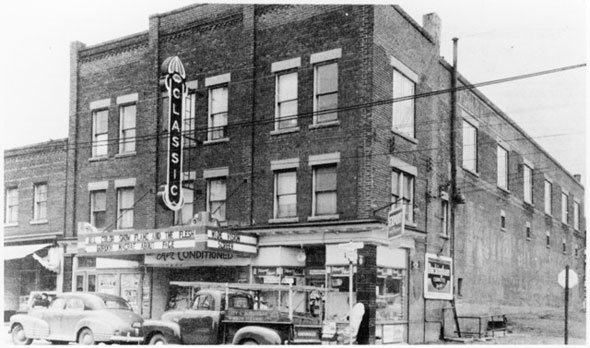 Classic Theatre, 1300 Gerrard Street East
The old Classic Theatre at Gerrard and Greenwood still makes nods to its history as a movie theatre, though the silver screen is long gone. The building, which now operates as a circus academy, includes a little cinema-themed cafe and the exterior still looks like the kind of place one could catch a show. As the faded paint on the exterior says, the building spent time as a pool and billiards parlour before taking on its current tenants.