Here's what it's like inside Toronto's famous abandoned Lower Bay station

Tens of thousands of commuters pass through Bay subway station on the Line 2 Bloor-Danforth on any given weekday, some of them completely unaware that another subway platform lies abandoned just metres below their feet.

Many may be unfamiliar with this abandoned subway station, but it's far from a secret, known by the wider public as "Lower Bay" while officially known among TTC operators and staff as "Bay Lower."

Whatever people choose to call it, the abandoned platforms simply say Bay-Yorkville (unless they're standing in as another city's subway for a film shoot), as the duplicate station was originally an active platform working in tandem with the still-operating infrastructure above.

Bay station — both upper and lower — entered service in February 1966 as part of the then-new Bloor–Danforth line. 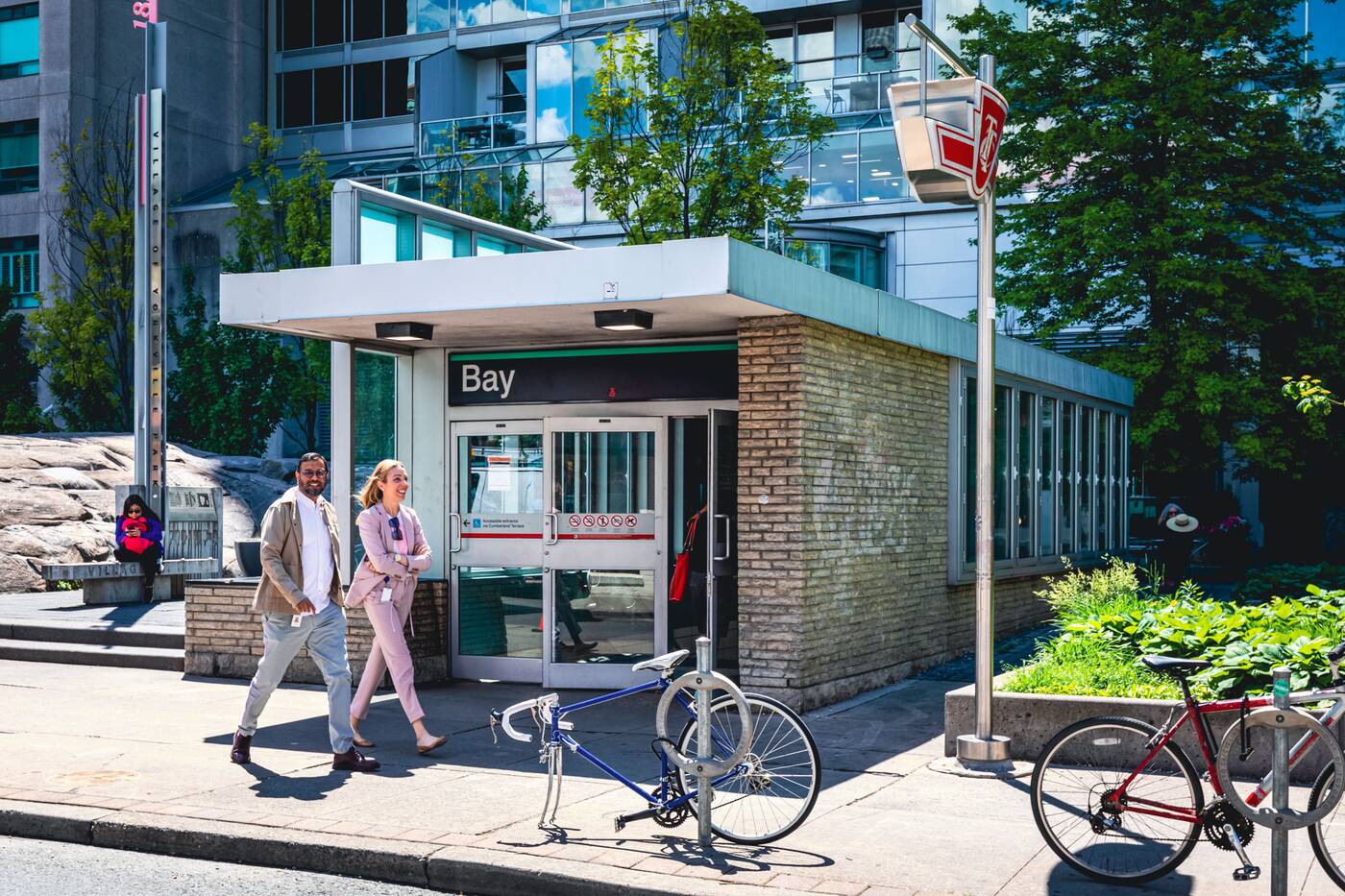 But for its first six months of operation, you could get anywhere on the TTC's (then comparatively small) subway network, part of an ill-fated experiment to interline the two subway lines into a confusing hybrid route known as the Yonge–University–Danforth route. 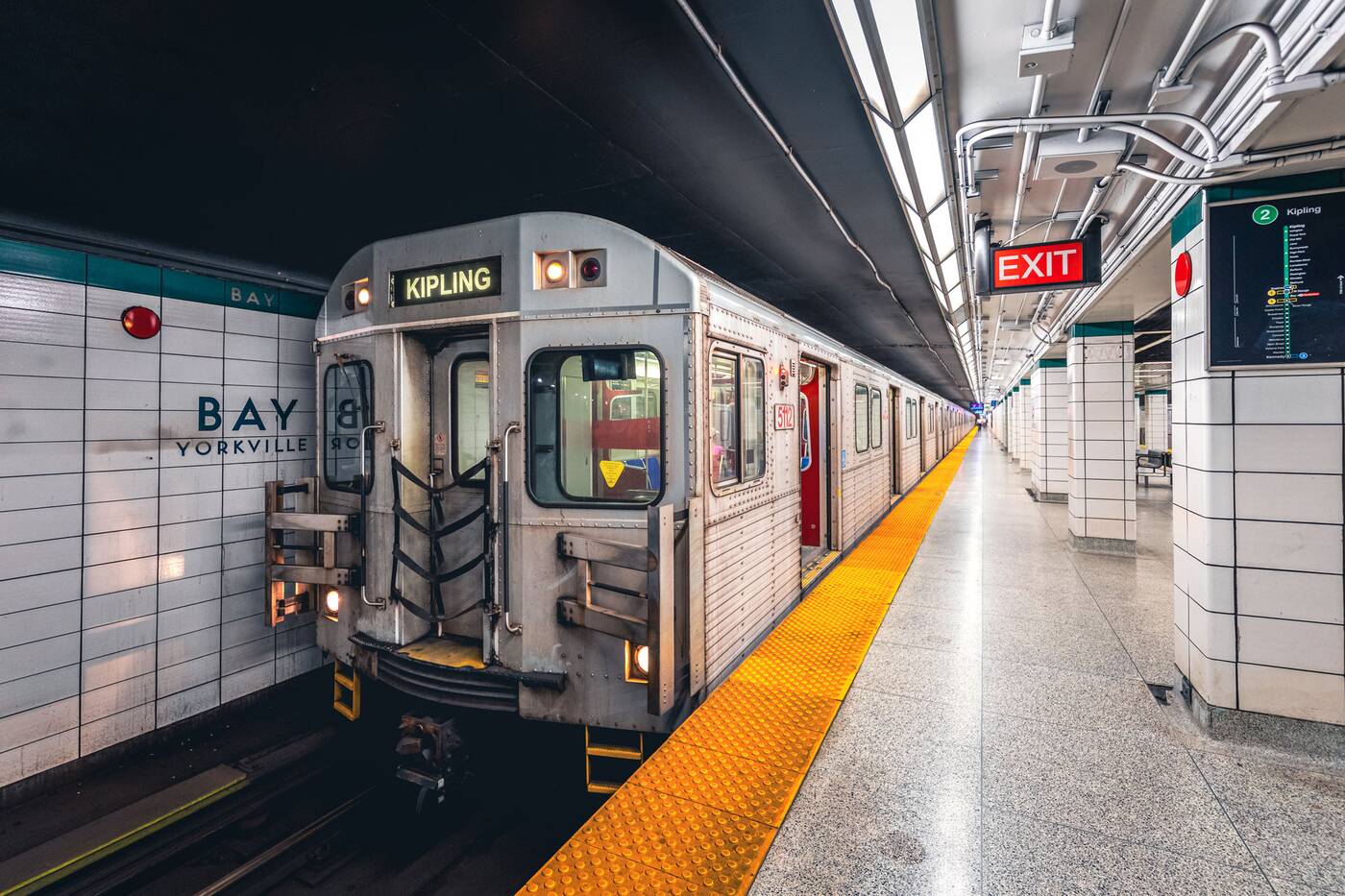 Between February and September 1966, Bay subway station had two platform levels, four sets of tracks, and three routes. Today it has two platforms occupying one level serving a single route.

Its layout and design are not unlike St. George station, which entered Yonge-University service in 1963 and opened a lower level with interlined service three years later, on the same day as Lower Bay. 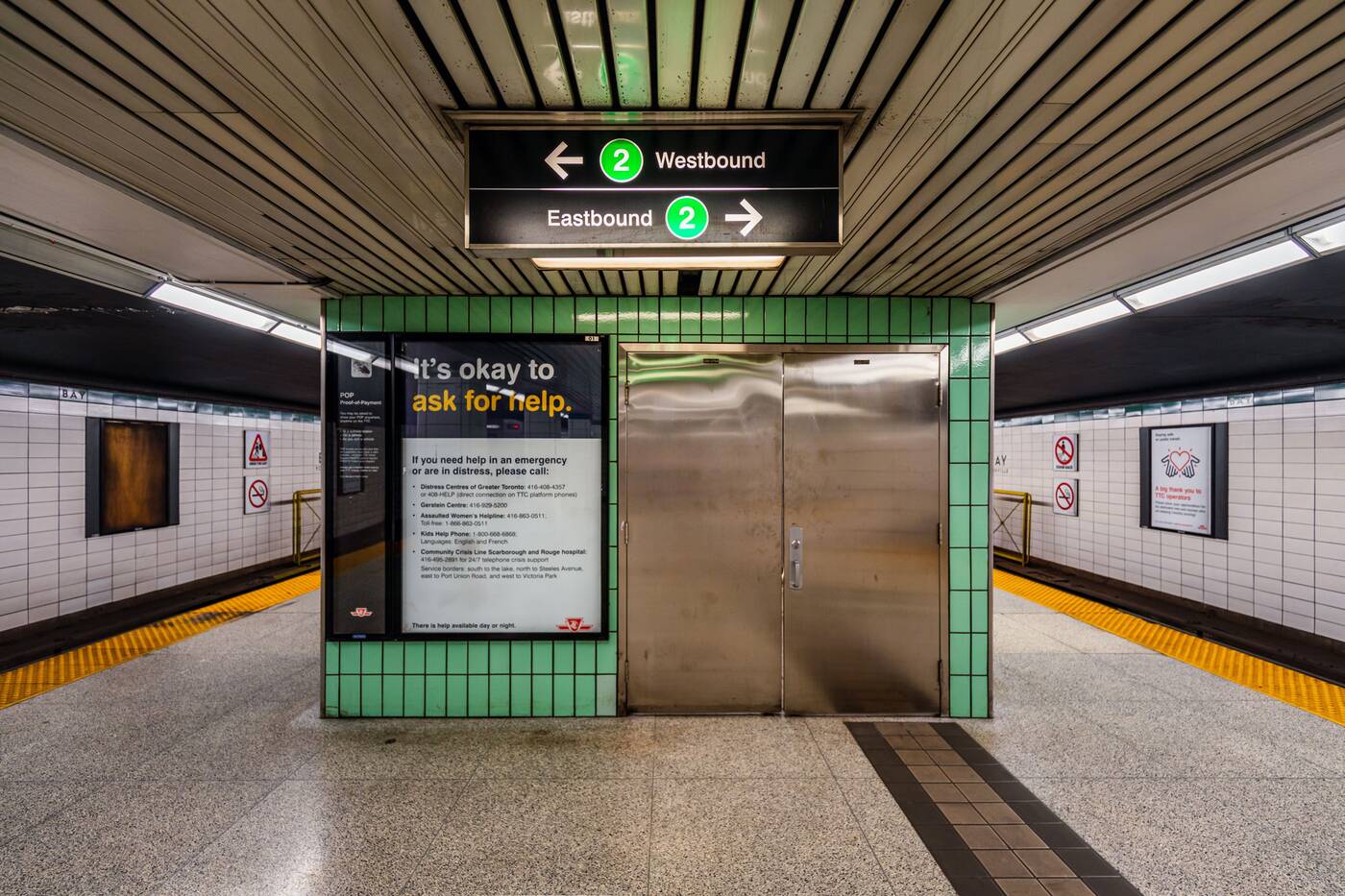 Two sets of unassuming steel doors walled in by turquoise tile are the only remnant visible to commuters.

This interlined experiment was quickly determined to be a mistake and ended in September 1966.

Just six months of use proved that independent lines were the best way to efficiently move commuters. As trains on the interlined routes alternated between levels, passengers had no idea where to board causing bottlenecks on stairs, and single-point delays were cascading across the entire subway network. 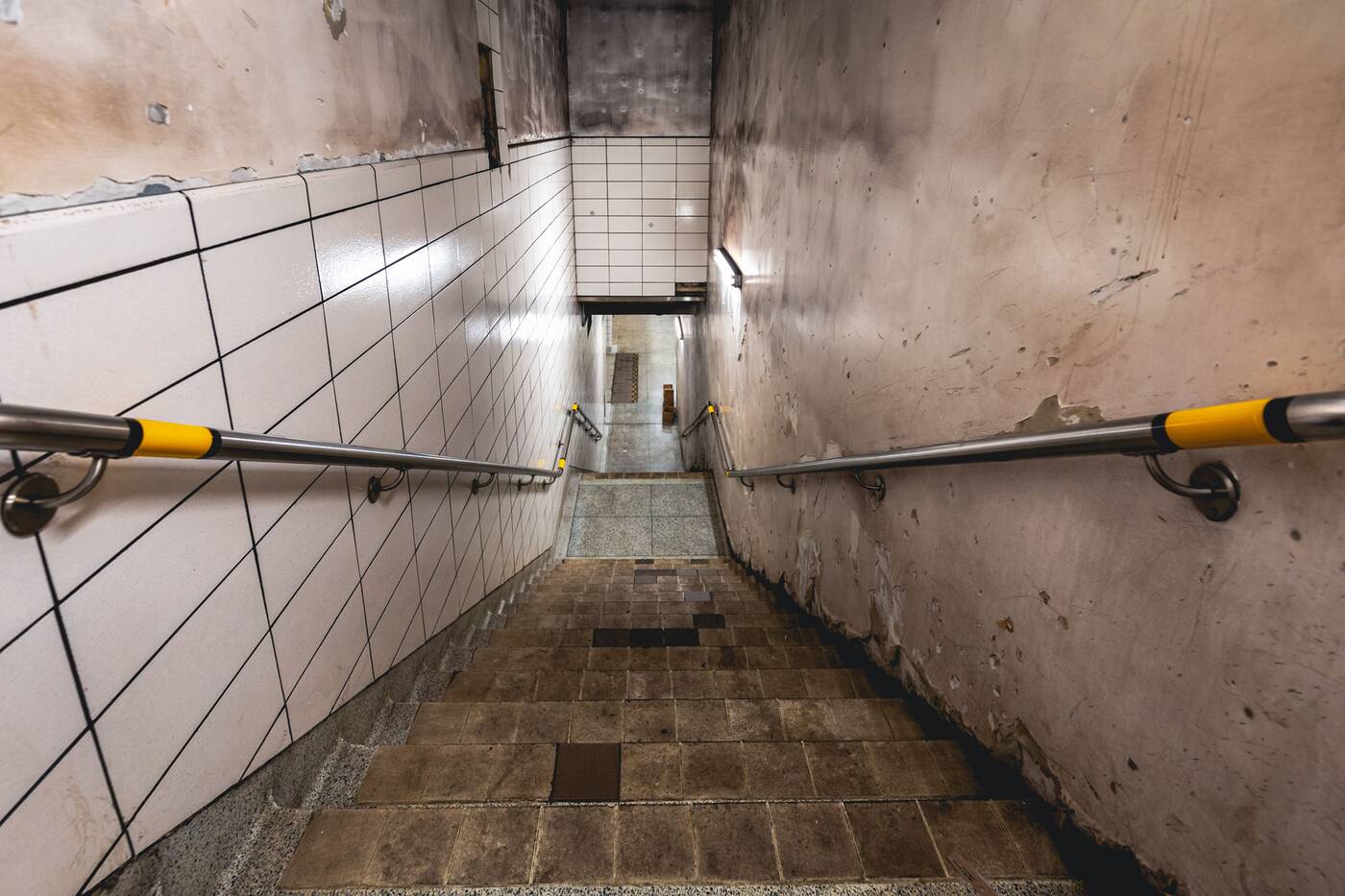 Behind the metal doors, stairs lead down to the disused lower-level.

The multi-level designs of St. George and Bloor-Yonge remain useful to this day, but the end of the interlining experiment rendered Lower Bay useless to subway service overnight. The lower portion of the station was subsequently mothballed. 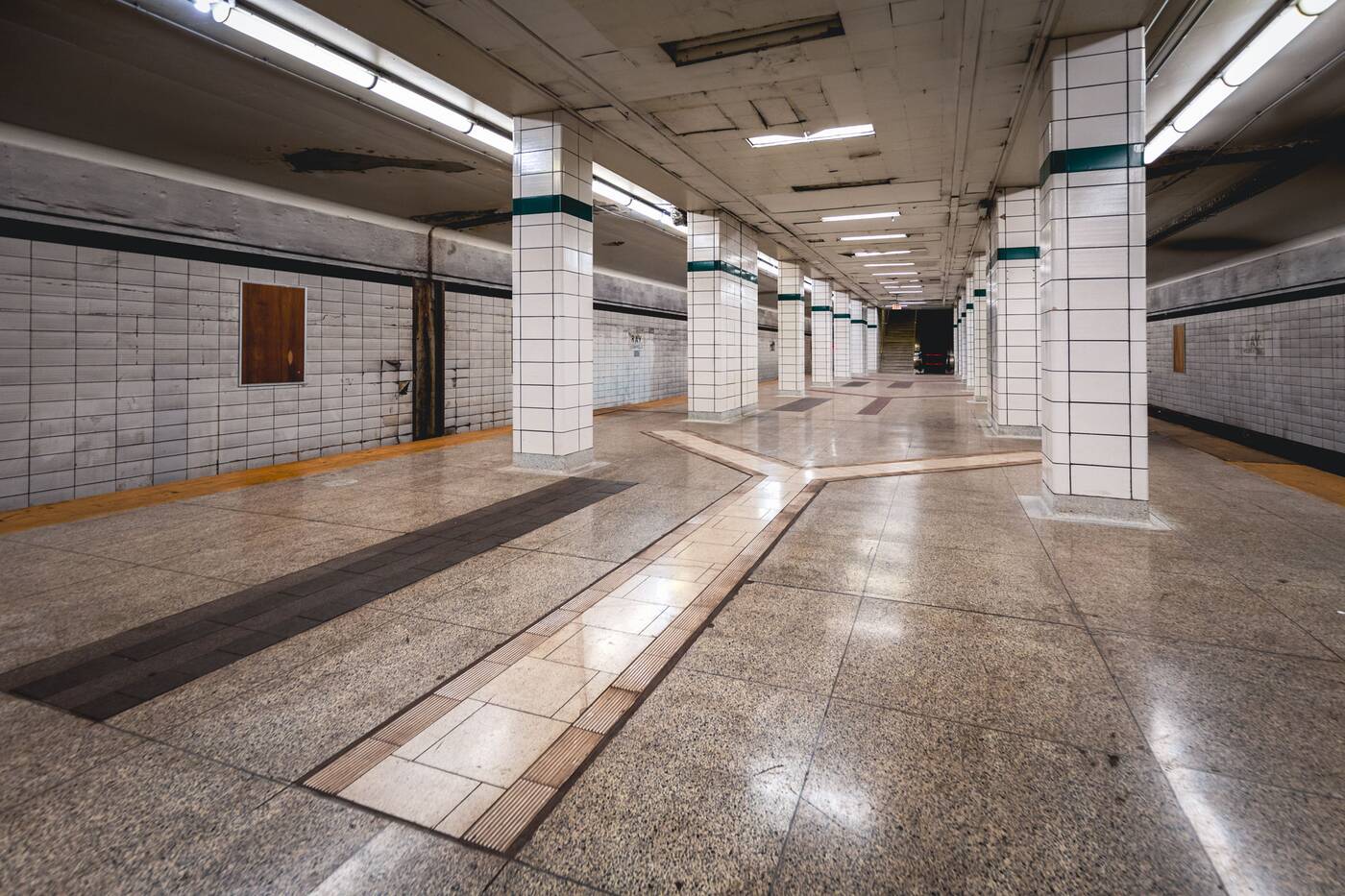 Y-shaped designs on the floor are absent on the active platform level above.

It may have lost its intended purpose, but Toronto's only "ghost" subway station is by no means useless. 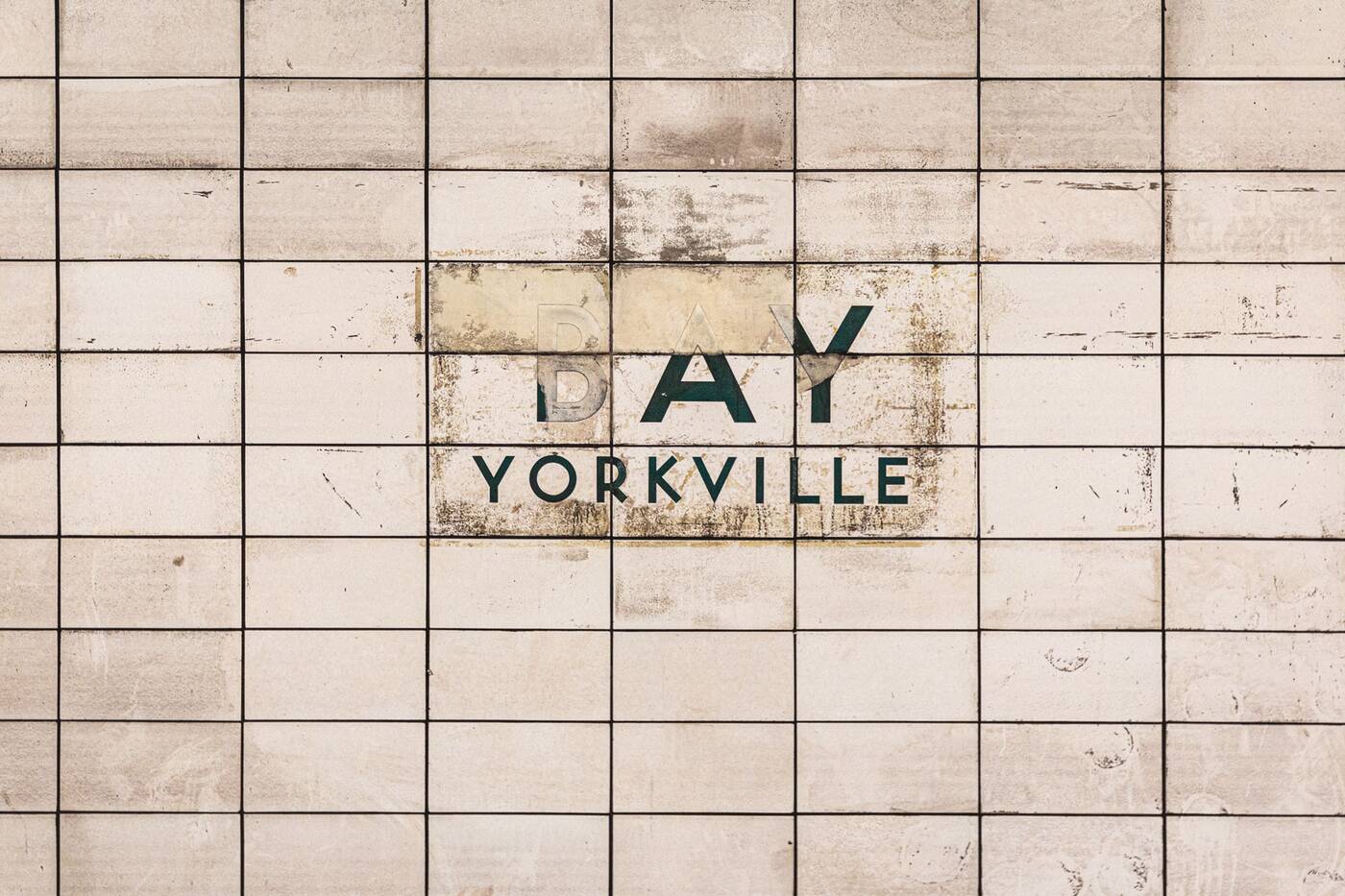 Faded signage with adhesive residue from past film productions hiding the station name.

The preserved but out-of-service platforms serve as a great training space for new subway drivers and are regularly used to transfer subway trains between Line 1 and Line 2 tracks. 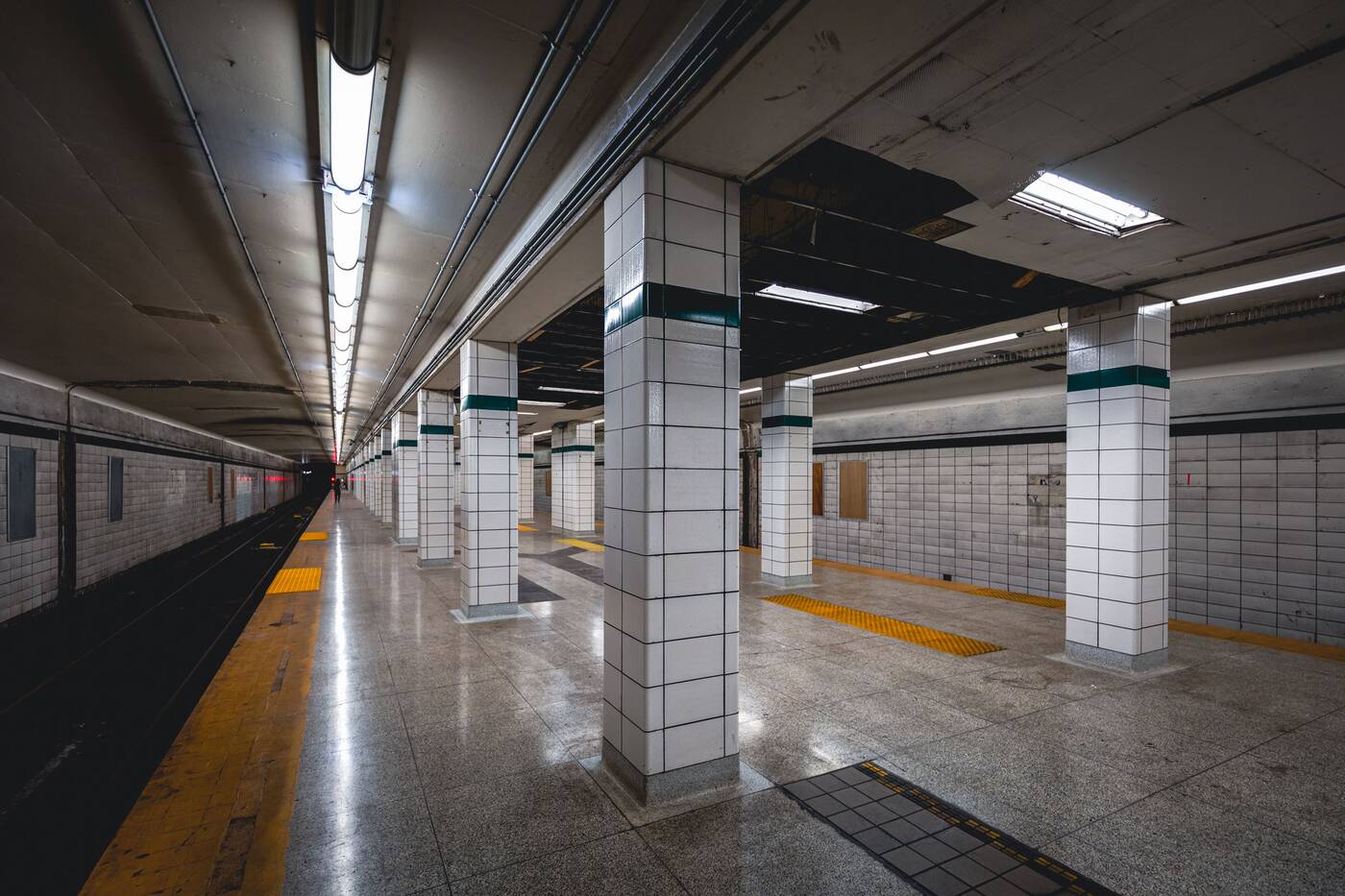 Creepy ambiance is part of what draws urban explorers/trespassers to this space.

It's also the perfect staging ground for military exercises and other simulations that would otherwise require closures and cause havoc on the TTC, and allows the transit agency to test out new technology. 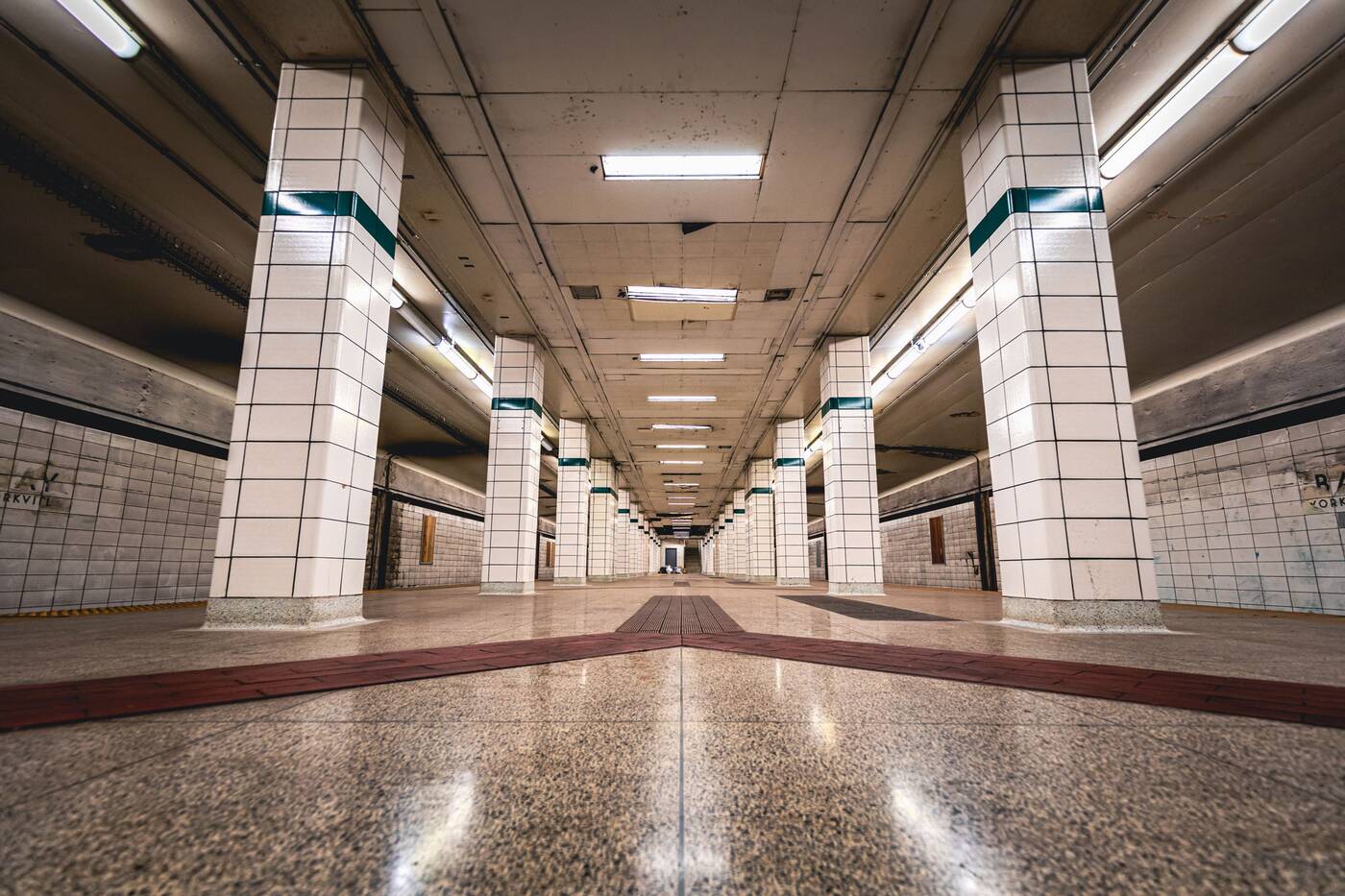 For just six months in 1966, these floors were packed with subway commuters.

Those textured yellow platform warning strips now found in every subway station were first tested in Lower Bay, which is also the only place on the TTC network you can still find the old-style tile platform edges. 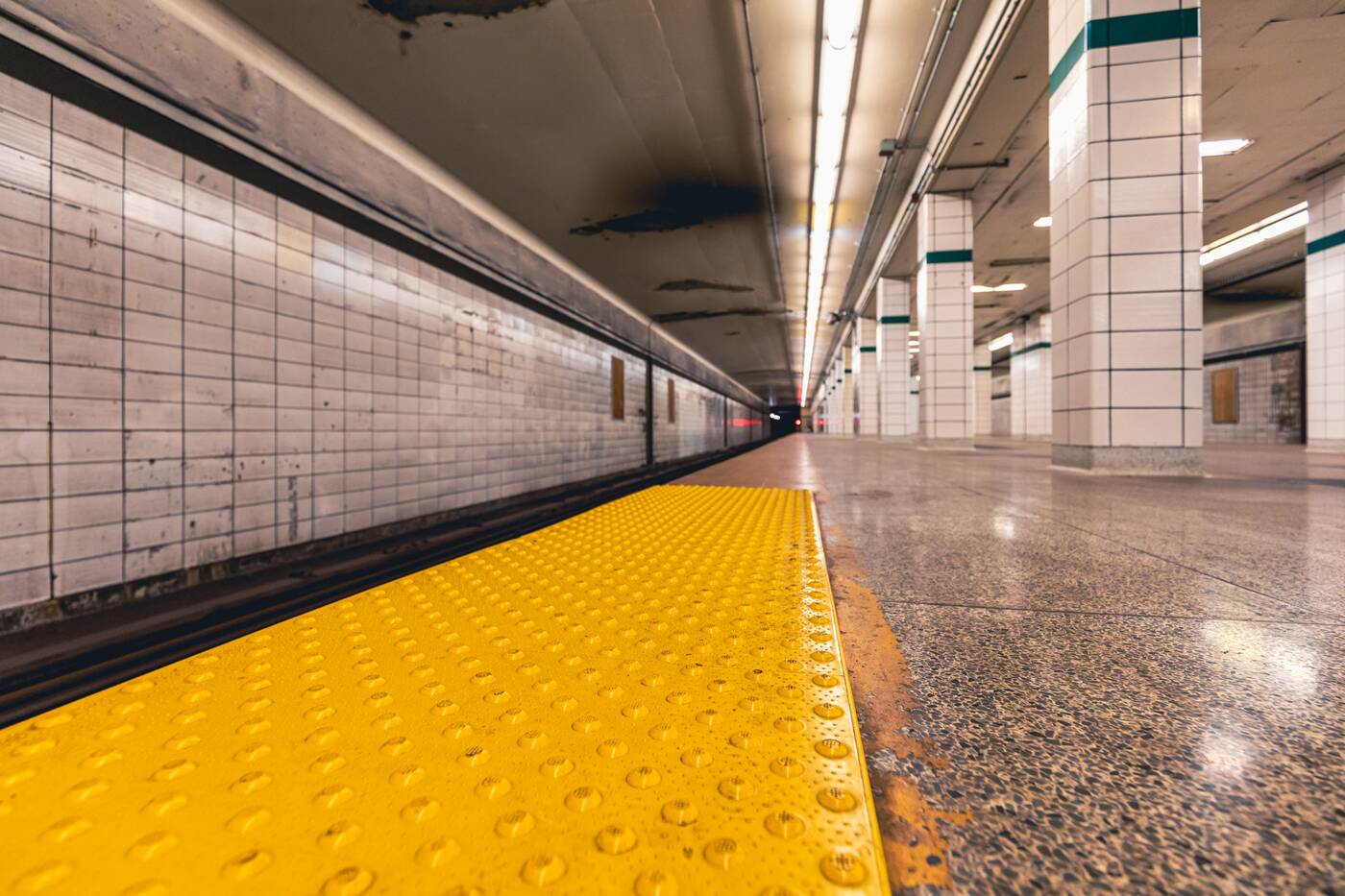 The station has taken on a holy grail status with urban explorers, but an unsanctioned visit to the station is an illegal and very dangerous venture, as the only access (without a key and a tour guide) is a harrowing route through active subway tunnels via Museum station. 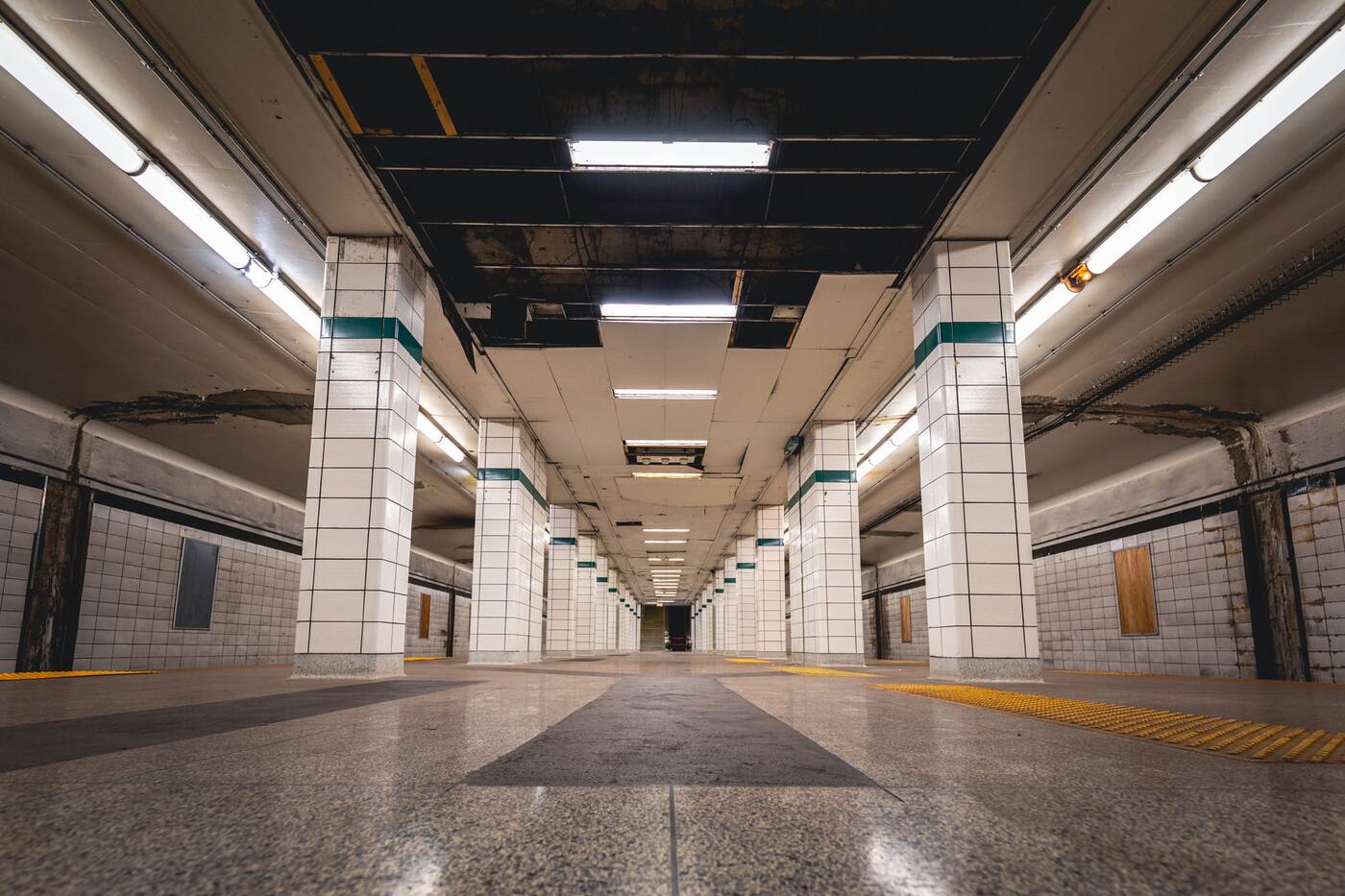 Wear and tear throughout the station is partially attributed to the constant vibration of trains passing above.

And if you aren't injured or killed along the way, you will absolutely be spotted by cameras, caught by authorities and charged with trespassing.

Seriously, don't do this. 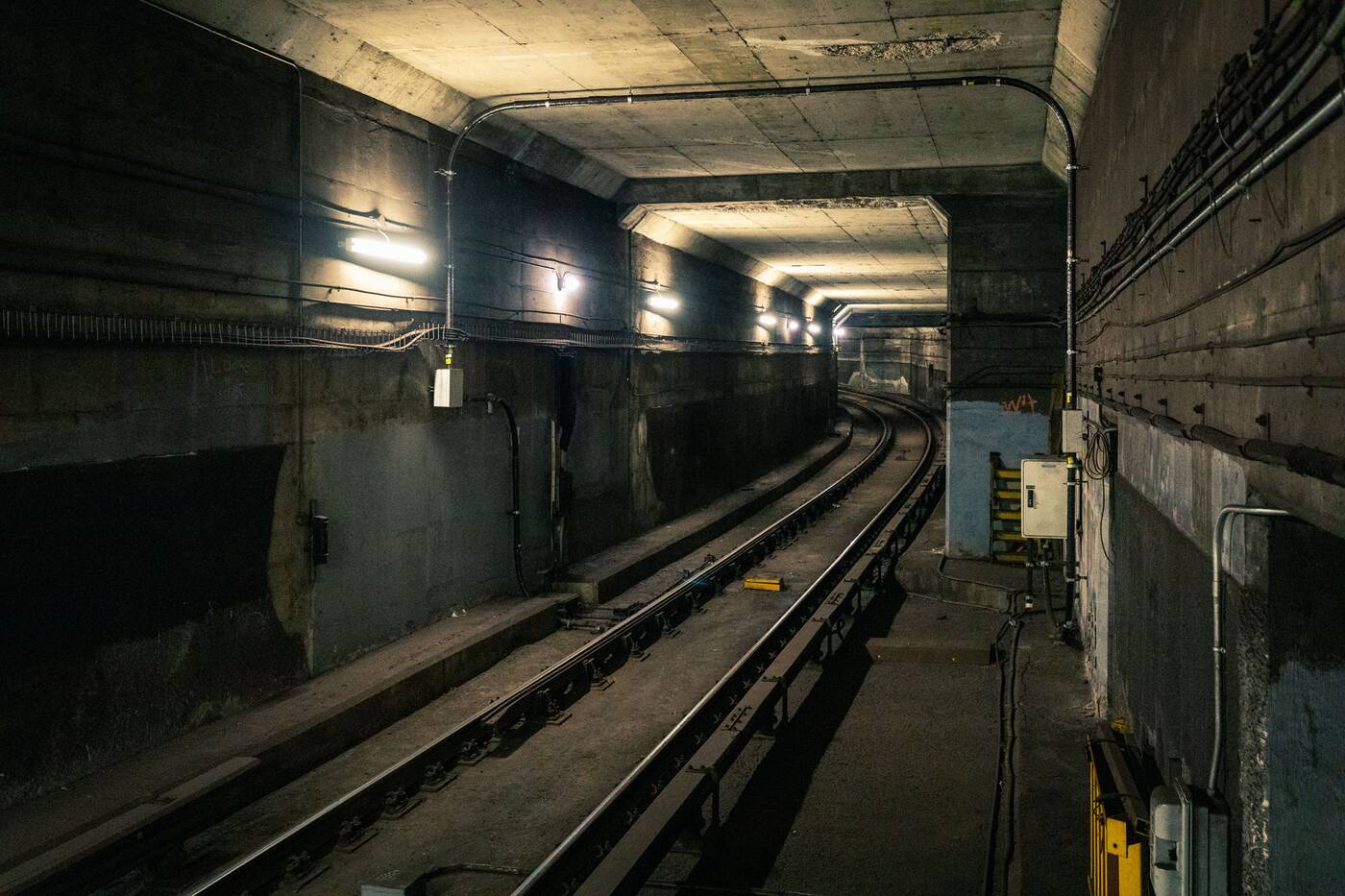 The tunnel connection from Museum station is the preferred path of trespassers, who are promptly caught by TTC security.

If you really want to visit, you'll have to line up with the masses during the annual Doors Open Toronto festivities, where the abandoned station is a regularly featured destination. 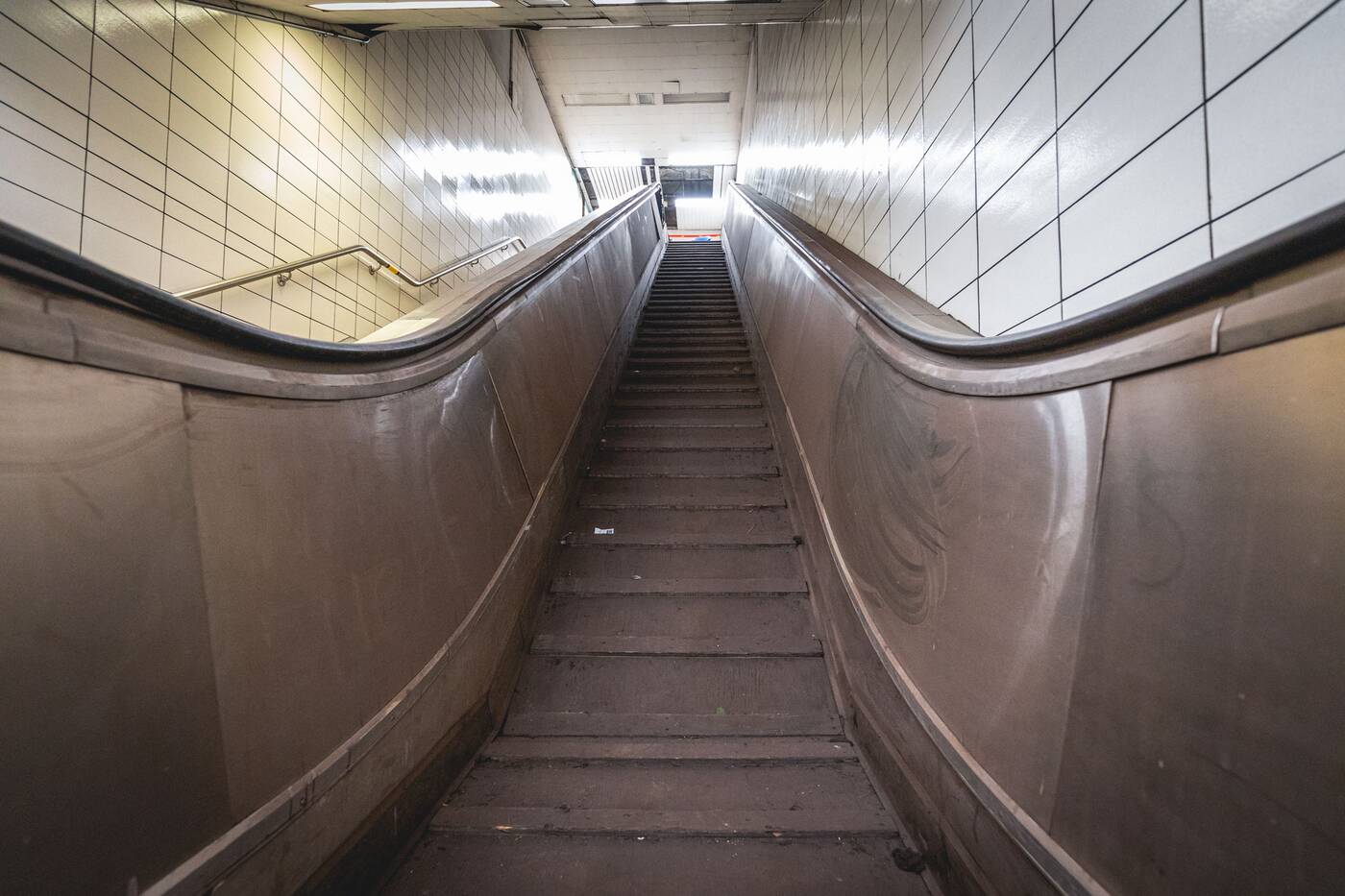 This escalator could use some love after decades of disuse.

Or you could just consume some media for a closer look, as the station has been used in countless television and film productions as a stand-in for various metro systems around the world. 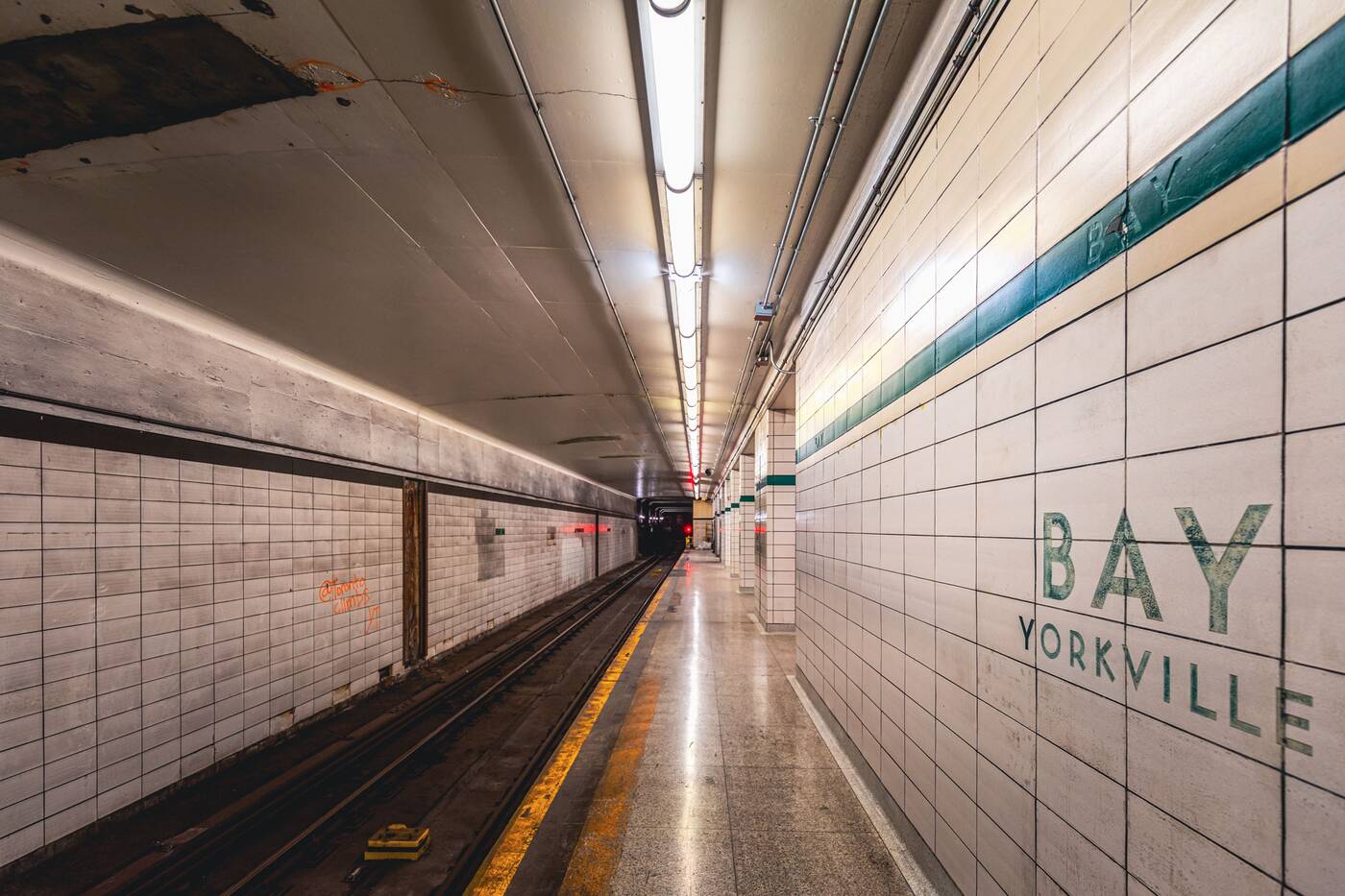 Trespassing and graffiti are frequent issues, and the station's tile walls bear scrub marks where previous vandalism was cleaned.

Lower Bay has undergone several modifications over the years for the sake of film productions. On multiple occasions it has been converted into an elaborate mock-up of a New York City subway station, including for the 2001 psychological thriller Don't Say A Word (RIP Brittany Murphy) and to a lesser degree for the 2009 action remake The Taking of Pelham 123 (RIP John Travolta's career).

Many may know the station from more recent appearances in media, most notably a music video shoot for The Weeknd and Future back in 2017.

Remnants of the old New York City subway set are still visible if you look carefully, including sections of faux tile mosaic finishes designed to mimic the style of station walls found in the Big Apple. 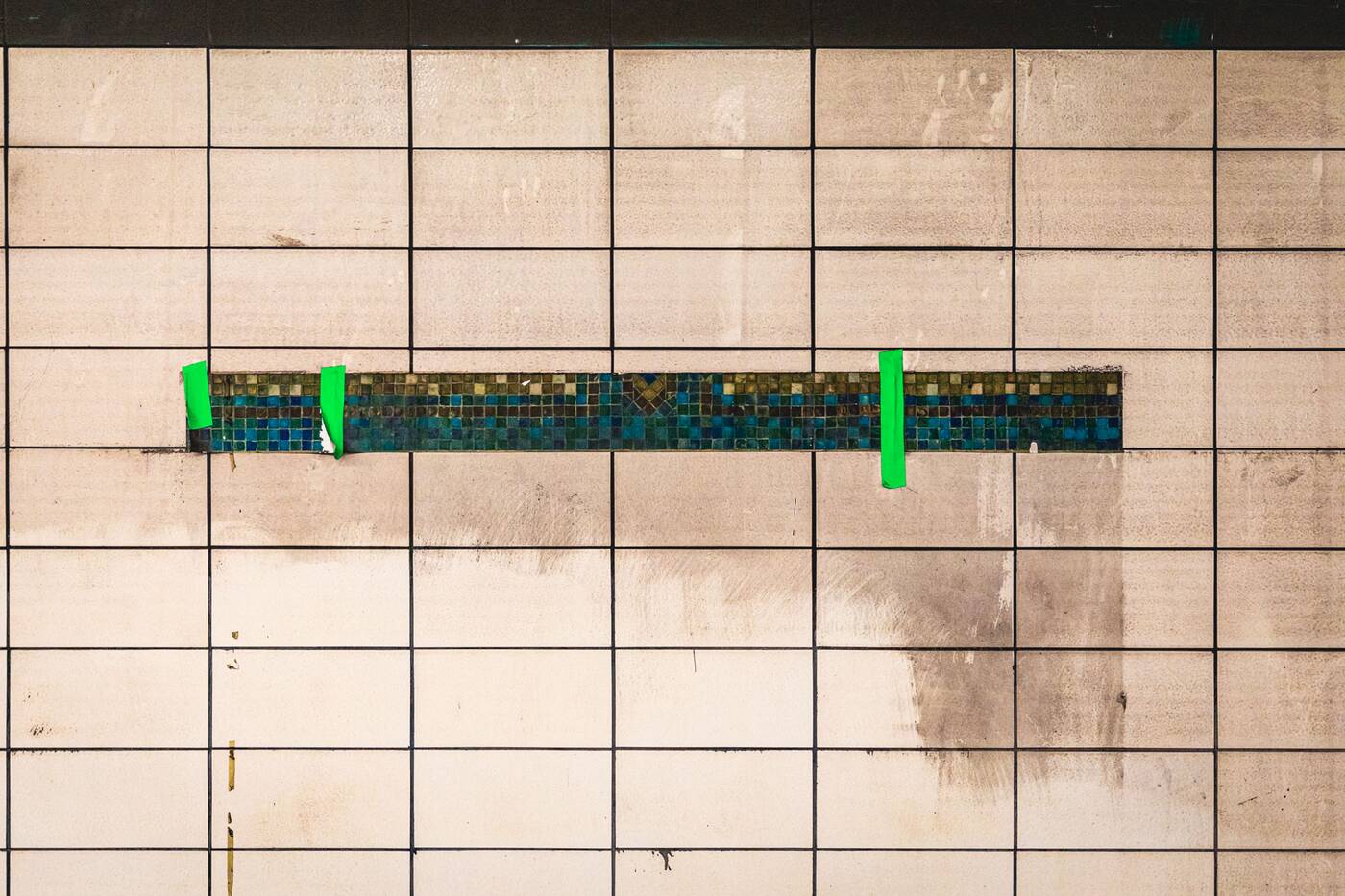 Mosaic tile patterns like this are something you won't find at any other TTC station.

There is also some interesting local lore tied to the mothballed station, which is reportedly haunted by a spectre known as the "lady in red."

As the name would suggest, this ghostly figure appears to TTC workers wearing a red dress, and our guide through the abandoned station claims that many crews refuse to work the tunnels along this stretch. 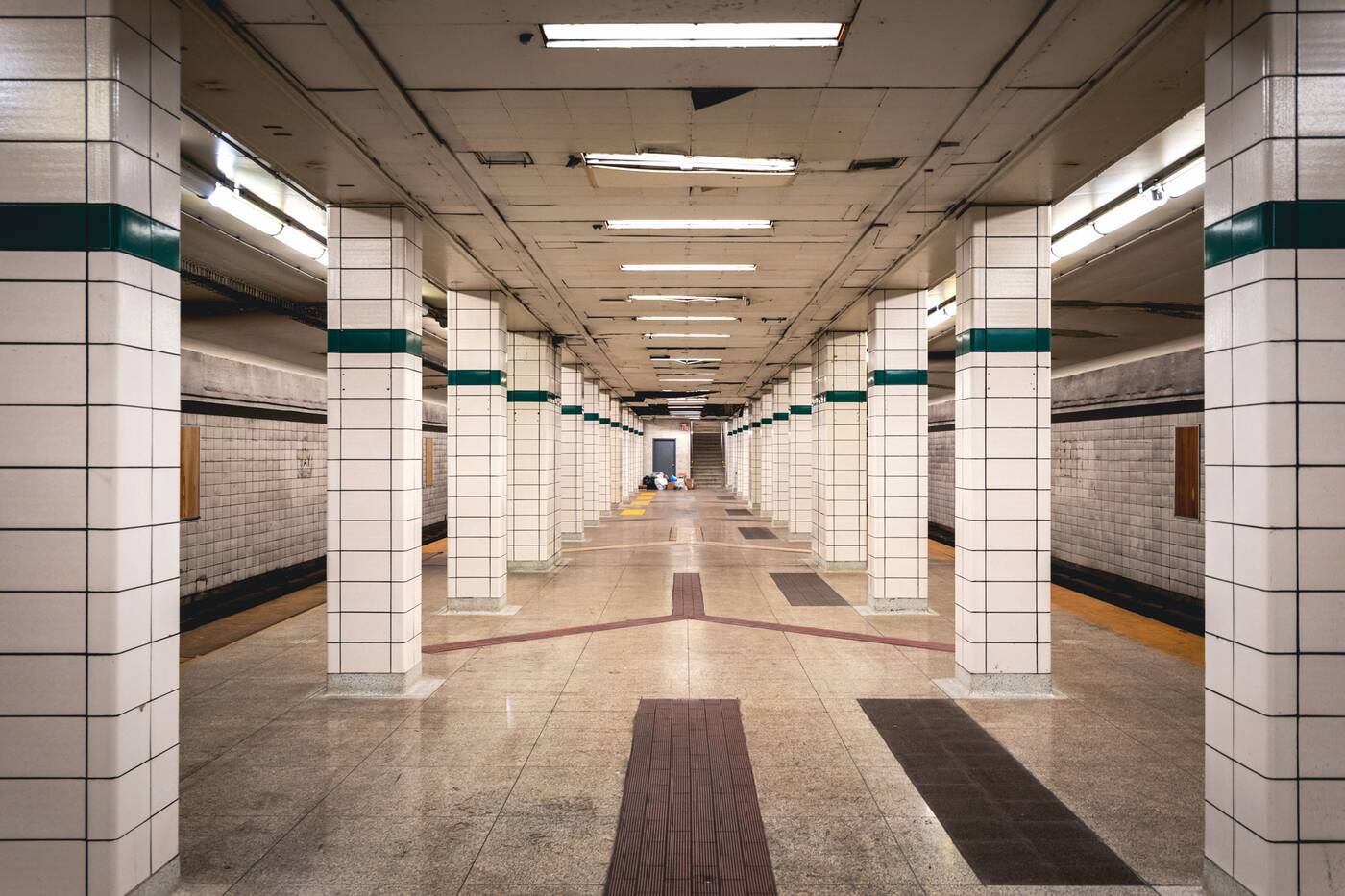 I'm not saying I believe in ghosts, but knowing the legends, it gave us all a good creep out when a videographer's camera froze mid-shot as we explored the seemingly empty platform.

The station's state of decay certainly adds to the creepy vibe, making Lower Bay feel like a "Stranger Things"-style upside-down version of the busy station above.

It may be Toronto's only ghost station, but there is actually another two-level station with a ghostly platform in the city, and you can easily check this one out any time the subway is open.

The relatively new Line 4 Sheppard was built with a unique three-platform station at Sheppard-Yonge. The eastbound platforms are active, but a central platform remains roughed in and devoid of finishes, patiently awaiting the day when people actually use the Sheppard line.