The ghosts of Toronto

The ghosts of Toronto aren't too hard to find if you believe in that sort of thing. While many Toronto landmarks have an intriguing history and beautiful architecture, there's also quite a bit of murder, mayhem, and gruesome stories attached to them, which, of course, leads to legends of ghosts and hauntings. Here, you'll find a list of some of the most "ghost-friendly" places in Toronto. Those feeling exceptionally brave, may want to consider paying a few of them a visit this Halloween. 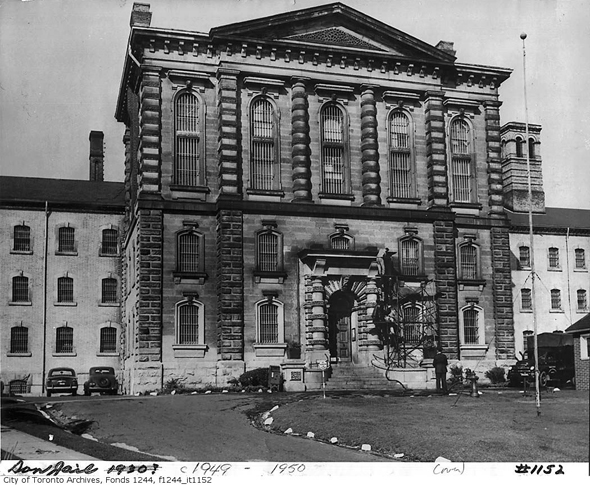 This well-known former lock up opened in 1864, and housed criminals until its closure in 1977. The conditions at the jail were inhumane, and quasi-public hangings were common place in the yard before they were later moved inside. In all, 34 people were executed at the jail, and, in 2007 human remains were found on-site during an archeological survey.

Given this information, it comes as no surprise that the jail that once housed convicts now allegedly houses the tormented spirit of a female prisoner who committed suicide. The story claims a blonde-haired woman hanged herself in one of the microscopic cells in 1890, and her rather unfriendly ghost haunts the building to this day. The last two men to be sentenced to capital punishment in Toronto — Robert Turpin and Arthur Lucas — also are rumored to haunt the site. 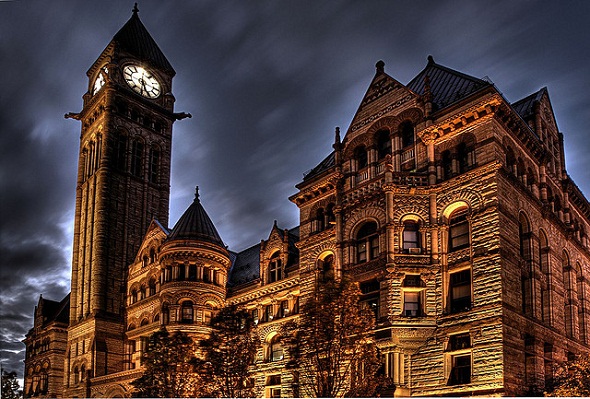 According to other reports (which perhaps draw into question this whole ghostly enterprise), those same two ghosts also haunt Courtroom 33 in Old City Hall, where they were charged and sentenced to hang. This courtroom is considered to be one of the most haunted areas in the city. In the book Haunted Toronto there's a story of two reporters who attempted to spend the night in Courtroom 33 but, terrified, threw in the towel at 4 a.m.

Turpin and Lucas aren't the only two whose spirits are still lingering around, however: the rear staircase is known for eerie footsteps when no one is approaching and invisible hands tugging at judges robes. The cellars used to be a holding cell for prisoners, and some people claim them can still hear their moans echoing and reverberating through the building. 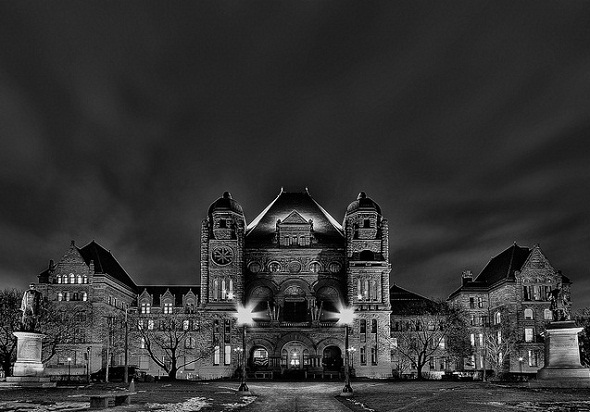 Here's another highly haunted political building and not just by the sometimes ghoulish politicians that work here. The Ontario Legislature Building has been on this site for over 100 years, but previously the land housed a lunatic asylum, and the ghosts reported here are reminiscent of that time.

Perhaps the most famous ghosts at this location are a trio of women: a sad spirit dressed in a long, white, flowing robe who wanders the halls; a women in a checked dress tossed over her face, concealing her features; and, the most gruesome, a women who is rumored to have hung herself and is to be seen (if you're lucky!) dangling from a hook in the long tunnel in the basement. Their moans are also said to have been heard echoing through the hallways.

A military man dressed in red has also been spotted gliding down the main staircase; and in a separate incident, a man in red, perhaps the same ghostly apparition, was spotted within the Lieutenant Governor's suite. 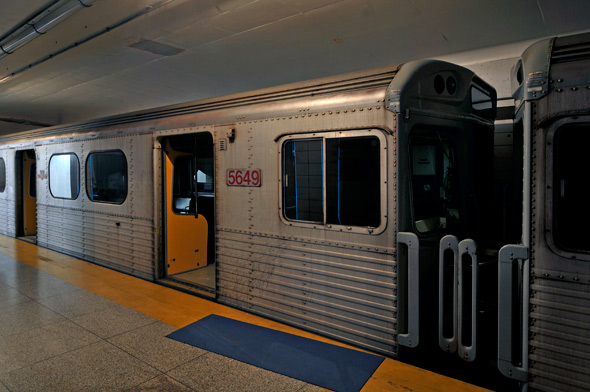 The TTC's ghost station, which was closed in 1966, is rumored to have a ghost of its own. There's been numerous reports of a "Lady in Red" haunting the tunnels of Lower Bay. The subway was only used for six months, and I've never heard of any mysterious deaths associated with it, but nonetheless workers have reported seeing a distraught lady in a red dress gliding towards them.

Disturbingly, it's said she has no feet or eyes. There are also reports of people hearing a woman's voice singing at night. Though no one can quite make out the song, I like to pretend it's a rendition of Chris de Burgh's "Lady in Red". 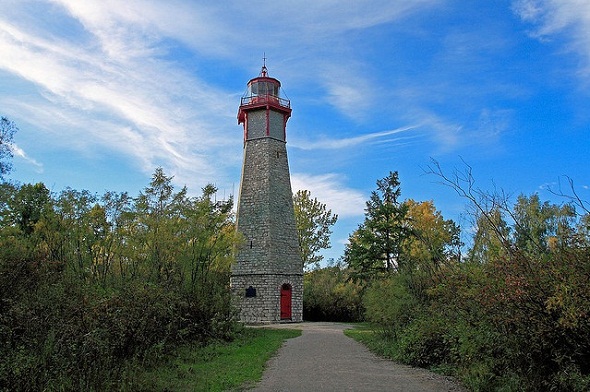 The lighthouse on the Toronto Island is an unusual haunted location. What makes it stand out from other so-called haunted buildings in Toronto is the plaque outside directly acknowledging the legends and ghostly presence. The plaque acknowledges mystery surrounding the death of Gibraltar Point's first lighthouse keeper, John Paul Rademuller, who died in 1815 and whose remains were discovered scattered around the lighthouse in 1893.

Rademuller was not only a lighthouse keeper, but was moonlighting as a brewer of bootlegged beer. The story goes that he refused to serve two drunken soldiers his illicit brew, prompting them to hit him over the head, killing him. Panicked, they covered up their crime by dismembering his body and scattering the remains across the ground... and setting the scene for a spooky ghost story. People have seen the ghostly figure of Rademuller clambering up to light the beacon on dark, stormy nights to guide the ships into harbour. In other stories, it's said his ghostly apparition can be spotted searching the ground for his missing limbs. That must suck. 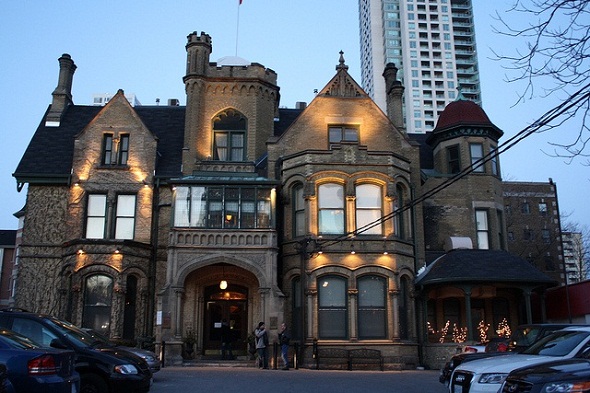 The Keg Mansion or, as it used to be known, Euclid Hall, is touted as one of the most-haunted places in Toronto, and has even witnessed expert ghost hunters investigate the premise.

During a time when the building was owned by the Massey Family, Lillian Massey died after years of declining health. A maid took her own life upon hearing of Lillian's death — speculation says either because of grief or an illicit affair with one of the Massey men — hanging herself above the main staircase. Some nights, it's said that you can still see her disturbingly dangling in the air. A young boy has also been spotted playing on that same staircase, running up and down the stairs and even stopping to watch guests dine. If you get the feeling you're being watched while chowing down on your dinner — it just might be that are.

And finally, if there was ever a reason for woman to go to the bathroom in pairs - the ladies room at the Keg Mansion would be it. Doors have been known to unlock and swing open by themselves, bags have been moved, and people feel creeped out as if someone — or something — is watching. 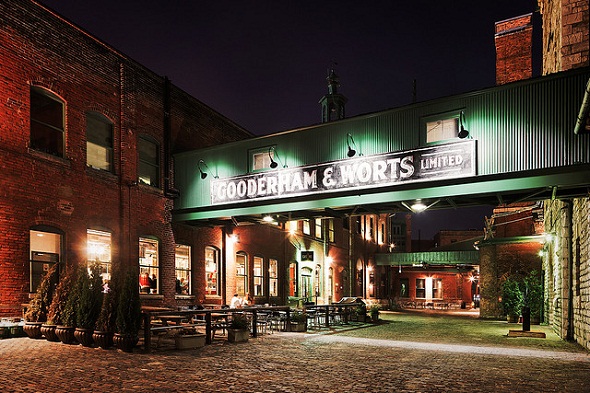 The Gooderham & Worts Distillery is well known in the city for its boozy past, but a less known story about the area involves the tragic death of one of the founders, James Worts. In 1834, Worts drowned in a well on the mill's property - and, as rumor has it, many believe this was suicide, as he was stricken with grief following the death of his wife while giving birth.

Incidences of doors opening and closing by themselves, lights turning on and off, heavy, boot-clad footsteps (with no apparent source), and a strange hammering noise late at night have haunted visitors and staff alike. Many claim to have felt a chilling presence in the building, even in the summer heat. 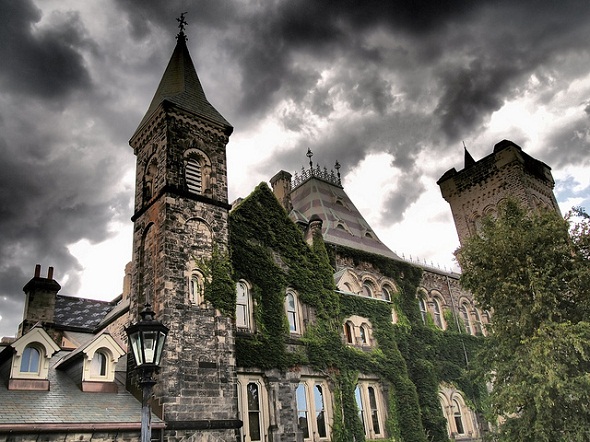 The number of ghost stories surrounding U of T could likely encompass an entire post alone, but the most famous legend is the tale of two stonemasons, Ivan Reznikoff and Paul Diablos who were competitors for the same woman. Reznikoff was engaged to the young lady, but Diablos, also taken by her beauty, convinced her to elope out west with him.

Their affair was discovered and Diablos was confronted by an angry, ax wielding Reznikoff before the two could make their escape. A brutal argument and chase ended in the University College tower with Reznikoff's death. This is where the stories diverge - in one version, Diablos stabs Reznikoff to death with a concealed dagger. In another, Reznikoff swings the ax, loses his balance, and plumets to his death. Regardless of how he died, Reznikoff's body was hidden on the campus by Diablos in an attempt to cover the crime.

For years following Reznikoff's disappearance, people saw ghostly apparitions around University College and Chapter House. Well after the fire in 1890, human remains were discovered in a ventilation shaft, and though reports of apparitions have died down since then, there are still stories of unexplained, spooky sightings trickling in.

Was it Reznikoff's body that was discovered, or someone else's? No one is quite sure - but even today, people still hear inexplicable banging echoing throughout the college.

Do you have a ghost story or legend about a Toronto landmark we missed? Add it in the comments below!