Riders of the Sheppard line (I know you're out there) might have wondered what's with the sketched-in platform between the tracks in the upper level of Sheppard-Yonge station.

The area is a ready-to-use platform (it just needs a few tiles and lights) built in case the station sees a surge in the number of riders changing between the two lines. The interchange stop is already the third busiest in the subway system, after Bloor-Yonge and St. George, but Danny Nicholson from the TTC says its unlikely the platform will see use any time soon.

"Two platforms could theoretically be required for the Sheppard Subway at Sheppard-Yonge Station, if ridership was so high that one platform is required for boarding and a second one for alighting like at Kennedy Station on the Scarborough RT," he says.

"At this point, ridership on the Sheppard line does not justify the use of the platform. You never know in the future."

Installing the concrete structure didn't add much to the cost of the line, Nicholson says. The platform simply fills what would have otherwise been a large empty space between the tracks, a byproduct of an X-shaped crossover track west of Sheppard-Yonge. 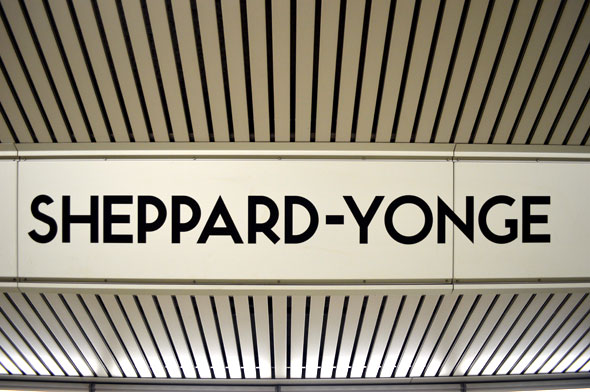 The Sheppard line was originally intended to continue west to Downsview, closing the loop between the two ends of the Yonge-University-Spadina line. As the project was scaled back these plans were dropped in favour of the current truncated spur between Yonge and Don Mills.

The concept of dedicated platforms for entering and exiting passengers is commonly known as a "Spanish solution" for its widespread use on the Barcelona metro. The first subway station in the world to use the idea was the long-closed King William Street station on the London Underground.

The Sheppard line is the least-used of all the TTC's subways - the Scarborough RT takes the prize for the quietest rapid transit line, though. Some context: the Bloor-Danforth line is 10 times busier while the Yonge line sees 14 times the number of riders.

A loner's paradise, Bessarion on the Sheppard line is the quietest underground stop on the TTC entire system. Ellesmere, the loneliest stop of them all, located under a flyover on the edge of an industrial park, is the only place on the TTC where you're less likely to be seen.