After decades of sitting derelict on Toronto's waterfront and multiple scrapped ambitions for the post-industrial site, the Canada Malting Silos are finally getting some love as part of the City-led Bathurst Quay Neighbourhood Plan & Canada Malting Silos rehabilitation.

Restoration work is well underway on the hulking concrete monolith, as new public realm enhancements and programming announcements like OCAD U's Global Centre for Climate Resilience through Art and Design promise a new lease on life for the 20th-century industrial landmark.

Bryan Bowen, a planner with the City of Toronto, has been sharing updates throughout the revitalization, making news back in January when he posted photos of a large accidental camera obscura created by a hole in the silos' aging concrete shell.

Getting the silos into habitable condition is no easy task, especially after four decades of disuse and deterioration.

In a truly upsetting sequence of words, Bowen tweeted in late March that the silos "have accumulated tens of thousands of litres of sludge & contaminated water — partially a result of abandoned grain," adding that cleanup of the disgusting mess had already begun.

BQNP Update #48: After sitting vacant for nearly 40 years, the Canada Malting silos have accumulated tens of thousands of litres of sludge & contaminated water - partially a result of abandoned grain. Work is now underway to remove all of it in prep for future ground floor uses. pic.twitter.com/sLoJqD0H4T

"One of the things we wanted to do to support future reuse for the silos but also to support activation and animation in and around the silos is to reconnect them to hydro," says Bowen.

"And that's a big expensive, messy investment. You've got to take this great big trench and run this concrete duct bank to the sides. So this is part of the work that we need to do to prepare the site for the public realm."

BQNP Update #50: Here’s a behind the scenes look at the pedestrian ‘portal’ we’re creating between the two malting silos. Once complete, this pathway will be publicly accessible, 5+ metres wide and open to the sky above! @ERAarch @BrookRestoratn pic.twitter.com/rZTdNi1u9f

Bowen explains that after the north silo was built, the gap was "enclosed with a very sort of utilitarian concrete block wall, simply built to secure and enclose the access to the silos."

"We've been exploring with our design team, working with ERA architects, engineering, and Brook Restoration, the way in which that we could open up that portal through the demolition of that concrete block wall structure, and create this linkage," he said.

The portal will align with an east-west pedestrian pathway extending from Eireann Quay to Bathurst Quay. Bowen adds that "if you're standing on Eireann Quay 200 metres to the west, you're able to actually look all the way through the site and see to the waterfront on the other side of the silos." 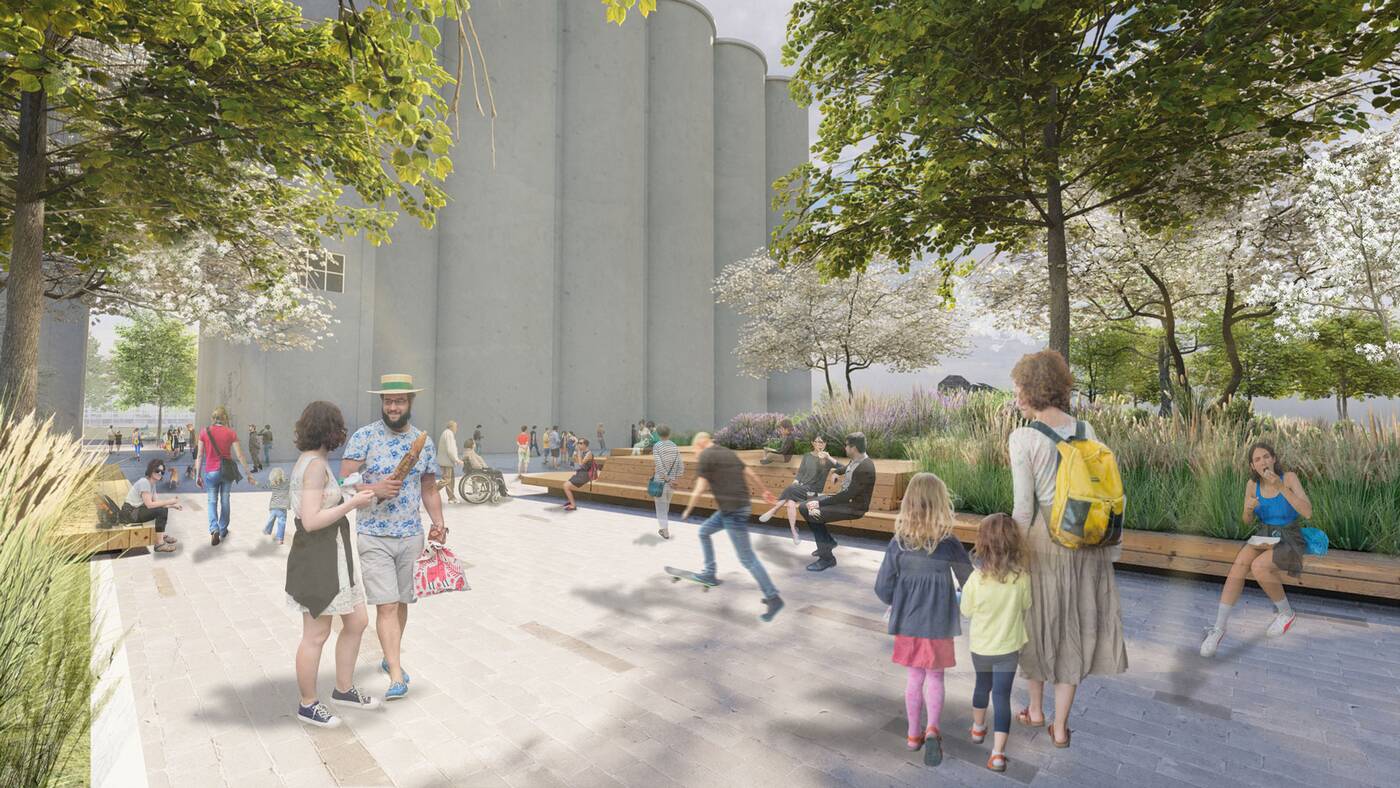 "That's meant to draw you into and through the site. It's meant to catch your eye and spark this idea that there's something worth exploring here."

"There's this opening that will be graded and lit, and there will actually be an exhibit containing archival photographs and an explanation from the Heritage bylaw that describes why these buildings were worth preserving," says Bowen.

"When you come out the other side, the whole Toronto waterfront opens up, the whole of the skyline. So it's this great compression and release technique. And that's really critically by accident, we didn't, we didn't put it there. It just happens to exist."

Bowen explains that the silo 'portal' opening will be visible later this Spring once the concrete block walls are demolished, adding "that the silo rehab work will last approximately one more year, with adjacent public realm construction lasting until late 2023/early 2024."

"So it will likely be 2024 before the general public is able to experience walking through this new connection to our waterfront's industrial heritage and history."