These are the most dangerous and deadly streets in Toronto

Just getting around Toronto can be a harrowing experience, whether contending with inadequate bike lanes, avoiding subway pushers, or driving on generally crappy roads.

Every year the Canadian Automobile Association (CAA) releases its list of the country's worst roads, but these are voted in by the public, and only really speak to the condition of roads.

For the 2021 list, Eglinton Ave East and West in Toronto landed as the 5th and 7th worst roads in Canada, respectively.

They're miserable to travel for motorists, cyclists, and pedestrians, but how dangerous are these streets?

It turns out that Eglinton isn't just the worst street in Toronto to travel on, but it's also the most dangerous, according to a roundup of the city’s most deadly roads based on the number of people killed or seriously injured (KSI) in traffic collisions.

Compiled by City Hall analyst Matt Elliott in his weekly newsletter, the list uses the Toronto Police's Public Safety Data Portal to determine which streets record the highest number of KSI incidents, and surprise, surprise, Eglinton is right there at the top of the list.

Sure, Crosstown construction has turned the street into a warzone for over a decade, but it appears that Eglinton's problems predate the transit project and its traffic woes, as the street's poor ranking includes KSI reports going back to 2006, long predating the project.

To determine which street is Toronto's most dangerous, Elliott pored through KSI data published by police, counting each instance of a street name appearing in KSI collision records and then sorting from the highest to lowest. 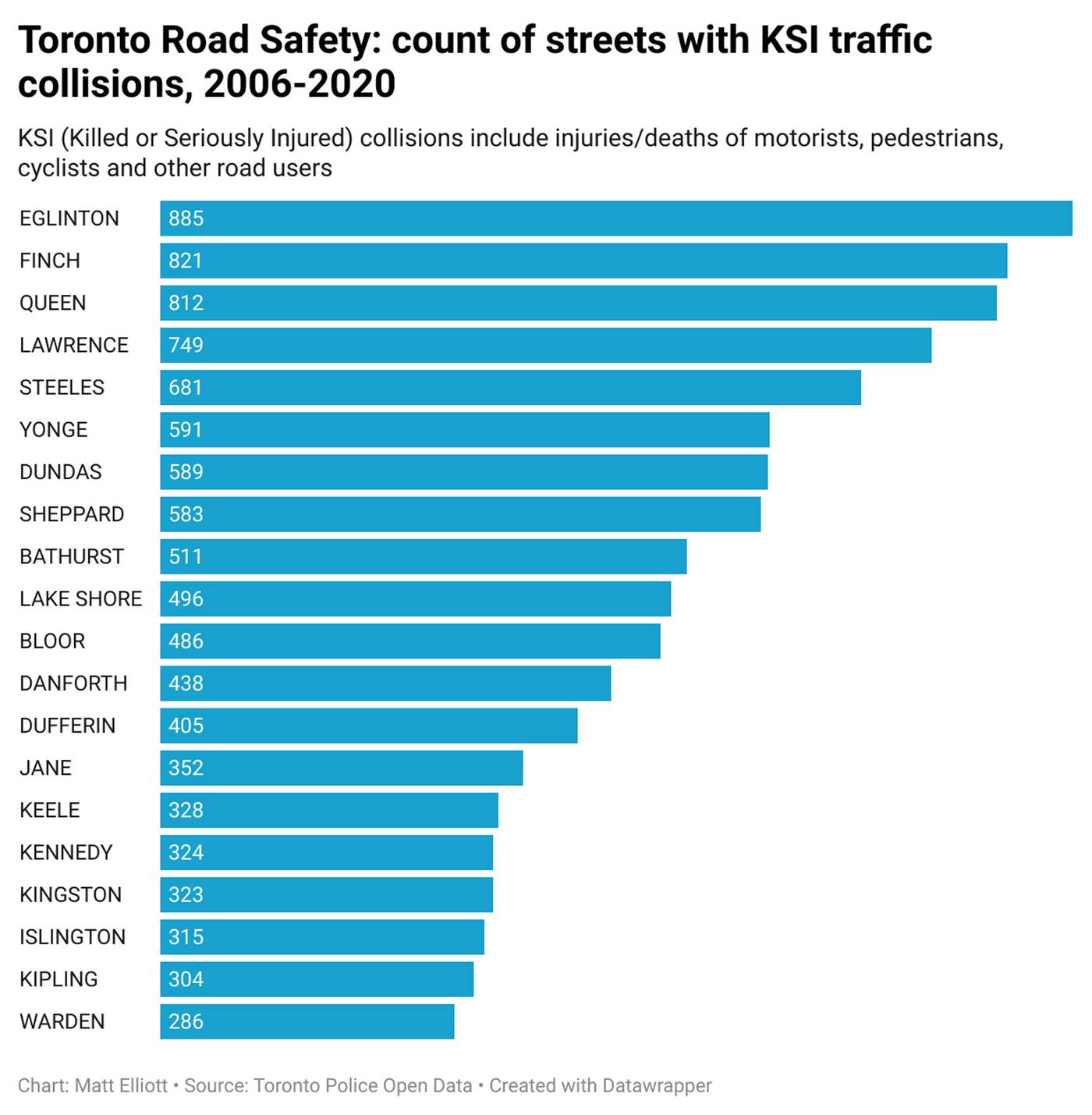 Full rankings for combined injuries and deaths of motorists, pedestrians, cyclists, and other road users from 2006-2020. Image via Matt Elliott.

When broken down separately by pedestrian and cyclist KSI collisions, the rankings look a bit different.

Queen Street topped the list with 159 pedestrian KSIs, while Eglinton was close behind with 150. Finch, Lawrence, and Yonge rounded out the top five. Dundas, Bathurst, Sheppard, Steeles, and King were also hotspots for pedestrian KSIs. Among the top ten, only King Street saw fewer than 100 pedestrian KSI reports.

Data really underscores the different commuting habits of downtown dwellers versus the surrounding city, with the list of the top streets for reported cyclist KSIs mostly located in the city centre, where cycling rates are much higher.

Dundas was the most dangerous street for cyclists from 2006 to 2020, with 50 KSIs, followed closely by Queen with 48, King with 45, and Bloor with 42. Further down the list, College had 28 reported KSIs, 26 for Yonge, and 23 for Spadina. Danforth, Dufferin, Bay, and Lake Shore all tied with 22 incidents.

Elliott admits in his newsletter that there are some caveats to his methods, like inconsistencies in how street names are written.

As a fix, he combined streets like Eglinton East and West, which creates the added caveat of lengthy arterials being more likely to top the list, admitting a per-kilometre analysis would offer more insight.

Still, the lists provide a much clearer picture than the annual CAA poll of which Toronto streets are objectively the worst.