More than a year-and-a-half into this pandemic, I can honestly say that I don't miss jamming myself onto a packed streetcar in downtown Toronto every morning.

But I do miss Soup Nutsy, CJ Lunchbox, Green Box, Little India and the many PATH shops I used to frequent for last-minute gifts and replacement mittens.

Hopefully, these businesses will be right where we left them back in March of 2020, when COVID-19 hit and sent everybody running from their offices for the safety of their homes. But it is unlikely.

New data released today by the Toronto Region Board of Trade (TRBOT) shows that the city's downtown core continues to lag behind in terms of its economic recovery compared to other parts of what it calls the "Innovation Corridor."

A wide spanning geographic area anchored by the Toronto, Hamilton and Waterloo regions, the corridor in question has been split up by TRBOT into five different "Business Districts" for its new Recovery Tracker tool.

"The Recovery Tracker is meant to provide businesses, policy leaders and other interested parties with the knowledge and trends that will help inform future strategic and investment decisions," said TRBOT president and CEO Jan De Silva in a release announcing the new web-based dashboard on Friday.

"As we continue our economic recovery and begin to look towards a return to office – once the timing is right – it is going to become increasingly important to better understand how different types of businesses have been impacted by COVID-19, and what their recovery will look like. That is what the Tracker aims to inform." 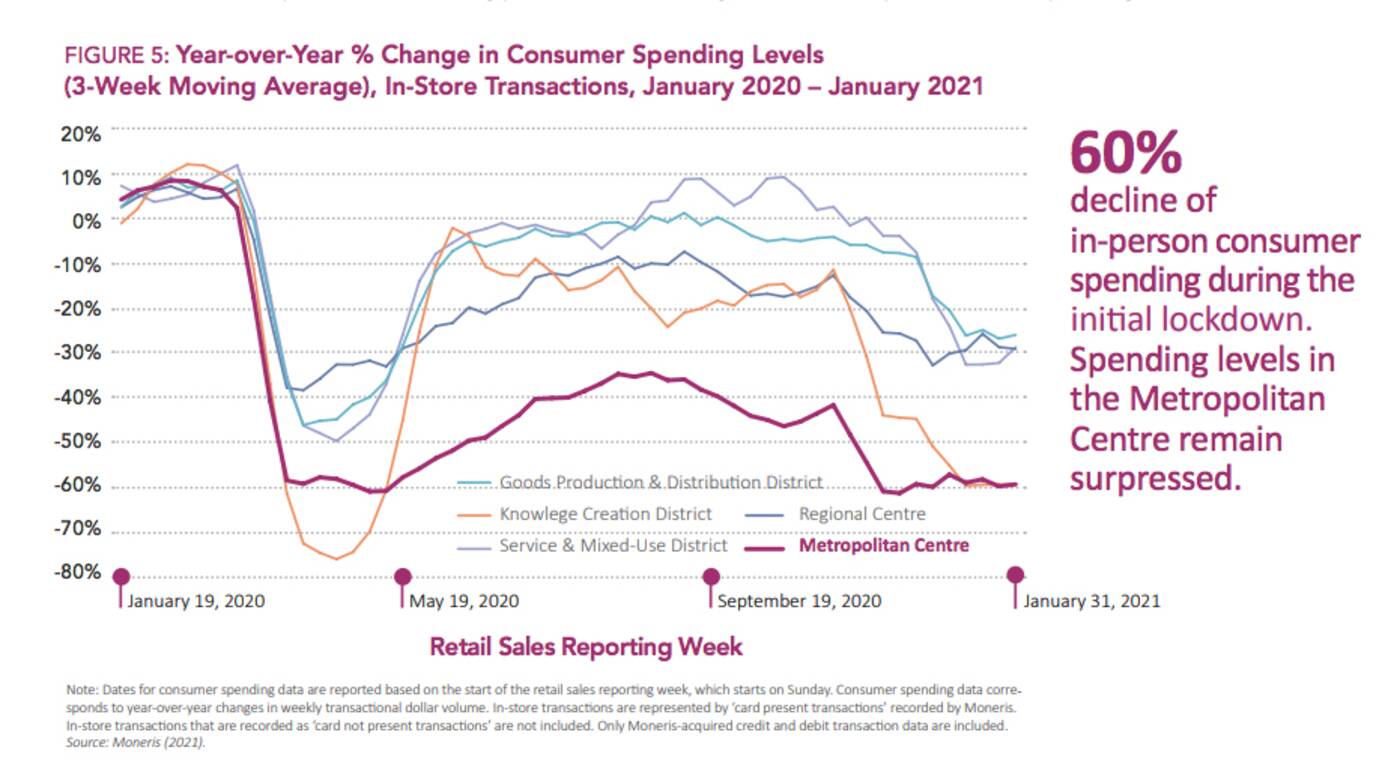 Spending dipped sharply across the board during the pandemic, but Toronto's downtown core is showing the slowest recovery to date. Image via Toronto Region Board of Trade.

It should come as no surprise that downtown Toronto comprises its own district, known formally on the tracker site as "The Metropolitan Centre" or "MC."

What might be surprising is how poorly this district has fared compared to the other five districts (a map of which can be seen here.)

"Since the start of the pandemic and ensuing shutdowns, in-person consumer spending has plummeted in the MC, declining by more than 60 per cent during the initial lockdown," reads a report about downtown Toronto, specifically, released in conjunction with the tracker.

"While other Business Districts experienced a gradual recovery in consumer spending as the lockdown was eased, spending levels in the MC remained suppressed... This is likely due to maintained restrictions in the City of Toronto due to a high number of COVID-19 cases, a limited volume of day-time workers, and a large presence of one storey retail stores and regional shopping centres in the MC."

The report, titled "Challenges Today and Futureproofing for Tomorrow in the Metropolitan Centre of Canada's Innovation Corridor," explains that consumer spending saw the highest drop (80 per cent) in the entertainment and travel sectors.

One needs only to take a walk through the ghost town that used to be the Financial District on a weekday to see how much restaurants, bars, retail stores and hotels are hurting as a result of the pandemic.

Analysts from the TRBOT's Economic Blueprint Institute blame most of the decline on two things: A dearth of tourists and the widespread shift toward remote work.

"The combination of the exodus of day-time workers and the absence of foot traffic from domestic and international tourism has effectively halted economic activity in the District and the massive decline in in-store consumer spending has undoubtedly hurt thousands of small business owners," reads the report.

"With a rise in vacancy rates of office buildings, plummeting transit users, sustained drops in consumer spending, and widespread job losses, the MC has been dealt a staggering blow."

More employees have the capacity to work from home in the downtown core of Toronto than anywhere else across the larger region. Image via Toronto Region Board of Trade.

With an estimated 67 per cent of employees in this district currently able to work from home, it's easy to see how the once-bustling core became so quiet. What's harder to predict is when things will bounce back... if they ever do.

While many employers announced plans to reopen their offices this summer as Ontario rocketed through the first two steps of reopening, the emergence of a fourth wave driven by the highly contagious Delta variant has put a kink in those plans.

It's looking more and more as the months go on that many people will continue to work from home, at least part of the time. CBRE Economist Richard Barkham is quoted in the TRBOT report saying that surveys forecast a 32 per cent drop in the number of days workers spend at the office.

"The shift towards remote and hybrid work arrangements is expected to stay, with wide ranging ramifications for urban inequality, recovery in the downtown core, and the demand for office space," reads the report, which warns that "the 'stickiness' of remote work and slow rebound of the visitor economy will have lasting effects" on the region as a whole.

But it's not all doom and gloom: The board also offers up a host of potential solutions to help enable a successful longterm recovery for downtown Toronto's economy.

Measures floated include "reskilling and upskilling" vulnerable workers in the MC who can't do their jobs remotely and urging governments "to increase their flexibility with respect to regulations and policies towards the use of buildings and public space.

And as for remote workers who are reluctant to leave the comforts of their home office, the report states that "employers must configure offices to support social interactions and collaboration, which will be a key reason for workers to return the office."