The vast majority of Toronto office employees are still working from home, according to a new index that tracks daily foot traffic near commercial buildings in major North American cities.

Data from global real estate advisory Avison Young's newly-launched Vitality Index indicates that the number of people actually going into offices across Toronto every day is still 86 per cent lower on average than it was the week before the first major pandemic lockdown.

For the week of September 6, the index estimates that around 4,063 people per day visited "representative office occupiers" in Toronto, contrasted against 28,660 during the week of March 2, 2020.

Foot traffic peaked for 2020 during the week of January 20, according to Avison Young, when some 35,528 visitors per day were entering buildings with tenants in the banking, consulting, finance, hospitality, insurance, nonprofit, tech and telecommunication industries. 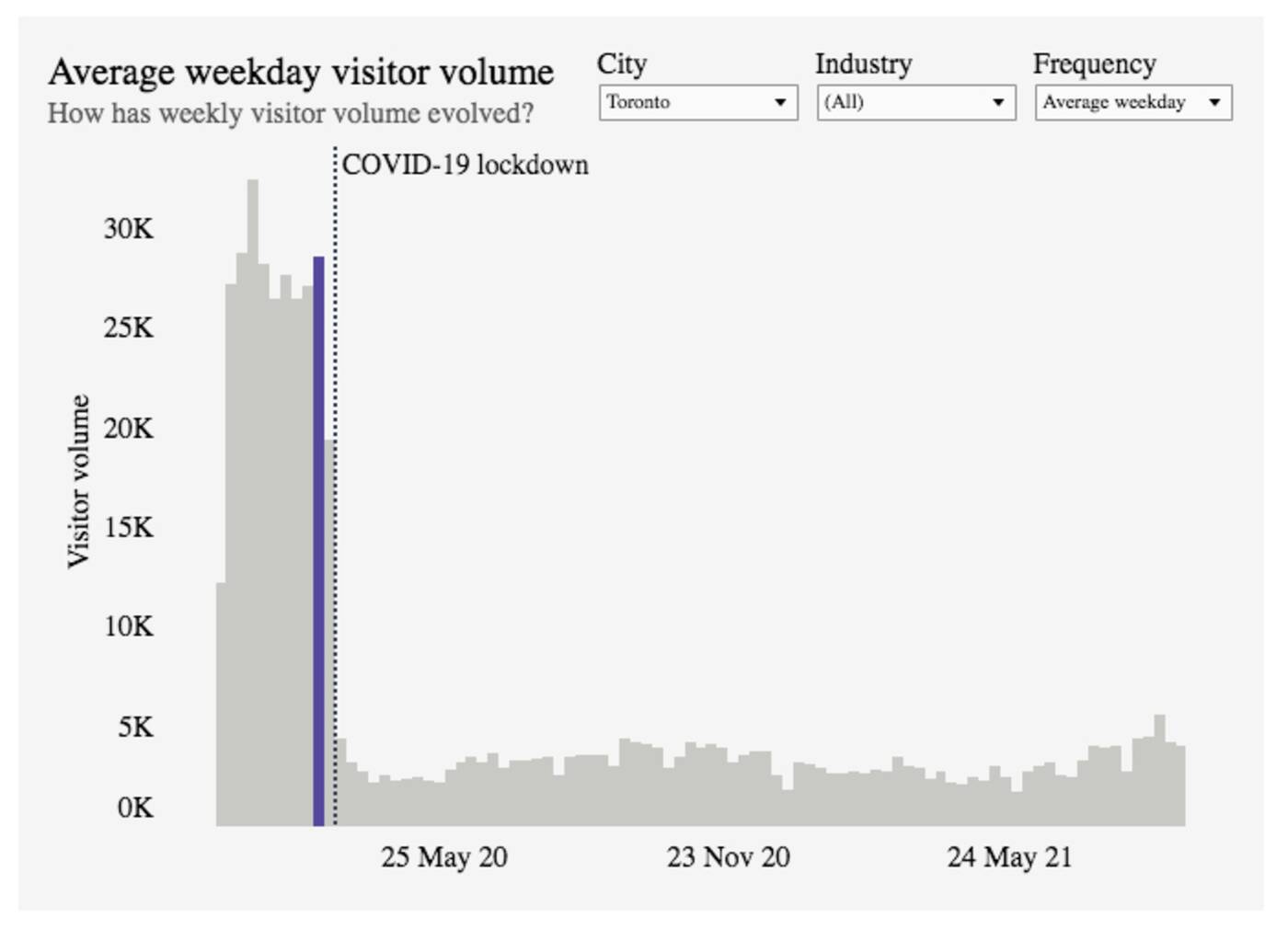 Foot traffic is rising in Toronto's downtown core again, but has yet to reach anything near pre-pandemic levels. Image via Avison Young.

As for how they gleaned this information, Avison Young partnered with a geospatial intelligence and location analytics company called Orbital Insight to "utilize anonymized cell phone location data geofenced to unique locations."

The latter company is said to aggregate this anonymized data to estimate total foot traffic in each city and industry, dating back to June of 2019 in the U.S. and January of 2020 in Canada.

You can explore their interactive dashboard yourself to see how different industries stack up against one another in Toronto or any of the other 20+ metropolitan cities, as well as compare how each city's return-to-office efforts are going.

As of last week, Boston was faring the best, with average weekday visitor volumes at 55.2 per cent of pre-COVID levels. Ottawa came in dead last with an 89.5 per cent dip in foot traffic since early March of 2020.

"The current real-time data from The Vitality Index indicates that there is a steady increase in foot activity in major cities, but still trending significantly below 2019 levels," wrote Avison Young when introducing the index on Monday.

"Hopes of the widespread return to work after Labor Day did not materialize and there is a fundamental shift with the nature of office work that has taken place." 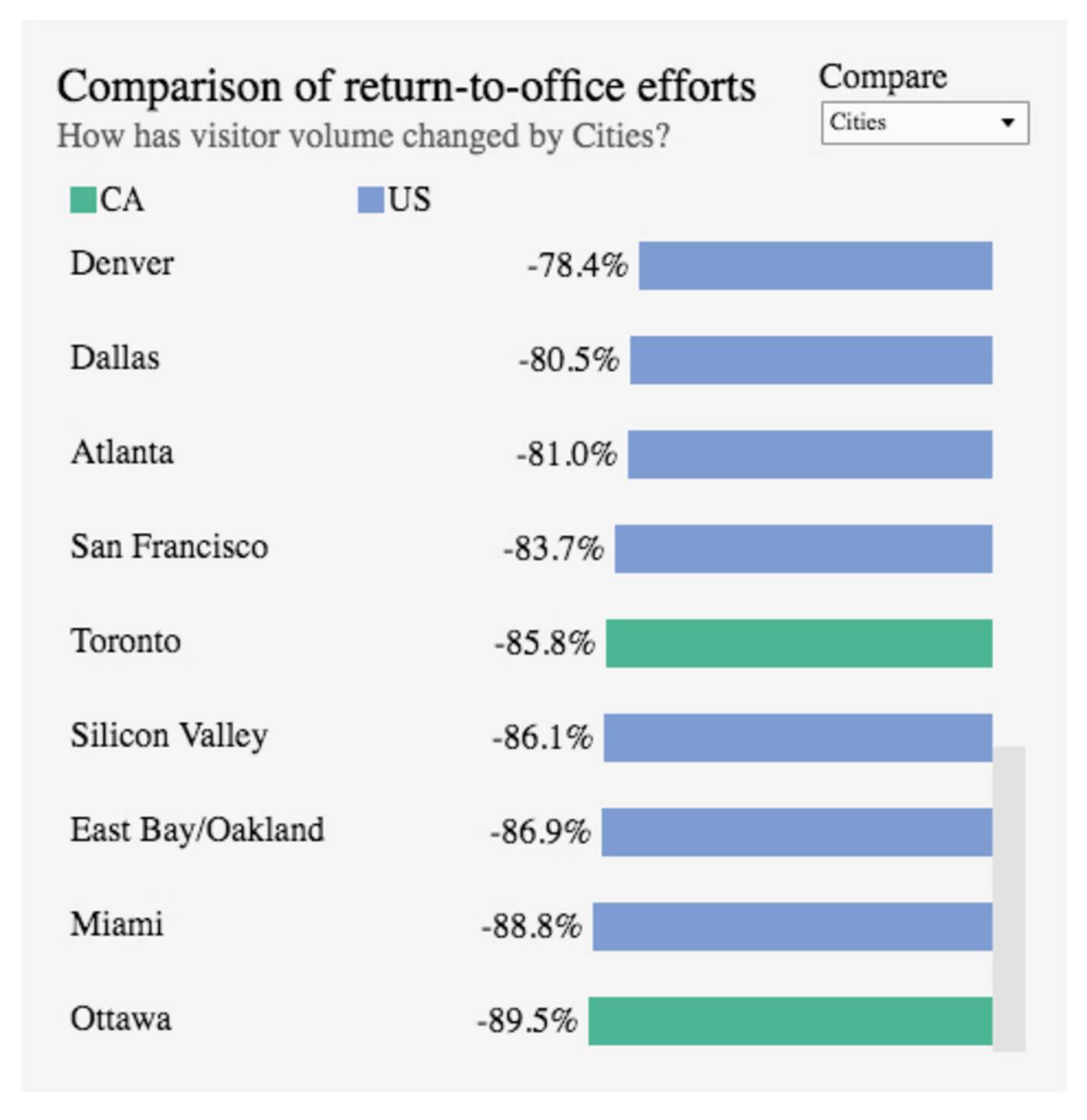 Toronto clearly isn't alone in experiencing this shift — foot traffic is said to be down by just over 76 per cent on average across all cities studied. Image via Avison Young.

At least 80 per cent of Canadian office workers were found in a survey earlier this year to be in favour of going back to the office part-time under a "hybrid model," and employers were announcing their back-to-work plans as recently as July.

The City of Toronto launched its own campaign early this summer as the provincial government's reopening framework moved along ahead of schedule, but the recent fourth wave and a lull in vaccine uptake seems to have slowed things back down again.

"As the calendar turns to September, companies across North America are faced with a long-anticipated question: is a return to the office still on track? If it is delayed, for how much longer? Will office occupancy ever look the same again?," reads a blurb under the vitality index.

"There are, of course, no certain answers to these questions. COVID-19 continues to throw curve balls our way, with wide variations in infection rates. At the same time, the dynamic between employers and employees regarding where to work has shifted, likely for good."