As rumblings grow louder of our mass societal return to in-person workplaces, a clear trend is emerging among office employees who've been working from home amid the pandemic: They don't want to go back to the way things were.

But they also don't want things to stay the same.

The newly-published results of a nationwide Angus Reid survey on working from home and returning to the office shows that only a very small fraction of Ontarians (six per cent) actually want to return to the office every single day in the future.

Roughly 29 per cent of the same group want to keep on working from home full-time forever, but the vast majority of local respondents — 65 per cent — prefer a hybrid model where they split time between their home offices and places of employment.

The reality is that most of us won't actually have a choice in the matter; it's up to our bosses and in many cases their bosses to decide where we work... if we still want to work for them. 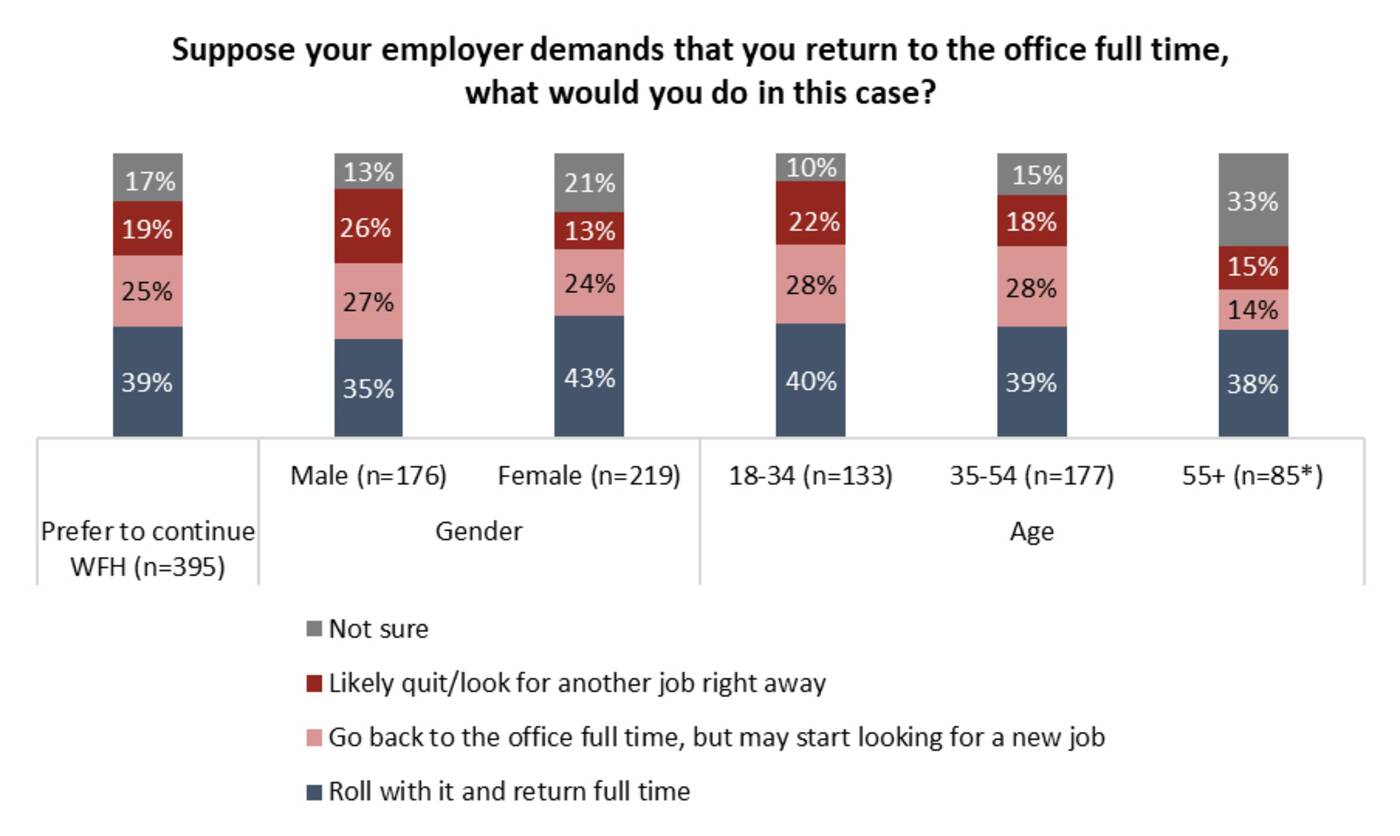 Men, and in particular younger men, were more likely than women to indicate that they'd quit their current jobs if asked to go back to the office full-time. Image via Angus Red Institute.

"What would those Canadians who want to continue working from home do if they were asked to return to the office?" asks the Angus Reid Institute in its report on the survey published Wednesday. "This condition has the potential to create some tension in employer-employee relationships in the coming months."

Among all Canadian adults sampled between July 9 and 13, two in five (40 per cent in Ontario) said that they'd return to the office full-time without much fuss if they were asked to, but 19 per cent nationwide (same ratio for Ontario) indicated that they would "likely quit."

Seventeen per cent of respondents said they weren't sure what they'd do if their boss told them to report to the workplace all the time moving forward and 25 per cent indicated that they'd go back to work as mandated, but that they wouldn't be happy about it and would likely start looking for a new job.

Despite the survey's relatively small sample size, the results do give us an interesting glimpse into the changes that COVID-19 has brought to our expectations surrounding work. 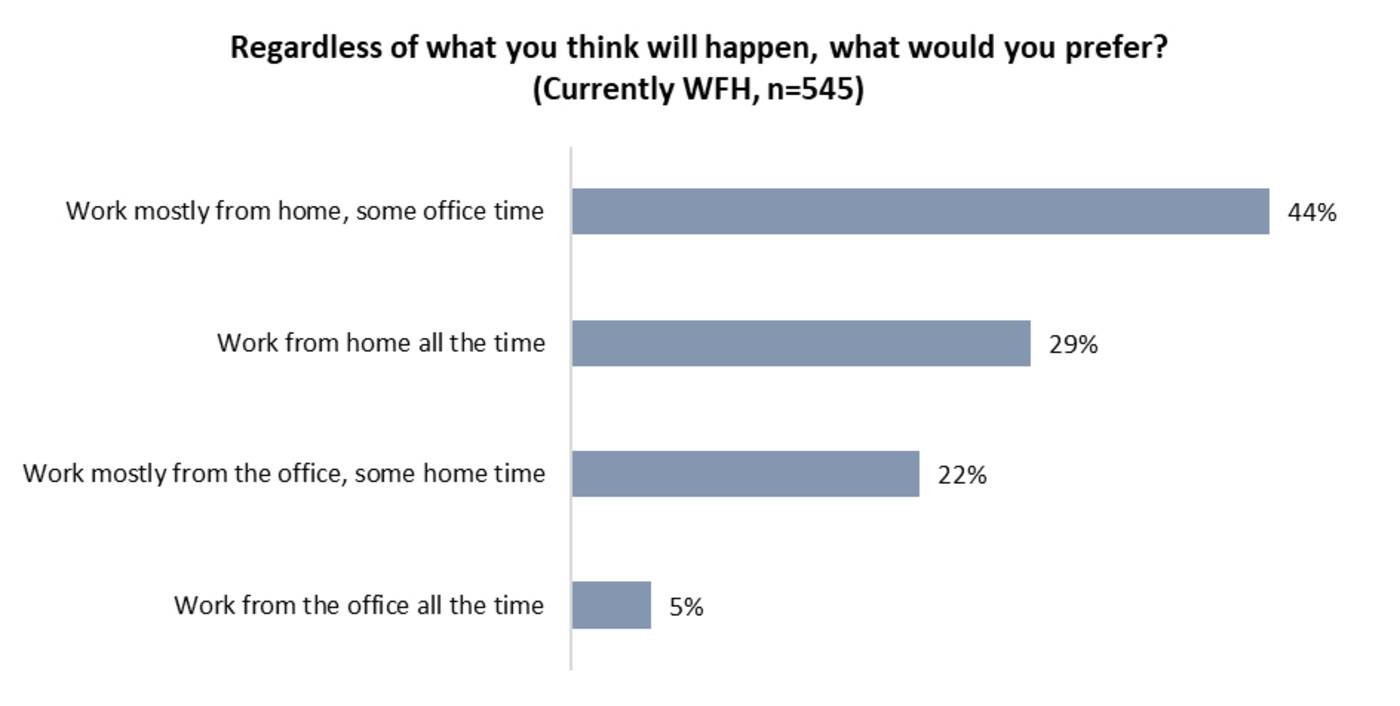 Only five per cent of all Canadian respondents actually want to work from the office all the time, while 29 per cent would be cool working from home forever. Image via Angus Reid Institute.

About half of Canadians in every region report that someone in their household worked from home during the pandemic, except for Ontario, where that percentage point rises to nearly 60 per cent.

Perhaps unsurprisingly, a positive correlation was found between income and one's likeliness to have worked remotely during the pandemic.

"A person's occupation dictates whether or not they are able to work from home. Many hourly employees can't, and some, such as grocery workers, were thrust into the role of frontline workers given the essential nature of their place of employment," writes the Angus Reid Institute.

Also interesting is that of all people who have at one point worked from home since the pandemic hit, 73 per cent have yet to return to the workplace (a number that drops as income brackets become lower.)

Some 82 per cent of Canadian respondents who make more than $150,000 per year continued to work from home as of July 2021. Image via Angus Reid Institute.

This likely has at least something to do with the fact that Ontario still has yet to fully reopen.

As we move through Step 3 of the provincial government's 3-step reopening plan, employers are only now really grinding to get their offices back in shape — or, in a lot of cases, lease brand new offices after leaving their old ones in the face of COVID-19.

And while few workers seem to be okay with a full-time back-to-the-office mandate, many are indeed ready to leave the confines of 100% work-from-home life.

Respondents in the 18 to 24 age range had particularly negative experiences, according to the survey's results, with more than half than half who worked from home indicating that their mental / emotional state was either "challenging" or "awful."

Across all age groups, nearly 40 per cent said the same about their mental states while working from home, though 71 per cent stated that their productivity was either "good" or "really great."

Productivity trended positively across the board, while social lives took a major hit as a result of the work from home trend. Image via Angus Reid Institute.

Getting work done from home might be easier for some than in a busy office, but the survey results show that the same cannot be said for making friends or having fun: 66 per cent of all people said that their social lives suffered as a result of office closures, with those aged 35 to 44 feeling the impacts hardest.

More than seven out of ten people in this demographic rated their WFH social lives as either awful or challenging.

"Men and women are more or less aligned in their feelings on their work from home productivity and mental health, but there are slight differences between the two when it comes to their appraisal of the effect on their social life," notes the report.

"One-in-10 men say their social life was 'great' (nine per cent), while roughly half the number of women say the same (five per cent)."