Ontario might not actually leave Step 3 next week as planned

What comes next after Step 3 in Ontario's post-COVID reopening plan?

People are starting to wonder as the requisite 21-day mark approaches and important milestones are hit, but the provincial government hasn't said much yet aside from that there won't be a Step 4.

"If [we hit vaccination targets] and other key public health and health system indicators continue to remain stable, then the vast majority of public health and work safety measures will be lifted," said the province's chief medical officer of health, Dr. Kieran Moore, when the move to Step 3 was approved earlier this month.

"Only a small number of measures will remain in place, including the requirement for passive screening, such as posting a sign, and businesses requiring a safety plan."

Unlike our graduations from Step 1 and Step 2, both of which happened earlier than expected, it's not quite clear at this time when we'll actually exit Step 3 and be out of the framework.

As with previous stages, the entire province is scheduled to remain in Step 3 of the roadmap for at least 21 days. We entered Step 3 on July 16, making Aug. 6 the earliest day it could (theoretically) be over. If things don't change.

Ontario is looking at changing when the province can progress out of Step 3 https://t.co/MwQkrwwQmn #Ontario #Reopening #ONpoli #Step3

Premier Doug Ford said during a press conference on Monday that a plan for leaving Step 3 would be rolling out "very shortly," but stressed the importance of first meeting our vaccination rates goals.

"We want to hit our targets of 80 per cent first dose, 75 per cent second," said the premier. "And... you know, really the protocols for most of them? They're gone to the exception of maybe a few."

As of Thursday morning, 81.2 per cent of Ontario adults had received at least one shot of an approved COVID-19 vaccine, which is promising, but represents only one of at least four benchmarks we need to hit before leaving the framework.

Ontario Health Minister Christine Elliott made this clear on Thursday morning when touting the achievement on Twitter as something that "brings us one step closer to reaching our vaccination targets to exit the Roadmap to Reopen and a return to normal."

She then shared a checklist in which the first of four boxes were ticked, noting that "Ontario will remain in Step Three for at least 21 days and until" the following criteria were met.

Other key indicators such as case counts and ICU numbers must also remain stable, but the hardest box to check might just be the one that specifies "no public health unit has less than 70 per cent of their 12+ population fully vaccinated."

Public Health Ontario data shows that some regions lag behind others when it comes to the percentage of people immunized against COVID-19.

The PHO data is different from what the Ministry of Health reports, as the Ministry tracks total doses administered to date in eligible adults. The PHO, meanwhile, calculates the percentage of vaccinated people within a region's total population.

Still, it gives us a good overall look at region-by-region differences in vaccine uptake.

In Toronto, where more than 70 per cent of adults are now said to have received two shots, 58.6 per cent of all people are fully vaccinated (this, according to Public Health Ontario.) 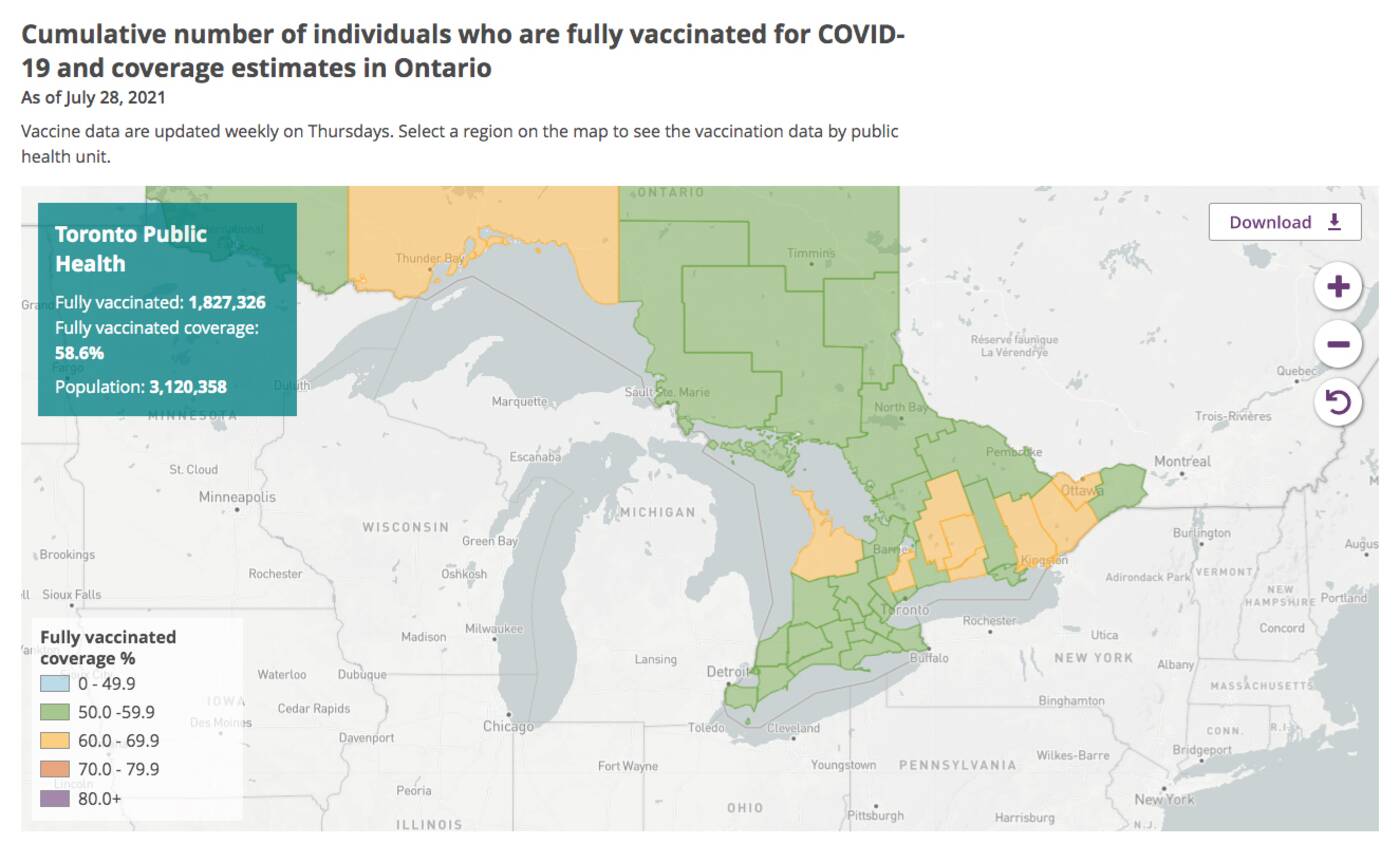 The province has based its criteria on vaccine coverage rates only in people over the age of 12, so these numbers might not mean a lot, but there is concern among some groups that lagging public health units could keep capacity limits lower-than-normal for longer than what's fair.

The Canadian Federation of Independent Business brought up the thresholds, including the "no less than 70 per cent in every public health unit" part, in a release issued Thursday when calling upon the government to lift all remaining restrictions now.

"On Tuesday, the province met the first of these thresholds, setting the stage for a full reopening as soon as August 6, 2021. CFIB is seeking clarity on details on the timing and nature of the removal of remaining COVID restrictions and what will happen if individual public health unit targets are not met," reads the release.

The group is asking the government to "allow all public health units that have hit the 70 per cent fully vaccinated target to immediately remove all capacity restrictions," rather than wait for Ontario as a whole.

Ontario Solicitor General Sylvia Jones told reporters today that the province is in fact discussing this matter, and whether or not to lower the 70 per cent every-public-health-unit-full-vaccination threshold.