Here's how to get a redesigned Presto card in Toronto

Whether you have the classic green Presto card, the newer sleek black version, or one of the few special editions, not many people are winning style points for their transit cards.

But now there's a new way to jazz up your fare pass: a company is offering up their own spin on the Presto card with a pair of metal engraved designs.

Known as prestochangeo — just soak that name in for a second — the company lets you transform your Presto card into a stainless steel, engraved showpiece for your wallet. 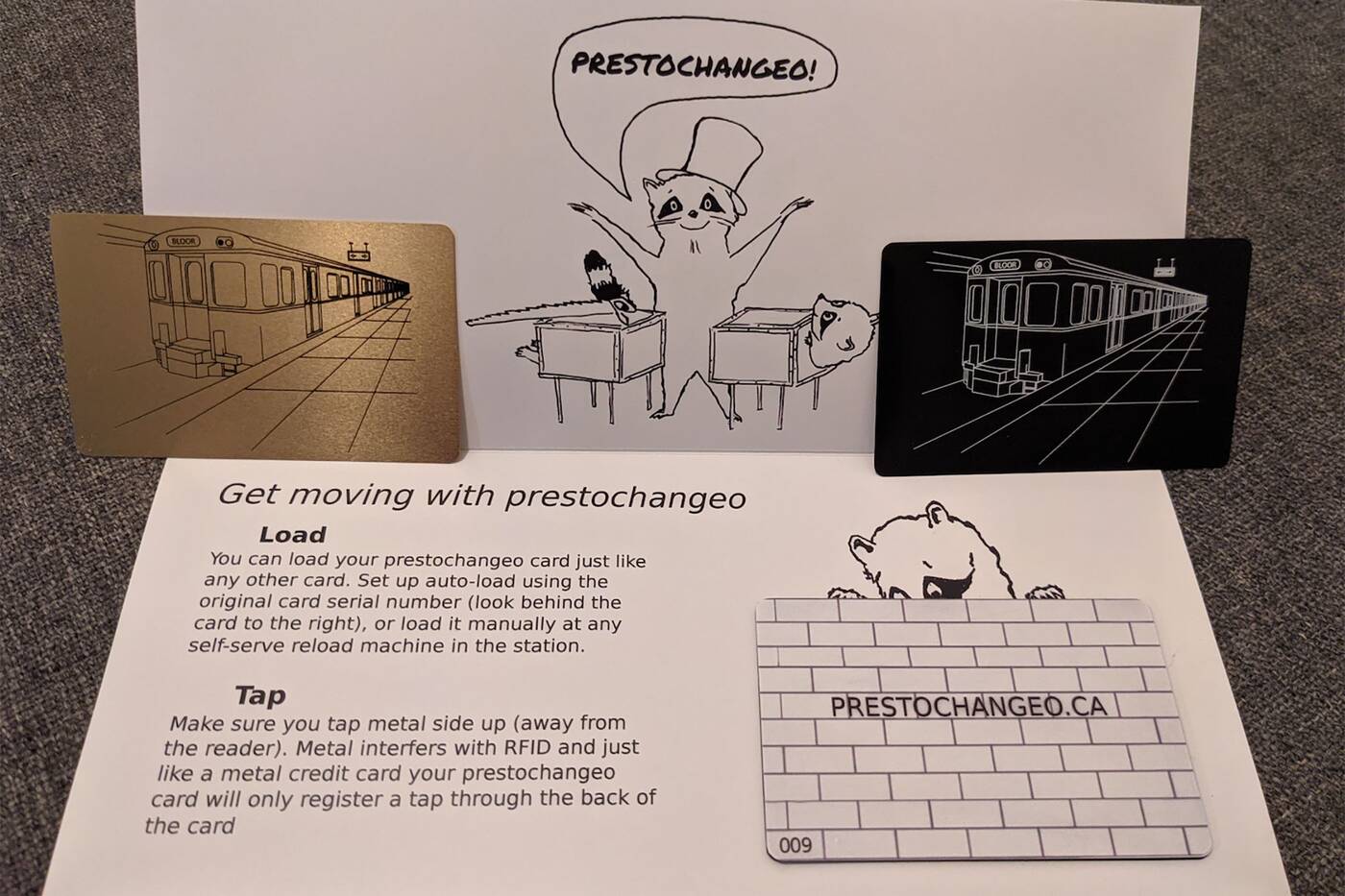 Gold and black versions of the prestochangeo card wrap. Photo by Will Huff.

The metal and vinyl card covers wrap over standard Presto cards, meaning that they pay, load and register identically to unmodified versions.

A pair of designs are available, both showing a TTC subway train, in black matte and gold matte finishes. The rears feature a classic Toronto subway station tile motif.

Will Huff, creator of prestochangeo, tells blogTO, "I was bored during the pandemic and decided to mess around with my Presto card. It turned into a bit of a project."

"I was messing around with various tap functionality cards, basically removing the plastic off of some of my cards and investigating how they work - removing the chips and wires (brains of the cards) and then putting them into other things."

"At first, I had some wood veneers laser etched with patterns, and tried to put them into some gloves as an experiment." 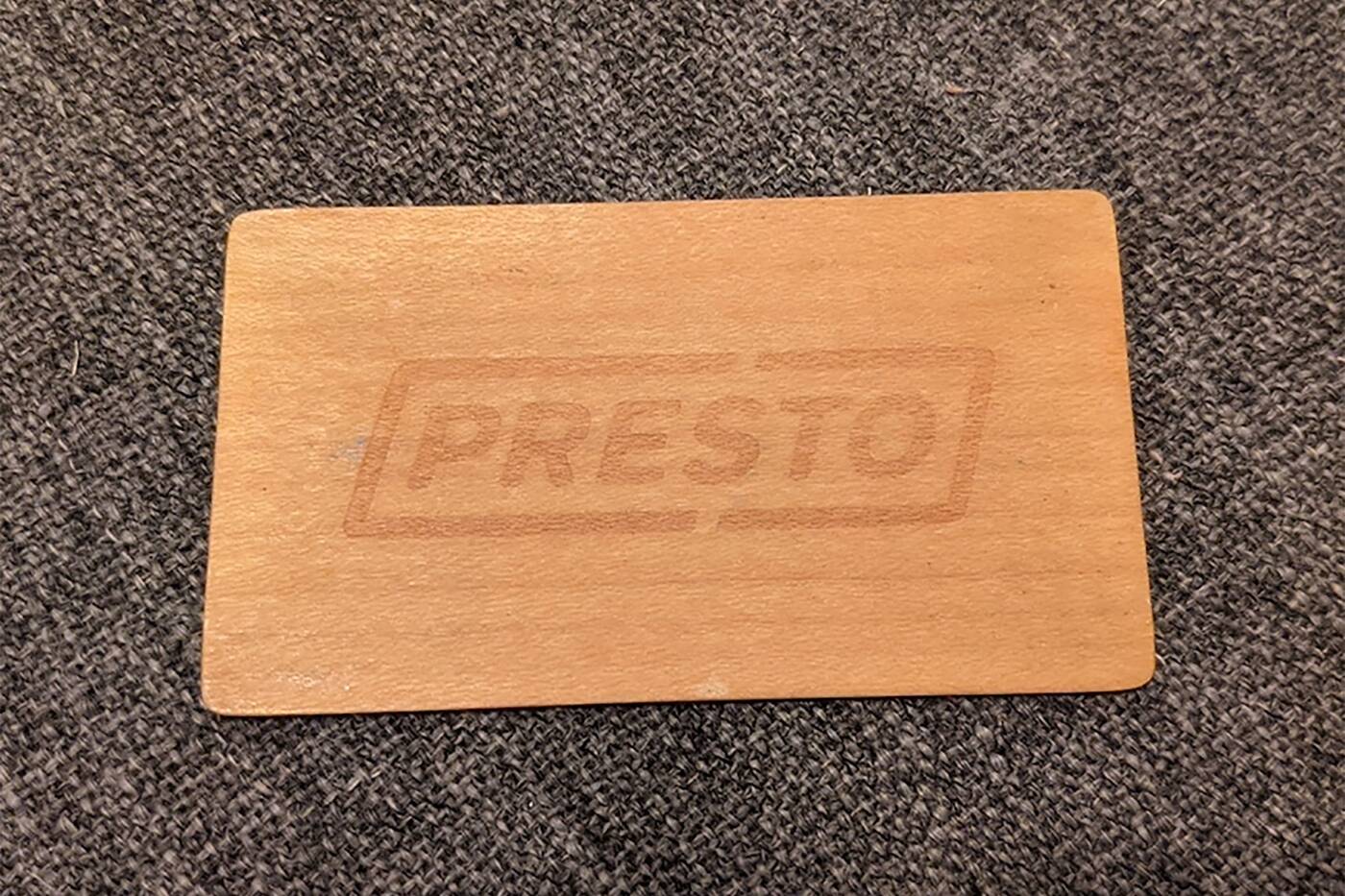 Shelved wooden version of the Presto Card. Photo by Will Huff.

The wood covers proved challenging to scale up to production levels, so Huff made the decision to go with etched metal instead, still a laborious process.

"I hand assemble each card from the components and making sure everything lines up perfectly can be time-consuming."

Aesthetics aside, there are some potential drawbacks to encasing your means of transport in literal armour.

These modifications cover up the original reverse side of a Presto card in vinyl, meaning that there is no way to see the serial number used to auto-load or manually load your card using in-station machines.

prestochangeo ships their upgraded cards with the serial numbers noted, and as an added measure, the company also keeps serial numbers on file in case a user loses theirs.

Suppose you absolutely need to get at your card information. In that case, prestochangeo's website states that the vinyl covers on the back of cards "can be carefully removed to show the original info underneath and then reapplied."

"Metal initially interfered with the tap functionality so it took some prototyping to get around that issue, and removing the chips from the existing cards involves some chemicals which isn't great, so I figured the most efficient way was to encase the original presto card in a new costume/cover — retaining all the functionality of the original card," said Huff.

Card upgrades cost $35 and take about a week to arrive by mail. The timing couldn't be better, as many are likely scrambling to get new Presto cards after the latest system upgrade made it easier to identify fare evaders using child cards.

This is not the first time transit riders have been given a way to personalize their cards, with a Toronto company called CUCU offering customizable stickers for a few years now.