People are loving this time-travel shot of a Toronto intersection

A photo merging a busy King Street from 1912 and one with the towering buildings of today caught the attention of history buffs recently.

The photo, from a history walking tour app, On This Spot, was posted on Reddit and people loved the look back in time.

"So cool. Wish we brought back the clothes and the walking, but kept the rest modern," one person wrote. 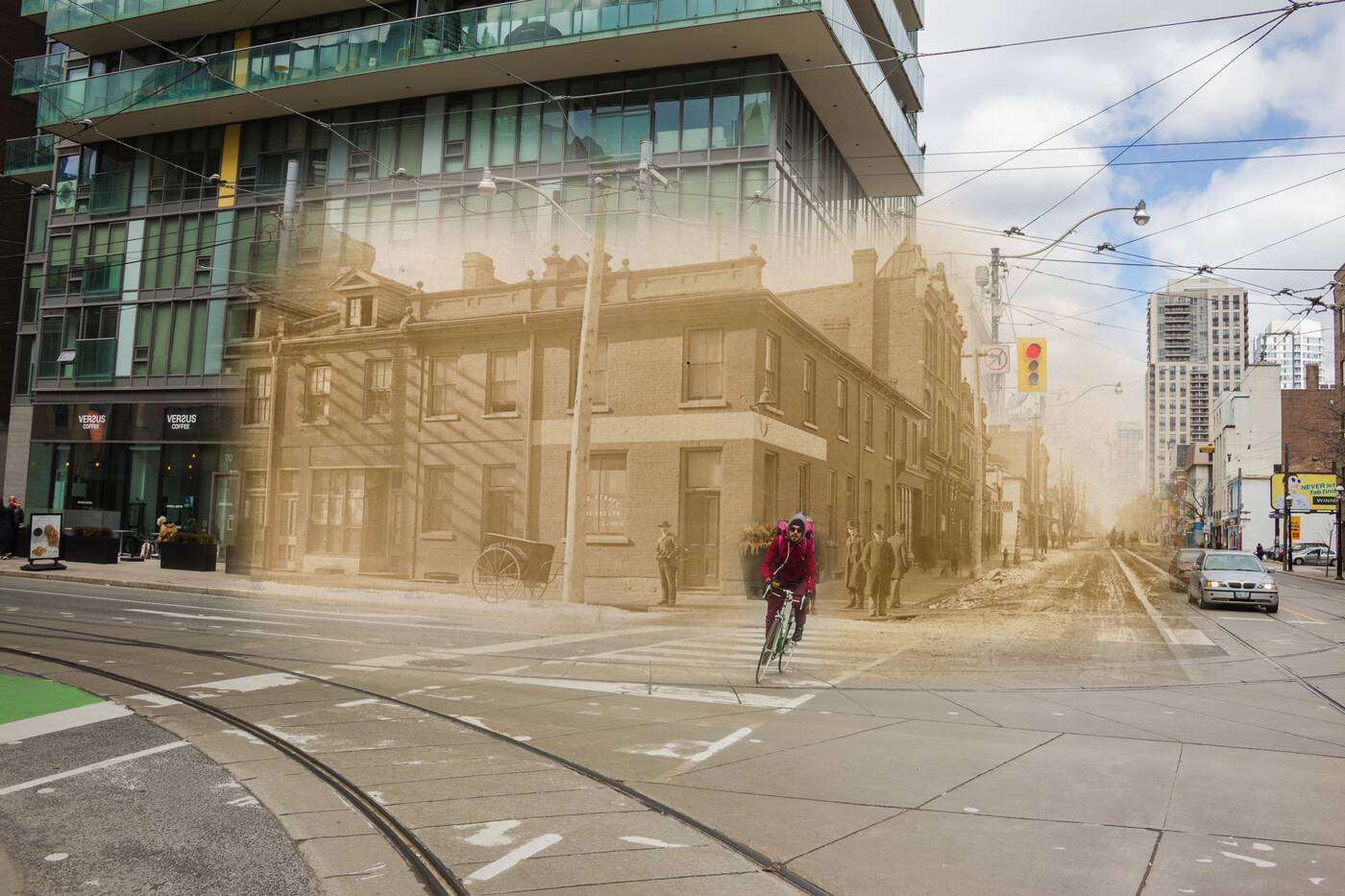 This blended photo from On This Spot shows several men on the corner of Adelaide and Church in 1890. The muddy street has water-filled ruts on at the right as most of Toronto's streets wouldn't be paved until long after the introduction of cars.

The photo is part of a collection from On This Spot compiled for a free Toronto walking tour, On This Spot founder and CEO, Andrew Farris, tells blogTO.

Farris, who is based in Vancouver, visited Toronto in 2018 to photograph the spots to merge with historic photos he found through the Toronto Public Library. 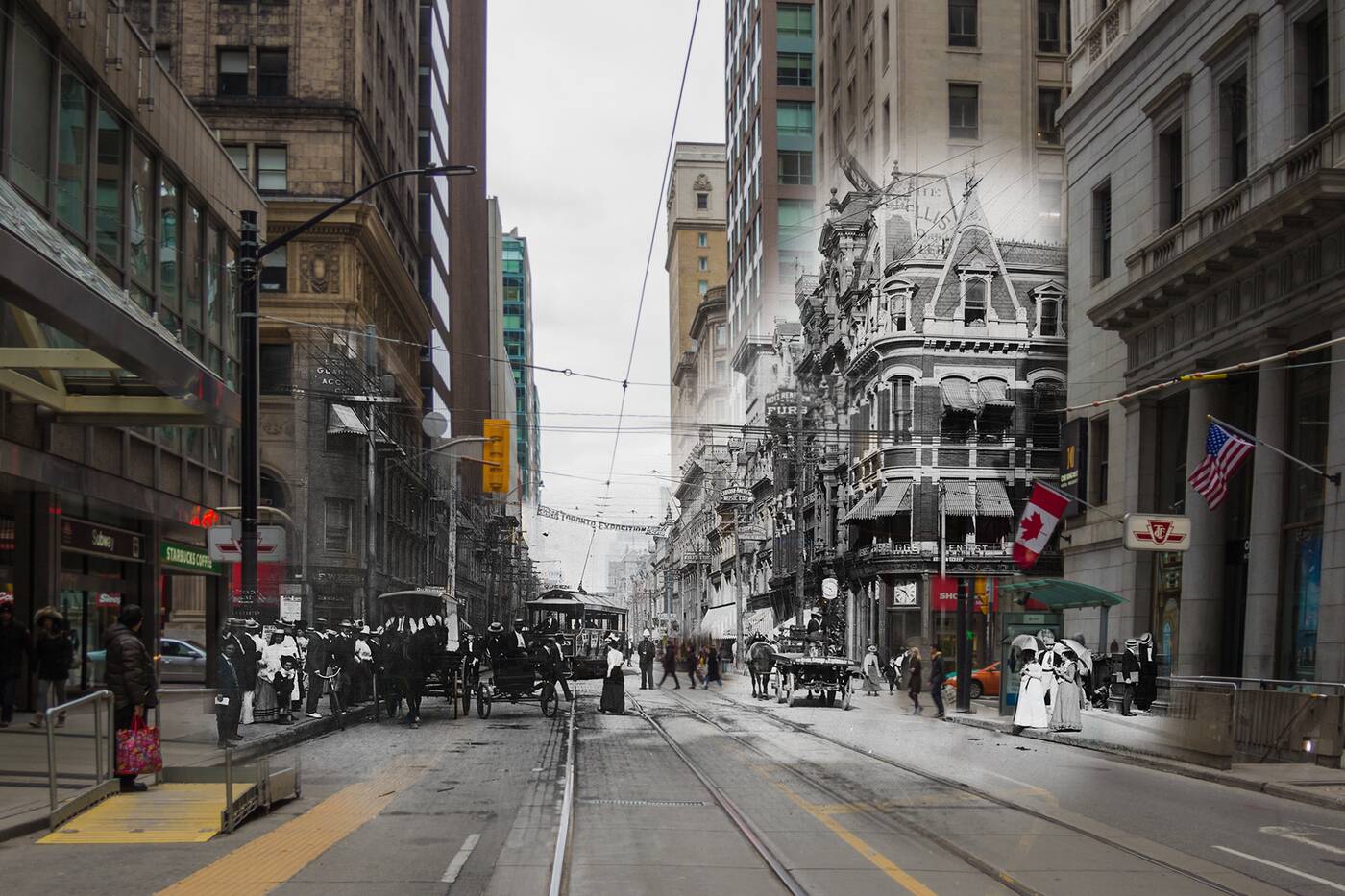 The intersection of King and Yonge Streets - notice a banner over the street announces this as the Toronto Exposition of August 1904. 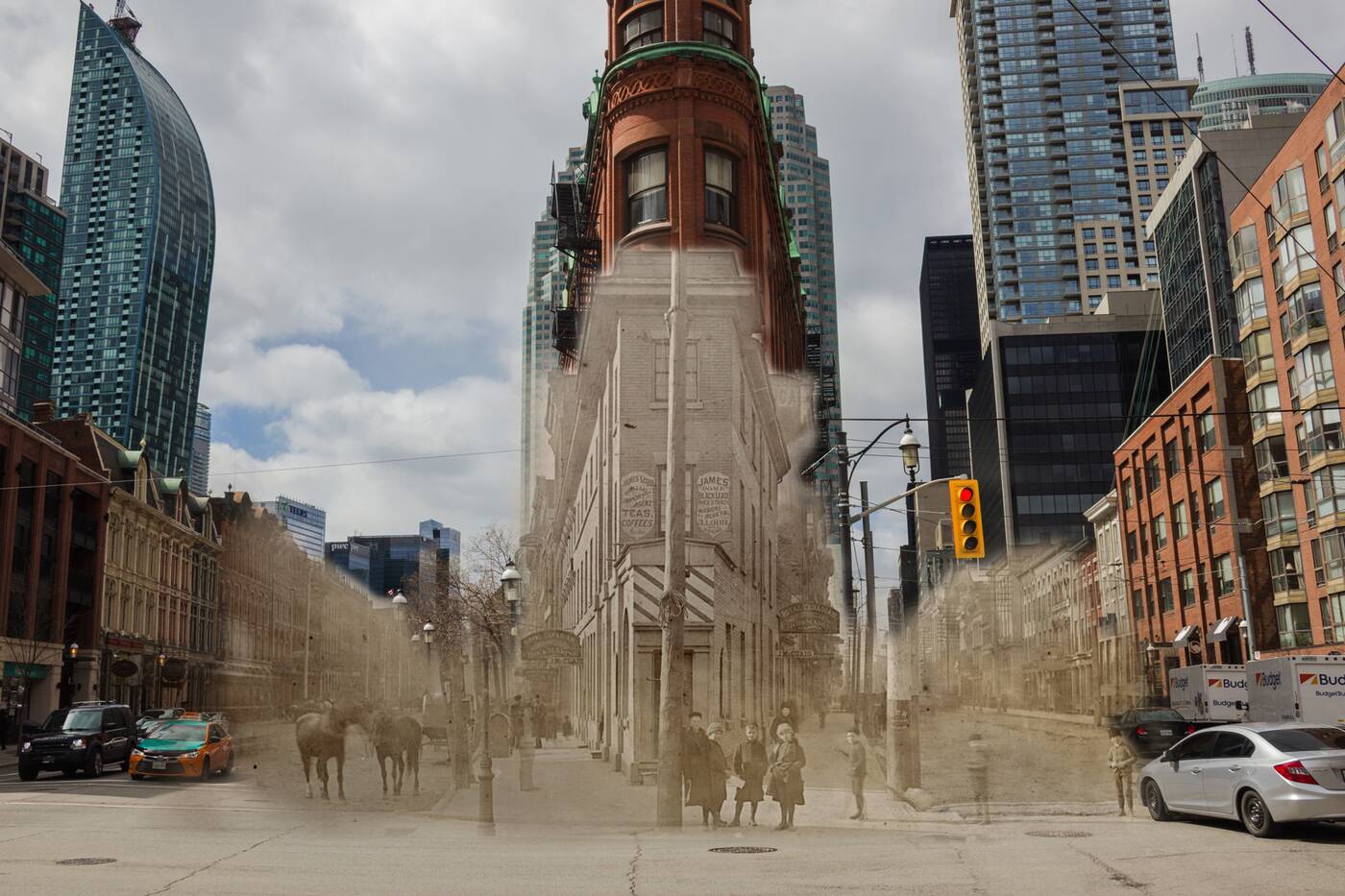 Boys stand in the street in front of the Coffin Block in 1888, now the Flatiron building on Front Street.

"It is a really fun and fascinating history," Farris says. 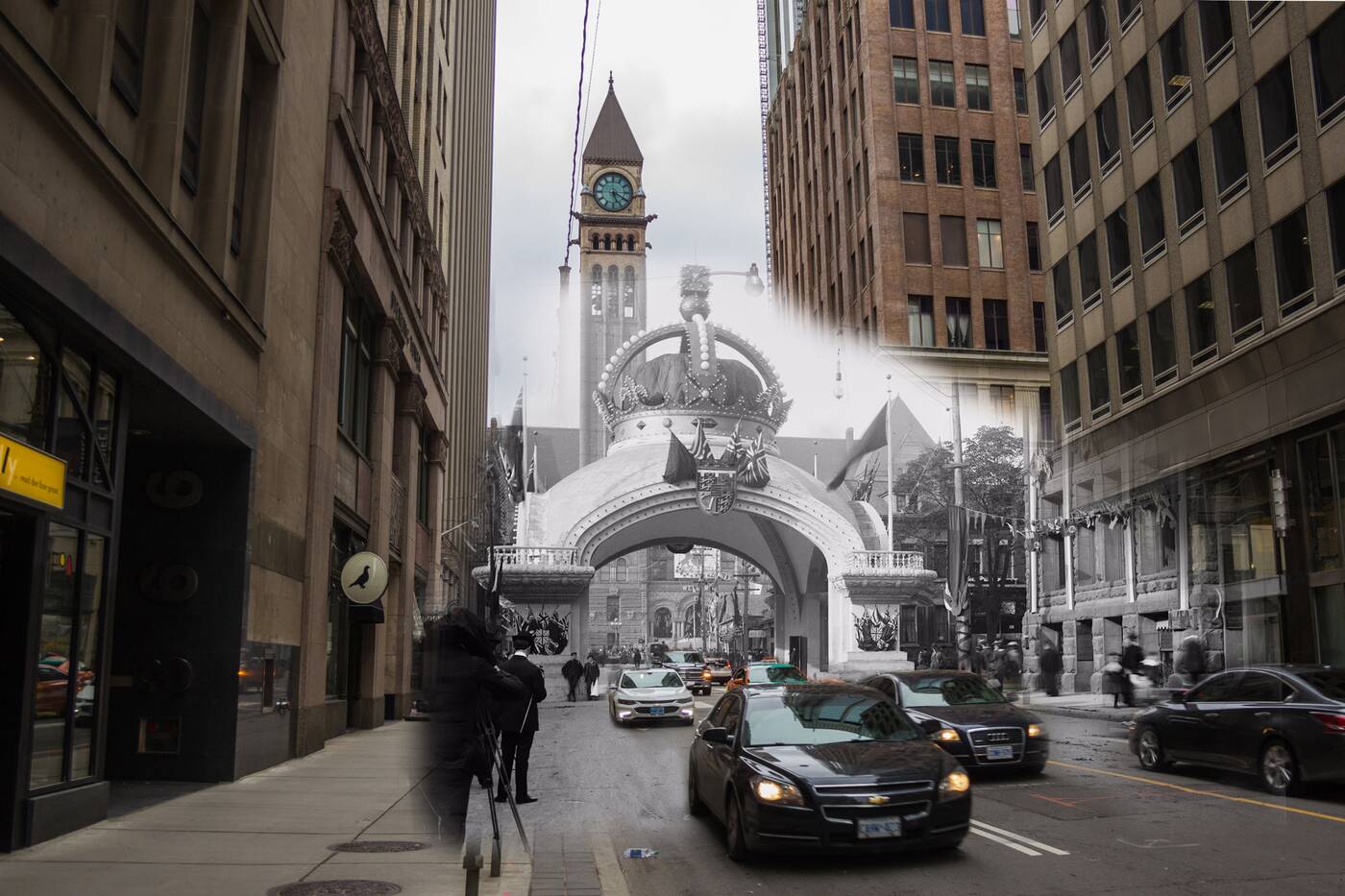 An extravagant arch was built along King George V's parade route during his visit to Toronto in 1901. A cameraman in the left of the photo has a hood over his head as he prepares to take a photograph.

The company has tours in about 70 cities across Canada. Usually, they look for a collection of historic photos and reshoot them in the same location. 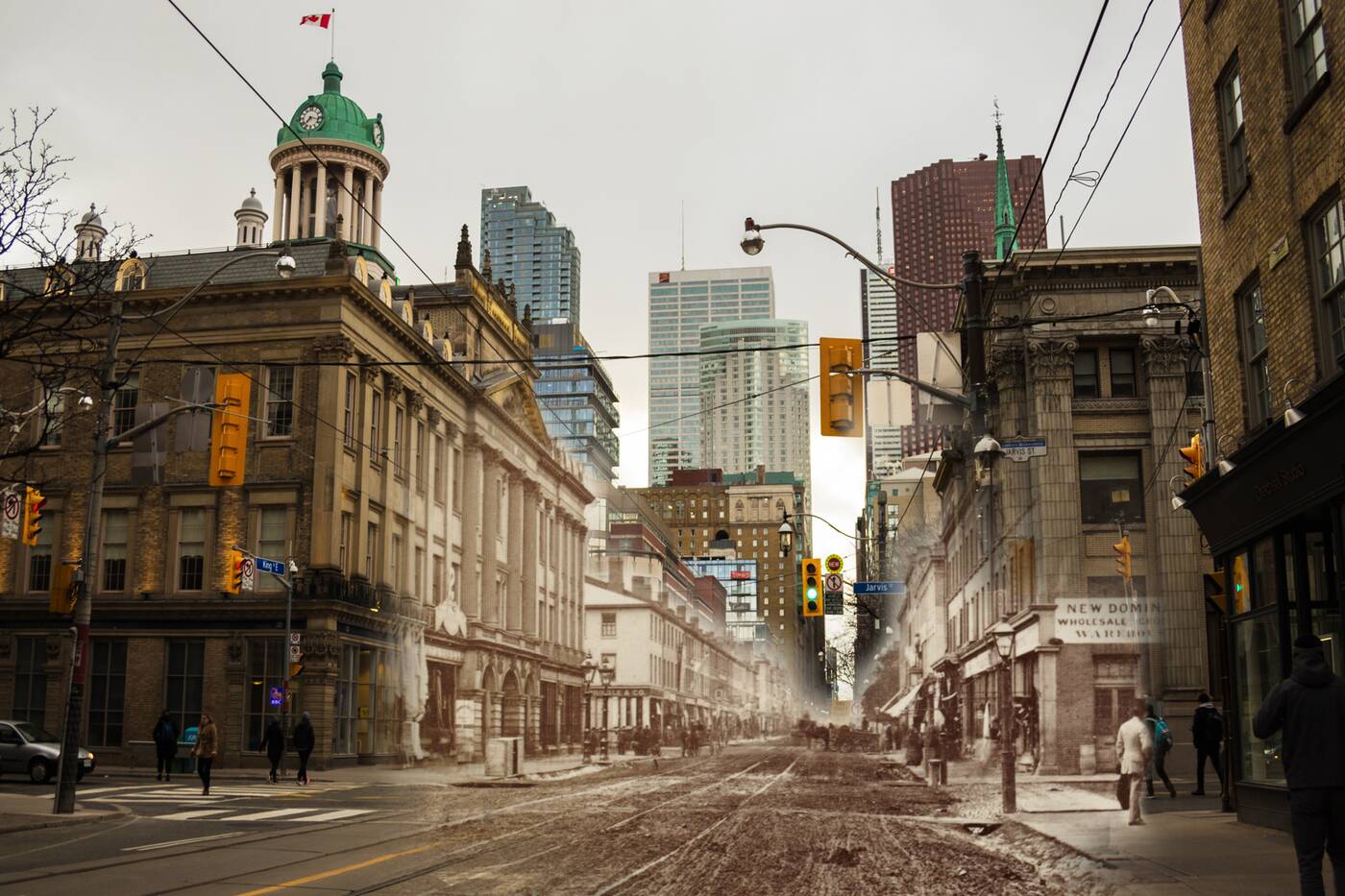 A view down King Street in 1868 showing the neoclassical St. Lawrence Hall on the left.

"So you are standing in the footprints of that historic photographer," Farris says. 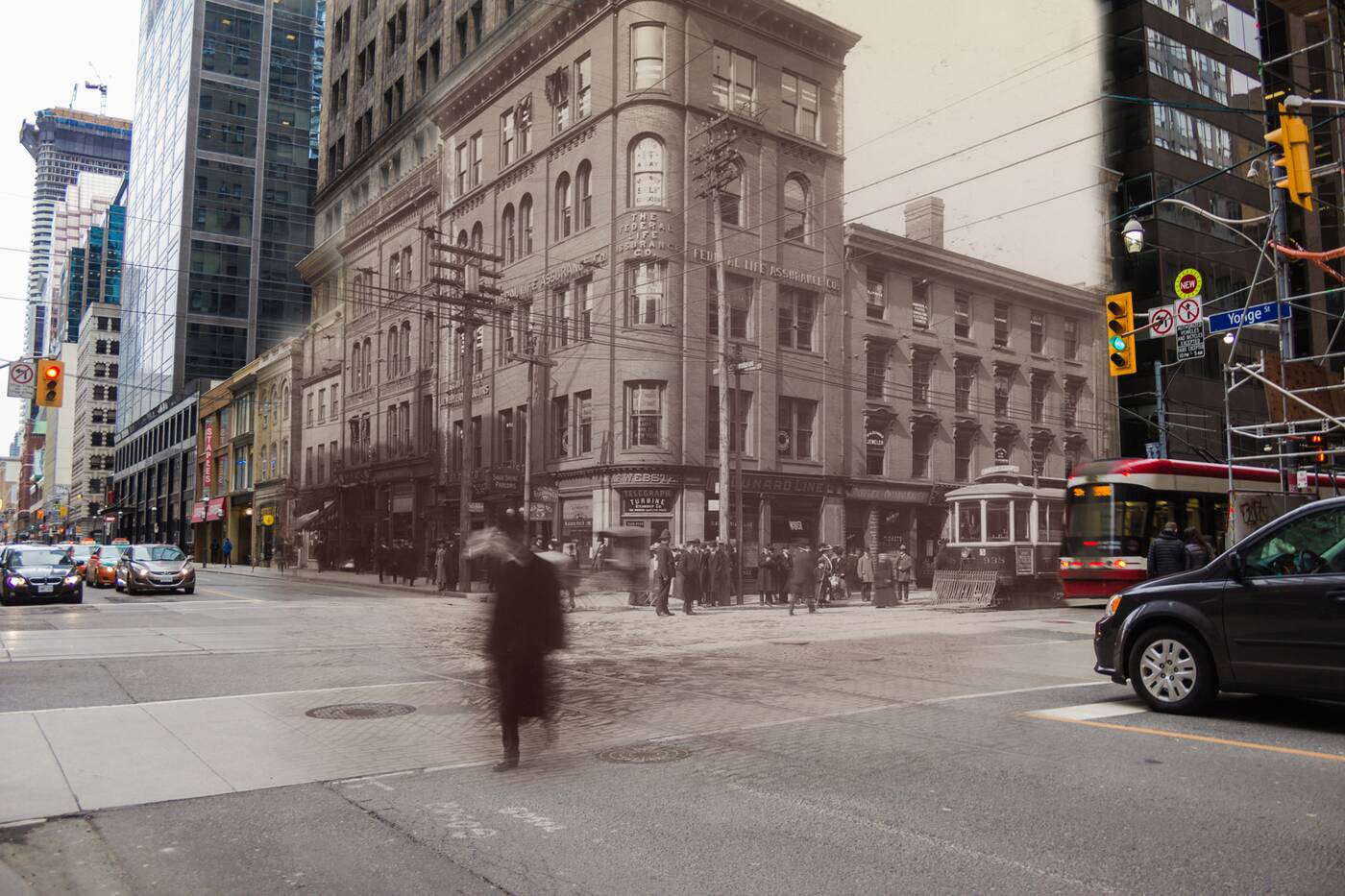 The intersection of King and Yonge is filled with people in 1907.

Then they map out the locations of the best photos, write a few paragraphs of detailed historical information and people can follow along on the app as they walk. 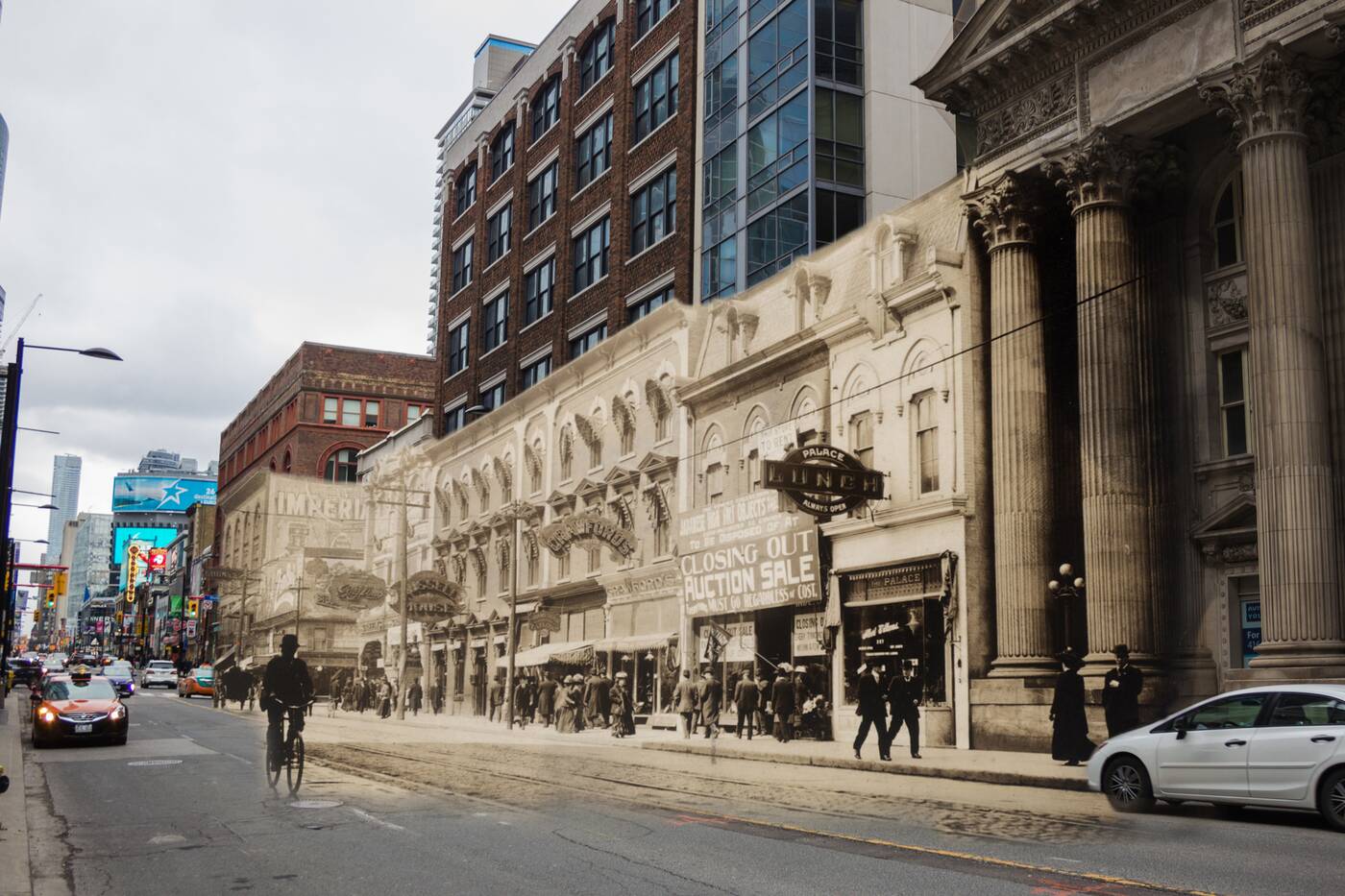 The sidewalk on Yonge Street on a busy day in 1907. One of the businesses selling Japanese art is having a closing out sale.

"We are a history company that does technology."

Farris says he started the project in 2016 with his friend Chris Reid, co-founder and chief technology officer, after taking a backpacking trip through Europe and doing then and now photography at historic battlefield sites. 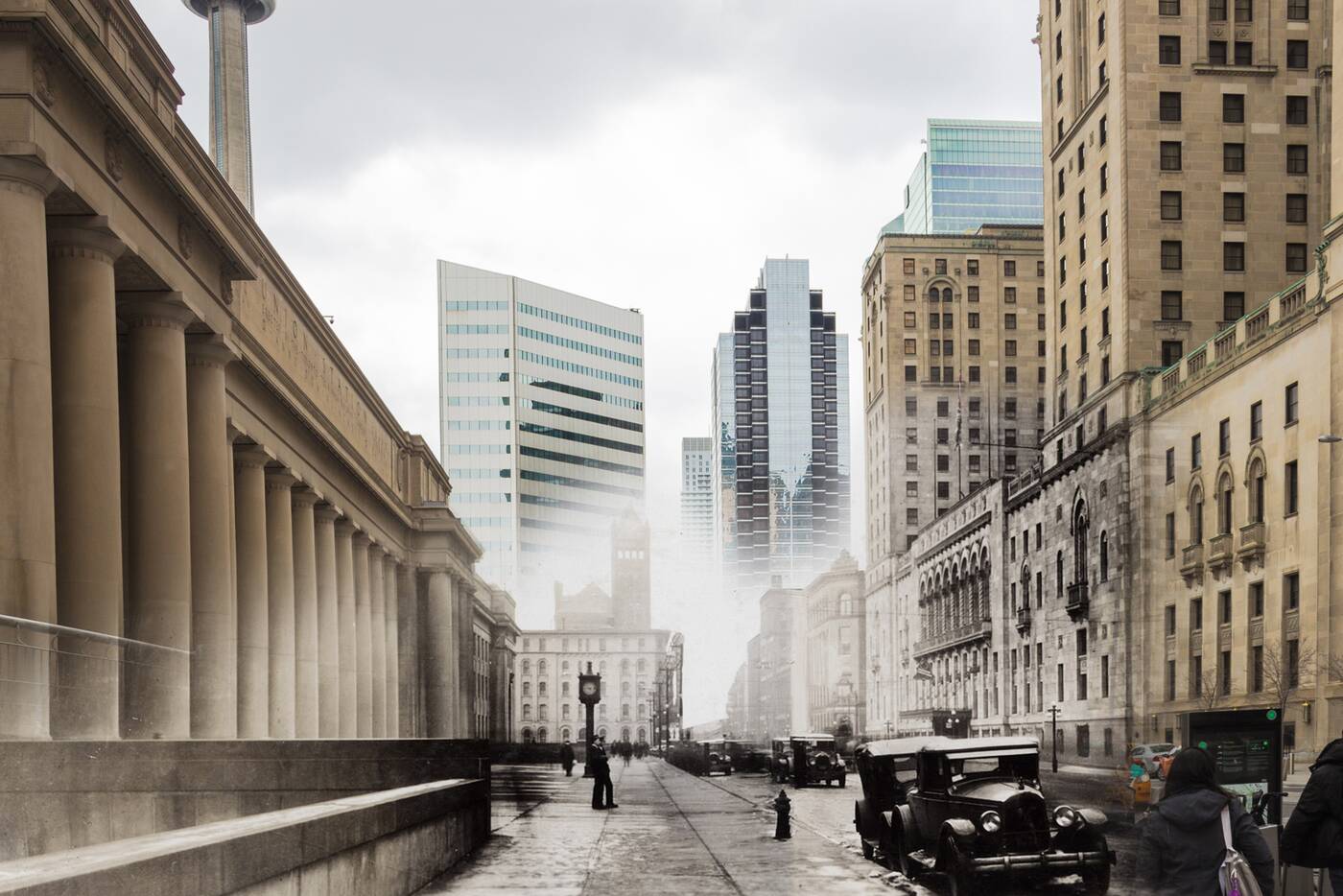 Union Station in the 1920s is seen in this blended photo.

Coming soon is a Chinatown tour in partnership with the Chinatown BIA to mark Asian Heritage Month in May. 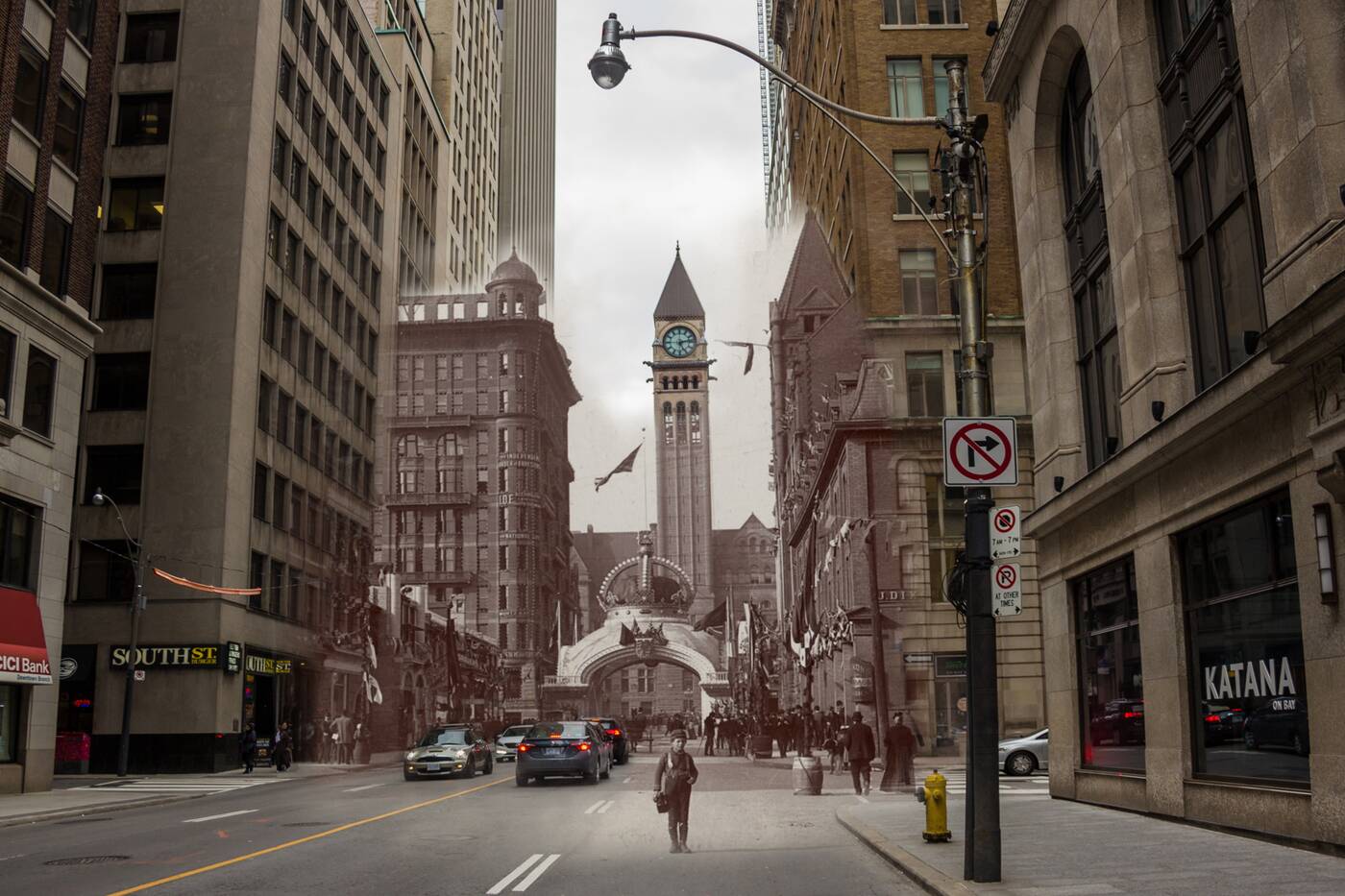 A boy stands in Bay Street in front of an elaborate crown arch erected to mark the visit of King George V in 1901.

The tours and content is free to look at and Farris says they partner with tourism agencies, BIAs and local governments to fund the projects but really it is a labour of love.

"It is a passion project."

A previous version of this post had the incorrect information for the King Street photo with the Toronto Exposition banner.

via On This Spot, King Street and Yonge Street in 1912 superimposed with today