Ontario residents Kimberly Fishman and Mitch Potashner had to modify and postpone their wedding plans several times throughout the past year thanks to ongoing pandemic-related restrictions, but they were finally able to have the wedding of their dreams last month at an incredibly special venue.

The couple was set to have a small backyard wedding on April 25 so guests could safely practice physical distancing outdoors, but when the provincial regulations changed to allow for a maximum of 10 attendees at weddings and/or drive-in and virtual services, they had just one week to come up with yet another new plan.

"I don't even remember how I thought of it," Fishman tells blogTO, "but knowing how geographically close it was to where we live and how much we all love the show Schitt's Creek, I said to my parents and Mitch, 'My dream would be to get married at the Rosebud Motel.'" 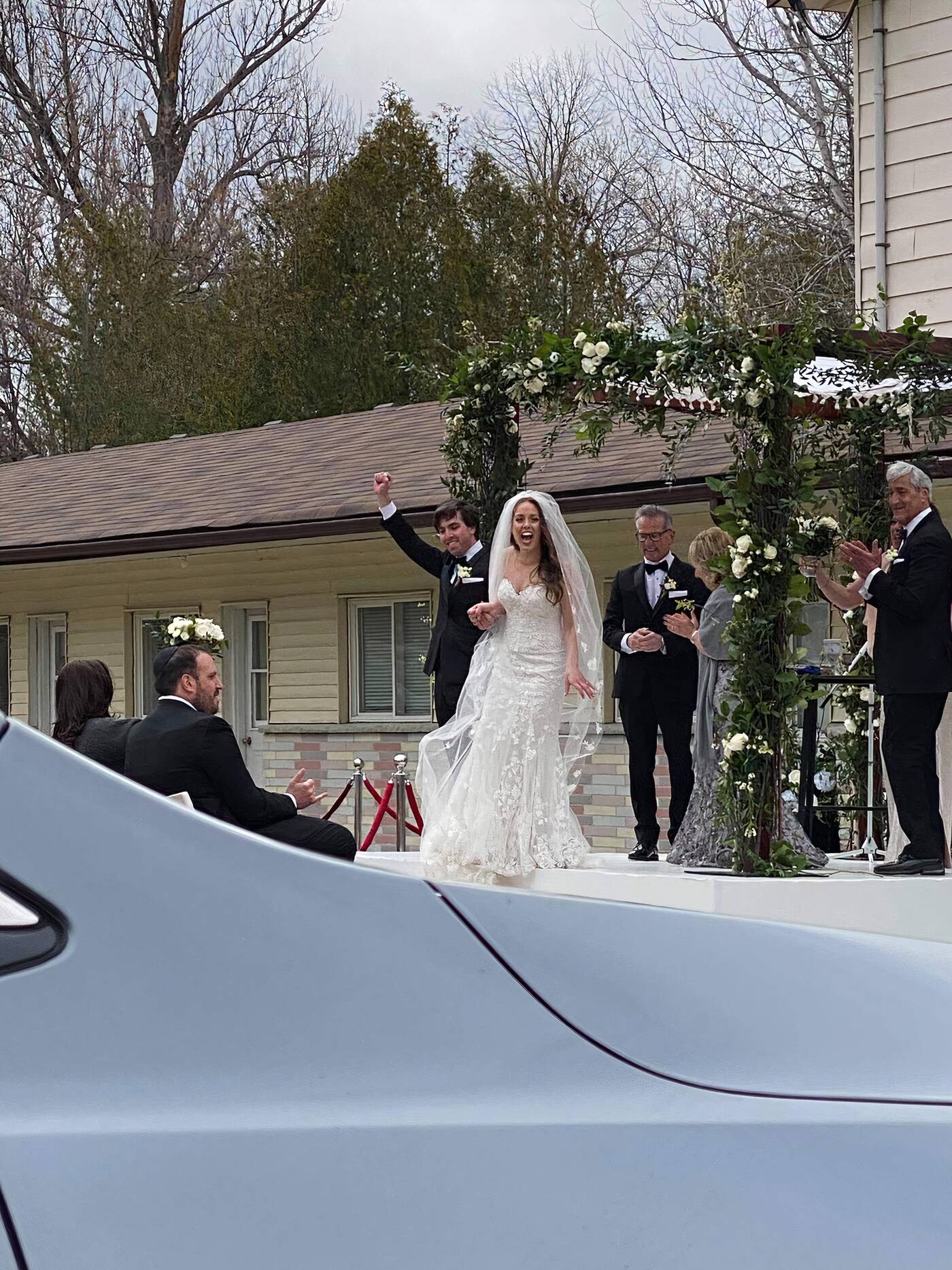 Kimberly Fishman and Mitch Potashner got married outside the Rosebud Motel on April 25.

Fishman and Potashner were both born in Thornhill but now reside in Maple, Ont. together — a roughly 45-minute drive from the famous Schitt's Creek motel in Orangeville, Ont.

So, for one day only, the beloved establishment became the Fishpot Motel (a combination of their last names) for an unforgettable pandemic wedding, organized by Fab Fête Event Planning.

The "Fishpot Motel" sign, which is a combination of the newlyweds' last names, was created by Event Graffiti.

"Never in a million years did I think I would get married in formal attire in a motel parking lot, but what an amazing experience it was!" Potashner says.

To keep things as safe as possible, Fishman says most guests watched the ceremony virtually, while some guests watched from their cars and a total of 10 people had chairs set up in the parking lot.

During their first dance as a married couple, both sets of parents surprised the bride and groom by dressing up like Moira and Johnny Rose from the series. 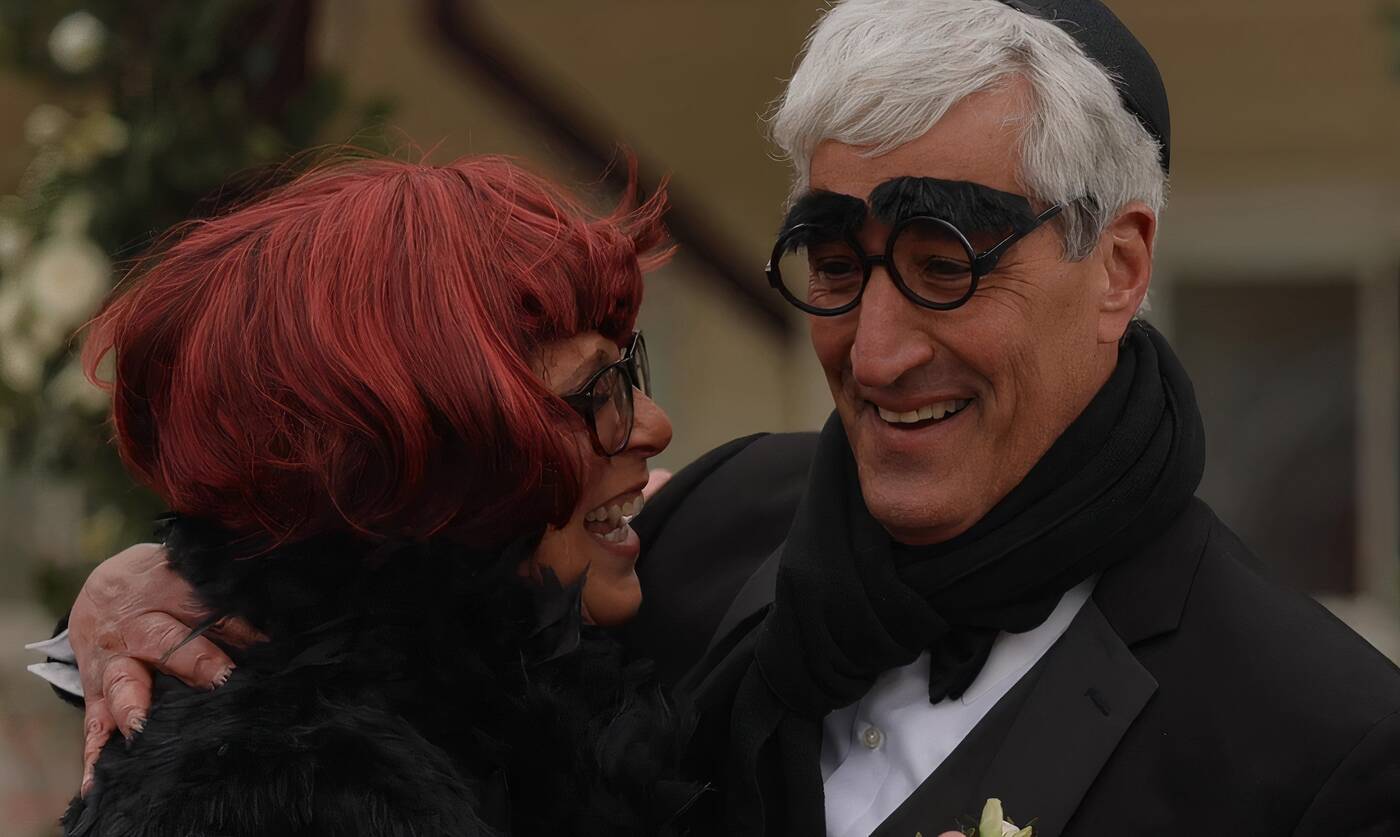 Both sets of parents surprised the couple by dressing up as Moira and Johnny Rose from Schitt's Creek.

And later, the couple received a surprise congratulatory message from Dan Levy himself — orchestrated by the owner of the motel.

Dan Levy sent a congratulatory message to an Ontario couple who got married at the motel from Schitt's Creek - 📹 Kimberly Fishman #Ontario #Wedding #DanLevy #SchittsCreek pic.twitter.com/vpVStZh7Ak

"I didn't think it was possible for the day to get any better until I was surprised with the video message," Fishman says. "I absolutely love and admire Dan Levy and was so thrilled to have him as part of the day."

The newlyweds finished watching all six seasons of Schitt's Creek a few months ago, and they say it brought them plenty of joy, smiles and laughs, all while communicating "invaluable" messages about what is really important in life.

"I liked the show so much that when we were done watching it, I started painting a Schitt's Creek-themed painting," Fishman says. "When we decided to have the wedding at the motel, I was determined to finish the painting in time for the big day!" 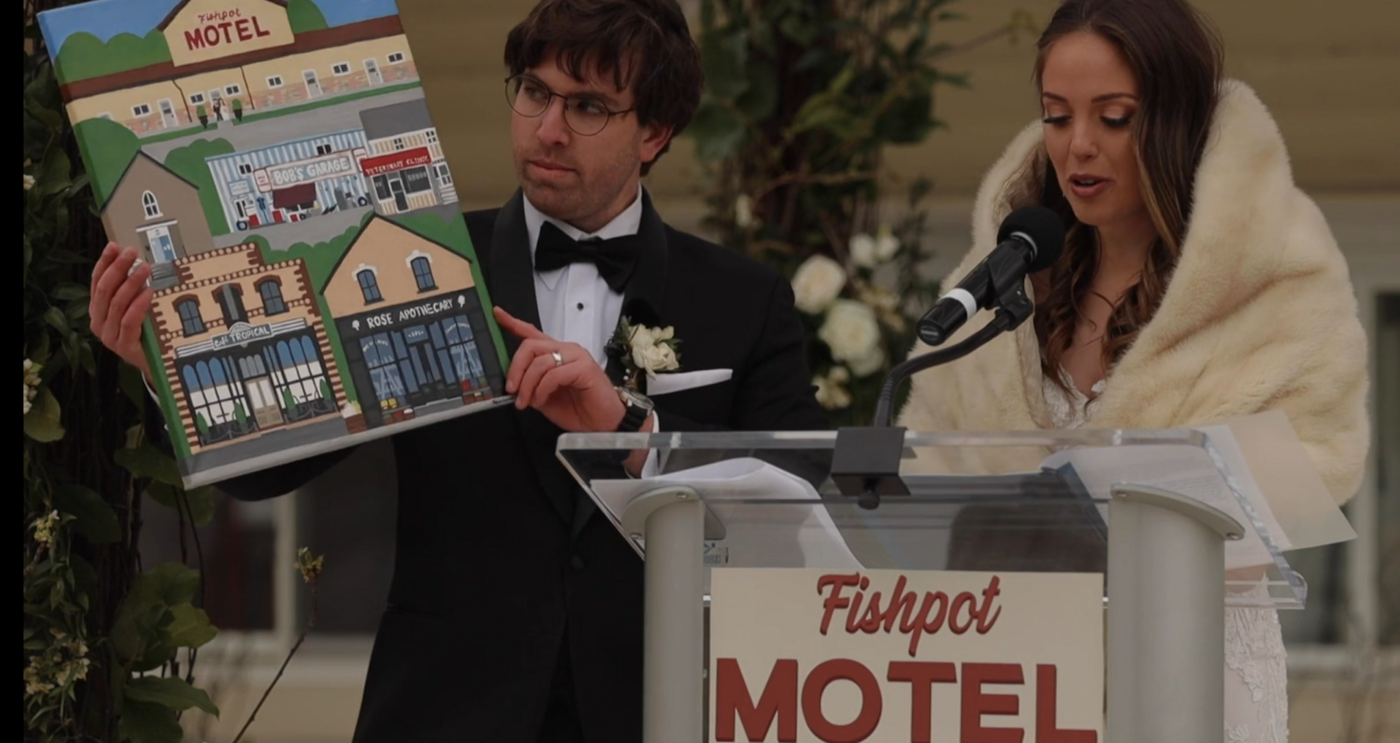 Fishman completed her Schitt's Creek-themed painting just in time for the wedding.

She accomplished that goal, and the painting was put on display for all to see.

"Throughout the wedding, locals were excited to take pictures and cheer us on as they drove by and some even posted on social media about how brilliant the concept was," Fishman says. "One local neighbour even dropped off a bottle of champagne for us."

Fishman says the wedding turned out better than they ever expected.

So while this Ontario couple's wedding wasn't anything like what they initially expected of their big day, in the end they say it was even better than they could have imagined — with many guests describing it as the best wedding they'd ever experienced.

"While the pandemic has been an incredibly difficult time for everyone, we decided early on to focus on what we did have, rather than focusing on what we don't have or can't do anymore during these unprecedented times," Potashner says.

"When it came to wedding planning, this mindset helped us stay positive, expand our comfort zone, get creative and ultimately played a major part in the success of our big day."