The baby foxes living under Toronto's Beaches boardwalk have been killed

Toronto residents living in the Beaches neighbourhood have been blessed to get to witness the growth of a family of foxes who have decided to make a den under the boardwalk at Woodbine Beach for the second year in a row.

People became absolutely obsessed with the critters last spring when they made the area their home, an event that was part of a larger phenomenon of wild animals — foxes in particular — getting spotted around the city while it was quieter due to pandemic lockdown.

Even after streets became busier once more, the creatures appeared to stick around, unfortunately often to their detriment.

Despite the best efforts of volunteers to protect the fox family in the beaches last April, one of the babies ended up dying after it was attacked by a predator — most likely someone's dog, concluded the Toronto Wildlife Centre (TWC).

And, just like many had feared, this year's pups have met a similarly tragic fate.

This breaks my heart 😞

"It is with heavy hearts that we announce two fox kits were sadly found dead early this morning in an area close to the Beaches Boardwalk fox den," TWC, which helps save and rehabilitate animals across the region, wrote in Facebook and Twitter posts on Saturday.

"There is currently no evidence to suggest this past week's acts of vandalism were directly linked to the death of the kits."

The vandalism in this case was the suspicious and deliberate damage of a camera the registered charity had placed to monitor the foxes, which TWC wrote about in a separate social media post just one day before the babies were found dead.

Hundreds of citizens have expressed their outrage and anguish at the situation, with many wondering why humans can't seem to leave nature be and wondering whether the family can be safely relocated in future seasons. 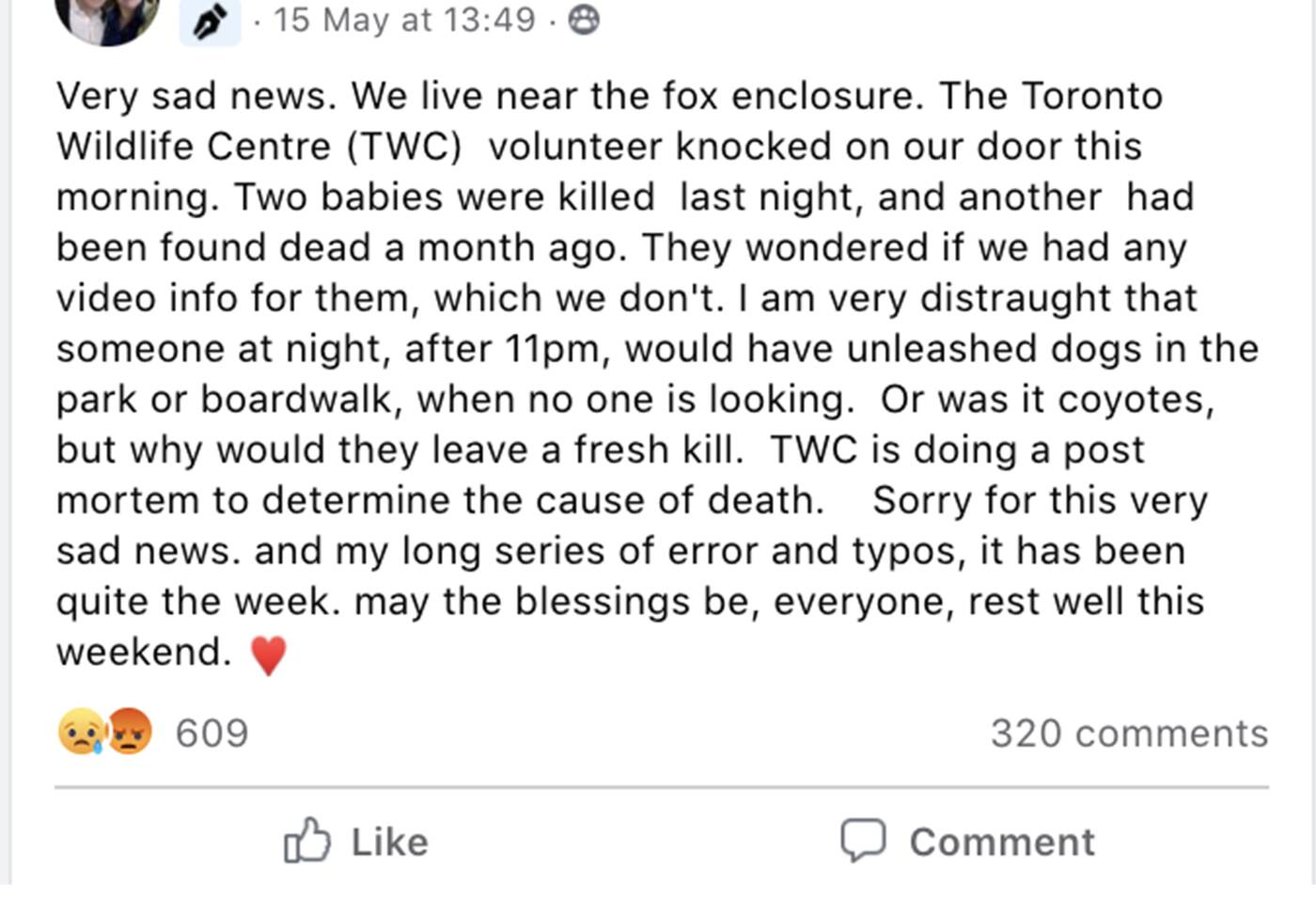 Another post about the devastating news that received tons of traction in a local community Facebook group. The Beach(es), Toronto/Facebook.

Last year, advocates went to the extent of setting up fencing and sending bylaw officers to patrol the area where the foxes were living to try and keep people and their pets away from the trio, but volunteers were repeatedly harassed and threatened — which escalated this year to the vandalism of the camera and even the nearby home of a volunteer.

The death of the pups is currently being investigated, and TWC will be posting an update as soon as they know any additional information.