Have you ever received one of those popular prepaid Visa"Vanilla" gift cards as a present? Or purchased one last-minute for someone whose birthday you spaced on?

It doesn't matter if you bought one or were given one, and no proof of purchase is required to enter a claim, but you must have lived in Ontario at the time and obtained the card as a "consumer" (business gift card buyers are excluded from the class.)

"If you got one of these cards as a gift from your grandparents, submit your claim and help your grandparents submit their claim too," said Toronto lawyer Jonathan Schachter of Sotos LLP to blogTO on Thursday, noting that his firm believes hundreds of thousands of people lost money on these cards.

"Depending on the type of card, some claimants could receive $100 or more." 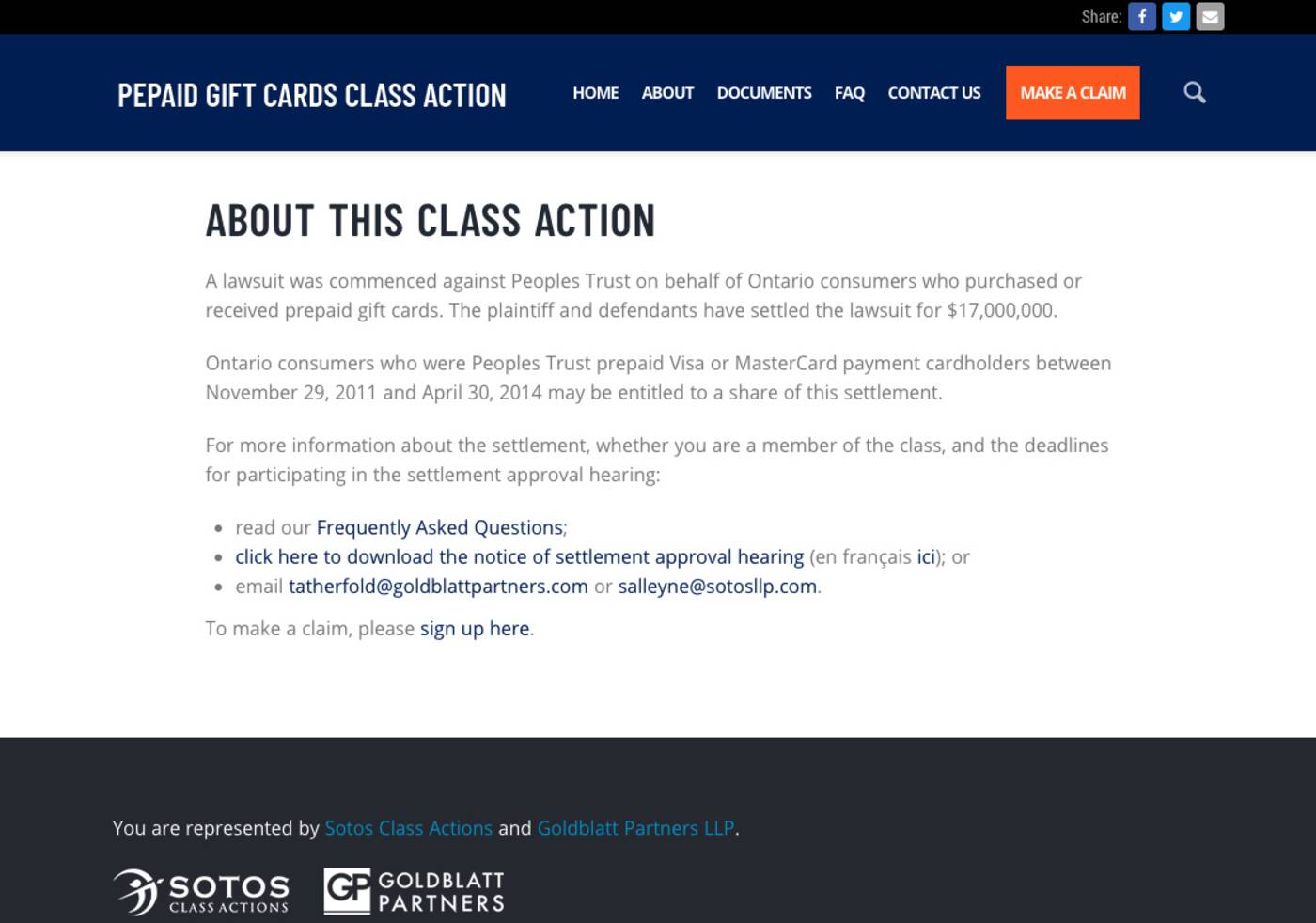 A dedicated website has been set up for eligible gift card users to join the class action claim. Image via giftcardsclassaction.ca.

Cards covered in the claim, as publicized this week, include Vanilla VISA and MasterCard as well as Titanium+ Prepaid Cards bought between Nov. 29, 2011 and April 30, 2014.

These slick pieces of plastic were all the rage in Ontario at one point, and are still wildly popular, mostly thanks to their ubiquitous presence at supermarket and drug store checkouts.

Billed as an easy gift that allows recipients to buy whatever the heck they want (as opposed to say, a card that forces them to go shopping at Lululemon or Indigo,) they're great in theory, but come with some serious downsides.

First, cardholders are tasked with keeping track of their gift card balances — cashiers can't check it for them, and the card will be rejected for any purchase higher than the existing balance.

This has resulted in many people turning to Vanilla's website over the years to check their own balances... only to find out that their cards had been drained right down to zero.

As it turns out, a tiny, little-known clause in the purchase agreement for these cards specified that a certain portion of the balance would be deducted each and every month, starting one month from the date of purchase.

Alright: who hacked my brother's gift card? It was a VISA Vanilla: had $100 on it. He already spent a bit on Oculus games, but he still had about $44 left. He comes back today and finds that his balance is 0, and was used for something he never paid for. Who did it?

In other words, if you Ontarians didn't spend the entire balance of their gift cards pretty much right away, they'd likely lose at least some of it to a Canadian financial services company called Peoples Trust.

A lawsuit was commenced against Peoples Trust Company and Peoples Card Services LLP on behalf of Ontario consumers in 2013 by Toronto epidemiologist Joyce Bernstein, who herself had been burned by one of these cards and their fast-disappearing balances.

"The class action alleged that, during the class period, cardholders were charged fees in excess of what was permitted under Ontario law and the cards had expiry dates that led to cardholders losing the unused balance on their cards."

After years of back and forth that included a Superior Court of Justice ruling in favour of the plaintiff, followed by an appeal from the defendant, both parties "reached an agreement" to settle the case.

Defendants ordered to pay punitive damages and repay illegal gift card charges in a big win for Ontario consumers. Delighted to have been part of the @classactionscan (& @GPLLP) team on this case! https://t.co/4GON1BtQUX #consumerprotection #classactions

The settlement was approved by a judge in September of 2020 and all eligible Ontarians now have until June 4, 2021 to make a claim.

"The settlement will be divided among people who submit claims. It all depends on how many people submit claims," said Schachter when asked how much individuals could expect.

And if the money goes unclaimed?

"If we do not receive enough claims from consumers, the court may decide to get creative with the settlement money by directing a donation to a cause that benefits consumers," says Schachter.

"The court would prefer to compensate those consumers directly... We hope there are enough claims to give meaningful compensation to as many Ontarians as possible."