Getting to work in the morning is challenging enough as it is for the bleary-eyed downtown dwellers who are forced to commute with thousands of other people through jam-packed roads, sidewalks and public transit vehicles. Every. Single. Day.

Throw in some road work or light construction and things get even worse. Start building condo towers on all four corners of the same intersection at once, and the frustration intensifies.

Have a private construction worker halt pedestrians, motorists and cyclists in their tracks, en masse, during rush hour, for 10 minutes at a time, with no police presence, to hoist some stuff high above the street with a crane? That's a full-on act of war .

At least twice this week so far, commuters leaving Liberty Village — a densely populated neighbourhood comprised mostly of young professionals — have had their commutes significantly delayed on account of condo construction.

This isn't a new phenomenon, with multiple active construction sites in place around the neighbourhood — four of them at Strachan and East Liberty Street alone.

What's unusual is that construction workers — not cops — are fully blocking hundreds of commuters at a time from accessing the roads and sidewalks they need so that work can be done overhead. At rush hour, no less.

No cops, East liberty just closed once again at Strachan by construction workers, like every day. No cops, traffic backed up north of King. When do we get a break from living in a construction site @joe_cressy? pic.twitter.com/JPgchuzyZn

Cars were backed up both north and south of East Liberty on Strachan Avenue Wednesday morning as people in orange vests held up their hands and yelled at pedestrians and motorists to stay put in both directions.

Dozens of commuters on foot and bike were forced to stand still as workers tried to figure out what was going on with a crane atop CentreCourt's new Zen King West building. 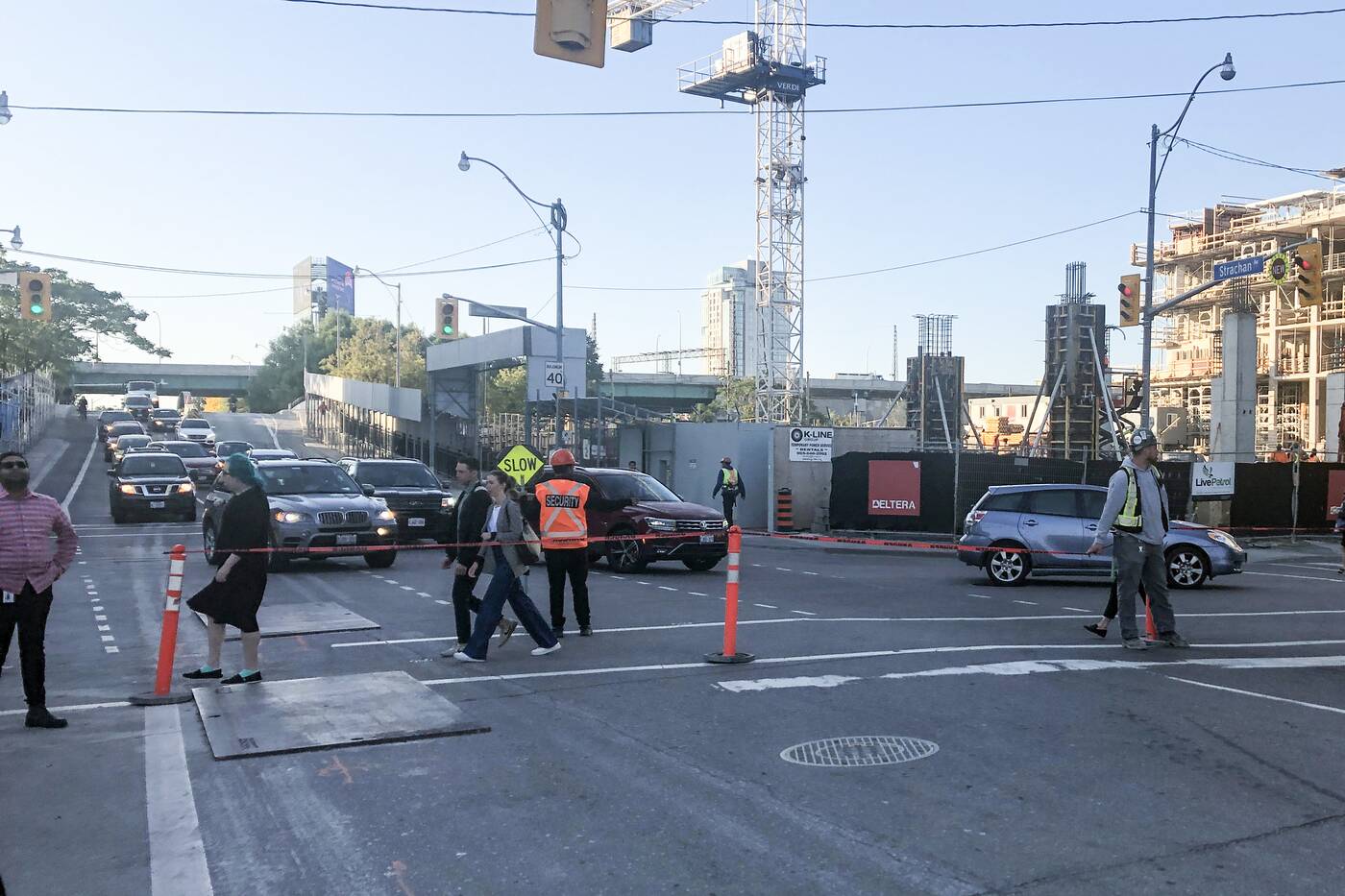 Eventually, a large wooden panel of some kind was lifted into place atop the fast-rising condo tower. When workers were satisfied that there was no risk of anyone below being injured, they gave the waiting citizens permission to move once again. 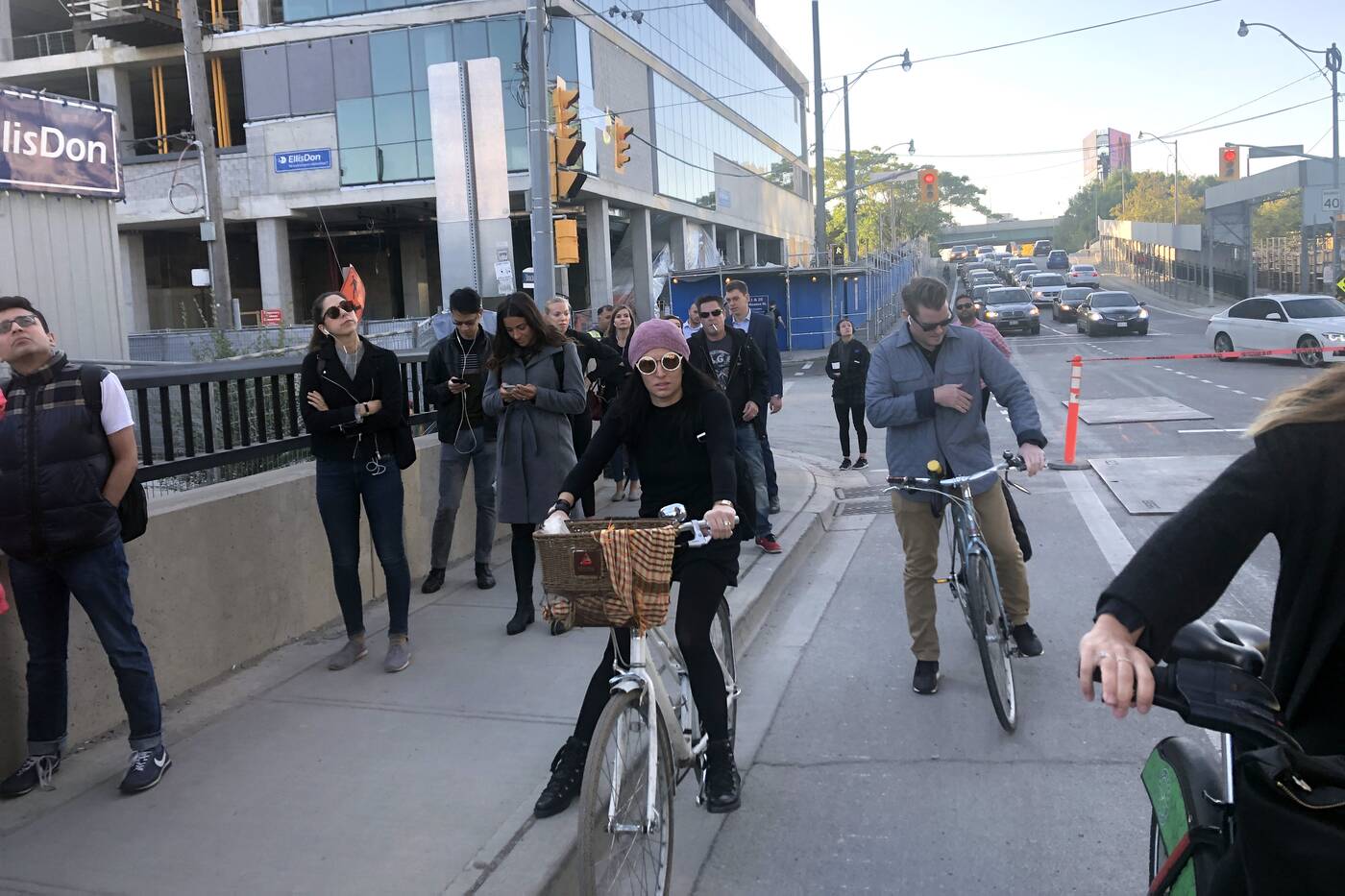 Companies that, like CentreCourt, plan to occupy any area beyond the lines of their own property for construction purposes can apply for a Street Occupation Permit through the City of Toronto.

"For street, sidewalk and/or public lane closures, a detailed letter outlining how the public right of way is to be used, including the duration of the closure, together with a proposed work schedule, must be submitted with your application," reads the city's permit website.

The project that workers stopped traffic for at 19 Western Battery Road on Wednesday does have a conditional new building permit for a 31-storey mixed-use structure. 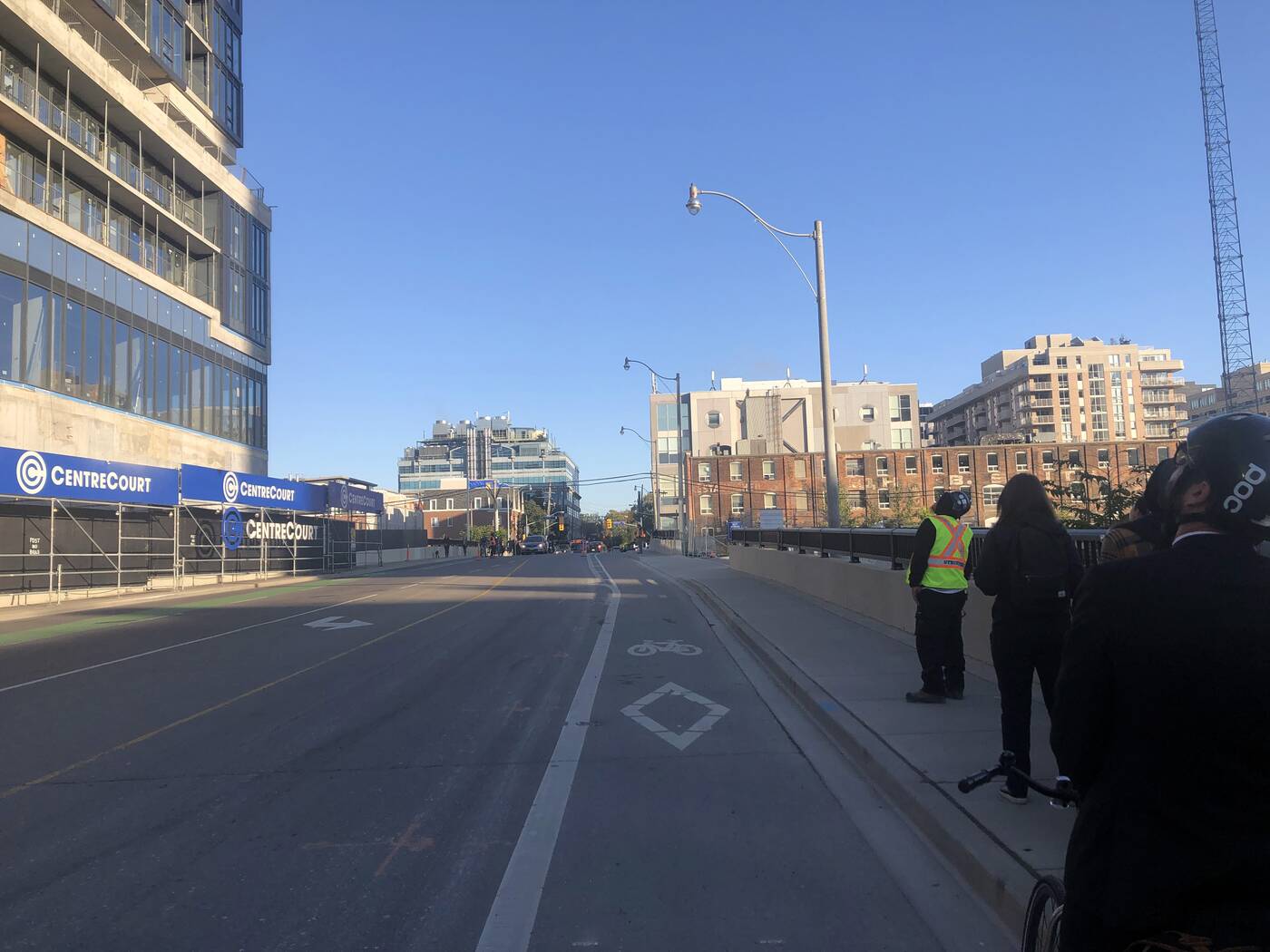 The city's building permit status registry does not show an active Street Occupation Permit for the project, though this doesn't necessarily mean that CentreCourt's builders didn't get one.

If the multi-billion dollar development firm did get such a permit for the street closure, it would have cost them as little as little as $29.24 per square metre a month.