At least 582 people have been injured in shootings so far this year across the City of Toronto — 587, if you count the five teens who were shot last night near Eglinton and Keele.

Last year at this time, the number of shooting victims on record to date was 451.

That's 130 more people who have been injured by guns so far this year between January and November, according to police data.

Shooting deaths are down, but the number of shooting incidents have spiked over the same time period, from 341 in 2018 to 395 as of Monday, October 28, 2019, which is when Toronto Police last updated their public safety data portal. 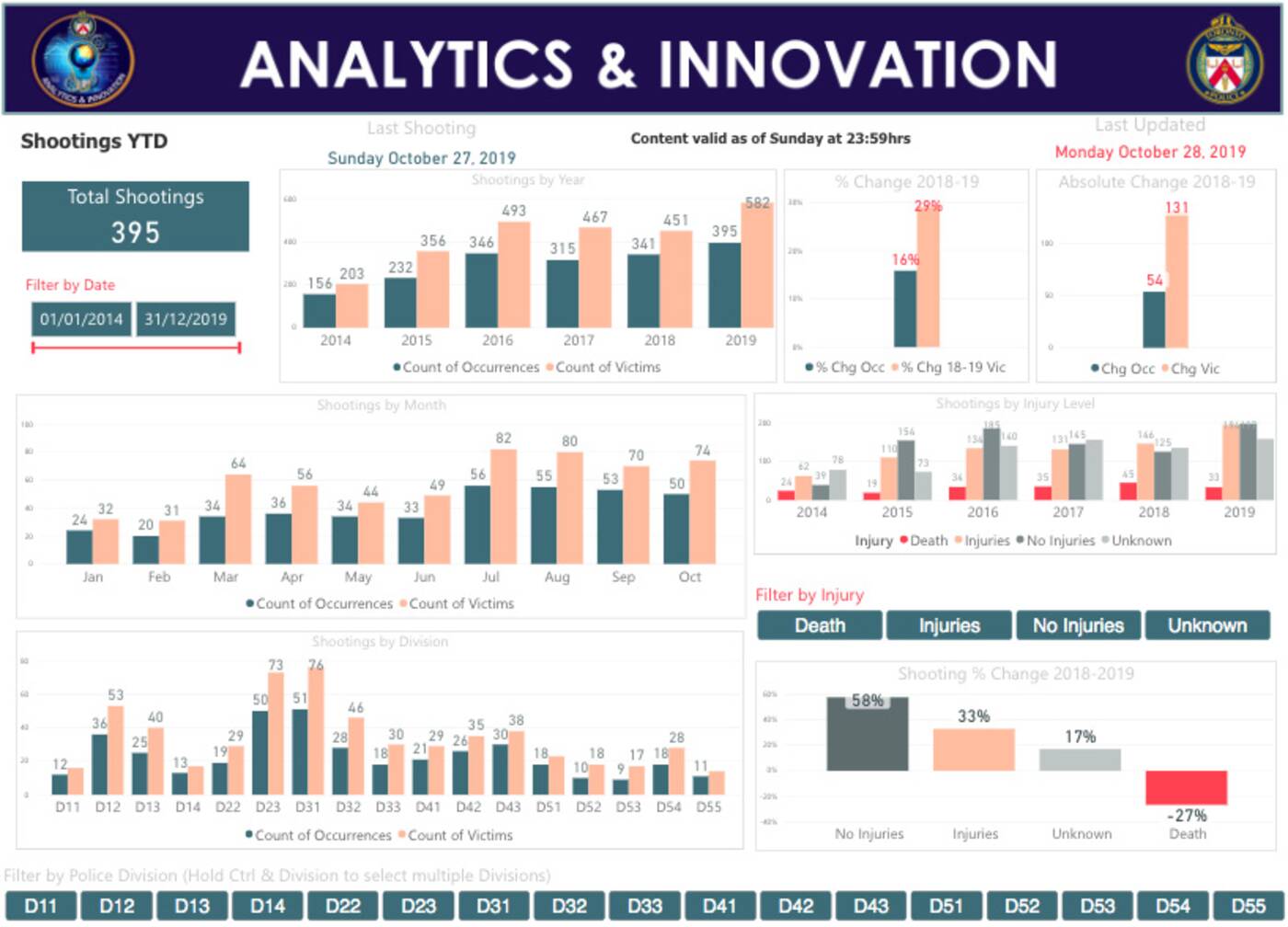 There have been 395 separate shootings in Toronto since January of 2019. Last year at the same time, there had been 341. Image via Toronto Police Public Safety Data Portal.

It's no secret that gun violence has been on the uptick in recent years, but incident numbers are rising so fast that even law enforcement officials are flabbergasted.

Toronto Police Chief Mark Saunders spoke to the problem (again) in a press conference on Wednesday night, not long after five people — two girls, ages 16 and 17, and three boys between the ages of 16 and 18 — were sent to hospital with (non-fatal) gunshot wounds from an apartment building on Clearview Heights Road.

Saunders told reporters that the shootings were "targeted" and that the case is "very solvable."

The gun violence problem in general, not so much.

"I haven't seen this number before," said Saunders of Toronto's current year-to-date shooting count. "We're actively doing our part and making the apprehensions."

Even with only 10 months logged into the year so far, the number of shootings that had taken place in Toronto as of Monday was more than double what we saw during the entirety of 2014.

If 2019 is anything like 2018, the number of victims will spike in November and December, bringing us well past last year's grand yearly total of 613 people who were injured in 428 separate shootings.

Scary figures, for sure, but there's good news when it comes to our homicide rate, which is down roughly 33 per cent (27 per cent for shootings, specifically) after reaching a nearly 30-year high in 2018. 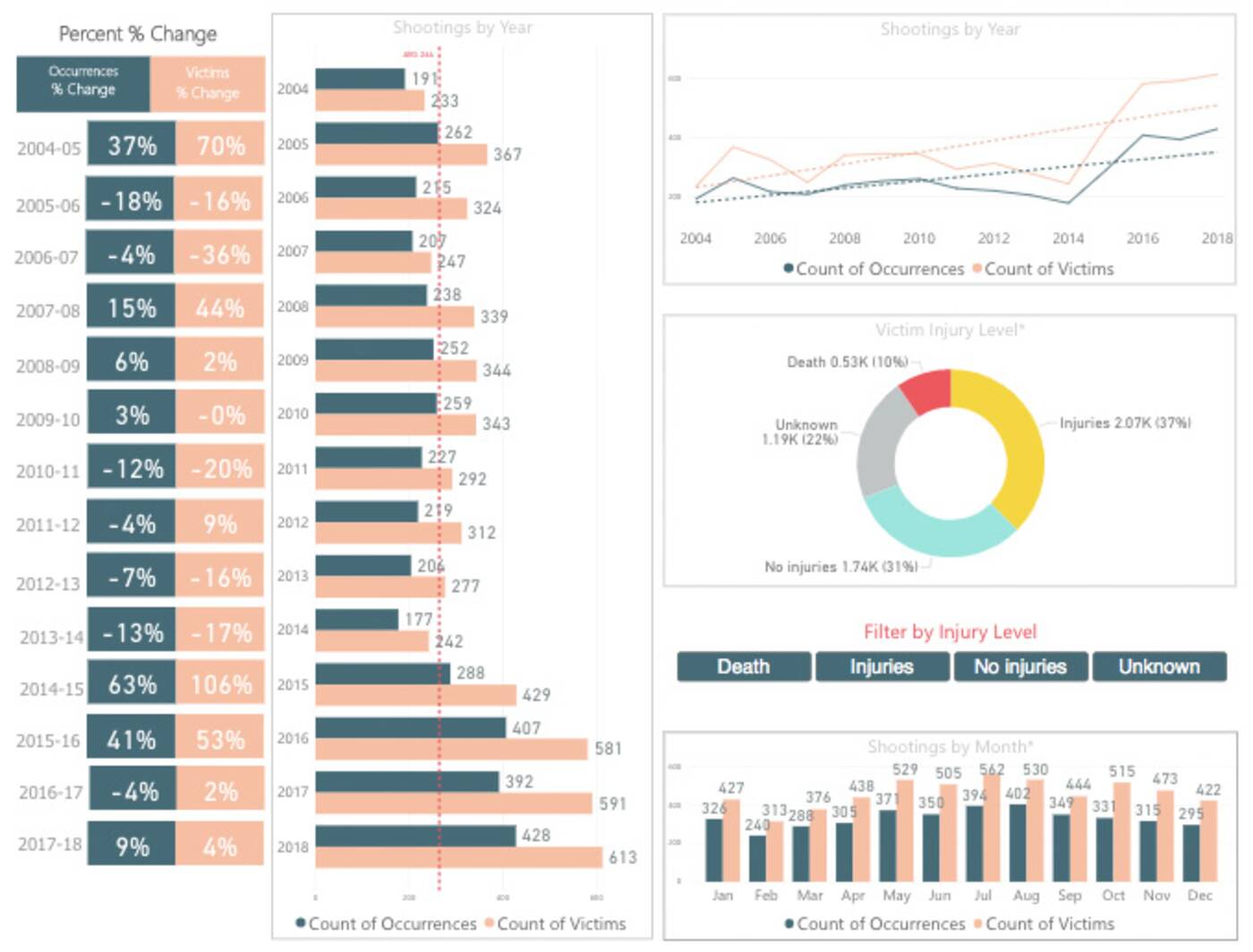 Toronto has seen an explosion in the number of both shooting incidents and shooting victims since 2004. Image via Toronto Police.

There are also concerted efforts underway to help get guns off the streets, reduce gang activity and better protect citizens of the neighbourhoods most at risk for violent crime.

Toronto City Council voted in September to ask Canada's federal government for a national handgun ban. Mayor John Tory had previously said he would be satisfied with a city-wide ban on guns and ammunition at this point.

In August, Tory announced that Toronto Police would be getting an additional $4.5 million in federal, provincial and municipal funding to help combat gun violence across the GTA — on top of the $15 million dollar gun violence reduction plan he unveiled with Saunders in 2018.

I want to thank the provincial and federal governments for joining with the City of Toronto to take immediate action. pic.twitter.com/GbCKYms4Pe

The city's most-recent plan to address the spike in shootings involves, among other things, an "11-week, intelligence-led operational plan."

Saunders said in a new release this past August, not long after yet another deadly summer weekend, that the new plan would "focus on street gangs and reducing violent crime, and firearm-related offences."

Let's hope it starts to work before 2019 is through and we set another new record that nobody wants.

It's going to soon feel like 34 C in Toronto

Stores in Toronto continue to board themselves up to prevent looting