This is why Toronto doesn't have enough protected bike lanes

There's no questioning it: protected bike lanes make our city roads safer for both cyclists and drivers. So why aren't there more of them in Toronto?

One of the most notable additions has been the 2.4-kilometre strip of Bloor between Shaw and Avenue, which, according to a City study, has seen an exponential increase in ridership and a decrease in collisions, since it was implemented in 2016.

The same goes for the western stretches of Richmond and Adelaide, which were only made permanent a couple of months ago, despite being built nearly five years ago. 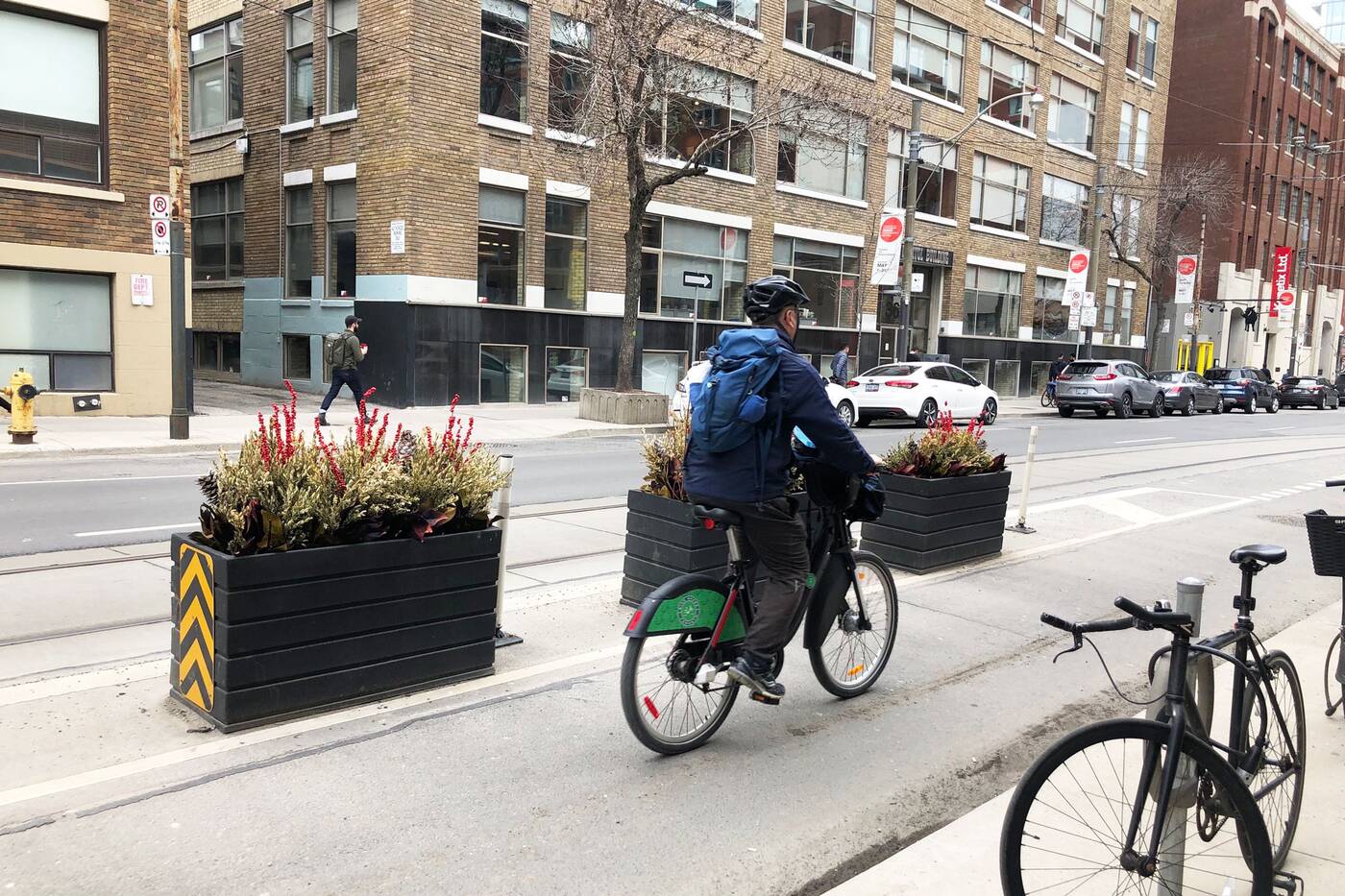 The protected bike lane on Adelaide is separated from traffic by planters. Photo by Tanya Mok.

The only other separated bike lanes (or as the City calls them: cycle tracks) are few and far between, including on Simcoe, Sherbourne, parts of Wellesley East, and Woodbine Ave.

As for car-centric, suburban areas like Scarborough, where the lack of infrastructure has seen a disproportionate number of pedestrians and cyclists struck and killed, there have been zero additions.

"It’s been far too slow, with no progress in the last year," says Sarah Bradley, the Communications Manager of the city's biggest cycling advocacy group, Cycle Toronto.

"There doesn't seem to be much accountability."

According to Bradley, Toronto's streets are ripe with opportunities for more protected bike lanes, including on the Danforth just east of the Viaduct, extending the existing Bloor Street lane, or in major corridors like Jane Street, Kipling, and Sheppard Avenue.

We can look to cities like Vancouver, which had zero protected bike lanes downtown a decade ago, but has transformed into an impressive network of separated routes that goes uninterrupted for miles. 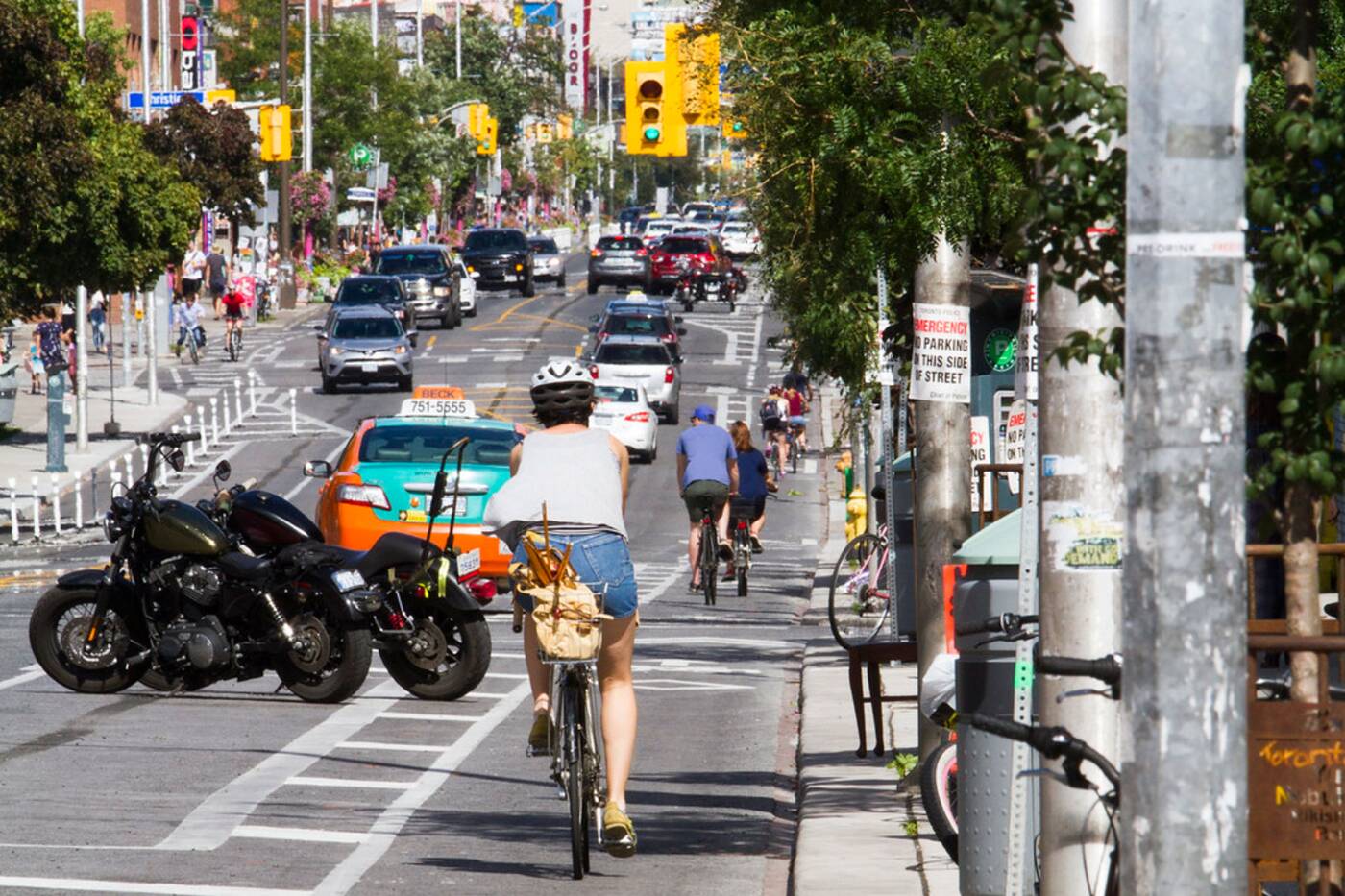 The bike lane on Bloor is separated from traffic by a mix of bollards and on-street parking. Photo by Jeremy Gilbert.

Torontonians, for the most part, seem to support the idea: a poll of 800 residents last year showed that both drivers and bikers were in favour of more protected bike lanes, especially given the record-breaking number of road deaths in the city last year.

But the City says that installing new protected bike lanes will come at a cost to Toronto drivers.

In order to move forward with any new projects, Holmes says planning and designing undergoes a process including traffic analysis, engineering, consultations, and pending City approval.

But according to Bradley, long-drawn bureaucracy doesn't justify the slow uptake of better bike lanes.

In the same number of years since Toronto implemented its 10-year plan, Montreal has already built 90 kilometres of painted and protected bike lanes in its $15 million investment to improve bike culture.

And while bollards (the flimsy white flexiposts that often get knocked down by overzealous vehicles) aren't the ideal option, they're better than nothing when it comes to creating safer environments for cyclists.

"There is a huge sense of urgency...but due to the way things work in City Hall, we've seen little to no progress in seeing those things implemented," says Bradley. "There's a lack of political will city-wide."